I’ve told the heartbreaking story before of my grandfather Isadore’s little sister Betty Goldschlager.  After sailing alone from Iasi, Romania, just thirteen years old, she arrived at Ellis Island on April 4, 1910, expecting her father Moritz, my great-grandfather, to meet her at the boat.  What she did not know was that her father had died the day before, April 3, 1910, from tuberculosis, just eight months after he himself had arrived in New York.  Betty was detained for a day at Ellis Island until her aunt, Tillie Strolowitz, could meet her and have her discharged.  Only then could Betty have learned that she had missed seeing her father alive by just one day. 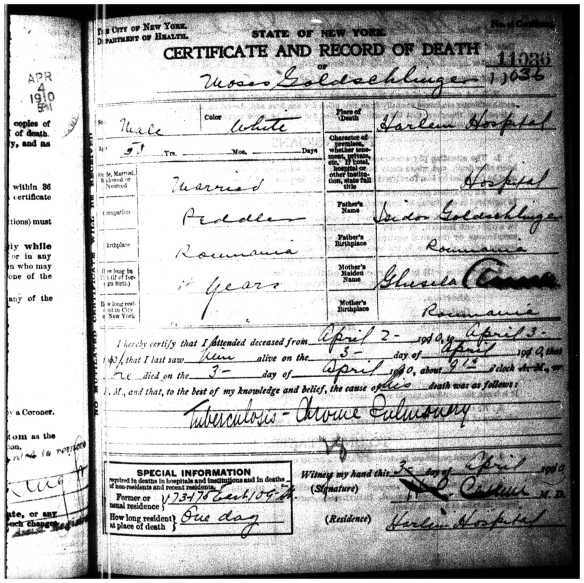 But Betty Goldschlager survived and in fact thrived in the United States.  She married Isidor Feuerstein in 1921, and they had two daughters, my mother’s first cousins.  Betty’s grandson Barry shared this photograph of his parents’ wedding in 1950.  My great-aunt Betty is standing to the far left.

When I look at this photograph, I marvel at the fact that that little girl, who sailed across the ocean by herself and then arrived only to learn that her father had died, somehow had the strength to endure all that and adapt to a foreign country and make a good life for herself, her husband, and her children.

1 thought on “Family Wedding: My Great-Aunt Betty Goldschlager Feuerstein and Her Children”