My mother has often spoken about how sad she was when her family decided to move from Brooklyn to the Bronx when she was about twelve years old.  There were many reasons she was upset.  For one, she had to leave her dog Sparky behind.  That broke her heart, and she still can’t talk about it without getting emotional. 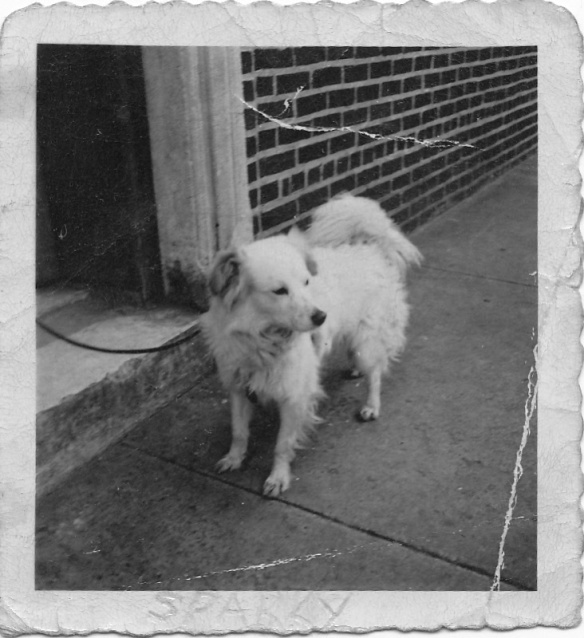 But also she had to leave her best friend Beatty behind. Beatty lived in the same four-family house at 1010 Rutland Road in Brooklyn; she lived right down the hall from my mother.  They had been close friends all through childhood, and although they tried to stay in touch after my mother moved, back in the 1940s that was not at all easy.  Phone calls were expensive, and the trip from Brooklyn to Parkchester in the Bronx was a long one, especially for two young girls.  So over time, they lost touch.

Not too long ago my mother asked me if I could find Beatty.  She knew her first and last name from when she’d last seen her over 70 years earlier, but she had no idea where she was living or whom she might have married.  I tried to find her, but with so little information I had no luck.  If Beatty had married, it was after the last year of the publicly available NYC marriage index (1937).  The only information I could find related to her siblings, who had passed away.

So you can imagine how excited I was to receive a message on the blog last week from Beatty herself.  She was looking for my mother after seeing her pictures and childhood name on the blog.  I contacted Beatty, and I called my mother.  And I gave them each other’s contact information, and now they are reconnected after over 70 years.  I get the chills (and a warm feeling) whenever I think about it.

One of the stories my mother shared with me was about Passover at Beatty’s house.  Her father led the seder in a very serious way, and as many of us know, a traditional seder can get quite long and quite boring, especially for young children.  To keep themselves from misbehaving and talking, my mother and Beatty would braid the fringes on the beautiful tablecloth that adorned the seder table.  When my mother shared this memory with Beatty, she said that she also had shared that story with her children.

The tablecloth still exists, and even more remarkable, the braids made by my mother and her best friend Beatty are still there as well.  Here is the photograph to prove it. 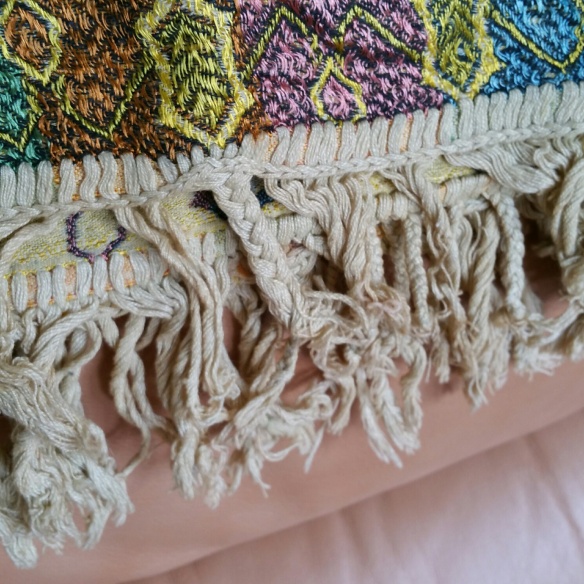 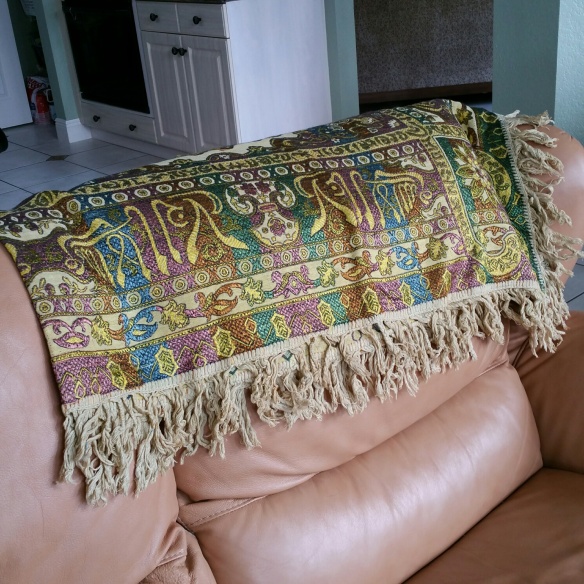 My mother was once my Girl Scout troop leader, and one of the songs we sang had the lyrics, “Make new friends, but keep the old.  One is silver, and the other gold.”  My mother and Beatty certainly know the truth of that message.