My great-grandfather Isidore Schoenthal came to the United States in 1881; he arrived in New York City on September 3 of that year on the ship Rhein when he was 22 years old.  I had known that he came from Germany, but not exactly where.  His death certificate said he was born in “Celand, Hess, Germany,” and from various other sources about him and his siblings, I concluded that the town where he was born was in fact Sielen, a small town in the Kassel district in the Hesse region of Germany.  Today’s post will focus on what I’ve learned about Sielen, the home town of my Schoenthal ancestors.

It was not that easy to find out very much about Sielen.  The town is so small (510 inhabitants as of 2011[1]) that it doesn’t even have a Wikipedia entry.  The closest major city is Frankfurt, and it is over 200 kilometers away, as are Dusseldorf and Cologne.  From what I can see on Google Maps, Sielen is surrounded for miles and miles by farmland.  The closest town is Trendelburg, which is about four kilometers away. It merits its own Wikipedia page, though that entry is all of three sentences and tells nothing of the history of the town.

Wikipedia reports that the population of Trendelburg was over 5000 people as of 2011, based on this website.  But according to the town’s official website, that number reflects not just the village of Trendelburg itself but the neighboring towns, including Sielen.  Trendelburg proper has just over 1100 residents.   Sielen has 552. Sielen is now considered a district within the larger town of Trendelburg. From the Trendelburg official website, I was able to learn some information about the history of the town, though relying on Google Translate makes reading the German always somewhat bewildering.  Assuming I am reading most of the general information correctly, the history of Trendelburg as a separate entity began when a castle was built there in the 13th century by Konrad the III, Schoeneburg .  The location was already an important trade center for that region as it was close to a good fording spot on the Diemel River.   Over the next several centuries, the castle was used for many different purposes: a hunting lodge, the offices of the Prussian Forestry Department, and today as a privately-owned hotel and restaurant.

The hotel’s website includes some more detailed history of the castle:

With many twists and turns, the Diemel River meanders towards the Weser River. Right by Trendelburg Castle, there is a sharp bend around a rocky ridge which the locals called “Trindirberg” many years ago, probably naming the “mountain” after the village Trende, at the time situated to the west of the ridge but now completely vanished.

Sometime before 1300, Konrad the III of Schöneberg constructed a castle on this “mountain” to protect the main road from Kassel to Bremen. The settlement outside the castle also dates from this period.

Around 1305, Landgrave Heinrich I and the Bishop of Paderborn each purchased one half of the castle. The part belonging to Hessen was a Paderborn fief; the town’s official representatives were the Stoghusens, who lived in the castle for four generations.

In 1443 and 1456, the fortifications were renewed following serious fires. After their reconstruction, Trendelburg Castle was also changed, taking on the shape you see today. The fortifications were extended by a 38 metre high keep with four bretèches and a curtain wall in the shape of a pentagon with four small round towers. In the living quarters, which were erected in the 15th and the 17th century respectively, the remains of a late Gothic chapel with ribbed vaults have been preserved; the Trendelburg register office now uses this space for its civil wedding ceremonies.

In 1901, military man Oberst Adalbert von Stockhausen, in all likelihood a descendant of the Stoghusens of old, bought the castle.

Taken over by the Dr. Lohbeck Group in 1996, the castle’s long-term future was secured by its conversion into a hotel for discerning visitors.

According to the hotel’s website, this is the castle where Rapunzel lived and let down her hair.  There is even a weekly “re-enactment” of this fairy tale at the castle.

The Trendelburg official website also contains some information about the history of Sielen itself. The village is bordered on one side by the Diemel River and surrounded by limestone hills. According to the website, a stone ax found in Sielen dated back to 6000 years ago, and a cemetery back to 1000 B.C.E.  A mill dating from 1243 remains as a ruin.

Despite the tiny size of the Jewish community, there was a synagogue in Sielen from about 1817.  Originally a home owned by Moses Herzbach was used for prayer services, but in 1817, seven Jewish families sought permission from town officials to build a synagogue as an addition to Herzbach’s home.  Permission was granted, and Herzbach financed the construction of the synagogue. 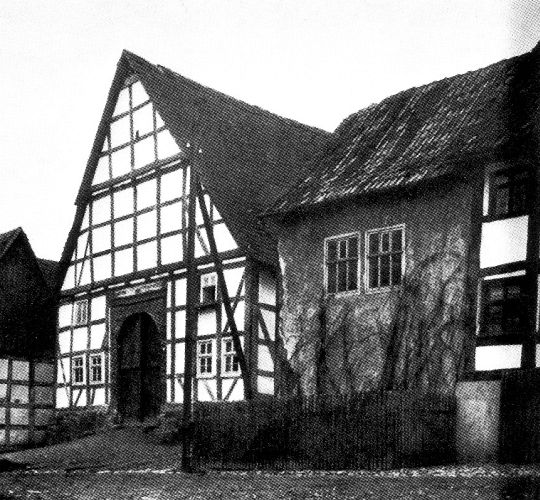 There was also a Jewish school and a cemetery.  According to Alemannia-Judaica, at first Jews were buried in a cemetery in Trendelburg, but around 1846, a separate cemetery was established in Sielen on the road between Sielen and Trendelburg.  There are 26 graves there, including that of my great-great-grandfather Levi Schoenthal, as I will discuss in a later post. 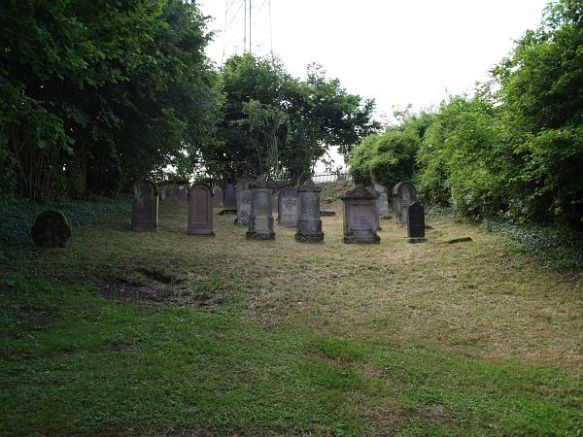 Down the road in Trendelburg there was also a Jewish community with its own synagogue, cemetery, and school.  That community dates back to 1676, but also was quite small.  In 1731 there were 21 Jewish residents; the Jewish population peaked in 1827 at 31, but was down to just 12 by 1895.  There was a Jewish school in Trendelburg, where my great-grandfather’s brother Henry Schoenthal was a teacher before he immigrated to the United States.  There was also a mikveh, the ruins of which were discovered in 2001 during renovations and which can now be seen as a tourist attraction.  By Hitler’s time, there were only a handful of Jews remaining in Trendelburg, and they died in the Holocaust. 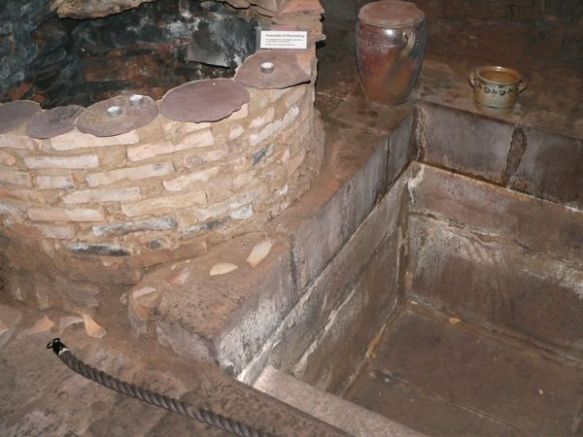 How did these Jews make a living in these small towns where the number of Jewish residents was so small? What were their lives like? I can’t say that I am surprised that my great-grandfather Isidore Schoenthal and almost all of his siblings left Sielen by the 1880s; my great-grandfather had ten siblings who survived to adulthood.  What kind of opportunities could they find in this small, rural town? Probably very few, and so they left and ended up all over the United States: Pennsylvania, New York, New Jersey, Colorado, Arizona, California, Illinois, Ohio, Florida, and so on.  They learned English, they worked hard and survived, and they became Americans.    Like Joseph and Bessie Brotman, Isadore Goldschlager, Bernard Seligman, John Nusbaum and Jeanette Dreyfuss, and Jacob Cohen and Sarah Jacobs, they took the risk of leaving behind what they knew so that they could make a better life for themselves and their descendants.  How fortunate I am to be one of those descendants.

13 thoughts on “The Schoenthals: Where They Came From”