Finally I have come to the youngest of my great-grandfather’s siblings, the only one born after he was, his younger sister Rosalie.   Her story is even more tragic than that of her brother Jakob.

Rosalie was born in Sielen, Germany, in 1863, five years after my great-grandfather Isidore.  As I wrote earlier, she came with her mother and Isidore to the United States in 1881 when she was eighteen, but returned to Germany to marry Willy Heymann of Geldern, to whom she was apparently engaged even before leaving Germany. They were married on December 8, 1884, in Geldern. 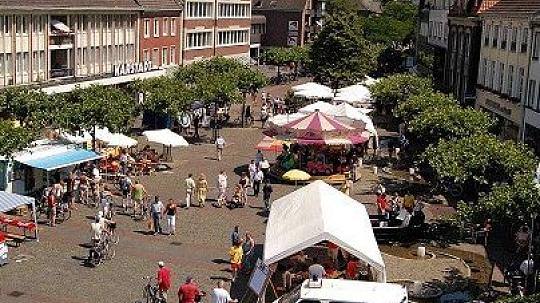 I was fortunate that there were numerous sources available that provided me with information about Rosalie, Willy, and their family.  Two German websites had biographies of Willy and Rosalie Heymann and their children.  One, a site about the Geldern Jewish community, indicated that Willy and Rosalie had had six children, although it only named two of them, Helene and Hilda.  A second website containing information about the Heymann family was the Steinheim Institute site, which confirmed the fact that there had been six children and provided the names and birth years of all six as well as other pertinent facts that helped me with my research of Rosalie’s children.

From these two sources, I learned that Willy was a horse trader like his father Levi Heymann and was born in Geldern in February, 1857.  Geldern is about 150 miles from Sielen, so I’ve no idea how Rosalie and Willy knew each other; perhaps their fathers had known each other.  Willy and Rosalie settled in Geldern; their six children were: Lionel, born in 1887 and presumably named for Rosalie’s father, my great-great grandfather Levi Schoenthal; Johanna, born in 1889; Helene, born in 1890 (perhaps named for Henriette Hamberg, Rosalie’s mother), Max, 1893; Walter, 1896; and Hilda, born in 1898.

The Geldern site had a photograph of the Heymann home in Geldern, depicted below. 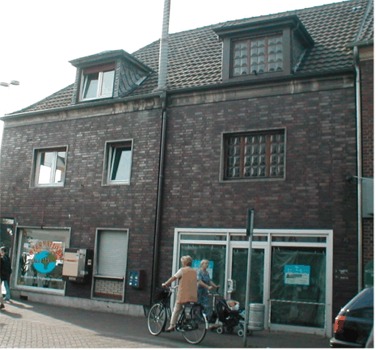 Home of Willy and Rosalie Schoenthal Heymann in Geldern
http://hv-geldern.de/images/juden/juden.htm

The Steinheim Institute site reported that Rosalie died on August 7, 1937, when she was 74 and that Willy Heymann died on January 15, 1939; it provided this description of his death:

Translated by a member of the German Genealogy Facebook group as:

After his death, Willy Heyman was brought secretly to the cemetery and buried by 14 year old Fritz Davids alone, who had returned only a short time before from the concentration camp of Dachau where he had been brought with his father after the [Kristallnacht, Nov. 9, 1938].

How would you interpret that sentence? Does it mean that Willy had died outside of Geldern and been secretly returned by this fourteen year old boy? Had Willy also been at Dachau or just Fritz and his father? Or does it mean that Willy and Fritz’s father had been brought to Dachau after Kristallnacht? Does the “he” in that last phrase refer to Willy or Fritz?  I am inclined to think that Willy was at Dachau because otherwise, why would he have had to have been secretly brought to the Geldern cemetery?

UPDATE:  Thanks to Renate Adolfs and Cathy Meder-Dempsey, I now have more information about what happened to Willy, and it is awful.  Both Renate and Cathy found a link here that describes the terrible fate of Willy Heymann.  As translated by Cathy, this is the full story:

Recently back from the concentration camp, Fritz Davids experienced, two months later, how bad the Jews had fared. There was no respect even for the dead. The Jew Willy Heymann died at the age of almost 84 years old. Since nobody wanted to bury him or could, the 14-year-old Fritz put the corpse in a wheelbarrow and at dawn wheeled it to Boeckelter Weg (street name) to the Jewish cemetery, where he, fully in dignity of the time, shoveled a grave for the old man and spoke the Kaddish. David Cain and Jacob Heymann were also buried under such humiliating circumstances.

Thank you, Renate and Cathy, for allowing me to memorialize Willy Heymann more completely. 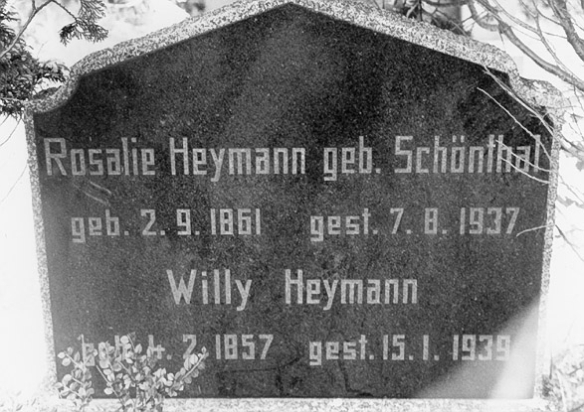 The information about Willy and Rosalie and their children was also confirmed by a third source, Juden in der Geschichte des Gelderlandes (2002), a book edited by Gerd Halmanns and Bernhard Keuck that contains information, photographs, articles, documents, and maps of the Jewish communities in Geldern and the surrounding towns.  Rodney Eisfelder from the GermanSIG of JewishGen kindly sent me a copy of page 370 from that book, which lists information about Willy Heymann and his family.  That page also provided me with numerous clues about the Heymann children.

From these sources, I knew that Lionel Heymann, the oldest child, had moved to Chicago, but I found out that before he immigrated to the US, he had left Germany for England; he is listed on the 1911 English census as a 24 year old German national, living in London and working as a hotel waiter. 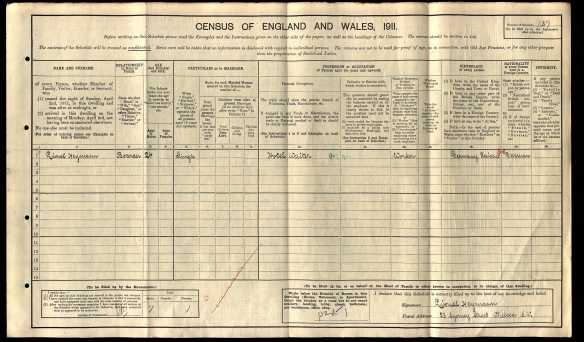 In 1912 he sailed from England to Algiers, still a German citizen, but listing his intended future permanent residence as Switzerland.  He was working as a hotel manager, according to the ship manifest. 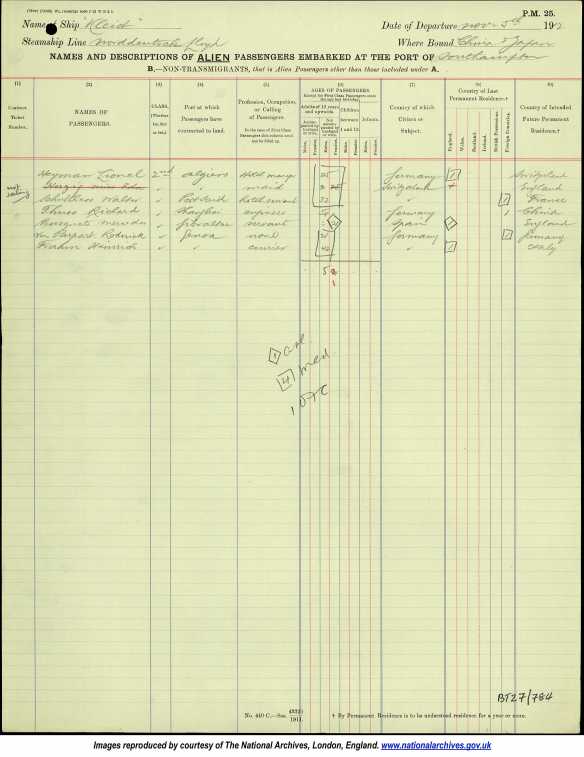 He next surfaced on a passenger ship manifest for a ship sailing from England to New York in 1924. He was still a German citizen, stating that his last permanent residence was Geldern, Germany, and listing his father “Wilhelm Hyman” of Geldern as his contact in that place.  He said that he was going to his uncle Harry Schoenthal of 260 Riverside Drive in New York City.  At first I was thrown by this, but then realized he must have meant Henry Schoenthal, his mother’s oldest brother, who was in fact living in New York at that time.  Lionel indicated on this manifest that he intended to settle permanently in the United States.

By 1928, Lionel was living in Chicago and working as a waiter, as reflected on this October 30, 1928 passenger manifest.  He was still an alien resident, listing his father again as his contact in Germany, but providing his Chicago address as his permanent address.  He was returning from Germany, so he probably had been visiting his family back home. 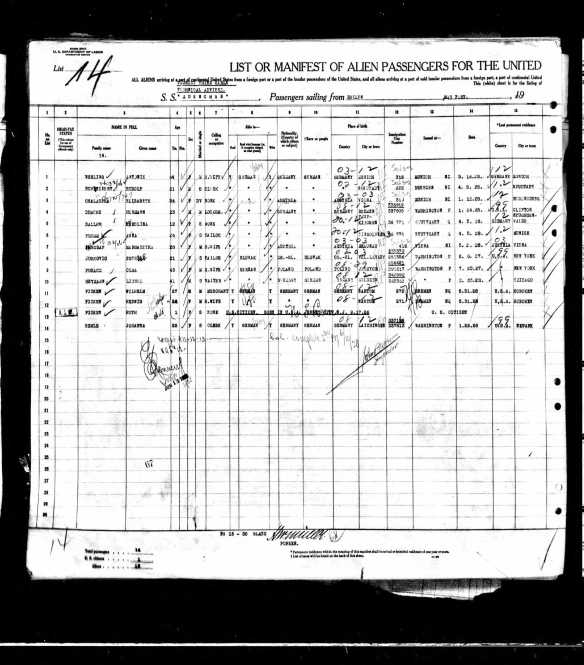 Interestingly, Lionel’s younger brother Walter had arrived in the US just a few months earlier in June, 1928.  This was consistent with the information in the above-mentioned  sources—that is,  that Walter also had ended up in Chicago. On the ship manifest for Walter’s arrival it reports that Walter was a cook, that he was 32, that his last residence had been Cologne, Germany, and that he was heading for Chicago where his brother Lionel resided.

After searching the 1930 census as many ways as I could, including using Lionel’s address as given on both the 1928 ship manifests and his 1933 naturalization papers (1411 Winnemac Avenue), I concluded that the census enumerator had completely missed that address.  The listings include 1409 and 1413, but not 1411.  Just my luck.

Although I could not find Lionel on the 1930 census, Walter is listed on that census, living as a lodger in Chicago and working as a chef in a hotel.  He was then 34 years old and had been in the US for two years and had filed his papers for citizenship.

As mentioned, Lionel became a naturalized US citizen in 1933. 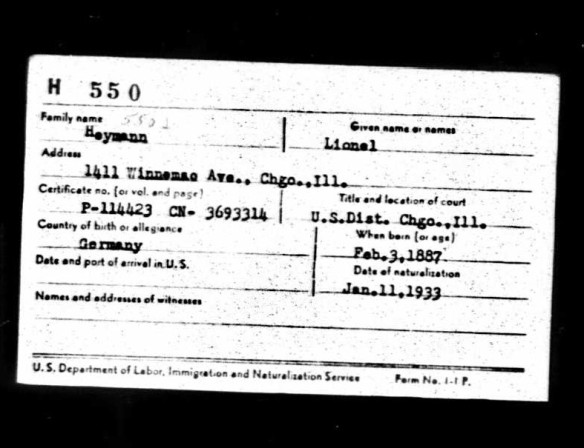 According to the Cook County, Illinois Marriage Index, Walter Heymann married Lucie Goldschmied on March 16, 1934.  Lucie was born in Frankfurt, Germany, on February 11, 1908, the daughter of Miksa (later Americanized to Michael) Goldschmied, a Hungarian native, and Bertha Hirschberg, a native of Eschbach, Germany.  Lucie first came to the US in 1928, according to the 1930 census, which has her listed as residing at the Moraine Hotel in Highland Park, Illinois (a suburb of Chicago), where she was employed as a pantry servant.  I assume that this was the same hotel where Walter was employed as a chef.

The Chicago Tribune described the history of the Moraine Hotel in an article published on May 11, 1986:

In the early years of this century, the Hotel Moraine-on-the-Lake sparkled as a North Shore glamor resort. Built on 15 acres overlooking Lake Michigan in Highland Park, the hostelry opened in 1900 with 140 rooms.

The Moraine immediately caught the eye of the rich and famous. Glancing through old guest registries (now in the Highland Park Historical Society), you`ll spot some well-known Chicago names–the Marshall Field family, the Swifts, the Pullmans, the Florsheims, and many others.

Guests came from all over the U.S. and even from abroad. Some of the more affluent even traveled with their chauffeurs and maids.

…   The heyday of the Moraine continued into the 1920s, when the increasing number of guests necessitated additions to the hotel. Then came the Depression and even the Moraine was not spared–it declared bankruptcy in 1937.

By 1939, the once-grand hotel had become a barracks for military officers. But sunnier days were just around the corner. In 1942, the hotel was purchased, rehabbed, and reopened. It regained some of its former glory and operated until 1969, when the last guest checked out.

In 1972, the Hotel Moraine-on-the-Lake itself checked out. It was torn down and the site was turned into a public park. 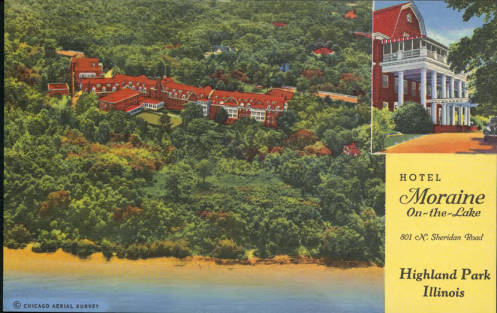 If this is indeed where Walter and Lucie were working when they met, they were certainly working in quite a grand place.

Max Heymann, the middle brother, was still back in Germany during this period, but he finally came to the US with his wife Frieda and their eleven year old son Klaus on January 7, 1939, escaping from Nazi Germany.  They had been most recently living in Essen, Germany, where Klaus was born.  Max listed his occupation as a merchant, his father Willy Heymann as the person he was leaving behind, and his brother Lionel as the person he was going to in the US.  I was surprised to see that Lionel was then living in Detroit, not Chicago.

By 1940, all three of the sons of Rosalie Schoenthal and Willy Heymann were living in Chicago.  According to the 1940 census, Lionel was living in the household of his brother Max in 1940, apparently having returned from Detroit.  Lionel was now the head waiter at a hotel, according to the census.  Max was a salesman for a paper box manufacturing company. Lionel, Max, Frieda, and Klaus were living at 1441 Belle Plaine Avenue in Chicago.

Walter and his wife Lucie as well as Lucie’s recently arrived parents, Michael and Bertha Goldschmied, were living a mile away from Max and Lionel at 3325 North Paulina Street in Chicago.  Walter was continuing to work as the cook in a hotel, and Lucie was working as a waitress, perhaps in the same hotel restaurant.  Lucie and Walter did not have any children. 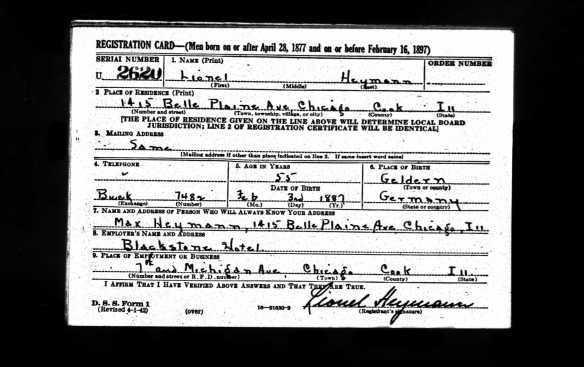 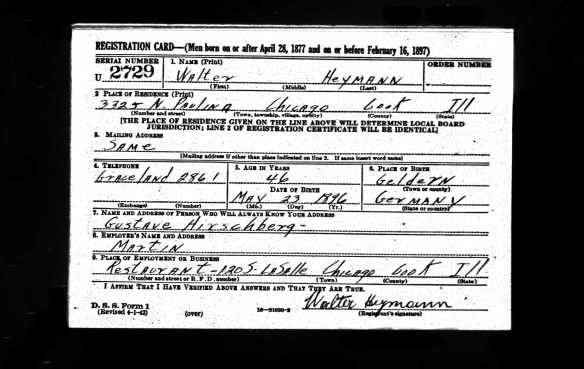 Max died a year later on May 31, 1943.  He was only 49 years old.  Walter died ten years after his brother Max on August 14, 1953; he was only 57.  Did the stress of uprooting themselves and worrying about their relatives back home contribute to their early deaths? I don’t know.

Lionel, the oldest brother, lived the longest.  He died on November 29, 1966, when he was 79 years old.  I was fortunate to find both a death notice and an obituary for Lionel (but none for his brothers).  Those two records revealed more about Lionel than I’d been able to glean from the passenger ship manifests or the census records.  He’d had a whole other life not reported on those documents.

14 thoughts on “The Little Sister Who Went Back Home: Rosalie Schoenthal, Part I”