As I wrote last time, Mathilde Gross Mayer (known sometimes as Mathilde Mayer-Gross) lived a long life—a hundred years that spanned two centuries (1869-1969) and two countries—Germany until she was 68 and then the United States for the last 32 years of her life. Her autobiography, Die Alte and Die Neu Welt, records the story of her remarkable life.  I have read the small portion of her autobiography that I had translated by Ute Brandenburg.[1]  I hope to read the book in its entirety once I know enough German to make that possible.

But from the excerpt I’ve read in translation along with information I obtained from other sources, I have learned quite a bit about Mathilde’s family and her early life in Germany.

I have written about Moritz and his family in several places.  His son Bernhard (later Bernard), my great-great-grandfather, was one of the Seligmann brothers who came to the United States and settled in Santa Fe where they established the important trading business known as Seligman Brothers.

Moritz Seligmann, Courtesy of the Family of Fred and Ilse Michel

I have also written about Martha and how I discovered, thanks to the family tree discovered by my cousin Wolfgang, that in 1824 she married her first cousin (and also my cousin) Benjamin Seligmann, son of Hirsch Seligmann, who was Jacob Seligmann’s brother.  Martha and Benjamin lived in Bingen, Germany, where they had seven children: Siegfried (1824), Emilia (1826), Hermann (1828), Karolina (1831), Ferdinand (1836), Lambert (1838), and Bertha (1841).

The facts below are all based on Mathilde’s book, except where noted.  All quotations are from the translation by Ute Brandeburg of Chapter 2 of Mathilde’s book.

Benjamin Seligmann was initially in the scrap metal business and then later in the money changing business, but according to his grandson Isidor Gross (who contributed to his sister Mathilde’s book), Benjamin was actually more academically inclined by nature.  It was his wife Martha and their sons Lambert and Ferdinand who really ran the business. Benjamin and two of his sons, Lambert and Hermann, also served as accountants for the Jewish congregation in Bingen.

Isidor wrote about his uncle Ferdinand that he had traveled to Paris and when he returned, he brought home a top hat.  “He would promenade around Bingen, wearing this hat and using a skinny walking stick, just as he had in Paris.” (DADNW, p. 10).  As a result, he earned the nickname “Hat,” and Isidor and Mathilde referred to Ferdinand as “Uncle Hat.”

After their father Benjamin died in 1862, his sons Ferdinand and Lambert took over the business, which was eventually renamed “Ferdinand Seligmann.”  Neither Ferdinand nor Lambert ever married, and they lived together in Bingen and were known as Die Herren, or The Gentlemen.  A third brother, Hermann, also never married; he was for a time involved in the business, but ran into some financial troubles and was bought out by Ferdinand.

The oldest child of Martha and Benjamin, Siegfried, married his first cousin, Carolina, who was a daughter of Moritz Seligmann, my three-times great-grandfather.  Siegfried and Carolina had seven children together, including Emil, the one presumed to have recorded the family tree I discussed here.  Emilia, the second child of Benjamin and Martha Seligmann, married Salomon Lorch and had four children. Karolina Seligmann (Benjamin and Martha’s daughter, not the one who married Siegfried) married Sigmund Marx; I don’t have any record of children born to that couple.

Bertha Seligmann, the youngest child of Benjamin and Martha and the mother of Mathilde and Isidor, married Bernhard Gross on June 30, 1868.  Bernhard was the son of Wolfgang Gross and Fanny Nathan, who lived in Gau-Bickelheim where Wolfgang was in the wine business, working with his sons Bernhard, Moses, and Julius.

The marriage contract between Bertha Seligmann and Bernhard Gross is included in Mathilde’s book and reveals the contributions that each side made to the marriage. It is quite apparent that this couple came from families of some means.

Bertha brought clothing and personal items worth 850 gulden and house furnishings worth 350 gulden to the marriage as well as 2000 gulden in cash.  Her mother also made a gift of 3500 gulden to the couple (to be deducted from Bertha’s inheritance). Bertha’s brother Siegfried promised to pay the rent on the couple’s home in Bingen for two years, or a total of 260 gulden.

Bernhard also contributed to the marriage.  He brought 300 guldens’ worth of personal items and clothing and 418 gulden’s worth of home furnishings.  His parents provided a gift of 2000 gulden to the couple (also to be deducted from their son’s inheritance).

When they married, Bertha and Bernhard moved to an apartment in Bingen where less than a year later their first child, Mathilde, was born on April 14, 1869.  She was followed by her sister Anna a year later, her brother Wilhelm in 1872, and then her brother Isidor in 1873.  By the time Isidor was born, the family had moved to a house of their own.  The prior owner, a baker, continued to occupy the first floor, which he used for his business, and a police officer lived on the third floor.  Isidor described the house as “a large building with a passageway to Eselgasse, where the driveway was located.  The courtyard and back buildings offered us children much space to play.” DADNW, p. 16  A sixth child was born to Bertha and Bernhard in March 1876, a son Karl. 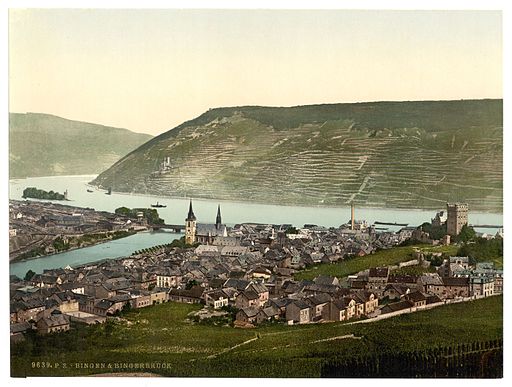 Mathilde described her father Bernhard as “a highly respected citizen who had no enemies, did much for the common good, and helped however and wherever he could.  He supported the congregation in word and deed, and whenever possible he went to Saturday services.” DADNW, p.18  She continued:

Father was a hardworking, ambitious businessman.  He was well liked with the customers.  Nearly every morning, he would head out early to the train station, his bags heavy with wine samples.  But he never left the house without first bringing a little sample of his breakfast, bread rolls with egg, a “morsel.” As he called it, to the children’s bed….. Although he was often serious and judicious, he did have a cheerful disposition and was always in a good and light-hearted mood when attending social and family events….Despite his occupation, which had him taste alcohol on a daily basis, he always sought moderation in drinking.  He could not tolerate more than two or three glasses of good wine; then he would become exceedingly merry, climb onto chairs and tables, stretch out his arms, and exclaim: “My dear friends, this is the world!”

Mathilde’s portrait of her mother Bertha Seligmann Gross, is quite different:

She was serious and strict, with herself as well as others.  She rarely participated in fun and laughter. … Mother strove to manage the household with as much frugality as possible.  The boys often came home with holes in the bottoms of their pants and the knees of their socks.  [Heels?] Sometimes there would be a pat on the backside.  Then [I] would have to spend [my] Saturday evenings and Sundays mending the work day clothes and darning the socks instead of reading or going to visit [my] girlfriends. ….  There would many weeks where I had to polish the metal stove pipes with scouring paper until they shone before I could return to school at 2 o’clock.  Mother was a heavy-handed person who did not know how to make life easier for herself and others.

Mathilde also wrote about her brothers that they were “wild and spunky.  They were always up for pranks, didn’t spend much time in the books, and went outside the moment Mother looked the other way.”  DADNW, p. 18.

Obviously as the oldest child and daughter, Mathilde had a lot of responsibilities, but she did have some happy childhood memories.  She enjoyed ballroom dancing lessons, and she and her sister Anna spent school holidays with her mother’s brother Siegfried Seligmann and his family in nearby Mainz.  She also spent some time in 1885 when she was sixteen living with her Uncle Hat (Ferdinand) in Nancy in Alsace, but was not happy going to school there and returned to her family in Bingen.

The family of Bertha and Bernhard Gross moved a few times in Bingen to accommodate their growing family.  The second home was bigger, but needed work. Isidor wrote, “There was no gas, no plumbing, no electric light, and the toilets were very primitive.  They were outside the apartment, which was quite unpleasant in the winter and in bad weather.” DADNW, p. 17  Mathilde also described the house’s shortcomings: “only kerosene lamps that needed to be cleaned every morning, no warm water, and only much later running water—before that one had to fetch water in pails from the pump in the courtyard.  It was a lot of work to keep three or four stoves going in the wintertime.” DADNW, p. 20

On April 11, 1888, Mathilde married Marx Mayer, a man one of her aunts had introduced to her.  On the Judische-Bingen site I found Mathilde’s description of her husband:

My husband Marx was a cheerful person, a life-affirming character, who knew how to make friends everywhere.  He was a good dancer, loved to dance, and we seldom missed seeing the New Year begin at the New Year’s ball in Caecilienverein.

Mathilde went on to describe the yearly three-day carnival celebration in Bingen, which Marx enjoyed greatly, often staying out until four in the morning.[2]

Mathilde and Marx had three children between 1889 and 1896: Wilhelm, Ernst, and Anna. Mathilde’s siblings also married in these years.  Her sister Anna married Willhelm Lichter; her brother Wilhelm married Sophie Hirsch.  Isidor married Clara Emmerich, and Karl married Agnes Neuberger.  They all would have at least one child.

With their children all grown, Bertha and Bernhard decided to purchase another home at Mainzer Strasse 16 in Bingen, though it needed substantial renovations.  Bertha and Bernard moved into the house in late 1898.  Sadly, they only lived in the house for a few years because on November 1, 1901, both Bernhard and Bertha were killed by carbon monoxide poisoning that had resulted from some faulty renovations being made on the house.  Bernhard was only 61, Bertha just 60 when they died.

Headstones for Bertha Seligmann Gross and Bernhard Gross in the Jewish cemetery in Bingen
http://www.juedisches-bingen.de/43.0.html

Mathilde wrote of how she learned the news of her parents’ awful death:

On that fateful Thursday morning when Emil Seligmann [son of Siegfried and Caroline Seligmann and Mathilde’s first cousin] came to get me and then told me, as we were walking, of the accident, he lead me over Schlossberg rather than through town where people already knew and would have stared at me.  I could not immediately comprehend the scale of the tragedy that had befallen us.  DADNW, p. 19.

Understandably, Mathilde was devastated.  She wrote that her father’s death “was a heavy blow that left a big void.”  DADNW, p. 19.

Thus, the new century did not begin well for the family of Bertha Seligmann and Bernhard Gross.  In fact, it was a century marked by a great deal of tragedy for the family.  Although I cannot yet read enough of Mathilde’s book to provide a reliable translation of her own words for the years that followed her parents’ deaths, I have been able to learn more about the fate of her family from other sources and will reveal what happened to them all in posts to follow.

[1] Ute Brandenburg provides professional translation services for German texts, including texts written in the old German script.  You can see her website at  https://germanscriptexperts.com/   References to translated quotes from the German version of Mathilde’s book are indicated by “DADNW” and the appropriate page numbers.  All translations of the book were done by Ute Brandenburg.

[2] Unfortunately, Google Translate’s translation of these pages is quite awful, so I am hoping to obtain a better translation.