Mathilde Gross Mayer, my distant cousin and the author of Die Alte und Die Neue Welt, had three younger brothers in addition to her younger sister Anna about whom I wrote in my last post.  In this post, I will tell what happened to the three brothers. In order to learn a little more about them, I decided to use my little bit of German (along with a dictionary and Google Translate) to try and read some of Mathilde’s book myself, in particular Chapter 4, which is entitled “Geschwister,” or siblings.  I also relied on the family biography on the Arbeitskreis Judische Bingen website  in addition to traditional genealogy sources.

Wilhelm, the third child of Bertha Seligmann and Bernhard Gross, was born on April 14, 1872, in Bingen.  He married Sophie Hirsch, who was a relative of his sister Anna’s husband, Wilhelm Lichter, and they, like Anna and her family, settled in Stuttgart. They had a son, Bernhard, born in Stuttgart in 1905; he was presumably named for his grandfather Bernhard, who had died from carbon monoxide poisoning in 1901.  According to Mathilde’s book (pp. 48-50), Wilhelm suffered from mental illness and was institutionalized for many years, dying in a sanatorium in Wurttemberg in 1928.

When Hitler came to power in 1933, Wilhelm’s widow Sophie  and son Bernhard Gross immigrated to Rio de Janeiros, Brazil, where Bernhard became a very successful and well-known physicist. He was appointed to the staff of the National Institute of Technology in Rio and eventually became the director.  He also served on various scientific committees of the United Nations and traveled all over the world serving on those committees; later, he was the director of the Brazilian National Commission of Nuclear Energy.  You can read more about his life and career here and here and here.  He died at age 97 in 2002 in Brazil.

Mathilde’s second brother Isidor, whom I’ve mentioned before for his role as a contributor to Mathilde’s book, was born on September 25, 1873, in Bingen.  He married Klara Emrich, and like his sister and her husband, Anna (Gross) and Wilhelm Lichter, Isidor and Klara settled in Stuttgart where Isidor worked as a banker. Isidor and Klara had one child born in 1903 and presumably also named for his grandfather; his name was Hans Bernard Gross.  When Wilhelm’s widow and son, Sophie and Bernard Gross, left for Brazil in 1933, they took Isidor’s son Hans with them as well, according to the Arbeitskreis Judische-Bingen website.  Hans was at that time a law student.

Isidor and Klara were not yet ready to leave Germany in 1933.  As indicated by a September, 1937 ship manifest, Isidor and Klara sailed from Buenos Aires, Argentina, to Southampton, England; the manifest shows that their last permanent residence was in Germany and that they were going to stay at a hotel in London, but that their “country of intended future permanent residence” was a foreign country outside of the United Kingdom.  (It looks like the far right column says “..o de Jan,” so I assume that Isidor and Klara had been visiting Hans in Rio.) 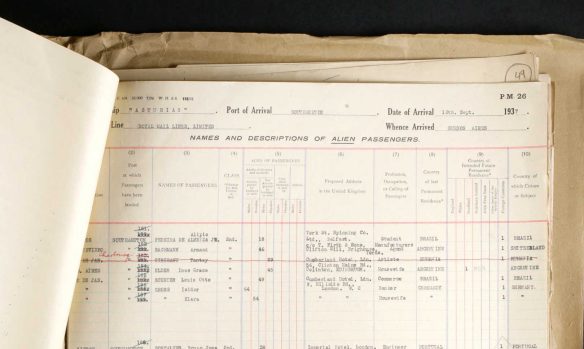 The immigration cards below indicate that Isidor and Klara moved to Brazil in June 1939: 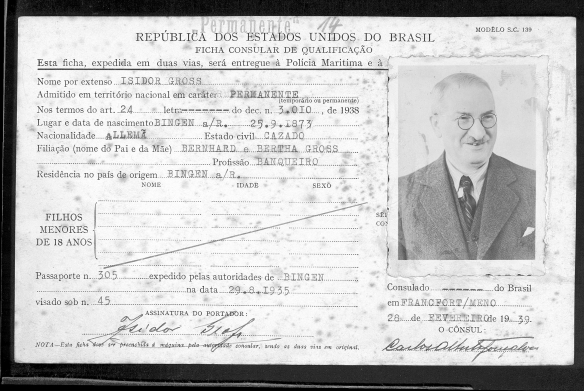 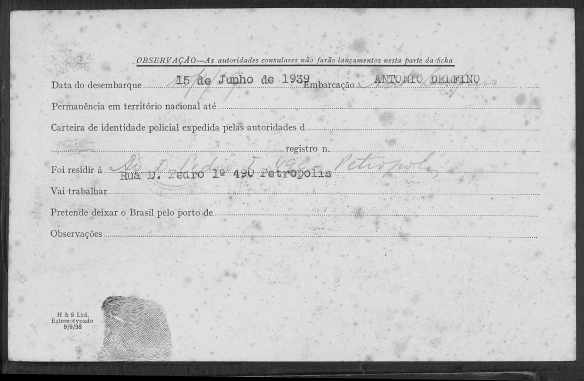 They both lived the rest of their lives in Brazil, as did their son Hans.  Isidor died and is buried in Petropolis in 1950; Klara is also buried there; she died in 1969.  Hans died in Rio de Janeiro in 1979.

(Thank you to Andre Convers of the LatAmSIG on JewishGen.org for finding the information about Klara and Isidor’s deaths and burial for me; they are listed in Egon and Frieda Wolff’s book, Sepulturas de Israelitas Il, p.100; Sophie Gross, widow of Wilhelm Gross, is listed on p. 101 and also buried in Petropolis, but her date of death says “19.5” so I assume it was partially illegible. There are also several people named Emrich on p. 100, presumably relatives of Klara Emrich Gross.)

Unfortunately, the youngest child and third son of Bertha Seligmann and Bernhard Gross was not as fortunate as his older brother Isidor or his sister Mathilde.  Karl Gross was born on March 6, 1876, in Bingen, Germany.  According to the Arbeitskreis Judische Bingen page dedicated to Karl, he married Agnes Neuberger, and they had two daughters.  Bertha was born in 1906 and presumably named for Karl’s mother, Bertha Seligmann Gross, who had died with her husband in 1901 from carbon monoxide poisoning; sadly, Bertha suffered brain damage at birth and required special care.

A second daughter, Ilse, was born in 1921, after Karl returned from service in the Germany army during World War I. He had served from August, 1914, through the end of the war and was honored several times for his service.

After returning from the war, Karl worked in the Gross family winemaking business.  Two years Hitler’s rise to power, he and Agnes decided to send fourteen year old Ilse to the International School in Geneva, Switzerland in 1935. In 1938, when she was just seventeen, Ilse left Switzerland for England.

Karl and Agnes, however, stayed in Germany to be near their other daughter, Bertha. In December, 1940, the German Reich required that Bertha be admitted to the Israelite Hospital and Sanatorium in Bendorf-Sayn, also known as the Jacoby Institute. It had been founded almost a century before as a mental institution for Jewish patients.  Its role was altered terribly by the Nazis.

During the first years of National Socialism the Jacoby Institute was left in relative peace; probably as an acknowledgement of the fact that it was an important employer for Sayn and the region. ….A circular decree issued by the Ministry of the Interior on 12th December 1940 decreed that “mentally ill Jews” were only to be accommodated in Sayn because “a cohabitation of Germans and Jews is not acceptable in any length of time” (illustr. 7). The option of concentrating all the patients in one location served as preparation of their deportation. In the course of five transports (between March and November 1942) 573 people were taken to the death camps in the East.

Bertha Gross was one of those 573 people; she was deported to a concentration camp in Izbica, Poland, where she died.

Karl and Klara Gross also were killed in the Holocaust. They were sent to Theriesenstadt on July 27, 1942, where Karl worked as a stretcher-bearer until he died on February 1, 1944.  In October, 1944, Klara was deported from Theriesenstadt to Auschwitz where she was murdered.

Their younger daughter Ilse, however, survived, and like so many in this family, she ultimately thrived. As described in her obituary, after leaving Switzerland for England in 1938, at first she worked as an unpaid mother’s helper.  After England was at war with Germany, however, Ilse, along with many other Jewish refugees from the Nazis, was imprisoned as an “enemy alien” in an internment camp on the Isle of Man, according to her obituary.

Ilse, who had been writing poetry in German since she was a teenager, began writing short stories in English while in the camp and continued her writing after she was released in 1941.  In 1948, she married Kit Barker, a British artist.  Ilse began writing under the pseudonym Kathrine Talbot and published a number of well-regarded works, including three novels, many articles, and short stories.  She died in 2006, and her obituary in The Guardian includes an extensive description not only of her life but of her work.  “Ilse Barker,” The Guardian (June 2, 2006), located here.

Thus, Mathilde Gross Mayer lost both her sister Anna and her brother Karl in the Holocaust, as well as their spouses, Wilhelm Richter and Klara Emrich, respectively; her niece Bertha also was a victim of the Nazis.  Her brother Wilhelm had died years before, so Mathilde’s only surviving sibling after 1944 was her brother Isidor, who had immigrated to Brazil along with his wife and son and Wilhelm’s widow and son and thus lived a continent away from where Mathilde was in New Rochelle, New York.

Although Mathilde was fortunate that all of her children and grandchildren and almost all her nieces and nephews had survived the Holocaust, there is no overstating the tragedy she endured—from the loss of her parents in 1901, the loss of her husband in 1934, the uprooting of her children, grandchildren, and herself from their homeland, and the cruel deaths of a number of her family members at the hands of the Nazis.

Perhaps now you can better understand why I want to be able to read her book and get a feel for the real person who endured so much and lived so long.