This was a painful post to research and write. It was made even more painful by the events in Charlottesville this past weekend. How can we still be seeing swastikas and Nazis in 2017? How do people learn to hate those who differ from them? When will we ever conquer racism and prejudice of all kinds?

In my last post, I wrote about the family of Markus Katz, the oldest son of Moses Katz and Malchen Wetterhahn. Markus died before the Holocaust, and his wife Nanny was murdered by the Nazis. Fortunately, however, their three children—Maurice, Mali, and Senta—escaped in time.

Tragically, not all of Moses and Malchen’s descendants were able to escape. My thanks to David Baron and Barbara Greve for their research and help in uncovering some of the records and facts included in this post.

Rickchen Katz, the oldest child of Moses and Amalia Katz, died of cancer in Frielendorf on September 15, 1933. Given the ultimate fate of her husband and children, that might very well have been a blessing.

I don’t know the details of what happened to the family in the 1930s, but according to the research done by Barbara Greve and reported on the Juden in Nordhessen website, Rickchen’s husband Abraham Moses committed suicide on June 13, 1940. He had moved to Frankfurt with his three daughters, Rosa/Rebecca, Amalie, and Recha. Imagine how intolerable his life must have become under Nazi rule for him to take such drastic action.

In November, 1941, Rickchen and Abraham’s daughter Rosa/Rebecca and her husband, Julius Katz, and their teenage son Guenther, were deported from Frankfurt to Minsk, where it is presumed that all three were killed. Amalie, Rosa’s sister, also was deported to Minsk at that time and is also presumed to have been killed there. I have no further record for Amalie’s twin Recha. I assume she also was a victim of the Holocaust. (All the links here are to the Yad Vashem entries for those individuals.) Thus, all of the children of Rickchen Katz and Abraham Moses were murdered by the Nazis.

Jacob M Katz, the second oldest son of Moses and Malchen Katz, had been in the US for many years by 1930, having arrived in 1908, as I wrote about here.  He had settled in Oklahoma, where in 1930 he was married to Julia Meyer and had a teenage son, Julian. They were living in Wolf, Oklahoma, where Jacob was working in a dry goods store.  According to the 1940 census, by 1935 Jacob and Julia had moved to Pawnee, Oklahoma, and in 1940 Jacob was a men’s clothing merchant there. Julia’s sister Rose was also living with them.

But by 1942 when he registered for the World War II draft, Jacob and Julia had moved to Vallejo, California, where Jacob was working for the Kirby Shoe Company.  I do not know what took them to California; their son Julian had married by then, but was still living in Oklahoma. Jacob died in San Francisco in 1956; Julia died the following year, also in San Francisco.

Lena Katz, one of the three children of Moses and Malchen still in Germany in the 1930s and their third oldest child, survived the Holocaust. Her husband Hermann Katz had died on November 2, 1929, in Marburg, Germany, but Lena and their three children—Bertha, Moritz, and Amalie—all left Germany before 1940.

Her son Moritz left first, arriving in the US on November 14, 1936.  He listed his occupation as a butcher and listed Maurice Mink, his aunt Julia’s husband, as the person he knew in the United States.  His final destination was listed as Cleveland, Oklahoma, where Julia Katz Mink (the youngest daughter of Moses and Malchen) and her husband Maurice Mink were then living.  Perhaps not coincidentally, his cousin Julius Katz, son of Aron Katz, was on the same ship, as noted in an earlier post. 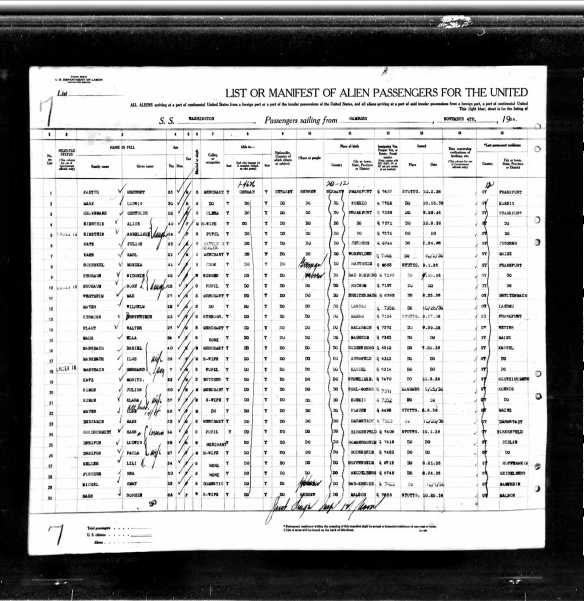 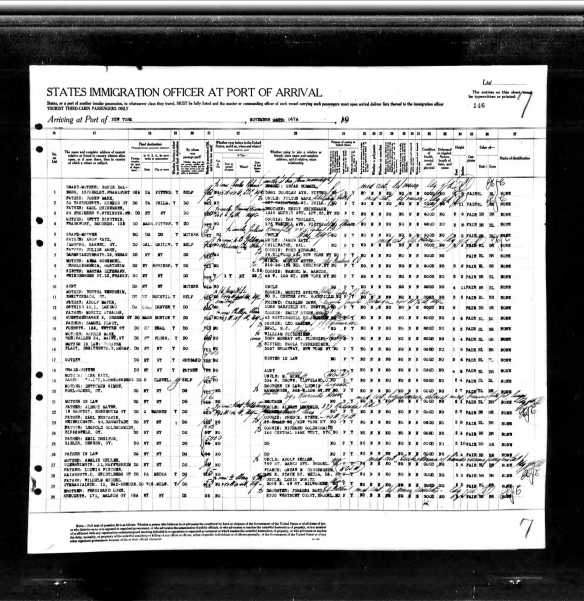 Lena and her daughter Amalie were the next to arrive; they sailed together along with Amalie’s husband Max Blum and their daughter and arrived in New York on April 1, 1938.  They all listed Jacob M. Katz in Pawnee, Oklahoma, Lena’s brother, as the person they were going to in the United States. Max listed his occupation as a cattle trader. (Lena, spelled Lina here, is listed on a separate page of the manifest from the Blum family.) 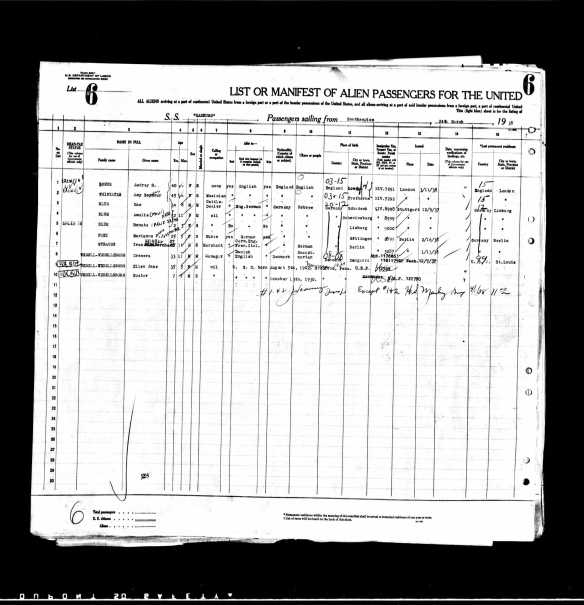 The next family members to arrive were the three young children of Lena’s daughter Bertha and her husband Siegmund Sieferheld; they were only twelve and eight years old (the younger two were twins) and sailed on a ship that seemed to have many children; it arrived in New York on February 6, 1940.  The ship manifest listed the German Jewish Children’s Aid Society as the entity responsible for receiving these children. 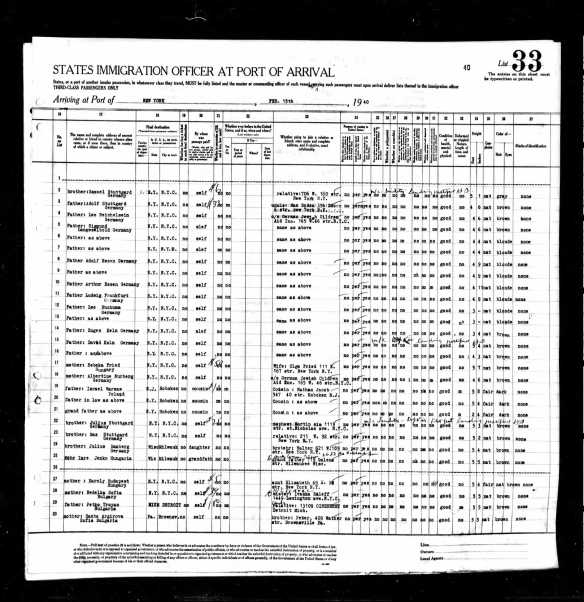 A more extensive description of the organization can be found here.  It describes the incredible work done by Americans, Jews and non-Jews, to rescue over a thousand children from the Nazis—certainly a small drop in the bucket considering the number of children who were murdered, but without organizations like the German-Jewish Children’s Aid Society, many more, perhaps including the three children of Bertha Katz and Siegmund Sieferheld, would also have been killed.

When I try to imagine the desperation of these parents—sending their young children off on a ship, not knowing whether they’d ever see them again—and the fear of those children, leaving their parents and the only home they’d ever known, I have to stop and catch my breath. I think of my seven year old grandson, just a year younger than Bertha’s twins. It is just too painful, too unimaginable, to visualize him being torn away from his parents and his parents being torn away from him.

The 1940 census shows Lena and almost all of her children and grandchildren living together in Detroit; Moritz, listed as the head of household on the 1940 census, was working as a sausage maker in a butcher shop.  Lena’s daughter Mali and her husband Max Blum were both working in a packing house. And the three young children of Bertha  and Siegmund Sieferheld, Tillie, Werner, and Henry, were also living with Lena, Moritz, and Mali. Their parents Bertha and Siegmund were still in Germany, separated from the rest of their family.

In addition, Lena’s younger sister Julia Katz Mink (listed as a widow here) was also living with them. Julia had apparently separated from her husband Maurice by 1930, when they were living separately in Cleveland, Oklahoma. Her daughter had married by 1940 and was living elsewhere. Julia died in 1971 in Montclair, New Jersey.

So as of 1940, all but Lena’s daughter Bertha and her husband Siegmund had escaped from Germany; their three young children, however, were safely with their grandmother Lena and aunt Amalie and uncle Moritz.

And then finally Bertha and Siegmund arrived on April 15, 1940.  They were sailing with two older women also named Sieferheld—perhaps Siegmund’s mother and aunt. They listed Detroit as their destination and M. Katz, Bertha’s brother Moritz, as the person they were going to. Siegmund listed no occupation.

How very fortunate Lena and her family were—all of them reunited safely in Detroit by April, 1940. Sadly, Lena died from cancer on December 25, 1941, just twenty months after having her whole family reunited in Detroit.  She was 69 years old.

Thus, almost all of the children of Moses Katz survived the Holocaust—all but the children of Rickchen, who were murdered. Even those who were fortunate enough to survive, however, must have borne some scars from what they had experienced. Words like “fortunate” and “survived” are just not the right words to use in writing about something as horrific as the Holocaust.  I find myself just unable to find any right words. I don’t think there are any.

And to think that there are still people out there, chanting for hate and waving Nazi flags.

This brings me to the end of the story of the children of Rahel Katzenstein and Jacob Katz. From Abraham Katz and Samuel Katz, who came as young men in the 1860s and settled first in Kentucky before moving to Oklahoma and Nebraska, to Jake and Ike Katz who came thirty years later as young men and started a department store business that grew to be a small empire in Oklahoma, to the many family members  who were killed in the Holocaust and those who were able to escape the Nazis in the 1930s, the Katzenstein/Katz family demonstrated over and over that they were willing to take risks, to help each other, and to work hard for success.  I am so fortunate to have been able to connect with so many of their descendants, who continue to exhibit that strong sense of family and that drive to succeed. To me that seems quite remarkable, but given the spirit of adventure and commitment to family exhibited by all the children of Rahel Katzenstein and Jacob Katz, perhaps it really is not.

44 thoughts on “The Fate of the Children of Moses Katz, Part II”