This is an update on my prior post today about Manus Katzenstein and his wife Fanny Bickhardt. A huge thank you to Aaron Knappstein and Jennifer Sanders Stern who both sent me this website about the Vohl Synagogue, a website I had not found while researching the Frankenau Katzenstein family. The website includes a detailed report on the Jews of Frankenau. Not only does it provide more information about Manus Katzenstein, but it also shed new light on his father, Wolf Katzenstein.

First, with respect to Wolf Katzenstein, husband of my cousin Mina Katzenstein, I learned that he was one of the leaders of the Jewish community in Frankenau who helped plan the construction of the synagogue there in 1862.  In 1869, the teacher at the Jewish school had moved away, and eighteen Jewish children began to attend the Protestant school where the teachers were charging seven Silbergroschen per child. Wolf, as a community leader, protested this, pointing out that the teachers were already being paid by the state, not by the families. By June 1870, a new Jewish teacher had moved to Frankenau. The Vohl synagogue site goes on to describe Wolf’s continuing actions advocating on behalf of the education of the students both in the Jewish school and in the Protestant school which some of the Jewish girls attended in the 1870s. One author described Wolf as a very stubborn man.

Wolf was considered a wealthy man; in 1870 he owned a factory and a grocery store as well as a house and barn on seven acres of land. The site reports that in 1870 there were seven people in his family, including three school age children. That is consistent with my research; in 1870 Mina and Wolf had five children, three of whom were old enough to be attending school.[1]

Regarding Wolf’s son Manus, the Vohl synagogue website also is very informative, but more confusing. First, it’s important to point out that there were two men (first cousins) of almost the same age named Manus Katzenstein in Frankenau; my Manus, son of Wolf, was born in 1863, the other Manus, son of Heinemann, was born in 1864. One or the other of the men named Manus Katzenstein got in trouble for “illegally slaughtering a pig on a Sunday.” This entry appears on the page of both men named Manus Katzenstein with the note that it is not clear which Manus Katzenstein was so charged. Some might ask why was Jewish man killing a pig? For a Christian neighbor, perhaps? At any rate, apparently Manus (whichever one it was) had the mayor’s permission, and even after the prosecutor warned the mayor against doing so in the future, it appears nothing happened to Manus. 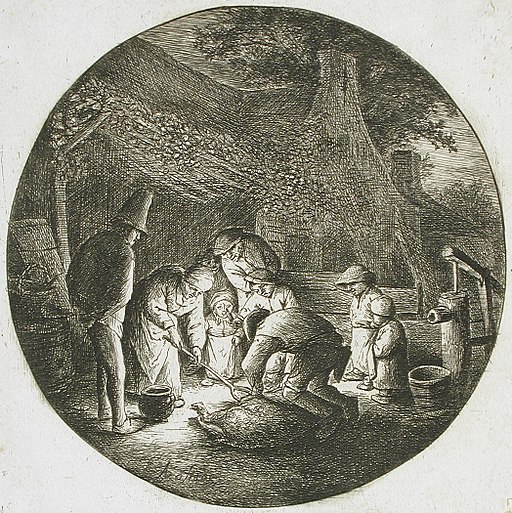 The other area of confusion regarding these two men named Manus is more important.  The website reports that Manus Katzenstein (1863, my Manus) applied for tax relief in 1896 because his son Manus was “nervous” and required expensive care. A footnote to this comment notes that it is not clear whether this child was the son of my Manus Katzenstein (1863) or the other Manus Katzenstein (1864). In any event, it does seem odd that either one would have a son with the same first name as his own father.

The page for the other Manus Katzenstein (1864) reports that he was married to Jeanette Mueller with whom he had four or five children born between 1900 and 1905, but none named Manus. However, Manus Katzenstein (1864) married Jeanette Mueller on October 5, 1892, and they had a son named Heinemann (for Manus’s father), born on October 16, 1894, and a daughter named Johanna who died when she was three months old on December 23, 1898. These two children are not listed on the Vohl Synagogue website page for Manus (1864). 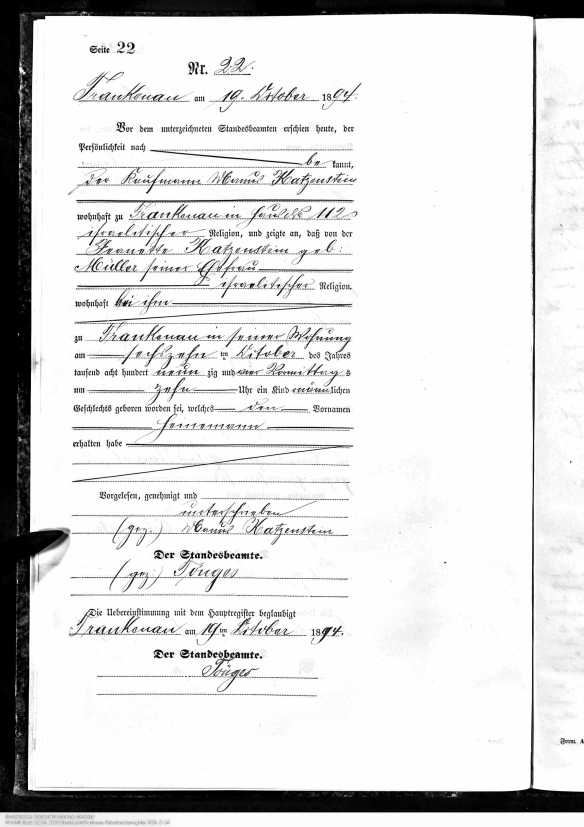 My theory? Heinemann, born in 1894, was the child who needed medical care for nervousness in 1896. Or perhaps there was another son born before 1896 who needed that care. At any rate, I believe that the child who needed medical care was a child of the other Manus (1864), not my Manus (1863). Heinemann Katzenstein is the only child with the Katzenstein surname born in Frankenau between 1890 and 1900 listed in the Hesse, Germany, Births, 1851-1901 database on Ancestry. I believe this was the child named “Manus” referred to on the Vohl Synagogue website.

One other reason for my conclusion? This page from the Alemannia-Judaica about Frankenau reports on the Jewish families left in Frankenau in 1933; it lists my Manus Katzenstein and his wife Fanny without children. The other Manus is not listed at all, but he had died in 1931, and his children might have left the community by the time this report was made on the Jews in Frankenau. (Thank you to Eran Elijahu of the German Genealogy group for sending me the link to this page.)

At any rate, despite this confusion, which led me down the research rabbit hole today, the Vohl Synagogue page for my Manus Katzenstein (1863) did answer some of the questions that had been left unanswered in my prior post. According to the Vohl Synagogue website, Manus and Fanny moved to Momberg on July 29, 1933, where they lived until January 1, 1940, when they moved to a “retirement home” in Frankfurt. I still don’t know whether that last move was voluntary or required by the Nazis as a preparation for the later deportation of elderly Jews. As stated in my earlier post, Manus died in the Jewish community hospital in Frankfurt on October 15, 1941, and his wife Fanny was deported to Theriesenstadt on September 1, 1942, and died or was killed there on April 15, 1943.

Barbara Greve also filled me in a bit about why Manus and Fanny might have left Momberg for Frankfurt in 1940.  She said that Manny and Fanny might have wanted to emigrate, but it would have been very difficult for them to get visas at that point in time, especially given their ages and more so if they lacked funds or were in poor health.  Barbara said that the Jewish home for the elderly in Frankfurt was run at first by the Jewish community as a place for older people leaving the smaller villages in Hesse, many of whom hoped to emigrate and follow their children out of the country. Those who ran the home tried to make it a comfortable place for those living there, but it was overcrowded. Eventually, however, it became a place where the Nazis ordered elderly Jews to go as they forced them out of their homes in other places. (Email from Barbara Greve, October 23, 2017)

[1] The source for much of the information about Wolf Katzenstein came from a book by Heinz Brandt, Die Judengemeinde Frankenau zwischen 1660 und 1940. Aus dem Leben jüdischer Landmenschen. Frankenberger Hefte Nr. 1, 1992.  I have just ordered the book; it should be quite a challenge to read with my elementary level of German.

30 thoughts on “Some Questions Answered and More Raised: Which Manus Katzenstein Killed the Pig?”