My father remembers Milton Goldsmith as an author of children’s books so I was not surprised to learn that Milton had in fact written a number of works for children after moving to New York City in about 1905.

In 1905, Milton, Sophie, and their two young daughters were living at 1125 Madison Avenue in New York City, but Milton was still working as a merchant, according to the 1905 New York State census.

However, by 1906, Milton was listed in Who’s Who in America as an art publisher and author.1 The listing stated that he was the president of Goldsmith-Leving Company, a company engaged in the embossing of art, calendars, pictures, and the like.  It further described him as a contributor of many short stories to magazines and local and Jewish newspapers and of “several hundred poems” to magazines such as Puck, Judge, Life, and Cosmopolitan. In addition, Milton’s musical and dramatic works were mentioned in the listing and, of course, his books.

In 1908 Milton published his first children’s books. So far I have found three of them published in that year alone. The Adventure of Walter and The Rabbits,2 is a story about a boy named Walter who follows a rabbit into a hole in a tree and observes the rabbit family; he learns never to be cruel to animals based on his observations.  It is a sweet story and one with a lesson all children should learn.  Its innocence and simplicity seem quite refreshing in contrast with some of the cloying Berenstain Bear books I’ve lately had to read to my three year old grandson. I assume that Milton wrote this book with his two young daughters in mind.

I was unable to locate online versions of the other two children’s books published by Milton Goldsmith in 1908; I wish that I could spend the money to buy copies of all his works, but alas, that is not feasible. But I was able to find images of the covers of the books online.

One was entitled Dorothy’s Dolls:3 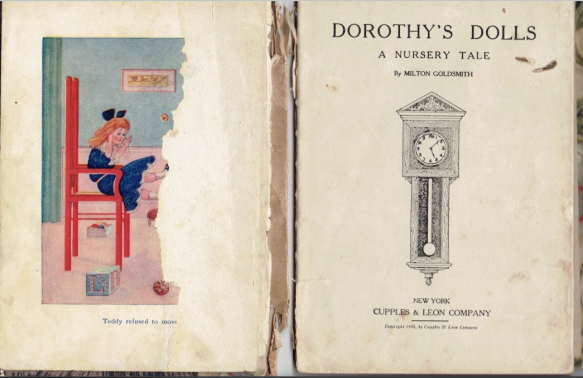 The third book published by Milton Goldsmith in 1908, also a children’s book, was The Magic Doll. 4

I imagine that Milton’s two young daughters Rosalind and Madeleine were the inspiration for all three books. From this point forward in his writing career, almost all his books were written for an audience of children.

By 1910, Milton seems to have left the art embossing business and gone into advertising, for that is the occupation listed for him on the 1910 census.  At that time he and Sophie were living at 783 Madison Avenue with Sophie’s mother and her two sisters as well as her sisters’ husbands. I was puzzled that neither of Milton and Sophie’s daughters was listed in the household; Rosalind would have been nine, Madeleine six. Where could they have been? Since I could not find them anywhere else on the 1910 census, I believe that this was just an enumeration mistake.

According to one source, Milton spent 1910 and 1911 in Berlin and Paris, translating German and French plays into English for the American stage.

By 1915, they were all listed together (though Rosalind was here listed as Ralph and as a son), living at 353 West 85th Street in New York, and Milton continued to work in advertising, now at his own agency.

Meanwhile, his writing career continued. As his daughters grew from young children to schoolgirls and teenagers, his works also targeted somewhat older audiences than the fairy tales he’d written in 1908. In 1916, he published Practical Things with Simple Tools: A Book for Young Mechanics.5

Interestingly, and a sign of its times, this book was specifically targeted for boys. Here is part of the introduction to the book:

The book consists of instructions and illustrations for how to make a long list of things intended for boys:

Milton Goldsmith also wrote two books under the pseudonym Astra Cielo during these years.  The first, published in 1917, Fortunes and Dreams, is a “practical manual of fortune telling, divination, and the interpretation of dreams, signs, and omens.”6 The second Astra Cielo book is similar. Published in 1918, Signs, Omens and Superstitions covers, as you’d expect, signs, omens and superstitions.7

It’s hard to imagine the same author who expressed quite modern views of religion and skepticism about superstition in A Victim of Conscience and Rabbi and Priest endorsing these practices, but perhaps that’s why he wrote under a pseudonym.  Although both books express doubts about believing in or relying on these practices, the books go into great detail about these subjects and thus create a sense that these are legitimate practices and beliefs.

After these works of “non-fiction,” Milton published a novel for older children, The Strange Adventures of Prince Charming: A Story for Young & Old. 8  This work is a full length novel and tells about the adventures of a young prince as he makes his journey in the “real world.” It has elements of satire and more advanced vocabulary than the earlier children’s books. (I confess I did not read the entire book; perhaps my older grandson would appreciate it, however.)

Milton ended the decade with another work of children’s non-fiction, I Wonder Why: The How, When and Wherefore of Many Things.9 I was very happy to see that he dedicated this book to his daughters, “Rosalind and Madeleine, whose many questions inspired the writing of this book.” At least this time he recognized that girls also have curiosity and a need to know about practical matters.

The book is written in narrative form based on a fictional family, the Palmers, with five children, three boys and (yay!) two girls. Their father is an engineer, and the book consists of chapters on different topics where the father (sigh) answers the children’s questions about a wide variety of scientific issues.  Here is just a portion of the table of contents: 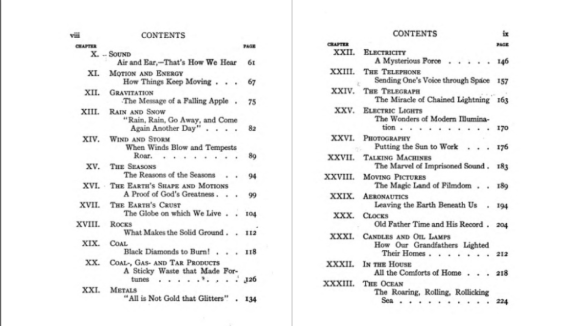 In addition to publishing all these books, Milton, along with Bennett James, adapted his first novel Rabbi and Priest into a play, The Little Brother, which was performed in London and then on Broadway in 1918 with a cast that included Tyrone Power, Sr. Despite positive reviews for its treatment of interfaith conflict and prejudices, it closed after 120 performances in March, 1919. 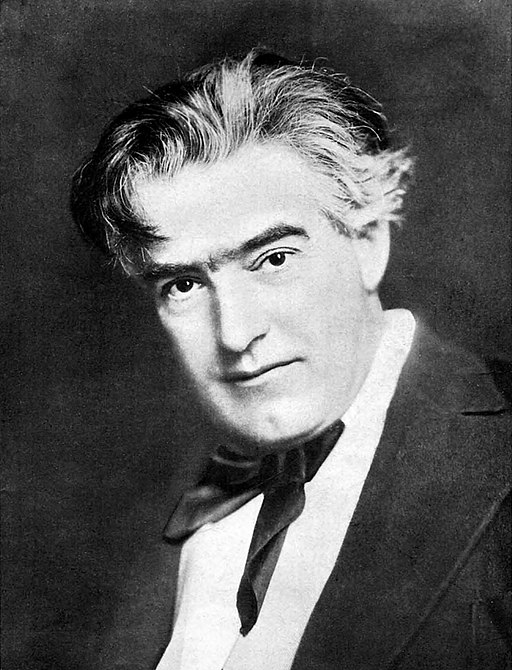 Thus, by 1920, Milton had published a number of books and had had a play produced in London and on Broadway. However, his principal occupation, as listed on the 1920 census, was  still advertising.  10

What would the next decade and those to follow bring for my cousin Milton and his family?