The story of Felix Goldsmith’s life after 1900 is a sad one. In searching for articles about him, I first found two articles that suggested he was doing very well. He had left Denver by 1908 and moved with his wife Fanny and two children Clarence and Ethel to Cincinnati, where Fanny’s family lived and where she’d been born and raised. It looked like Felix was investing in real estate for a new business:

“Greater Cincinnati is assured, for the business men stick till they get through with a thing.”

This is Felix S. Goldsmith’s verdict. He is one of the younger men who are shoving the Queen City to the front.

Hard times? Not for him. He wasn’t a bit bluffed upon getting out of a hospital from a long siege of sickness just when the calamity howlers were busy. He plunged in, organized the Freericks Hot Water System Co. and demonstrated that HARD TIMES was a joke in Cincinnati.

Goldsmith will hire over 300 extra men in a few days.

Goldsmith is also largely interested in the real estate movement. He is President of the Fernbank Real Estate Co. For several years prior to his removal to Cincinnati he was one of the high-ranking engineers of the Colorado district.

The only hint of trouble here is the reference to “a long siege of illness” and hospitalization. But a month later the rest of the story began to come to light, as seen in this article from the Denver Post on July 27, 1908:

Felix S. Goldsmith, former Denver mining promoter, who for the past year has conducted an office in this city, and who is interested in exploiting a new morning newspaper here, to be called the Morning Mail, was arrested late last night on the charge of passing worthless checks on the Idaho Springs National bank of Colorado.

Half a dozen merchants who hold checks marked “No funds,” made complaint against him. Goldsmith claims the checks were among those sent him by T.S. Richards of Denver, who, he says, is interested with him in vast mining properties there, and has an office in the First National Bank building. The drafts, he says, were first made out on the Idaho Springs bank, and deposited in the Continental National bank of Denver.

Goldsmith says he has been suffering from nervous prostration for three years, and that relatives in Denver tried in vain to have him adjudged insane. The police have been trying to get in touch with relatives, but he refuses to give any definite information concerning their residence. He had, up to late tonight, been unable to get any one to furnish bail for his release.

The Cincinnati Enquirer of July 27, 1908 revealed more of the background to Felix’s troubles:

With the arrest of Felix Goldsmith at the instance of W.C. Seekatz, manager of the Florsheim Shoe Company, an avalanche of flowers and candy will cease at the City Hospital. As late as last November Goldsmith was a patient at that institution, an inmate for the neurological ward.

He was admitted to the hospital September 26, 1907, from the Rand Hotel and placed on the service of Dr. Herman Hopps, the alienist. At that time Goldsmith showed such decided symptoms of paranoia, having hallucinations of wealth and grandeur, that the physicians decided to probate him.

In some way Goldsmith got wind of this and demanded his discharge, which he received on November 28. While in the ward Goldsmith formed a strange friendship with Al Milton, also a neurological patient, which after his liberation he showed in many ways. Only last we andek Milton received a check from him for $2, with a letter stating that in a few days he would make him comfortable for life. To the nurses who waited off him and others with whom he became acquainted during his sojourn at the hospital Goldsmith was most lavishly generous. Scarcely a day passed when they were not to be the recipients of boxes of flowers and candy and baskets of fruit. These were always accompanied with his card, without an address, which prevented the return of these unwelcome presents.

Four days later, the paper reported that Felix had been committed to a psychiatric hospital at his wife’s request:

“Longview—Felix S. Goldsmith, Promoter of a Newspaper, Is Committed at His Wife’s Request,” The Cincinnati Enquirer, July 31, 1908, p. 10

Felix S. Goldsmith, erstwhile promoter of newspapers and other big enterprises, as well as alleged layer of protested checks, was committed to Longview by Drs. David and Kendig, the Probate Court examining physicians, yesterday. Goldsmith was before the Court on a lunacy warrant sworn to by his wife, Fannie Goldsmith, of 3004 Stanton avenue, who was later named as his guardian by the Probate Court.

On Sunday, May 17, Goldsmith had a sensational encounter with his brother-in-law, Albert S. Rosenthal, in Avondale, and the next day Rosenthal secured a lunacy warrant for him. Goldsmith evaded arrest on the warrant for a few days, and then gave himself up, declaring that he could easily prove his sanity. However, the warrant was never pressed and no inquiry was had at that time. The warrant, which was never withdrawn, was destroyed yesterday when Mrs. Goldsmith made the affidavit for her husband’s arrest.

Within the past week or two Goldsmith had given a number of checks which the recipients were trying to have him take up, and as the result of one of these he was arrested. Then the lunacy warrant was secured. Goldsmith promoted a new newspaper to be known as the Morning Mail, but further incorporating nothing seems to have been done.

This whole story is incredibly sad. Felix obviously had had some kind of psychotic break. The antiquated terminology like “lunacy” and the newspaper coverage seem so stigmatizing. Today one hopes that there is a better understanding of a psychosis like that suffered by Felix.

I could not find Felix on the 1910 census; I assume that he was still institutionalized. Felix’s wife Fannie and children Clarence and Ethel continued to live in Cincinnati. In 1910, they were living with Fannie’s sister Hannah Wachtel and her children. Fannie was working as a bookkeeper in a wholesale clothing store.

The next record I have for Felix is his death certificate. Felix died from a cerebral hemorrhage on January 18, 1919. He was 59 years old:

His wife Fannie did not remarry. In 1920 she was living with her two grown children in Cincinnati. Clarence, now thirty, was a traveling salesman for a glassware company, and Ethel, 24, was a psychologist in juvenile court.1

On September 7, 1928, Ethel married Harry Muegel in Cincinnati. Harry was the son of Peter Muegel and Elizabeth Plaspohl and was born on December 12, 1895, in Cincinnati.  He was a student at the time of their marriage, and Ethel was a psychologist. 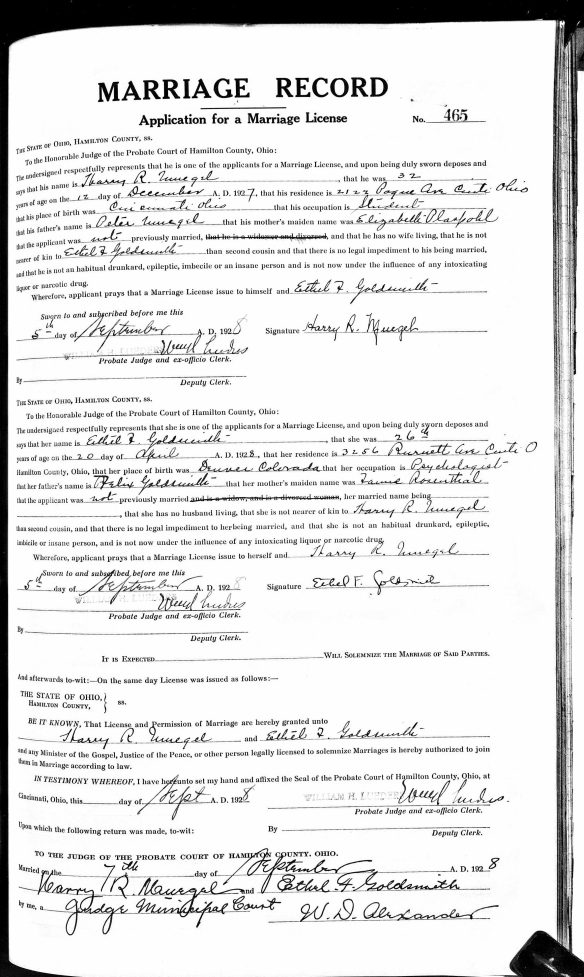 In 1930, Fannie, Clarence, Ethel and Harry were living together in Silverton, Ohio. Ethel continued to work as a psychologist. Her husband Harry was a public school teacher. Clarence was also working in juvenile court now—as a probation office.2 According to this article, Clarence was the Assistant Chief Probation Office in charge of the Boys’ Delinquency Department of Juvenile Court and was “regarded as a state authority in his field.”

I find it fascinating that both Ethel and her brother Clarence ended up working with children in trouble. I have to wonder whether their father’s experience with mental illness influenced their career choices.

In April 1931, Clarence was engaged to Leona Rosenbaum. She was the daughter of David Rosenbaum and Lydia Miller and was born in Baltimore on September 5, 1900. Her father owned a drugstore, and in 1930 Leona was working as a teacher in a parochial school and living with her parents in Cincinnati.3 Although I was able to find the engagement announcement in the newspaper, I could not locate a marriage record or announcement, but I did find references to Mrs. Leona Goldsmith and Mrs. Clarence Goldsmith  in the Cincinnati papers starting in 1932, so they must have married by then. An article in the July 2, 1936, Cincinnati Enquirer (p. 12) referred to Clarence as the assistant chief engineer of the National Board of Fire Underwriters, indicating that he had left his juvenile court position for work in the insurance industry.

Things thus seemed to be going well for Felix Goldsmith’s family as of 1936; his children were both married, and both had meaningful careers. But then tragedy struck twice in one month. On May 1, Felix’s widow Fannie Rosenthal Goldsmith died from chronic nephritis and hypertension; she was 74.

Just two weeks later, Ethel Goldsmith Muegel, Felix and Fannie’s 42 year old daughter, died suddenly on May 15, 1937, in Ann Arbor, Michigan, where, according to her obituary, she had gone to recuperate from a “physical breakdown suffered when working for the Red Cross during the flood in Cincinnati.”

According to the Ohio History Central website, “In 1937, southern Ohio faced one of the worst floods in its history. The flood was particularly difficult for the city of Cincinnati, where flood levels reached almost eighty feet. Communities along the Ohio River in Kentucky, Indiana, and Illinois also faced serious problems. As the flood waters rose, gas tanks exploded and oil fires erupted on the river. Parts of Cincinnati remained under water for nineteen days, and electricity and fresh water were in short supply. Many people lost their homes as a result of the flood. The Ohio River Flood of 1937 caused more than twenty million dollars in damages.”

Ethel Goldsmith Muegel had sacrificed her health and ultimately her life to help those in need.

Clarence Goldsmith had lost his mother and his younger sister in the space of two weeks. That seems unimaginable.

In 1940, Clarence and his wife Leona were living in Cincinnati where he was working as an insurance agent.4 Sadly, Clarence died six years later on January 29, 1946, at the age of 56. 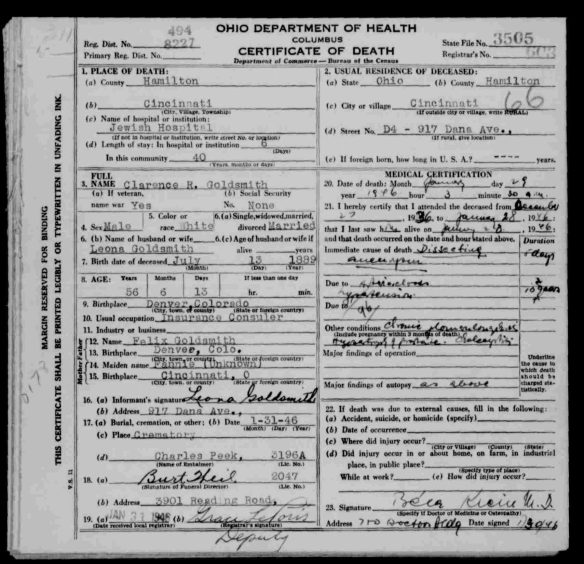 According to his obituary, he died from a heart ailment. His obituary also stated that as well as working as an insurance agent, he was the president of the Big Brothers Association and former assistant chief probation officer in Juvenile Court and that he had given “his time and experience to help boys from undesirable home environments to develop into fine men and valuable citizens.”5 The obituary continued:

He and fellow “big brothers” took such unfortunate juveniles under their wing, befriending them and offering moral help. Mr. Goldsmith had received letters from servicemen all over the world thanking him for giving them a new slant on life. 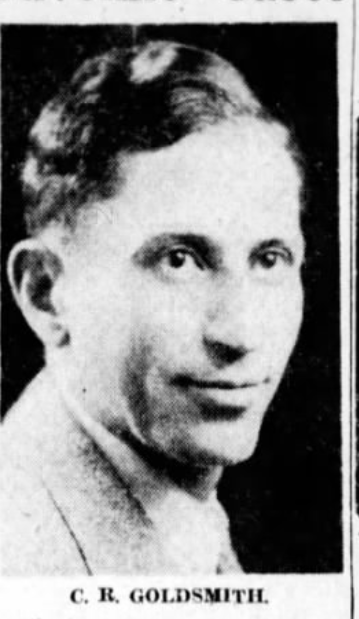 Neither Clarence nor Ethel had children, so there are no descendants of Felix Goldsmith or his children. All three died before reaching age sixty. Felix certainly struggled in his life, dealing with psychiatric issues that caused him to be institutionalized, leaving his wife Fannie and his two children to go on without him.  His children found ways to help other children who also might have endured difficult issues at home—Ethel as a psychologist in juvenile court, Clarence as a probation officer and then as a volunteer with Big Brothers.  What a noble way to honor their father’s memory. I hope by telling their story I have honored theirs as well.