It’s hard to imagine the nightmare that the 1910s brought to Joseph Sigmund’s daughters, Lenore and Celeste. Both had married in the prior decade. As we saw, Lenore married a doctor, Henry Isaacs, and had moved with him to the Pittsburgh, Pennsylvania area. Celeste married Abe Diamond, a cigar salesman from Chicago who had relocated to Denver, where Celeste and her family were living. Celeste and Abe had a daughter Marjorie who was born December 27, 1909, in Denver.

Then tragedy ended both of these young marriages. On February 19, 1912, Lenore’s husband Henry Isaacs was killed in a collision in Denver between a firetruck and the streetcar in which he was riding. Henry and Lenore were in Denver for the winter because Lenore was in poor health. Henry was only 32 years old. 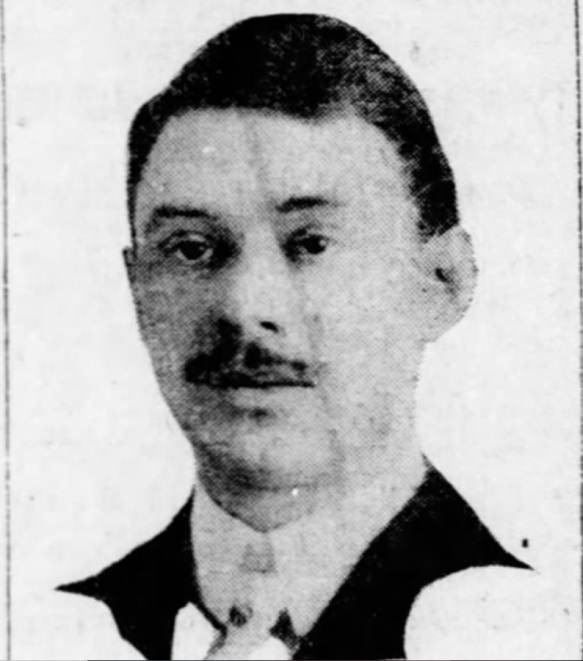 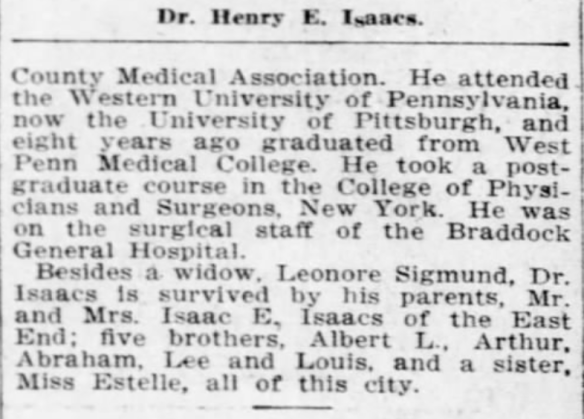 Lenore remained in Denver and was at the same address as her parents in the 1913 Denver directory.1

Just four years later, fate dealt the family another cruel blow. Joseph Sigmund’s other son-in-law, Celeste’s husband Abe Diamond, was killed in a car accident in Denver on July 12, 1916. He was driving a car he had purchased just the week before. The car was traveling at a high rate of speed up a steep hill when it skidded and went over an embankment, falling 25 feet below. Abe was pinned under the car and crushed by its weight, dying instantly. A passenger in the car was thrown from the car and escaped serious injury. Abe Diamond was 37 years old when he died, and he was survived by his wife Celeste and their six-year-old daughter Marjorie.

The Denver Rocky Mountain News also wrote about the accident:

Both Denver newspapers noted the terrible fact that both of Joseph Sigmund’s sons-in-law had been killed in automotive accidents in Denver. It is hard for me to fathom how the family responded to the cruelty of these events. How could two sisters both lose their young husbands in accidents like this within five years of each other?

Somehow the family survived and persisted. Both sisters eventually remarried. On September 23, 1919, Lenore married Edwin Weinberg in Denver.2 Edwin was a native of Chicago, born there on February 27, 1892, the son of Moses Weinberg and Emily Moore.3 In 1900, Edwin’s father was a bookkeeper for a wholesale meat business, and Edwin was a clerk in a wholesale hat business.4  Edwin was still living in Chicago in 1917 when he registered for the World War I draft; he was working as a salesman at that time.5 I’ve no idea how Edwin and Lenore met, but after marrying they settled in Denver, where in 1920 Edwin was working as a clerk in a clothing store. Lenore and Edwin would have one child born in the 1920s.6

Meanwhile, in 1920 Celeste was still living with her parents Joseph and Emma in Denver along with her daughter Marjorie. Joseph continued to work as an advertising writer and was supporting his wife, daughter, and granddaughter.

But Celeste remarried later that year. On December 12, 1920, she married Hugo Rothenberg in Denver.7  Hugo was born in Hamburg, Germany, on June 7, 1878, to Isaac Rothenburg and Rebecka Heymann, and immigrated to the US in 1896.8 In 1905, he was living in Denver, working as a clerk for Simon Frank & Company, a wholesale notions business.9 He was apparently quite friendly with Abe and Celeste Diamond.

In 1910 he was working as the secretary of a mercantile business, Stern-Prince Importing, in Denver,10 but by 1918 Hugo had relocated to Milwaukee, Wisconsin, where he was a manager for Paris Fashions Co.

He was still living there in 1920, and after he and Celeste married in December 1920, they lived in Milwaukee for at least the next four years.11  They would return to Denver by 1925 and remain there for many years, as we will see.

Thus, both Lenore and Celeste remarried after losing their first husbands to tragic accidents. The will to go on and to find love again is remarkable.