Last time I shared the first part of the memoir of my cousin Julius Loewenthal, graciously shared with me by his granddaughter Joanne. We saw that Julius grew up in Frankfurt in the midst of the large and loving extended Goldschmidt family with his uncles and his grandmother and his grandmother’s siblings. They were a successful and wealthy family, but also a family that observed Jewish law and holidays. And Julius was a hard worker—both as a boy in school and then as an apprentice starting when he was fourteen.

The next section of his memoir describes his young adulthood, starting with a description of his experience with the cholera epidemic in 1892, an experience that strikes such a familiar chord in these days of the COVID19 pandemic.

After 2 years of apprenticeship I joined my father in his small wine business. It was small, and at the age of 17 I was forced to go out travel and sell. It was very hard for me; a lot of effort was needed to get business. The main customers of the business was the family, who however used large amounts of wine.

I travelled to Hannover, Berlin, and Hamburg, where in the year of 1892 I went through the Cholera epidemic. The town official withheld the information as to the serious nature of this sickness from the population. Thus, when it became known, panic set in and as hundreds died, everybody fled town, and I was unable to buy a railroad ticket for several days. The train went through several medical check points where we were examined and were only allowed to travel until Hannover.

Cholera epidemic at a hospital in Hamburg, 1892, https://commons.wikimedia.org/wiki/File:Cholerabaracke-HH-1892.gif

We arrived in the middle of the night and unable to get a Hotel room I went to an all-night Coffeeshop where because of lack of sleep and food I passed out. Fortunately, the Doctor on duty was my cousin Dr. Rafael Hirsch who took me into his home where I recovered. There is no question that he saved my life because had it not been for him I would have been sent to the Clinic which received all the late Cholera cases which were diagnosed at the check points. Most of the people sent to that Clinic never did come out. 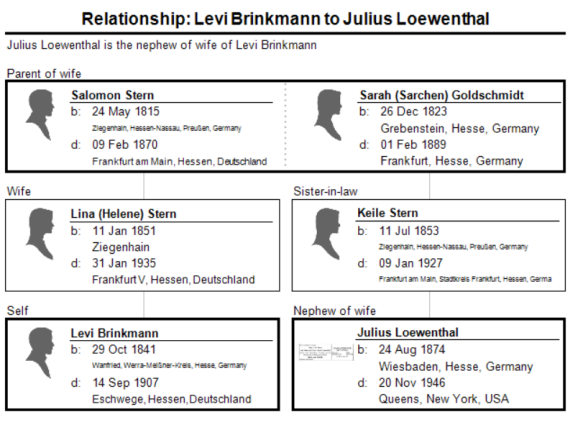 During this time I made up my mind not to stay in my father’s business but to join a larger Firm where I could find success and fortune. I joined with the permission of my father the firm of Sahl & Co. in Reudesheim and travelled and sold wine for 2 years. I visited Paris, Baden Baden and did nice business.

I was only 19 years old and not in strong health. I learned foreign languages and was an enthusiastic love of nature. Thus, I made the decision, and upon completion of my trip, to walk through the Black forest and the Odenwald back to Frankfurt. [See map below—this is a 158 miles walk that Google Maps estimates would take 53 hours.] This I did alone. It was wonderful and I found other tourists who walked with me for several days. I slept in small villages in order to save money because I had little money to spare. I sketched the mountains and the castles which I saw and saved some of those drawings to this day. I was indeed talented in drawing and played the piano well. It was my first vacation ever. [Editorial comment: I was amazed by how a young man who left school at fourteen was able to engage in so much self-education.]

When I was 20 years of age my uncle Levy Brinkmann visited with us in Frankfurt and offered me a position in his business LS Brinkmann in Eschwege. I was unsure and after several discussions I agreed and moved to Eschwege. In this beautiful little town surrounded by beauty of nature the Brinkmanns became my second parents because they treated me and surrounded me with love and kindness which gave me the opportunity to open up, and Eschwege became my home, my real home, where I felt protected and comfortable until I was forced to leave forever. 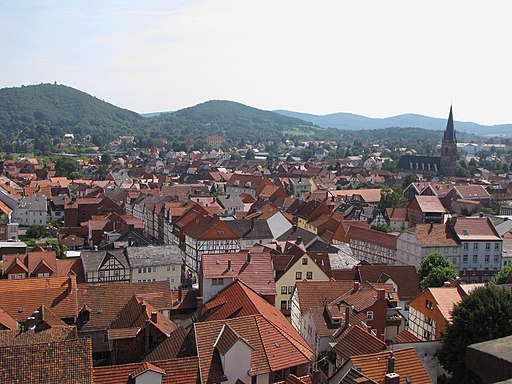 …The Jewish congregation of Eschwege had a nice Synagogue, a Jewish school, and a Rabbi…. Jewish life in Eschwege was not like I had been accustomed to in Frankfurt. Kosher meat was purchased at the gentile butcher, whose assurances had to be accepted that the meat was kosher….The strict Jewish life as was known in Frankfurt was not known in Eschwege.

….The congregational life in Eschwege however was a very close one. We had meeting hall, and every Saturday night everybody met to play cards, talk, and the youth danced and had fun…We had a large number of young people, mostly well to do, well mannered and educated. During the summers …the young people made excursions into the forests and mountains of the surrounding [area] which was blessed with nature’s beauty… It was a happy and carefree time and only later when everything was over with, the memory remained like a fairy tale.

In the house Brinkmann lived on the second floor the partner and brother-in-law of Levy Brinkmann, Max Werner.

[Ed.: Max Werner was married to Helene Katzenstein, who was in fact a first cousin of Lina Stern, Levy Brinkmann’s wife. Helene and Lina were both granddaughters of Meyer Goldschmidt, the great-grandfather of Julius Loewenthal.]

In addition, as Julius describes, Helene Katzenstein had previously been married to Levy Brinkmann’s brother Moritz, who died six years after they were married in 1872; Helene then married Max Werner. So Helene was both Levy Brinkmann’s sister-in-law and the first cousin of his wife Lina.]

[Julius then described the business of Brinkmann and Werner—a wholesale business manufacturing stockings that were sold in the nearby villages.]

Max Werner was a beautiful human being. He contributed much to the happiness of all our lives. He was a personality, a very good businessman and a deeply religious Jew. Soon my uncle [Levy Brinkmann] expanded the business.  We tried to export and were successful with business transactions with England. It has to be considered that my uncle was born in a tiny village without a proper education and had deep drive and ambitions. In addition, he stuttered when he spoke which often caused much laughter in which he always participated. He knew how to tell stories and everyone was spellbound by it.

….I was 20 years old when I came to Eschwege. I was full of ideals and saturated with the teachings of Rabbi Hirsch. My Jewish education was extensive. Thus, every Saturday afternoon the Werner children had to come to my room and I had to teach them in Jewish history. All the children of the Werner household became religious Jews, even though the opportunity to became thus in Eschwege was not of the best….The third daughter Elsa, who was an extremely happy child, became my wife because I fell in love with her. The oldest son Moritz Werner became my partner….

After I had been in the bookkeeping department for better than a year events took place which brought me to new opportunities. One of our salesman left the firm and his post became available. My Aunt made the suggestion that I take his place and sell for the firm. …

I had opened a new sales territory in southern Germany…To travel was not an easy thing for me. I was young and could do it but to travel and remain strictly kosher was indeed a difficult task. I only lived on Eggs and Bread. … I was forced to fast more often than not….

Through my sales activity I acquired knowledge and feeling for the merchandise I was selling. I was exposed to the world…. This motivated me at the age of nearly 30 years old to study at the Textile School and Institute in Reutlingen, which remains one of the top schools to this day. My uncle became upset when I spoke of this plan. However, I knew that I had to have the technical knowledge if ever I wanted to become a success….and when I returned at the end of the year I was able to take charge with my newly acquired technical knowledge. I was very proud. 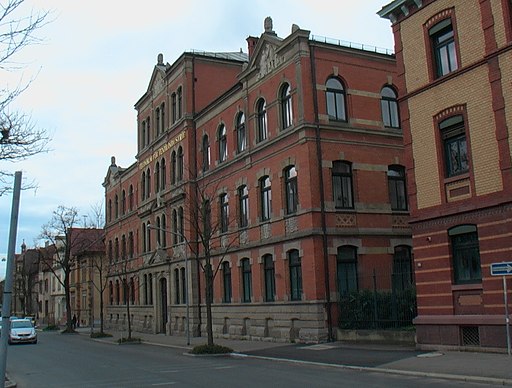 [Julius described how he convinced his uncle to purchase knitting machines and modernize the business as well as expand its product line from stockings to other knit goods.]

I don’t really know why I bother to write all that down because the Lord managed to take it all away again. However, I take the time to write it down so that our children know how big we once were, brought about through hard work and prayer.

I will end this segment here with Julius not yet thirty years old, but already a leader in his uncle’s business, a self-educated and self-made man whose ambition and intelligence helped him become a business success. In the next post I will post the sections from Julius’ memoir that cover the first three decades of the twentieth century from 1900 to 1930.

20 thoughts on “The Memoir of Julius Loewenthal Part II: The Cholera Epidemic and Moving to Eschwege”