When Amalie Goldschmidt Katzenstein died in 1903, she was survived by four of her children and eleven grandchildren. As we move into the twentieth century, I will focus on each of those four children separately, starting with Amalie’s oldest child, Helene Katzenstein Brinkmann Werner. 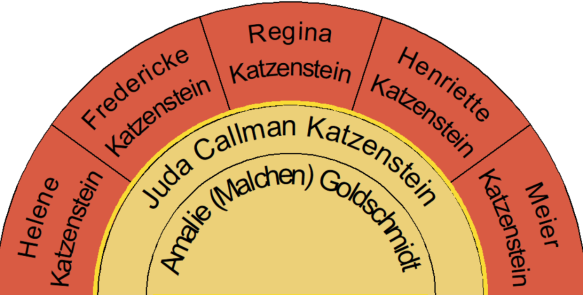 We already saw that Helene had first married Moritz Brinkmann in 1872 and that he had died six years later; she then married Max Werner in 1881, and they had three daughters and two sons. 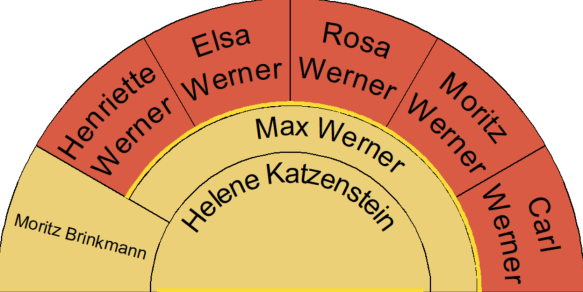 Their first child was Henriette, born on January 15, 1882, in Eschwege. 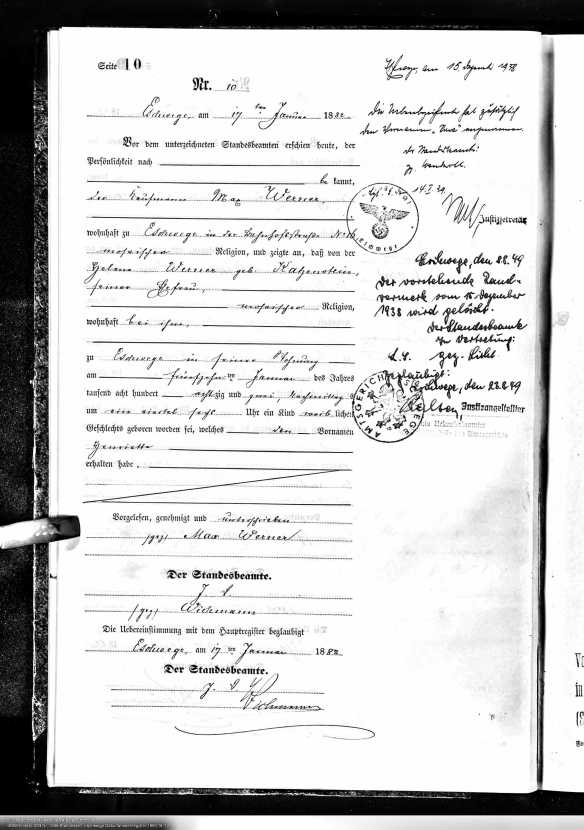 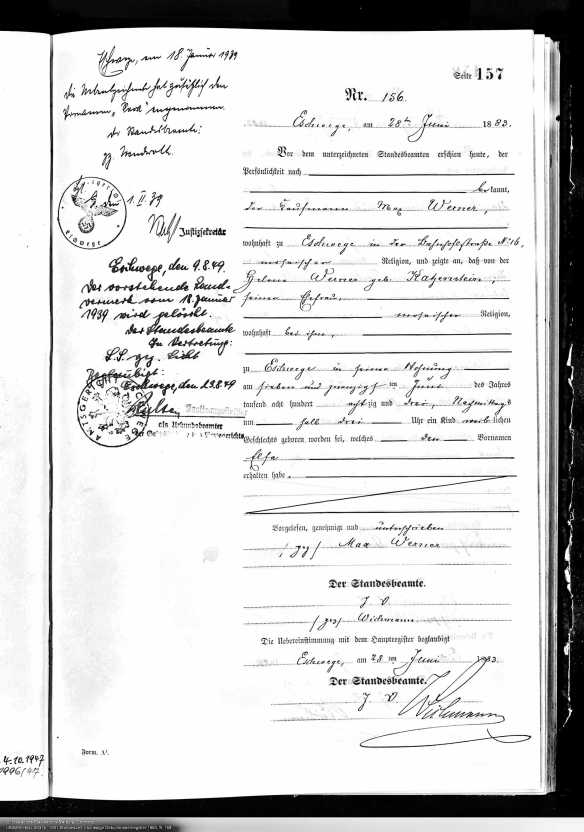 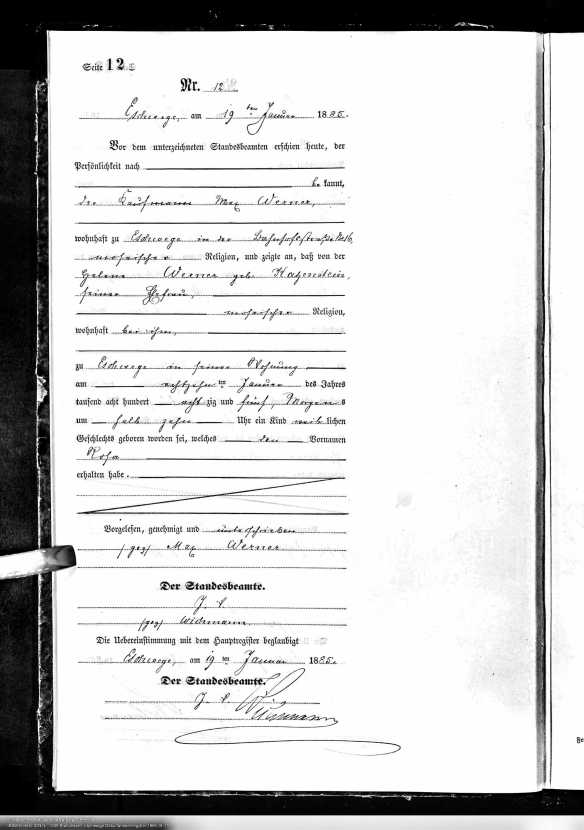 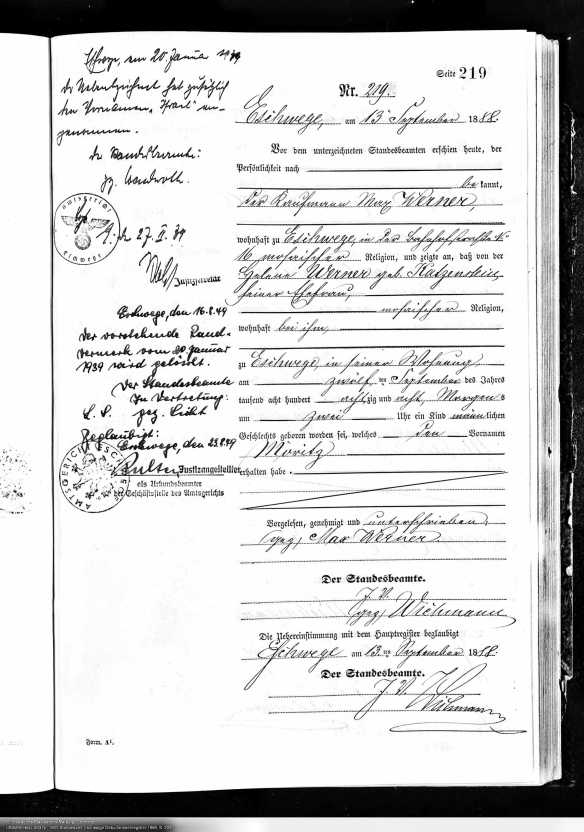 And finally their fifth child Carl was born on February 21, 1894, in Eschwege. 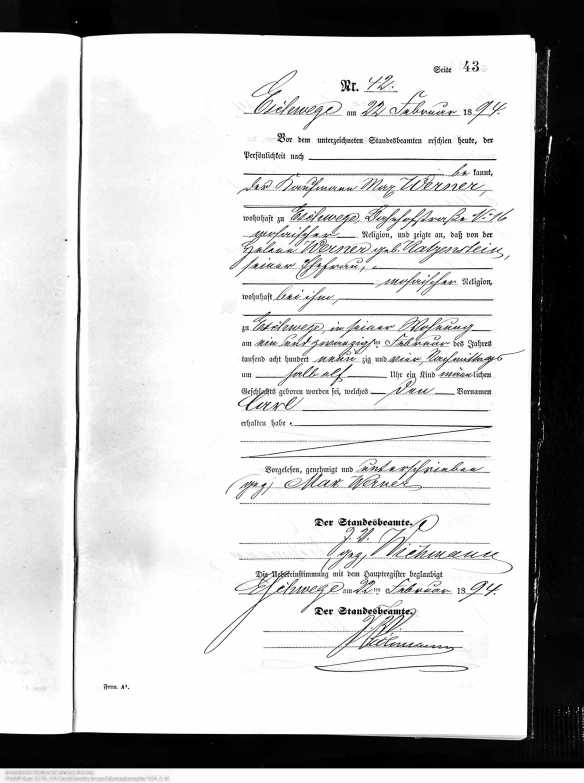 Helene and Max’s children began to marry in the first decade of the 20th century. Henriette Werner married Julius Cohen on November 11, 1901, in Eschwege. Julius was born January 9, 1869, in Altona, Germany, a town neighboring Hamburg, to Salamon Cohen and Emma Moeller. 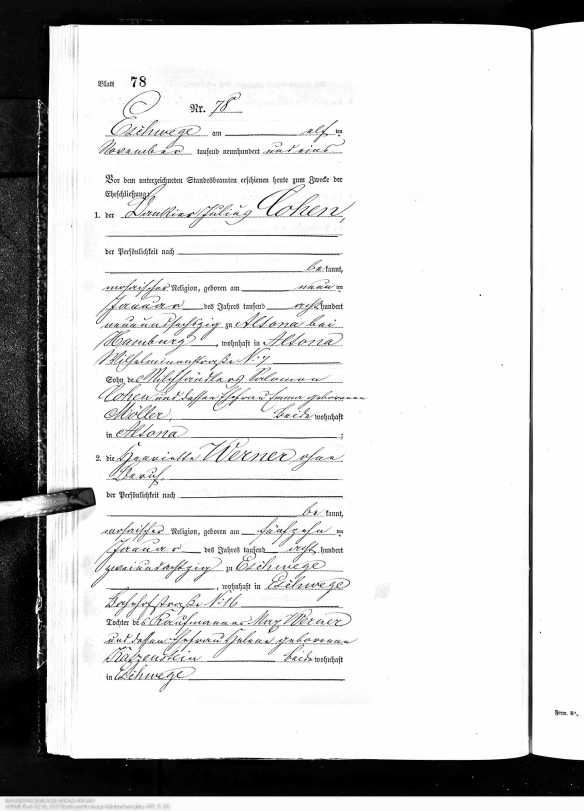 Henriette’s sister Elsa Werner married Julius Loewenthal on November 16, 1903, in Eschwege; as has already been discussed, Julius was her second cousin as his grandmother Sarah Goldschmidt Stern was the sister of Elsa’s grandmother Amalie Goldschmidt Katzenstein. 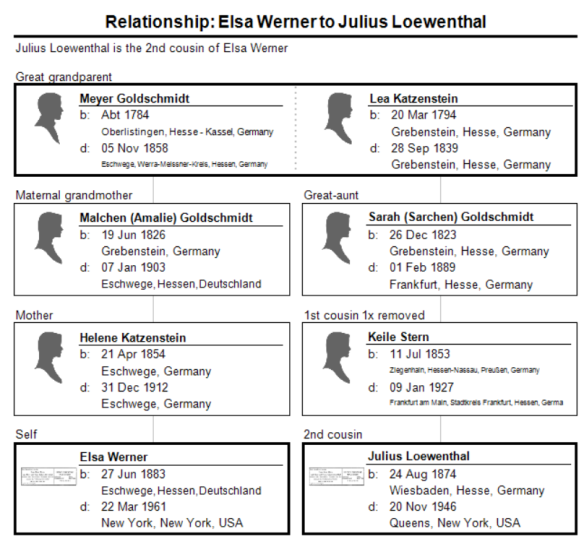 Helene and Max’s third daughter Rosa Werner married Josef Wormser on June 15, 1908. Joseph was the son of Raphael Wormser and Fanni Hirsch and was born in Karlsruhe, Germany, on October 17, 1874. 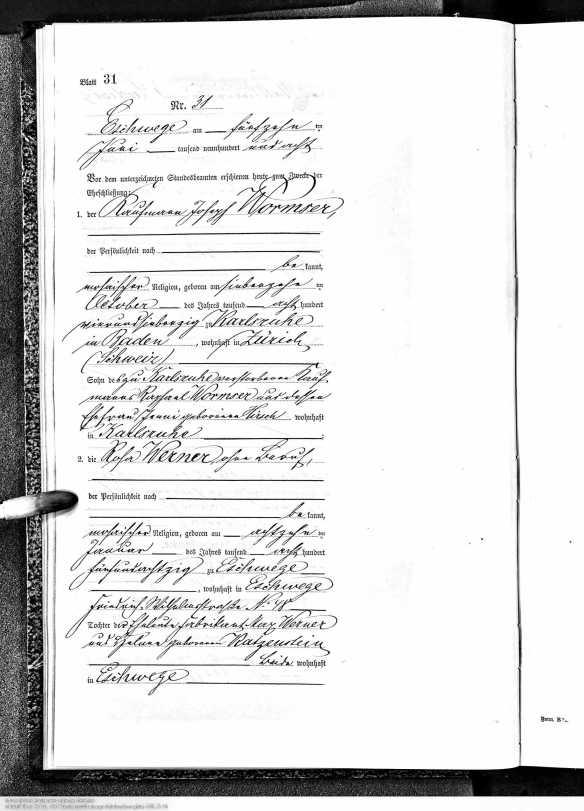 Unfortunately, Helene Katzenstein Werner did not live to see the birth of her grandchildren Julius and Helene. She died on December 31, 1912, in Eschwege. She was 58. Her granddaughter Helene Wormser was presumably named for her. 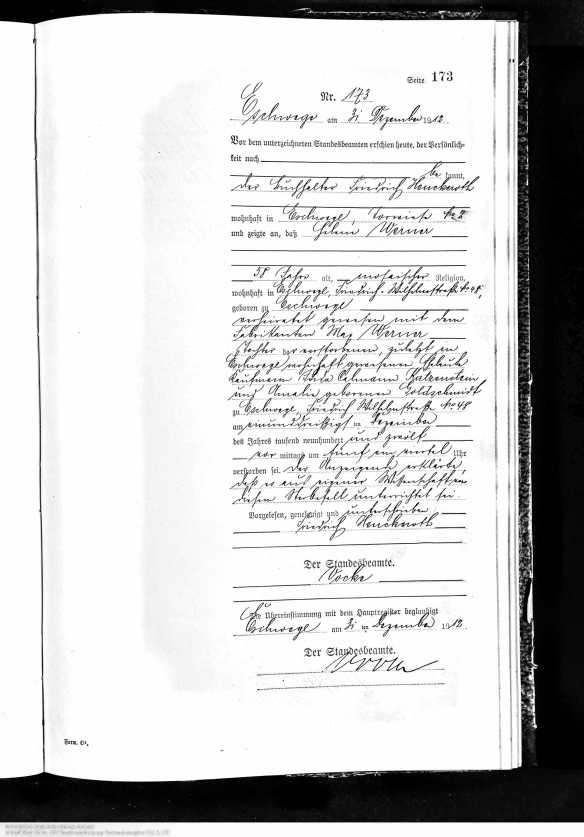 In some ways Helene’s death was a blessing because she was spared the suffering caused by World War I, including the death of her son Carl (sometimes spelled Karl) on September 25, 1916, while fighting for Germany. According to his death record filed in Eschwege, he died at the eastern front in Russia-Poland at the Schtschara-Serwetsch battle site. Thank you to the members of the GerSIG group on Facebook for their help in transcribing and translating Carl’s death record: 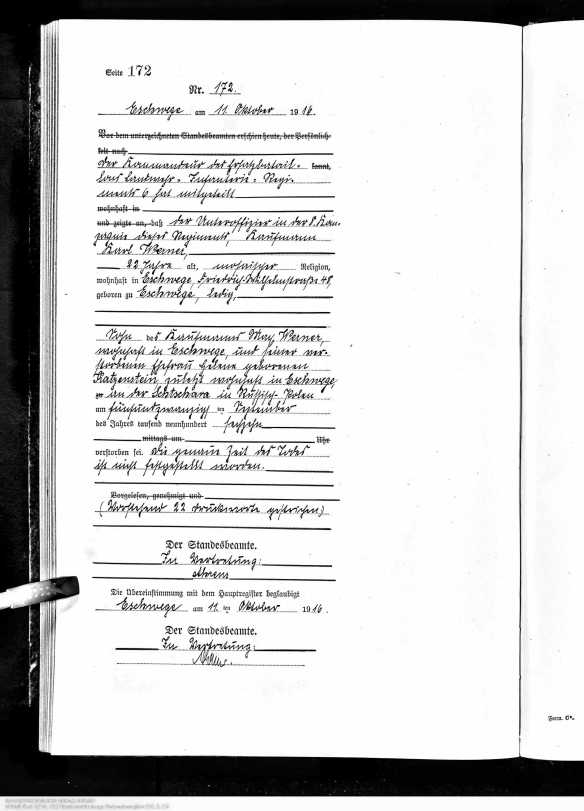 Translation: Eschwege, October 11, 1916 The commander of the replacement battalion Landwehr Infantry Regiment 6 has announced that the non-commissioned officer in the 8th company of this regiment, businessman Karl WERNER, 22 years old, Mosaic religion, living in Eschwege, Friedrich Wilhelmstrasse 48, born in Eschwege, is single , Son of the businessman Max WERNER, residing in Eschwege, and his late wife Helene, née KATZENSTEIN, most recently residing in Eschwege, where the Shchara in Russian Poland died on the twenty-fifth (25) September of the year thousand nine hundred sixteen. The exact time of death has not been established.

The Shchara River is in what is now Belarus, not too far from the border with Poland. As noted on the death record, Carl was a member of the Third Landwehr-Division, Infantry Regiment No. 6. According to Wikipedia, “The 3rd Landwehr Division fought on the Eastern Front in World War I. It was on the front in Poland from the early days, and participated in the Gorlice-Tarnów Offensive, crossing the Vistula in July and advancing toward the Bug, and eventually reaching the line between the Servech and Shchara rivers, where the front stabilized. It remained in the line there until the armistice on the Eastern Front in December 1917.” It was obviously during one of the battles at this front that young Carl Werner was killed; he was only twenty-two years old when he gave his life for Germany. 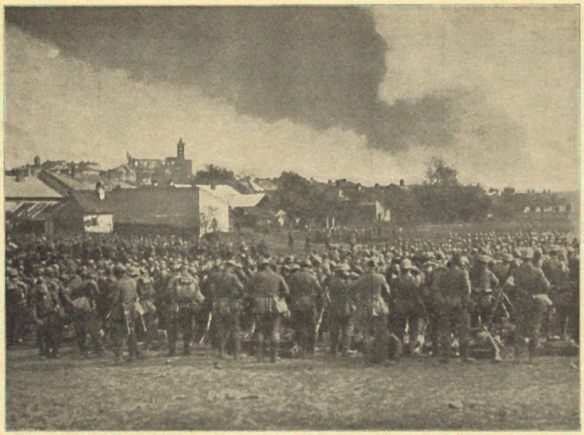 Third Landwehr Division at the Eastern Front in World War I, found at https://commons.wikimedia.org/wiki/File:Gorlice_bitwa.jpg#filelinks (public domain)

Max Werner died almost exactly three years after his son Carl on October 2, 1919; he was seventy. 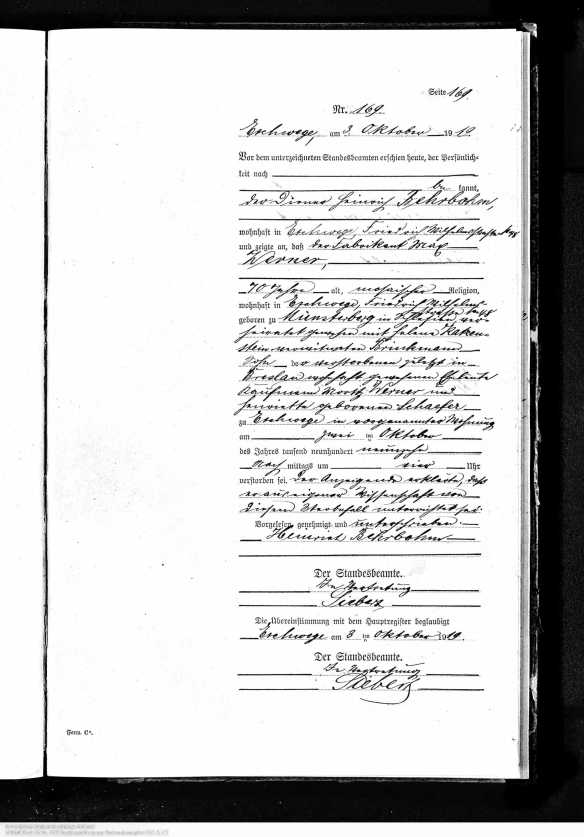 Neither Max nor Helene lived to see the birth of their last grandchild. Their son Moritz married Jenny Kahn on August 19, 1918; Jenny was born May 7, 1894, in Baisingen, Germany. She was the daughter of Moses Kahn and Amalie Marx.

Moritz Werner and Jenny Kahn had one child, born in Eschwege in 1922, named Max, presumably for his paternal grandfather Max Werner.5

Thus, Helene Katzenstein and Max Werner were survived by four of their five children and numerous grandchildren. They lost their son Carl in World War I, but despite that sacrifice, Carl’s siblings all had to flee from Germany during the Nazi era. We’ve already seen the fate—some tragic—of Elsa Werner Loewenthal and her family. In the next post we will see what happened to Carl and Elsa’s sister Henriette and her family.

14 thoughts on “Helene Katzenstein Brinkmann Werner: Losing A Son in World War I”