I was very fortunate to connect with my fifth cousin Betty, Betty Schnadig Cohen’s granddaughter and namesake, who kindly shared the family photographs I’ve included in this blog post. Thank you also once again to Bert de Jong and also to Rob Ruijs who found many of the notices from Dutch newspapers and introduced me to the Delpher.nl website for Dutch research.

Here, for example, is a May 7, 1903, wedding announcement for Betty and Bernard, thanking everyone for their kind wishes. 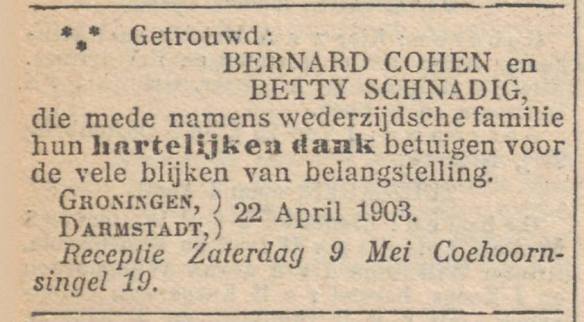 In this photograph, Betty and Bernard are dressed in costume to celebrate Purim:

This adorable little boy in the sailor outfit is their first-born child, Arnold, probably taken in Groningen when he was about three or four, or in about 1908:

This is a newspaper notice announcing Arnold’s bar mitzvah in February, 1917. 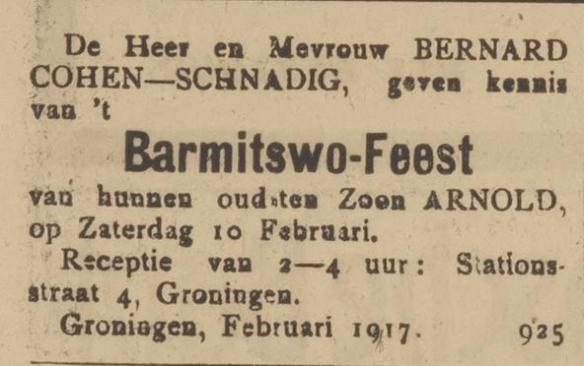 This is a lovely photograph of all  four children probably taken in the early 1920s.

And here is an announcement of Adolf Cohen’s bar mitzvah in 1929:

The family that celebrated these joyous occasions was destroyed just fifteen years after Adolf’s bar mitzvah.

According to a Stolpersteine website devoted to the Cohen family, when World War II started in 1939, Bernard very quickly realized the dangers ahead. After a swastika was painted on the front of their home in Groningen along with the word “Jood,” he knew they had to go into hiding. 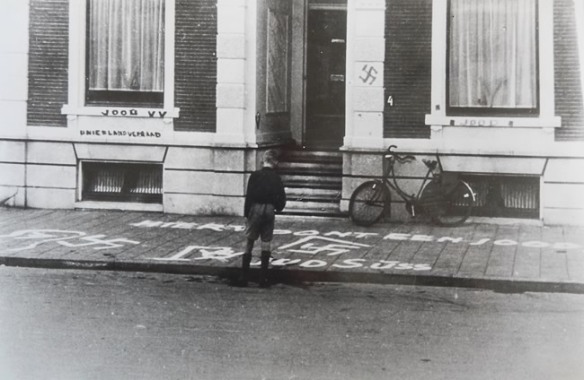 House of Bernard and Betty Cohen in Groningen. Courtesy of Betty de Liever

But their efforts to hide were not ultimately successful. Betty Schnadig and Bernard Arie Cohen did not survive; they were arrested on November 11, 1942, and sent to the detention camp at Westerbork, from which they were then deported to Sobibor on May 18, 1943, and immediately gassed to death upon arrival. 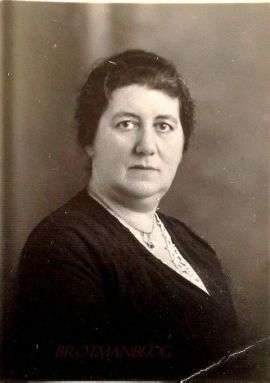 Of their four children, only two survived. One was their older daughter Simona Hedda. I located a card for her in the Arolsen Archives showing she was registered with the Judenrat in Amsterdam. The card has very little information other than Simona’s name, birth date, and address, and it’s not dated, but it appears that Simona was living in Amsterdam during the Nazi occupation of the Netherlands.

Somehow Simona avoided deportation and survived the war. On August 29, 1946, in Groningen, Simona married Jan de Jong, who was born on March 22, 1914, in Ooststellingwerf. Simona (apparently known as Mona) and Jan had a son Bernard de Jong (presumably named for Simona’s father) born November 4, 1948, but he died two and half months later on January 12, 1949.1 Sadly, Simona’s marriage to Jan did not long survive the loss of their child. They were divorced on April 28, 1950, in Groningen.

Thank you so much to Rob Ruijs, who found most of this information about Simona and her family, including these two newspaper notices for the birth and death of Simona and Jan’s infant son Bernard. 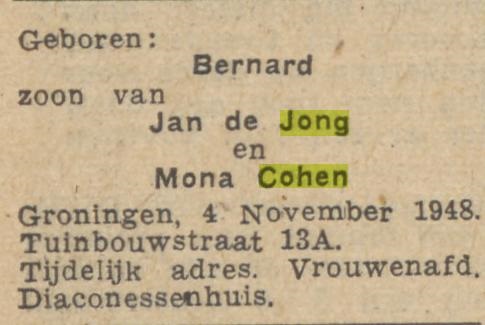 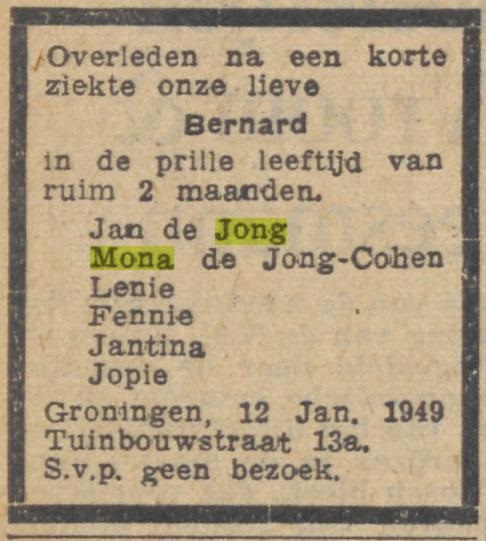 Thanks to Rob, I also know that Simona moved to Amsterdam after her divorce and worked for the city, eventually becoming the bureau chief. She died on February 5, 2005, in Amsterdam at the age of 93. As far as I can tell, she did not remarry or have more children. Simona was blessed with a long life.

UPDATE: Another reader, N. Aronson, found Simona’s Amsterdam residency card, which showed that she lived in Groningen until 1953, then in Nunspeet, and then in 1954 she moved to Amsterdam. Thank you!!

But Betty and Bernard’s other daughter Anita Cohen did not survive. She married Abraham Jacob van Dam on December 23, 1935, in Groningen, Netherlands.2 Abraham was born in Groningen on June 24, 1898, the son of Jakob van Dam and Netje Kisch.3 Abraham and Anita had two children, a son Jacob Abraham van Dam, born on July 3, 1938, and a son Bernard, born December 24, 1939. The photo below depicts Anita and her two little sons probably in 1941.

Anita, Abraham, and those two little boys in this photograph were murdered by the Nazis.

Just stop and think about that. Little Jacob van Dam was four years old, his brother Bernard not yet three. They and their mother Anita were murdered at Auschwitz on November 2, 1942. Their father Abraham survived until March 31, 1944, when he also died at the hands of the Nazis. Although it always takes my breath away when I discover yet another family member who was killed in the Holocaust, finding the Pages of Testimony for my cousins Jacob and Bernard, sweet innocent little boys, just sent me reeling.

Betty Schnadig and Bernard Cohen’s son Adolf married Henriette Sara Barnstijn on March 12, 1942.4 They both were murdered at Auschwitz before their first anniversary. Henriette was killed on December 15, 1942; Adolf was killed two months after his new bride on February 28, 1943. Henriette was 22, Adolf was 26.

Thus, Betty Schnadig and Bernard Arie Cohen and two of their children, Anita and Adolf, were murdered by the Nazis as were Anita and Adolf’s spouses and Anita’s two little boys. Betty and Bernard’s first born child Arnold survived, but not without tragedy. His story merits a separate post.