The earlier post established that Regina was born in Frankfurt on March 7, 1900, and married Siegfried Rosenberger on March 10, 1921, in Frankfurt, and had two children in the 1920s. In my second post about Regina, I wrote:

I don’t know a great deal about what happened to Regina, her husband Siegfried Rosenberger, and their two children during the Holocaust. It appears that at least until 1937 they were still living in Frankfurt and that after the war, according to Roger Cibella and David Baron, their two children were both married in the Netherlands and had children born there. Eventually they all immigrated to Canada where Regina died in February 1992…

And that was all I knew. Until a couple of weeks ago when I received an email from a sixth cousin named Mark Isenberg. I had first heard from Mark a few years back when he contacted David and Roger regarding his research establishing that his paternal four-times great-grandfather Joseph Falk Neuwahl and Roger’s and my four-times great-grandfather Jacob Falk Goldschmidt were probably brothers.

This time Mark was writing about his relationship to Siegfried Rosenberger, husband of Regina Goldschmidt. Siegfried was Mark’s third cousin, once removed, on his maternal side. Mark had seen my blog post quoted above and kindly alerted me to the fact that Siegfried and Regina’s daughter Ruth had done an interview with the Shoah Foundation in 1997. I’ve now watched the two and a half hours of her testimony and can report in much greater detail what happened to Regina, Siegfried, and their two daughters Ruth and Margo during the Holocaust. All the information below except where otherwise noted comes from that testimony of Ruth Rosenberger Steinert.1

Ruth Rosenberger was born in Frankfurt on December 6, 1922. Her sister Margo was born almost exactly two years later on December 19, 1924. Ruth described their childhood in Frankfurt in idyllic terms. They lived in a very large apartment with a nanny, cook, and other servants, and were surrounded by their Goldschmidt grandparents, aunt, uncle, and cousins, having regular shabbat dinners with the extended family as well as holidays. Their father Siegfried was a successful stockbroker. He was very proud of being a German and of his service to Germany in World War I, for which he was awarded the Iron Cross.  Their mother Regina lived a good life, playing tennis daily, socializing with friends, and overseeing the household staff. The family was very observant, and Ruth and Margo went to an Orthodox day school in Frankfurt. Watching Ruth talk about her childhood was very moving; she so well expressed how safe and loved she felt. 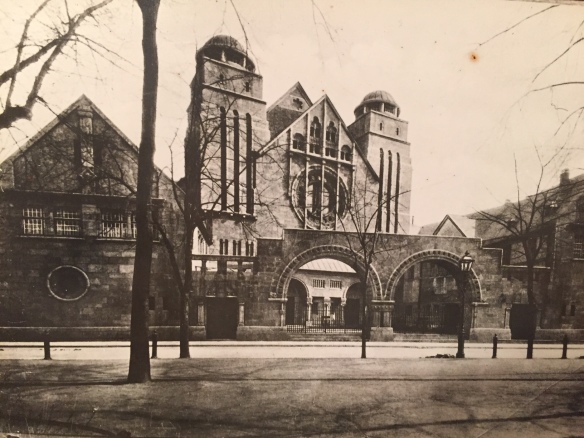 Everything was destroyed once the Nazis came to power. Ruth said that until 1936, she and her sister were fairly unaware of what was happening because the adults did not talk about the Nazis in front of the children. She knew that there were restrictions, mentioning as an example that they were not allowed to sit on the park benches, but she nevertheless felt safe.

But after 1936, it became impossible to hide what was happening from the children. Her father lost his stockbroker business because Jews were no longer allowed to engage in business. Ruth talked about how devastated her father was when they came and stripped away the telephones he needed for the business. The nanny, cook, and other servants had to leave the household because non-Jews were no longer allowed to work for Jews. Their mother Regina became terribly depressed.

Fortunately, Siegfried was able to secure another job with an international metals company called Lissauer. The position required him to travel to France and to Holland and enabled the family to continue to live fairly comfortably. As Ruth described it, this job ultimately saved their lives. Siegfried would never have left Germany despite all the oppression and fear. But in September 1938 while traveling for work in Paris, he was unable to return to Germany. Finally he agreed that the family should leave Germany, and through his business connections, he was able to obtain papers for them to immigrate to the Netherlands.

Ruth, not yet sixteen years old, took charge of packing and getting them ready to leave. They took a train to Paris, and Ruth put on lipstick so that she would look older. When they got to the French-German border at Emmerich, the German border guards gave them trouble with their papers, but fortunately a cousin was able to straighten matters out, and the next day they arrived in Paris. They remained in Paris for a few days, and then the whole family spent about ten days at the beach in the Netherlands. Ruth remembered it as a wonderful time and one of the very last times all four of them were together as a family.

Siegfried returned to Paris for work and would travel back and forth to Amsterdam. Regina and her daughters were living in a very nice apartment on the canal in Amsterdam. Margo attended high school, and Ruth spent a year at an art academy, learning design.  For a year life was fairly normal.

As one uncle had said to the family when they arrived in Paris, they had, however, gone from “the rain into the storm” because war was brewing, and no place was really safe. After the war started in September 1939 and then Holland and France were occupied by the Nazis in the spring of 1940, Siegfried could no longer travel to Amsterdam. From that point on, things went downhill.

Ruth recalled standing on a corner in Amsterdam with a crowd of other people from the neighborhood as the Germans marched into Amsterdam. 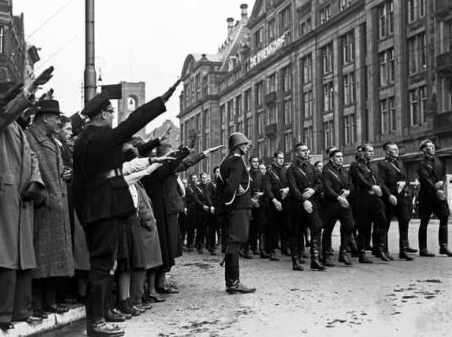 But even on that dark day, the family found a silver lining. A man named Benot Hess was also standing on that corner and engaged Regina and daughters in conversation. Hess was married to a non-Jewish Swedish woman, and because Sweden was neutral during the war, he was given some extra protection based on that marriage. Hess and his wife became close friends with the Rosenberger women—like family, according to Ruth. He made sure that they had enough money by helping Ruth obtain work, sewing and then manufacturing travel kits and other items. The products sold well, giving the family an economic cushion.

By 1942, however, conditions worsened. Jews were required to wear the yellow stars with Jood to mark them as Jews. Ruth said that they lived in a constant state of angst for all their waking hours. Eventually they were forced to move into what Ruth described as a ghetto where all Jews were forced to live, and SS men on trucks barreled through the neighborhood every night, coming to arrest people and take them to Westerbork, the detention camp outside of Amsterdam. 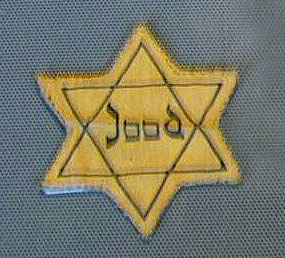 At that point, they had to make a choice: stay and see what would happen or go into hiding. Ruth favored going into hiding, but her mother was not willing, and Margo did not want to leave their mother. For some time they remained safe from deportation as both Ruth and Margo had positions assigned by the Judenrat (the Jewish council) that kept them protected. Once the SS came to their apartment, and Ruth managed to convince them that they were not Jewish. She claimed that because of her light hair and coloring and straight nose, she was able to fool them.

But when the SS arrived a second time, Ruth was not successful, and in March 1943, Regina Goldschmidt Rosenberger was arrested and taken to Westerbork. Ruth described it as the worst moment in her life, watching her mother being taken away. She said that at that time they did not know about the death camps, only about what were being referred to as work camps. Soon thereafter Margo lost her position with the Judenrat and was also taken to Westerbork where she joined her mother.

Ruth contacted her father to see if he could arrange false identification papers for her, which he was able to accomplish, and Ruth went to Bussum, a town in Holland, and hid with a family there for the duration of the war. She was almost caught once when the SS came to look for hidden Jews, but again was smart enough and lucky enough to convince them that she was not Jewish. 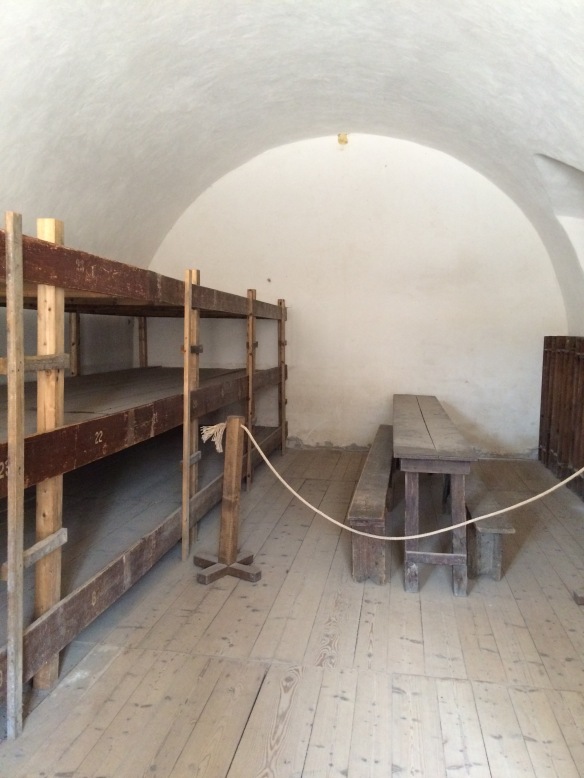 When the war ended in Europe in April 1945, Ruth was reunited with her mother and sister, and they all moved to Bussum. Margo married her fiancé, Robert Engel, who had been at Westerbork throughout the war period, and Ruth met and married Otto Steinert. In 1950, Otto was offered a job in Canada through the family’s connections to another family, and Ruth and Otto and soon thereafter Regina, Margo, and her husband all moved to Canada.

Siegfried was never reunited with the family. He remained in Paris, where he died not long after the war. Regina Goldschmidt Rosenberger lived a long life, dying in Canada in February 1992 when she was almost 92 years old.

Her two daughters also lived long lives. Ruth Rosenberger Steinert died at the age of 93 on December 22, 2013, in Montreal. Her sister Margo Rosenberger Engel died just this past June 30, 2020, in Toronto; she was 95. They are survived by their children and grandchildren and great-grandchildren.

Watching Ruth’s testimony was a moving, inspiring, and heartbreaking experience. Despite everything she had experienced—all the losses, the fear, the separation, the loneliness—she remained a strong, optimistic, and loving woman who spoke about her parents, her husband, her sister, her children and grandchildren with so much affection and warmth. She was not going to be defeated by what happened around her—not while it was happening and not afterwards. How blessed we are to have this testimony to remember what happened and to inspire us all.

30 thoughts on “A Survivor’s Story”