The life of Salomon Blumenfeld, the third child and third son of Abraham Blumenfeld II and Giedel Strauss, took a surprising (to me) turn and landed me in a country I had never before researched—Spain.

According to one source, Salomon moved to Giessen, Germany, where he was the owner of a textile shop. Sometime before 1872 he married Caecilie Erlanger, the daughter of Moritz Erlanger and Rosa Wertheim. She was born on May 16, 1849, in Marburg.1

Salomon and Caecilie had two children. Thekla Blumenfeld was born on March 18, 1872, in Giessen,2 and her brother Felix was born there on May 2, 1873.3 I am very grateful to Michael Moritz for locating their birth records. Michael has been an immense help in my research of Salomon and his family, as you will see more of below. I never would have been able to decipher these records except for Salomon’s name at the bottom without Michael’s help. 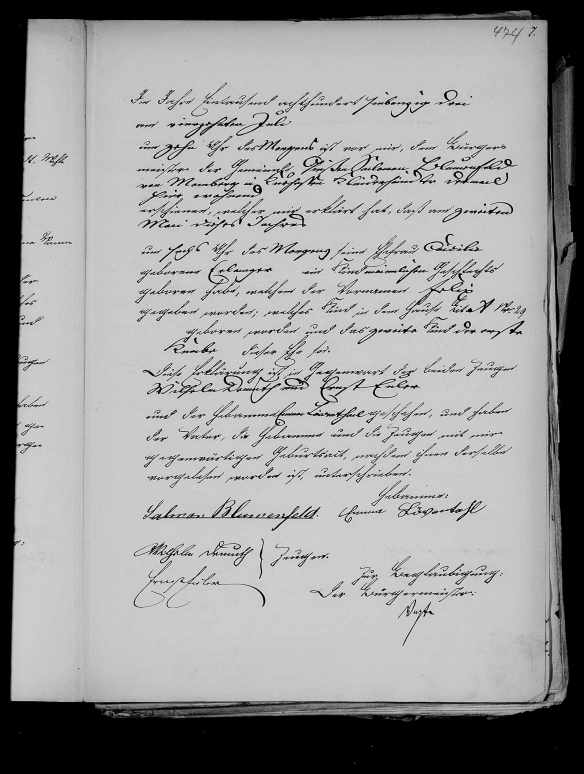 Then just seven months after giving birth to her son Felix, Caecilie Erlanger Blumenfeld died on December 31, 1873, or possibly January 1, 1874 (secondary sources vary, and even with Michael’s help, I cannot find a death record for her). She was only 24 years old, and Salomon was left with two babies, one just seven months old and the other not yet two years old. How was he able to care for those children? Or did he turn their care over to someone else—perhaps Caecile’s family?

I am not sure, but just over two years later on April 18, 1876, he married Emma Bendheim. Emma, the daughter of Loeb Bendheim and Carolina Lichtenstein, was born in Auerbach, Germany, on June 19, 1854.

Salomon and Emma had one child together, a son Moritz, born on January 24, 1877, in Giessen, Germany.4

Sometime within the next six years or so, Salomon, Emma, and Moritz left Germany and moved to Huelva, Spain. It took some digging and the help of Michael Moritz to figure that out. Let me explain my research path.

So I posted a question on Tracing the Tribe that included the marriage record for my Moritz (more on that below), and Michael Moritz provided the answer. What I couldn’t decipher on that record was that Moritz was living in Huelva, Spain at the time of his marriage in 1903, not in Germany where he was born and where he was married.

Michael then searched on FamilySearch for Blumenfeld in Spain and found numerous records indicating that Salomon Blumenfeld, now known as Emanuel or Manuel Blumenfeld, his wife Emma, and their son Moritz, known in Spain as Mauricio, had been living in Huelva, Spain, since sometime in the early 1880s. Here, for example, is the 1888-1889 register for Huelva listing Manuel and Emma Blumenfelt [sic], indicating that they had been residing there for nine years (the last column on the right). (Emma was not 24, but rather 34, in 1888, and Manuel/Salomon would have been 43, not 42.)

This is the 1894-1897 register showing Manuel, Emma, and Mauricio Blumenfels [sic] living in Huelva; this one says they’d been there for ten years. There is no sign of Thekla or Felix, the children born from Salomon/Manuel’s marriage to Caecilie Erlanger.

What would have taken Salomon/Manuel to Spain and specifically Huelva, Spain? Huelva is a port city in southwestern Spain in Andalusia. It experienced tremendous growth in the 1870s and afterward due to the important copper mines located to its north owned by a British mining company, Rio Tinto. The Andalucia website described the impact of the mining industry on Huelva in the following terms:

Huelva was declared provincial capital in 1833 and by the end of the 19th century was undergoing a massive transformation with the influx of foreign capital from mining interests. Its main function as a maritime port became secondary to its industrial importance as mining activities grew, based on the exploitation of the Río Tinto mines by the Río Tinto Company and five other British mining firms.

The mining companies changed the architectural face of Huelva, building industrial structures like the wharfs in the port used for unloading minerals, workshops and the railway. Culturally, Huelva underwent a revival and cultivated a more cosmopolitan atmosphere with the arrival of mainly British and German workers. This was a time of great surplus wealth, which was lavished on elegant edifices in the centre….

The Spanish records that appear above indicate that Manuel was a “sastre” or a tailor, so it would not appear that his specific occupation drew him to Huelva. Perhaps Salomon was drawn by the city’s growth and the potential for personal prosperity. Maybe he just needed to leave behind the tragedy of losing his first wife.

He certainly wasn’t drawn to Huelva for its Jewish community. Although Spain had once been a center for Jewish life, that ended with the Inquisition in the late 15th century when most Jews either converted or left the country or practiced Judaism in hiding or were killed. Even today there are only about 50,000 Jews in all of Spain, and they tend to live in the bigger cities such as Madrid and Barcelona, but not in Huelva or even in Seville, the closest big city to Huelva.

That may explain why Salomon and Emma’s son Moritz/Mauricio returned to Germany to marry. On February 15, 1903, he married Rosa Bendheim in Auerbach, Germany. Rosa was the daughter of Jonas Bendheim and Julie Kapp and was born in Auerbach on September 28, 1883. Jonas Bendheim was a first cousin to Moritz’s mother Emma Bendheim, making Moritz and Rosa second cousins as well as husband and wife. 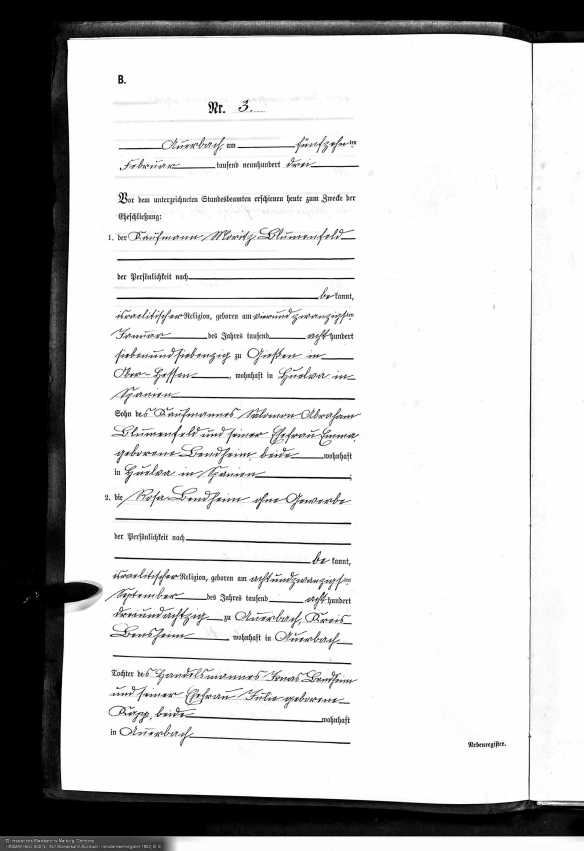 Moritz and Rosa returned to Huelva to live after they married and had one child, a daughter Gertrudis, born in Huelva, Spain, on December 17, 1903.5

The last record I have for Salomon, Emma, and Moritz is the 1905-1906 register for Huelva. It shows that no one in the household had an occupation.

I did find a 1922 ship manifest for Moritz’s wife Rosa and daughter Gertrudis that indicates that Gertrudis was living in Kassel, Germany, but Rosa was living in Seville, and that both were traveling from Hamburg to Seville.6

Another document also indicated that Gertrudis once lived in Kassel, but had left in 1921.

If Rosa was living in Seville, perhaps Salomon, Emma, and Moritz had also moved there sometime after 1905-1906. Or perhaps one or more of them had died by 1922. Unfortunately I cannot locate any record of their deaths nor do I have any record of Rosa’s death. I contacted someone in Seville, but he was unable to find any record of my Blumenfeld family living or dying there. I also asked a native of Seville who now lives in the US and is the son-in-law of our close friends to see if he could find anything, but he also had no luck. So I think I may never find a record for the deaths of Salomon/Manuel Blumenfeld, his wife Emma, or his son Moritz/Mauricio or his wife Rosa.

But I do know what happened to Salomon and Emma’s granddaughter Gertrudis Blumenfeld. In 1922 she married Maximo Jose Kahan. He was born Maximilian Josef Kahn, son of Isidor Kahn and Emma Nussbaum, on August 11, 1897, in Frankfurt, Germany.7

In about 1920, Maximilian left Germany and settled in Madrid, where he became Maximo Jose Kahan. He became a successful writer of essays and books and a frequent contributor to magazines and newspapers. How and where he met Gertrudis is not known. But soon after they married, they moved to Toledo, Spain. Then he and Gertrudis left Spain during the Spanish Civil War and immigrated to Mexico in about 1939.

It appears that Gertrudis remained in Mexico for the rest of her life, dying there on February 3, 1964, at the age of 60.

Maximo, however, left Mexico (and presumably Gertrudis) and immigrated to Argentina, where he died on July 20, 1953. He was 55. As far as I can tell, Gertrudis and Maximo did not have children.

It was a challenge and fun to dive into a brand new country. Now I hope I can learn what happened to Salomon/Manuel, Emma, Moritz/Mauricio and Rosa Blumenfeld.

But in the meantime, what about Salomon’s two children with his first wife Caecile Erlanger, Thekla and Felix? What happened to them?

15 thoughts on “Salomon Blumenfeld: My Cousin in Spain”