Moses Blumenfeld IIA and his wife Fanny Bachrach had two children who predeceased them, Frida and Karl, and three children who survived them after Moses died in 1911 and Fanny in 1928: Antonie Blumenfeld Katz, Hedwig Blumenfeld Kaufmann, and Ernst Blumenfeld. By 1939, all three had died, Ernst at 46, Hedwig at 57, and Antonie at 63. 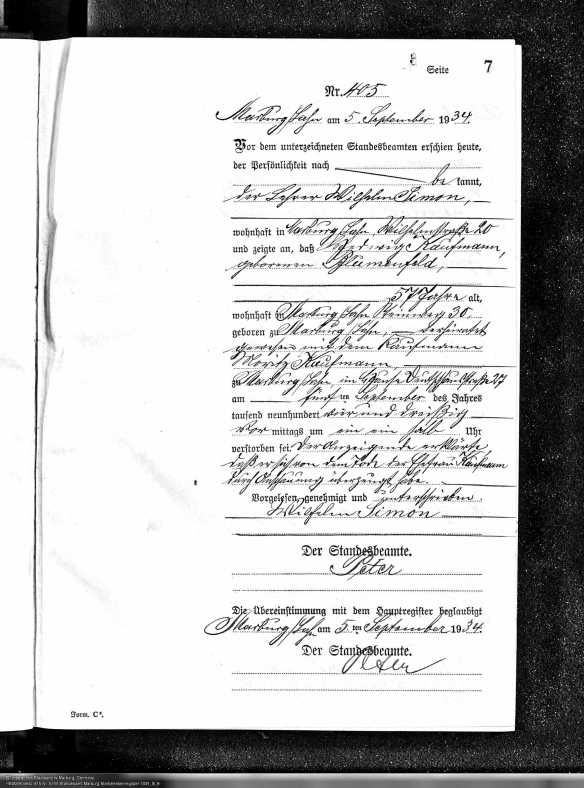 She was survived by her husband Moritz Kaufmann, who died just four months later on January 10, 1935. He was 79 years old. He also died in Marburg.1 I found it interesting to see that Hedwig and Moritz had returned to Germany after living some years in Paris, where their children were both born.

Hedwig and Moritz were survived by those two children. Their daughter Rachel Gertrude Anna Kaufmann (known as Anna) had married Julius Leyser on February 9, 1928, in Marburg. Julius was born in Marburg on June 2, 1898 to Markus Leyser and Lina Baum.2

Moritz and Hedwig’s second child, their son Albert, married Dorothy Alice Schimmelfennig in Berlin on February 10, 1928. Dorothy was born in London on April 11, 1907, the daughter of Leo Schimmelfennig and Cecelia Sarah Pick. As far as I’ve been able to determine, they did not have children. Their marriage ended in divorce.

Ernst Blumenfeld, Moses and Fanny’s only surviving son and last born child, died on April 24, 1935, in Marburg. His three children Lore, Franz, and Paul were only eight, six and three years old, respectively, when they lost their father. Ernst was also survived by his wife Bella, who was widowed at 35.

Antonie Blumenfeld Katz was the first-born child of Moses and Fanny and the one who survived the longest. She outlived all her younger siblings. Yet she was only 63 when she died of uterine cancer on April 24, 1939, in Marburg. She was survived by her husband Moritz Katz and her children Artur/Avraham and Margarete.

Antonie’s death record is one of the very few German death records I’ve seen that listed a cause of death, and it was very useful to resolve a question I had about a document filed at Yad Vashem by Antonie’s son Artur, later known as Avraham. He wrote that his mother Antonie had been murdered. I found this a bit surprising since in April 1939, as far as I knew, Nazis were not generally killing Jewish women in their hometowns in Germany, though certainly there were persecution and deaths even that early. Why would Antonie have been killed at that time? 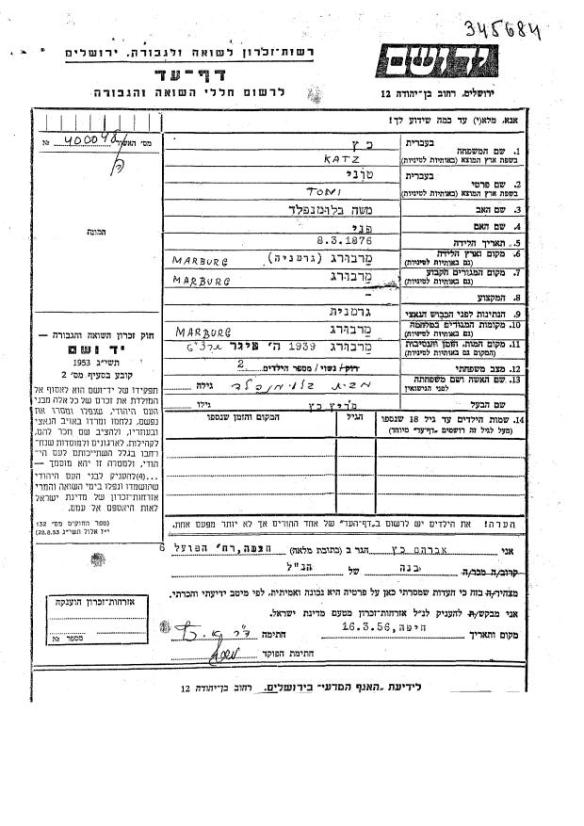 In searching for the answer, I asked for help in translating Antonie’s death record. Kira Dolcimascolo of Tracing the Tribe first alerted me to the fact that the death record included a cause of death and that it was uterine cancer, and  then Cathy Meder-Dempsey and Katherine O’Grady of the German Genealogy group  were able to transcribe and translate the remainder of the cause of death—cancer achexia or extreme weight loss and muscle wasting.

Antonie was not murdered, but died of natural causes, according to her death record. Did her son Avraham not believe the death record? Or did he somehow link his mother’s medical condition to the Nazi persecution going on in Germany in the 1930s? Was she unable to get medical help? Had she refused medical help because of persecution? I don’t know. 5

In any event, by April 1939, all three of Moses IIA and Fanny (Bachrach) Blumenfeld’s children had died. What about the seven grandchildren—the children of Antonie, Hedwig, and Ernst? Their story will be told in the next post.