I’ve had remarkable luck tracking most of the descendants of Moses Cohen, Jr., even with the women who are usually so much harder to track because of the change in their names when they marry.   But when it came to the youngest son of Moses, Jr., and Henrietta Cohen, Solomon Monroe Cohen, I hit a few obstacles.  There are a few things that remain unresolved, but I’ve made a lot of progress.  I thought this would be a good example of just how much luck, persistence, and serendipity it takes to find records about a family member.

As reported in an earlier post, as of 1910, Solomon had married Estelle Spater of Detroit and settled in that city, working as the manager of a mail order business.  They had had two sons, Ralph born in 1907 and Theodore born in 1910.  Theodore had died in 1912 of complications from cerebral palsy.

In 1911 according to a Detroit city directory, Solomon was the general manager of Peoples Outfitting Company, where he was still employed in 1917 according to his World War I draft registration; he described his position as manager of the advertising staff and married to “Stella S. Cohen.”

The 1920 census has him living with Estelle and Ralph, working at a furniture business.  So far my research was moving along easily, just using ancestry.com to find the census report and the Detroit directories. 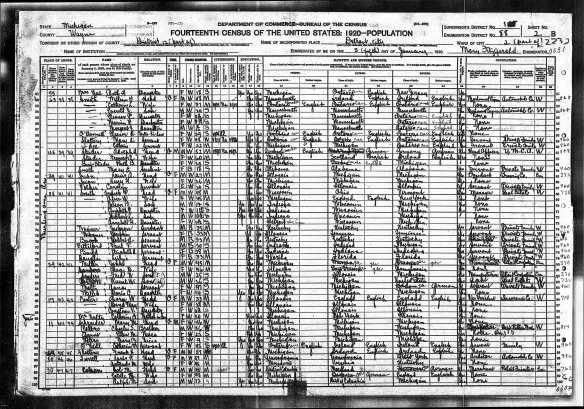 I decided to focus my search on Ralph, figuring that there might be more recent records. I lucked out and found a marriage license application on familysearch.org  for a Ralph Cole to marry Lois Hollander in 1938, and it was indexed with Ralph’s parents’ names, Sol M. Cole and Estelle Spater.

It also indicated that Ralph was born in Detroit in 1907 and that he was in the furniture business, so I knew I had the correct Ralph.  From that application I learned that Sol had changed his name from Cohen to Cole, as had Ralph.  I also learned that Estelle had already died by the time of the application, January 3, 1938.  Finally, I learned that Sol was then living in New York City, not Detroit.  By finding just that one document, I’d gained a lot more information about the family.

Armed with all this new information, I went back and searched again for Solomon and Estelle and Ralph in 1930, but again I could not find any of them.  But as I was searching, I decided to broaden the search beyond the US on the long shot that perhaps they had left the country in 1930.  I did not find them, but on familysearch.org I found a Robert Cole, born in Detroit, Michigan in 1917, whose parents were Solomon Monroe Cole and Estelle Spater.   I actually found four documents for him, all Brazilian immigration documents for different years for his business travel.  Here are two:

I went back to the 1920 census again to see if I had missed a child named Robert in the household of Solomon and Estelle, but he was not there.  Just Ralph.  I checked the next page; no Robert Cole.  If he was born in 1917, where was he? I could not find him with or without his family in 1930 nor could I find him on the 1940 census, again using many different possible locations and variations on his name.  I even searched for all Roberts born in Detroit in 1917, but came up empty.

Then two days ago I went back once again to the 1920 census and decided to look at each page in the enumeration district where Sol, Estelle and Ralph Cohen were listed.  They were listed at the very bottom of page 4; Robert was not on page 5.  But this time I went on to page 6, and there he was at the top of that page, listed as part of the Newcombe household, but the name and age were Robert Cohen, three years old.  Obviously the census reporter had skipped a page and put Robert two pages after the rest of his family and then the indexer had treated him as the son of the family at the bottom of page 5, instead of the Cohen family on page 4.   I can’t tell you how much time I spent on that wild goose chase caused by one simple mistake in the census. 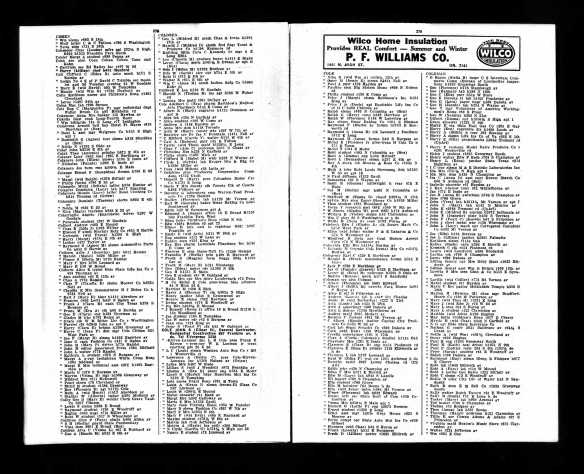 Coles on the 1935 Columbus, Ohio directory

But were they still in Detroit in 1930? Or were they already in Columbus by then?  When had they left Detroit? I found Robert Cole on the Social Security Death Index and saw that he had died in Jupiter, Florida, so I searched for and found his obituary.  According to Robert’s obituary, he attended Grosse Point Academy outside Detroit before attending Brown University.  Since he probably graduated from high school in 1934 or 1935, the family probably had not been in Columbus for very long as of the time of that directory.  Also, I had found several yearbook entries for Ralph Cole at the University of Michigan and knew that he had graduated in 1928, so I assumed that the Coles were still residents of Michigan during that time period.

Then yesterday I decided once more to try the 1930 census, figuring that if I could find an address where they had lived in Detroit close to 1930, it would turn up.  I had already searched for Sol Cohen and Sol Cole in Detroit directories between 1920 and 1935 and had had no luck.  So this time I figured I’d search for any Cole in Detroit in the city directory database.  I found that there were in fact Detroit directories in the ancestry.com database for the years 1930 and 1931.  Since no Sol Cole or Cohen had come up when I searched those, I searched for any Cole, found the directory pages that included anyone named Cole, downloaded those pages for 1930 and 1931, zoomed in, and sure enough Sol was in both.  Ancestry.com must have used an optical character reader to create the index of those directories, and looking at the indices for those two reveals the inadequacy of that method.  It’s mostly gibberish.  Obviously the small typeface and blurry image is too much of a challenge for an OCR.

Anyway, I was now very excited because I had evidence that Sol was still in Detroit in 1930 and 1931, and I had his address and his place of employment.  He was the vice president and general manager of Weil and Company.  Further research revealed that Weil and Company was a home furnishing store, selling furniture and home appliances.

Now armed with the home address for Sol, 5440 Cass Avenue in Detroit, I turned to stevemorse.org to find the right enumeration district in the 1930 census for that address in Detroit. I found the right district, I even found the right pages with the listing of residents at that address.  It was the Belcrest Hotel, a large residential hotel that catered to wealthy residents,  according to Wikipedia.  There were many residents, but not one was named Sol Cole or Sol Cohen.  The closest were Max and Sadie Cohn.  So where were the Coles?  I’ve concluded that they either moved there after the census was taken in 1930 or that for some reason they just were missed by the census taker.

So as of 1931 the family was still in Detroit, but by 1935 they were in Columbus.  Perhaps the family moved to Columbus in the 1930s for economic reasons.  It was the Depression, and Sol may have had to move to earn a living.  Maybe Weil and Company went out of business or Sol lost favor with its owner, Mrs. M.C. Weil. Or maybe they sent him to Columbus to expand the business. I noticed that many members of Estelle’s Detroit family—her Spater brothers—also left their home town before 1940.  Maybe things were particularly bad in Detroit.

Knowing that Sol was living in New York City in 1938, as seen on Ralph’s marriage license application, I was able to locate a death record for him in New York City on June 11, 1938, only six months after the date on that application.  I have not found a death record for Estelle, but I know she died between 1935 and January, 1938.  I have ordered Sol’s death certificate so perhaps that will tell me where he, and possibly Estelle, are buried. 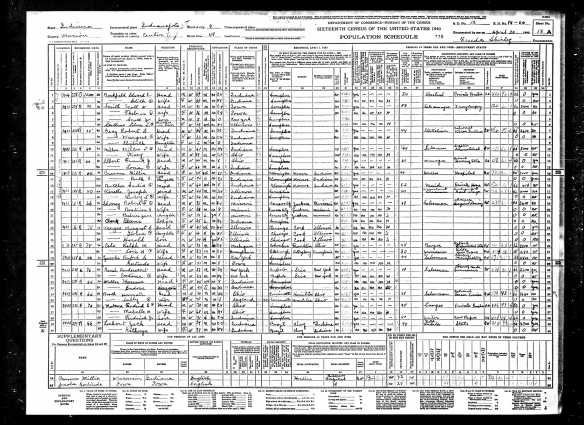 According to his obituary in the July 22, 1998 issue of the Indianapolis Jewish Post, he worked for 32 years for William H. Block and Company and retired in 1971.  He then was active as a volunteer for several organizations in the Indianapolis community as well as assistant business manager of Indianapolis Business Development Board for ten years after retiring.  His wife Lois died in April 14, 1997; according to her obituary in the April 23, 1997 issue of the Indianapolis Jewish Post, she had graduated from Wellesley College and had worked as a journalist for four years and had also been active in many community organizations.  Ralph Cole died the following year on July 17, 1998 at age 91. Ralph and Lois had two children.

Robert Cole died ten years later on February 28, 2008. He also was 91. He had retired to Jupiter, Florida.   His obituary in the Palm Beach Post of March 4, 2008, reported that he had been Executive Vice President at McCann Erickson, the global advertising agency, where he worked for 28 years and been in charge of Latin American operations.  After he retired, he volunteered for the International Executive Services Corp.  Robert also had two children.

I am left with just a few more questions.

Fortunately, I am in touch with a couple of Sol and Estelle’s descendants and am hoping that perhaps together we can find the answers to those remaining questions.

As you can see, it took a lot of false starts, dead ends, jumps and turns, and a lot of different sources to learn the story of Solomon Monroe Cohen/Cole and his family.  That’s what makes this both so much fun and so challenging.

6 thoughts on “How Genealogy Research Works:  Solomon Monroe Cohen as A Sample Case”