Most people know that in Jewish tradition, a child is often named after a relative who is no longer alive.[1]  It is also Jewish practice to identify a person in Hebrew with his or her father’s first name added to that person’s own first name.  For example, on his headstone Joseph’s name appears in Hebrew as Yosef Yakov ben Avraham, meaning that his father’s name was Abraham.  These naming patterns are a great help to genealogical research since often you can find names recurring through several generations, providing a means of establishing family relationships.

For example, we know that Bessie’s Hebrew name was Pessel and that her mother was named Gittel.  Bessie named her daughter Gussie for her own mother—in Hebrew, Gussie’s name was Hannah Gittel.  Then, in turn, I was named for Gussie’s mother, Bessie—in Hebrew, Pessel.  I then named my older daughter Rebecca Grace for my grandmother; her Hebrew name is Rivka Gittel.  So both Gittel and Pessel are names that recur through the generations and perhaps go back even further and perhaps will stretch further into the future.

Similarly, my brother Ira was named for our grandfather Isadore, whose Hebrew name was Ira.  Isadore’s father was Moritz/Moshe, and Isadore was named for Moshe’s father Ira.  Isadore in turn named his son Maurice for his father, and Maurice named his son James Ian and one of his daughters Robin Inez, the I being for Maurice’s father Isadore.  So the M’s and the I’s keep recurring in our family.  My younger daughter Madeline (Mazal Ahava) was named in part for my uncle Maurice (as well as for my husband’s uncle Murray), and there are several other M’s in the family among the fifth generation.

I am sure each of you can find similar recurring patterns in your own branches of the family.  There certainly are many B/P names and J names that run throughout our family tree.   Some of them undoubtedly are for Bessie/Pessel and Joseph or one of their descendants.

Why do I bring this up now? Well, after receiving Abraham’s death certificate and being bewildered by the fact that it records his parents’ names as Harry and Anna, I consulted with my mentor Renee.  She asked me several questions that reassured me that the death certificate is most likely incorrect.  First, she said look for naming patterns.  That reminded me that Abraham’s oldest son was named Joseph Jacob—Yosef Yakov on his headstone. 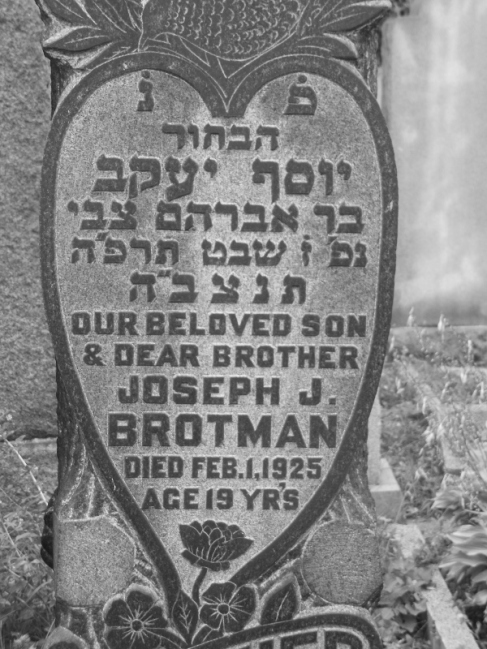 If Abraham’s father was named Harry, then why would he have named his son Joseph and not Harry? In fact, there are no Harrys or H names among Abraham’s children or grandchildren.

In addition, Renee pointed out that Abraham’s full name on his headstone is Avraham Zvi ben Yosef Yakov.  Zvi is a Hebrew name that means “deer” and in Yiddish was usually translated into Hersh or some Americanized version: Harry, Herbert, or (as in the case of my husband) Harvey.  Renee also pointed out that Abraham’s American name was Abraham H. Brotman.  She said it was extremely unlikely that his father’s name would have been Harry or Hersh/Zvi also (unless, of course, his father had died before Abraham was born, which does not seem likely).  By looking at the naming patterns, I am now convinced that it is unlikely that Abraham’s father’s name was Harry and that the death certificate is not correct and the headstone is.  Perhaps the Zvi/H in his name was for his maternal grandfather. Maybe that’s how it ended up on his death certificate.

So, cousins, do you know who you were named for? Do you know what your Hebrew name is? What your parents’ Hebrew names are? It would be really helpful and interesting to me and perhaps to others to know this information as it may open other doors for more research.  If you are willing to share that information, please let me know by using the comment box below so that we can all share this information.  Thank you!

[1][1] At least that has been the tradition among Ashkenazi East European Jews.  German Jews apparently did not always adhere to this tradition.  For example, my father’s name is the same as his father, John Nusbaum Cohen, and until he was an adult, he used “junior” after his name.  Moreoever, his sister’s name was the same as their mother—Eva.