By 1850, as I wrote previously, John Nusbaum and his siblings Mathilde, Leopold, Ernst, and Maxwell were all settled somewhere in Pennsylvania and involved in selling merchandise (except for Leopold, who was a butcher).  In the next decade the family would move around a bit, see their families grow, and endure some terrible tragedies.

The first of those tragedies involved Maxwell.  In 1850 Maxwell was living in Lewistown, working as a merchant in a store that carried his name, M. Nusbaum’s.  He and his wife, Mathilde nee Dreyfuss, the sister of my three-times great-grandmother Jeanette Dreyfuss Nusbaum, had a daughter Flora who was born in 1848.  And Mathilde must have been pregnant in 1850 because on January 30, 1851, their son Albert was born.  Maxwell and Mathilde must have moved to Harrisburg by then because Albert’s birth took place in Harrisburg.

When I searched for Maxwell and his family on the 1860 census, I could not find Maxwell or Mathilde at all, but I did find Albert and Flora Newsbaum, living with an M. Pollock, a Swiss born merchant in Harrisburg.  Unfortunately, the census was barely legible, and the transcriber had had a lot of difficulty recording the names on the census, but by searching generally for M. Pollock born in Switzerland and living in Harrisburg, I was eventually able to find out that M. Pollock was Moses Pollock and that he was married to Mathilde.  The other names on that 1860 census, although transcribed as Mary Pollock, Michael Pollock, and Mary Pollock, were really Mathilde, Emanuel, and Miriam Pollock.  Emanuel and Miriam were Mathilde’s children with Moses, born in 1856 and 1859 respectively. 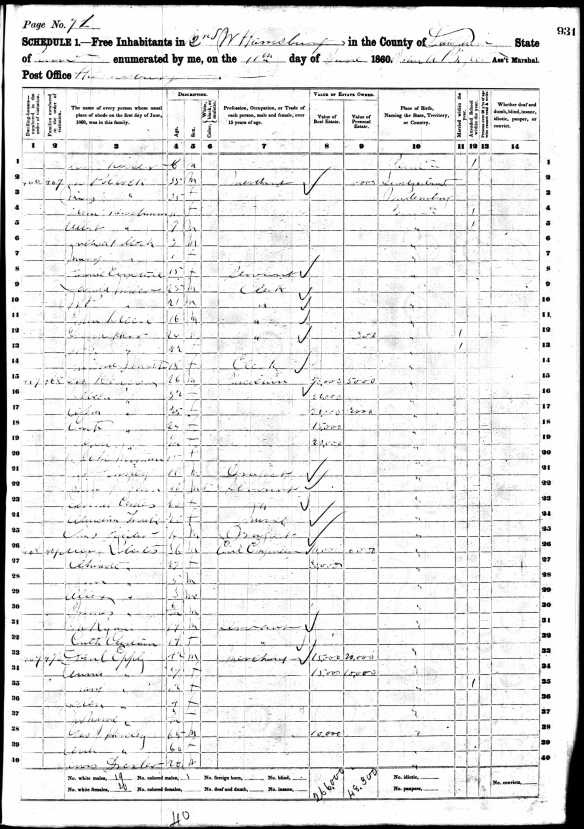 But what had happened to Maxwell? I could find no record of him after the 1850 census, not a directory, census, or death record.  So I turned to newspapers.com and found this terrible news item:

Maxwell had died in San Francisco while trying to protect the property of another business from the raging fires that destroyed much of San Francisco in the spring and summer of 1851.

San Francisco before the 1851 fires Library of Congress CALL NUMBER: DAG no. 1331

The first 1851 fire was described graphically on the website honoring the San Francisco Fire Department, GuardiansoftheCity.org:

The great fire on this day actually began after 11:00 PM on May 3rd, in a store on the south side of Portsmouth Plaza.  A known habitue of villainous Sydney-Town was seen running from the store moments before it exploded in flame and simultaneous fires erupted in the business district.  Water evaporated to steam as swift winds sent the roaring flames everywhere through the great blow-pipe-like hollows beneath the plank streets.  Men in their anguish, ran for shelter within new, fancied “fireproof” brick and iron buildings, only to perish miserably when the metal shutters and doors expanded and couldn’t be opened.  Three-fourths of the city was lost, yet, in ten days, San Franciscans rebuilt one-fifth of their city.

Six weeks later, there was a second horrendous fire:

On June 22, 1851, just before 11:00 AM, a fire, clearly the work of an incendiary, broke out in a frame house on Pacific Street near Powell. Strong summer sea-breezes drove the flames south and east.  Firefighter’s fearless battles were of no avail against the fire’s intense heat and speed.  Ten blocks and portions of six others were destroyed between Powell, Sansome, Clay and Broadway.  The raging demon swept away relics of an older time. City Hall was consumed, born in 1846, and the Jenny Lind Theatre burned for the sixth time.  The Old Adobe Custom House burned, and Sam Brannan’s House, in which were exhibited the first specimens of gold brought from the Placers, met the same fate.  San Franciscans quickly rebuilt again, this time, with water tanks on many roofs. 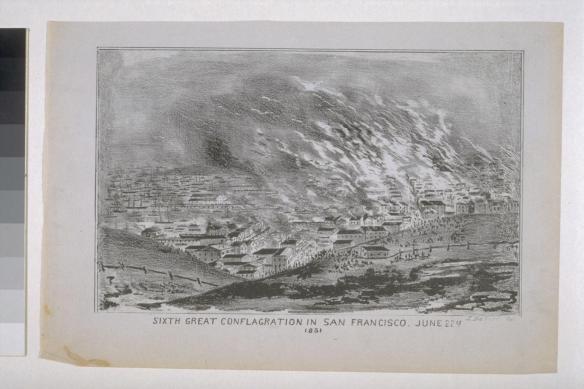 For some reason, neither of these reports indicates how many people were killed in the fire, nor have I yet found any other source that reveals that information.  I have to believe that there were many people killed in addition to my third great-grand uncle Maxwell Nusbaum and his clerk Rosenthal.

I was surprised to learn that Maxwell was all the way in San Francisco, presumably for business.  Was he transporting merchandise to this other merchant in San Francisco? How did he get all the way there? His wife was home with a three year old daughter and a five month old son.  How long would he have been away? How long did it take in 1851 for the news to get back to Mathilde that her husband had died in the fire? Unfortunately, I cannot find the answers to these questions, but I can imagine how dreadful it must have been for her, a relatively recent immigrant with two very young children, losing her husband.

Fortunately, Mathilde had lots of family around for support.  Her sister Jeanette Dreyfuss Nusbaum, my three-times great-grandmother, was also in Harrisburg, as was her other sister Caroline Dreyfuss, who was married to Moses Wiler, and her mother, Mary Dreyfuss, aged 65, born in Germany.  I cannot be completely certain that Mary Dreyfuss was the mother of Jeanette, Mathilde, and Caroline, but given the name, age, place of birth, and the fact that she was living with Caroline, I believe that she was in fact their mother.  Research by others indicated that their mother was named Miriam (Marianna) Samson nee Bernheim Dreyfuss, and the similarity in the name and age to Mary Dreyfuss seems fairly persuasive evidence that Mary Dreyfuss had come with or followed her three daughters to Pennsylvania. (When I first saw the names Mathilde Pollock and Caroline Wiler in the Nusbaum family bible, I assumed they were John’s sisters; only after a lot of research did I finally realize that they were both sisters of Jeanette Dreyfuss Nusbaum.) 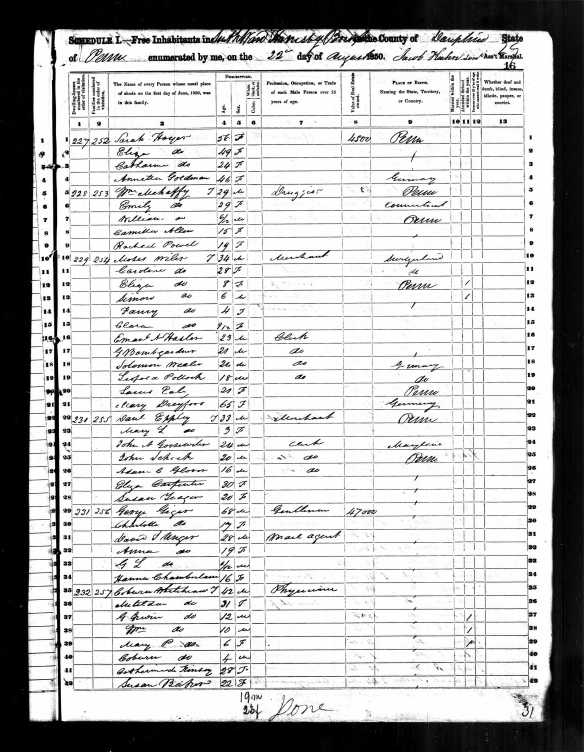 Also living in Caroline and Moses Wiler’s household, in addition to Mary Dreyfuss and the Wiler’s four children, Eliza (1842), Simon (1843), Fanny (1846), and Clara (1850), was an eighteen year old man named Leopold Pollock, reportedly born in Germany, according to the 1850 census.  I do not know what his connection to the household was, but further research revealed that he, like Moses Pollock, was born in Switzerland, not Germany.   My hunch is that Leopold and Moses Pollock were brothers. Moses Wiler, who was about ten to fifteen years older than the two Pollocks and also born in Switzerland, was probably either a relative or friend from back in Switzerland.  The Pollock brothers likely came to Harrisburg in order to be near Moses Wiler, and the Wilers had taken in the teenaged Leopold when he arrived.

When Mathilde was suddenly a widow after Maxwell was killed in the 1851 fire, perhaps her sister Caroline introduced her to Moses Pollock.  Mathilde and Moses must have been married within a few years after Maxwell’s death, given that their first child Emanuel was born in 1856.  I cannot locate Moses Pollock on the 1850 census, so perhaps he arrived after his brother Leopold and then soon thereafter married Mathilde.

And then it gets even more twisted a generation later when Flora Nusbaum, my double first cousin four times removed, married Samuel Simon. Samuel Simon had a brother named Moses Simon.  Moses Simon married Paulina Dinkelspiel, who was the daughter of Mathilde Nusbaum Dinkelspiel, another of my three-times great-grand aunts, another sister of John Nusbaum. So Flora and Paulina were both first cousins (since Maxwell Nusbaum and Mathilde Nusbaum Dinkelspiel were siblings) and sisters-in-law.

It was a small and somewhat twisted world.  No wonder they say DNA testing for Ashkenazi Jews is not terribly accurate.  We are all cousins of each other of some kind or another.