We arrived in Prague after an overnight flight and a four plus hour train ride from Vienna, where we had landed.  Although we slept a bit on the flight and on and off on the train, we were nevertheless a bit groggy when we arrived and were greeted by a cab driver who mercilessly ripped us off by charging 699 Czech crowns (about $30) for a ten minute ride to our hotel, the Prague Marriott (it should have been about a third of that).  It was gray and cool, and my first views of Prague were about the same.  The Marriott is a large and very American seeming hotel, so at first, we could have been anywhere.  A generic room in a generic hotel, a crooked cab.  I was not initially sure why so many people had loved Prague.

But then our guide Andrea Reznickova arrived at 5:30, and everything changed.  Like a good fairy godmother, she waved her magic wand and suggested we walk to Old Town Square to see the famous Prague clock strike the hour at 6 o’clock.  By this time it was raining fairly heavily, so I was skeptical.  The cobblestones along the way were slippery, and I was mostly watching my feet, not the surroundings.  Once we walked through the gate at the Powder Tower at the entrance to Old Town, however, I knew we were no longer in Kansas, as Dorothy said to Toto.  We were in a place that seemed almost as fantastical as Munchkinland seemed to Dorothy. 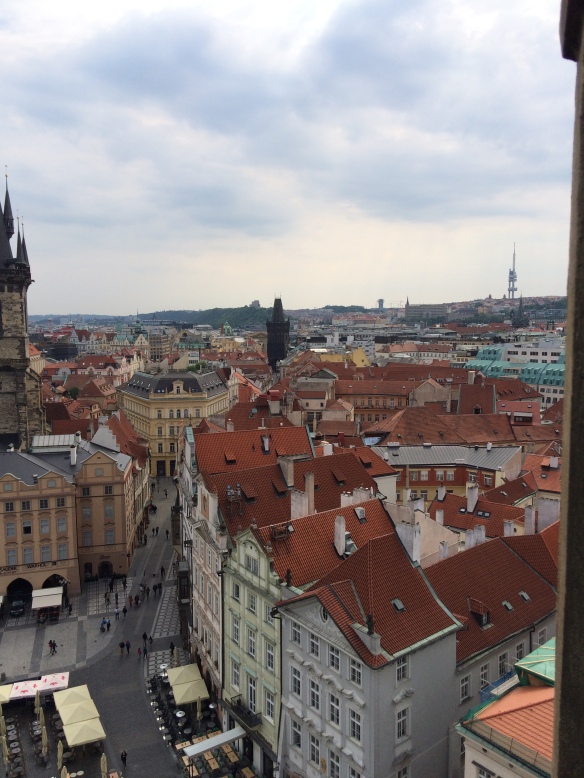 The buildings of Old Town do look like something out of a medieval fairytale—ornate and colorful and built at unpredictable angles that make it seem as if they were created as part of a dream, not a result of any city planning.  The medieval clock with its many faces only adds to the aura of fantasy.  Despite the rain and the many umbrellas raised by the numerous tourists crowding the square, it was enchanting to watch the skeleton start to nod his head and the other three figures—humans defying death—move as the clock began to strike six.  Unlike the clock in Cinderella which ended her magical time, this clock began our magical time in Prague. 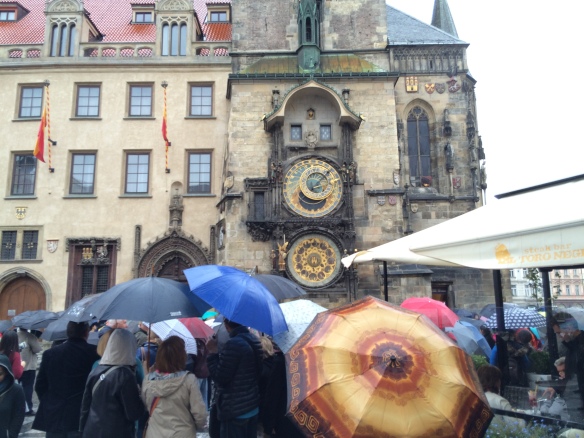 Andrea then took us to a non-touristy pub in New Town for some beer and fresh bread while she gave us an overall orientation to her home town and laid out the plan for the following day.  Then she left us on our own, where we wandered back to Old Town, now feeling somewhat grounded, and walked along the street called Paris Street (as translated from Czech, which I can’t even pretend to try and spell or pronounce), passing all the fancy designer stories on our way to dinner in the Jewish Quarter.  We had reservations at Dinitz, a kosher restaurant, and although it was nothing fancy at all, it was a good way to start the trip.  We were still jetlagged, and some bowtie noodles with chicken was just the right comfort food for a quick and quiet meal.

In fact, it gave us some new energy, and we decided to walk a bit more through Old Town, following the winding streets without consulting a map, just following the crowd until we ended up at the Vtlava River and the Charles Bridge.  It was about sunset (around 8:45), and it was gorgeous.  The entire scene—the river, the bridge itself, the views of the Castle across the river, and those fairy-tale building around us.  We crossed the bridge and then turned back, finally ready to head back for the night.

Sunset at the Charles Bridge, Prague

Of course, like Hansel and Gretel, we got lost once we had no tourist breadcrumbs to follow on the way back, but eventually we somehow ended up at the Old Town Square where the lights on the Tyn Church and on the Clock Tower added to my sense that we were living in a place of fairy tales.  We then easily found our way back to the Marriott. 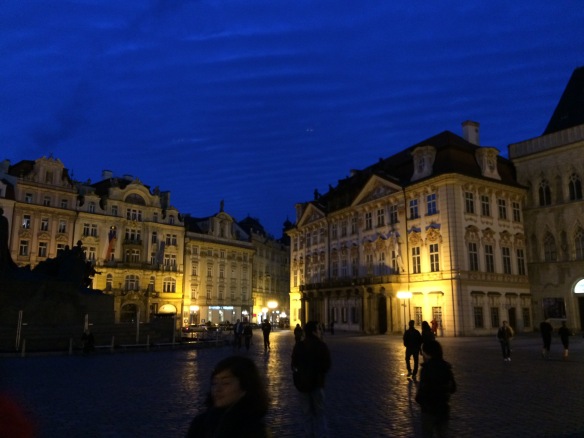 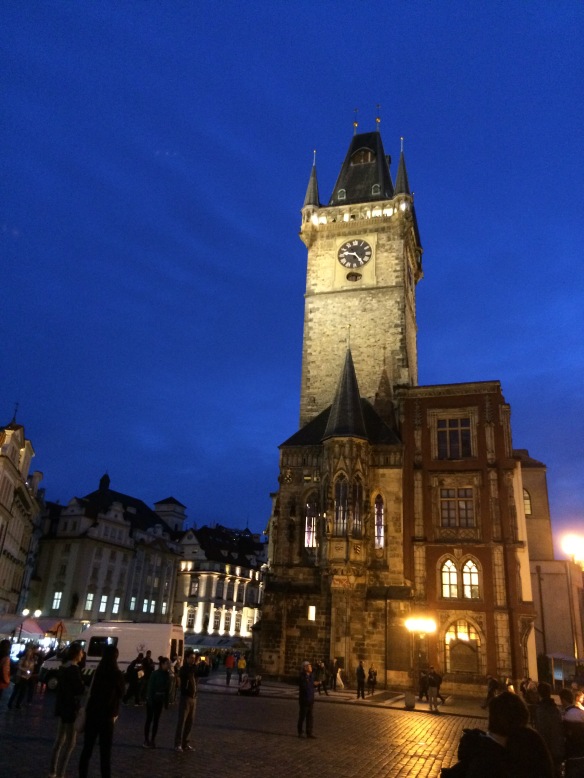 The next morning we met up again with Andrea and took the tram across the river to the Castle District, where along with numerous large touring groups, we entered the Castle area and then beat the crowd to the St. Vitus Cathedral, a huge awe-inspiring Gothic structure that was first built in medieval times and then expanded in the early 20th century, although done so seamlessly that you would never know.

The only clue that part of the building was built in the 20th century was the stained glass window by Alfons Mucha that seemed far too contemporary for a Gothic cathedral.  We had never heard of Mucha before, but would later that day visit the Mucha Museum, a small museum dedicated to the life and work of this Czech artist.  Mucha lived from 1860-1939 and may be best known for his posters of Sarah Bernhardt, but it was his posters promoting Czech pride that moved me the most.

Anyway, back to the Castle district—we wandered through the many squares and streets as Andrea told us about Czech history and politics, both before and after the Communist era.   The Castle was built for the king in medieval times, but is today the residence of the President of the Czech Republic.  When I asked about the presence of the Cathedral in the midst of what was otherwise a government building, Andrea talked about the controversy that arose after the Velvet Revolution and the end of Soviet domination concerning whether the Cathedral would return to the control of the Catholic Church.  In the end it did, so there is a Church-owned property in the middle of the property where the President works and lives.  According to Andrea, religion plays a very minor role in the lives of the Czech people; given the number of beautiful churches we saw throughout the city, that does seem a bit strange.  Perhaps that is one legacy of Communist times—a decline in interest in religion. 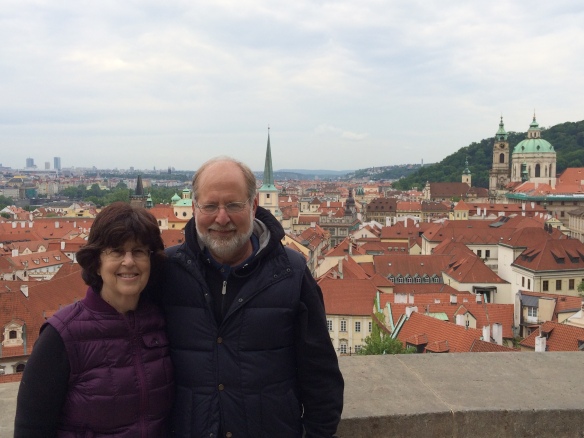 Overlooking Lesser Town from the Castle 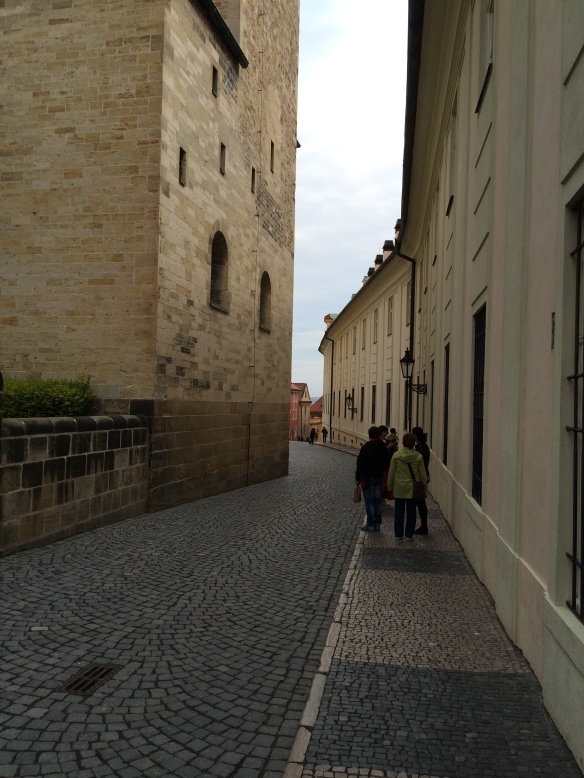 This topic brought us to the whole question of life in Prague during the forty-plus years of Communist control, and over coffee as we exited the Castle area, Andrea suggested we take the tram back to New Town and talk about the 20th century and the Communist era in Prague. At that point the fairy tale aura seemed to dissipate, and the reality of the history of the Czech people became more clear.  As Andrea described Czech history, the Czech people were historically more progressive than those in many other places in Europe.  According to Andrea, it was a Czech, Jan Hus, who really started the Reformation, about a century before Martin Luther.  The Czech people were historically more tolerant of other religions than in many other places, she said. But Andrea said that throughout Czech history different countries grabbed control over their land—including when the Nazis seized Sudetenland in 1938.  Andrea described the failure of the Czechs to fight against that taking as the biggest “black mark” in Czech history.  The Nazi control followed by the Soviet control was demoralizing to the people, but they also were less willing to accept Communism than some of the other countries behind the Iron Curtain.  (I heard similar assertions in Budapest and in Poland, so I take them all with a grain of salt, but it’s not for me to debate the perspectives of the people who live in these countries.)

As we sat in Wenceslas Square in New Town, Andrea then talked about the 1968 Prague Spring, the movement to lift some of the Communist restrictions on life in Czechoslovakia, and the Soviet invasion that followed and brought greater repression; twenty years after that came the Velvet Revolution in 1989, led by students marching into Wenceslas Square, the crowd eventually growing to half a million people.  Although Andrea was just a small child when this occurred, it was clear to us that these events had left their mark on her and that she was very grateful to live in Prague today where there is more freedom to live and work and express oneself as one wishes.

At her suggestion as she left us on our own, we then visited first the Mucha Museum, mentioned above, and then the Museum of Communism, which is situated on the main street in New Town between a McDonald’s and a casino.  It’s a small museum consisting mostly of reading materials with some visual displays, but it effectively evokes the persecution and repression exercised by the Communists during their long reign over the Czech people.  Visiting the museum made us better appreciate just how courageous those protesters had been in their attempts to improve their lives and the lives of their fellow Czechs.

Looking up and down the street in New Town after leaving the museum, we could clearly see that capitalism had arrived.  There were chain stores all over—McDonalds, BurgerKing, KFC, H&M, and so on.  Although Andrea said that the locals all spent their free time in New Town, not Old Town, for me New Town was nothing special.  It could have been almost any commercial street in any American city, except for the foreign language, the statue of King Wenceslas, and the older buildings.  But that’s my American point of view.  What is boring and mundane to me may still be new and exciting to the citizens of Prague.  What intrigued me as a tourist—Old Town and the Castle—may just seem touristy and old-fashioned to those who live in Prague. 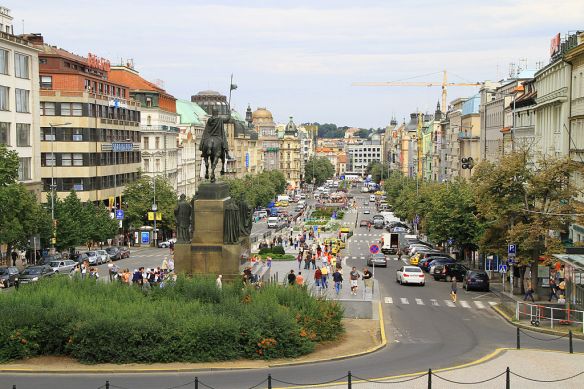 Next—our visit to the Jewish Quarter in Prague.