In my last post, I wrote about the family of Marx and Sarah Seligman.  One of their daughters, Charlotte, had married Max Schlesinger, who worked in the tie industry, and they had had four children, including a daughter Harriet, born 1875.  Harriet had married George Cain in 1897, and on the 1900 census, George and Harriet had one daughter, Edith, born in May, 1900, just a month before the census was taken in June.  George’s sister Lucie was also living with them.

When I found Harriet and George on the 1910 census, I was bewildered.  There were now two daughters, Lucy [sic], aged nine, and Ethel, age eight.

What had happened to Edith?  At first I thought the census taker had just listed Edith by the wrong name.  But then the ages didn’t make sense. Then I thought Lucie was born in 1901, a year after Edith, and then Ethel in 1902. But where was Edith?  Had Edith died? Plus on the 1900 census Harriet reported that she had had one child and one alive, and on the 1910 census she reported that she’d had two children, and two were alive.

I searched on both Ancestry and on FamilySearch, and I didn’t find any death certificates for a child named Edith Cain between 1900 and 1910.  But I did turn up something strange.  FamilySearch had two New York City birth records for daughters born to Harriet Schlesinger and George Cain on the same day, May 28, 1900, one named Edith, one named Lucie. 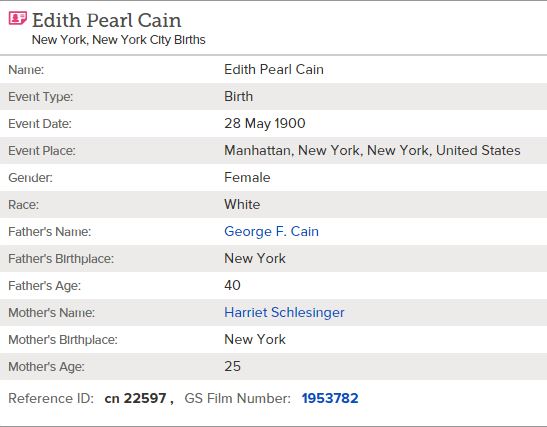 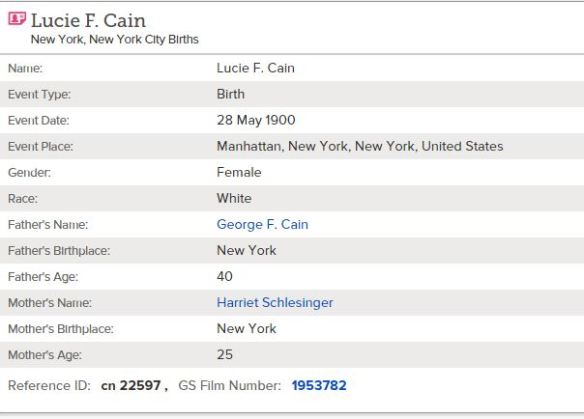 So where was Lucie in 1900? Maybe she had been sick and in a hospital when the census was taken? But then where was Edith in 1910? Had there been twins? Had Edith died? What really puzzled me was that both records had the same certificate number.  Usually if there were twins, there would be two separate certificates each with its own unique number.

But all FamilySearch had were these summaries of the certificates, not images of the actual certificates.  I turned to the New York City Genealogy group on Facebook for some insights.  People there were just as mystified, but one group member, Jim Murray, offered to help.  He was going to the NYC archives two days later and offered to look up and transcribe the two certificates.

What Jim found was that the two certificates were the same as described on FamilySearch, and in addition they had different home addresses for the family.  The one for Edith had 166 W. 122nd St. as the father’s address; the one for Lucie had 202 W. 123rd St. as the father’s address.  I went back to the 1900 census and found that the family was living at 166 W. 122nd Street on June 9, 1900, when the census was taken, just twelve days after the baby or babies were born.

I asked Jim if he had noticed the dates that each certificate was filed, and he said he would go back and check.  In the meantime, I had a brainstorm.  What had happened to Lucie, George’s sister, between 1900 and 1910? Had she married?  She was no longer living with George and Harriet.  A few more clicks on Ancestry, and I found out why.  Lucie had died on June 26, 1900, just a few weeks after the 1900 census and less than a month after Harriet and George’s baby or babies were born.  Had Harriet and George changed their baby’s name in memory of her aunt Lucie?

I waited for Jim’s answer and also waited to receive electronic copies of the actual birth certificates for Edith and Lucie and of the death certificate for George’s sister Lucie.  What I then learned seemed to confirm my theory—that the baby was named Edith at first, but then renamed Lucie after George’s sister died. The first certificate for Edith was filed by the doctor on June 9, 1900; the second certificate with the name Lucie was filed by her mother Harriet on July 6, 1900. I also noticed that the second certificate had both the old address and new address on it with the old address as the place of birth.  I was convinced that the baby born Edith was renamed Lucie after her aunt died.

Somehow the city allowed Harriet to file the second certificate without rescinding the first one so two birth certificates are still on file 115 years later for one baby, born Edith, but then renamed Lucie. 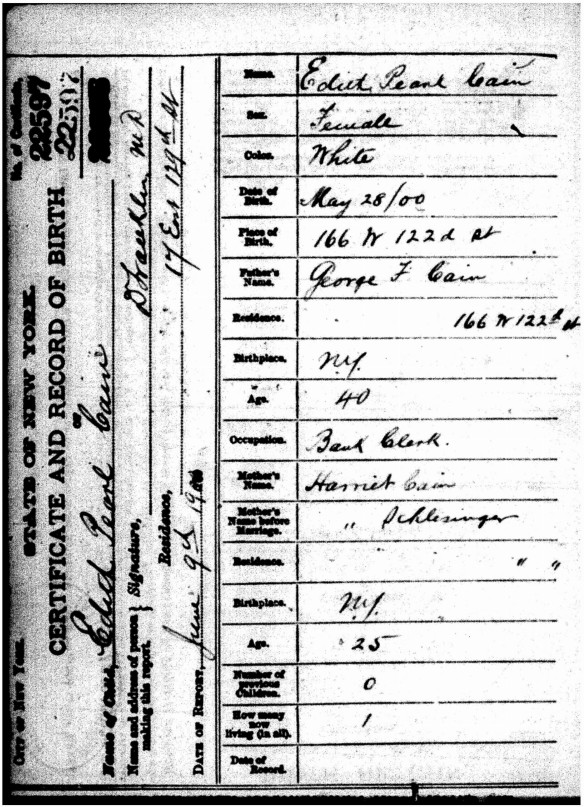 Her aunt Lucie, for whom she’d been renamed, had died at age 38 of chronic nephritis. (Notice that the doctor who signed the death certificate is the same one who filled out the first birth certificate for Edith-Lucie.) 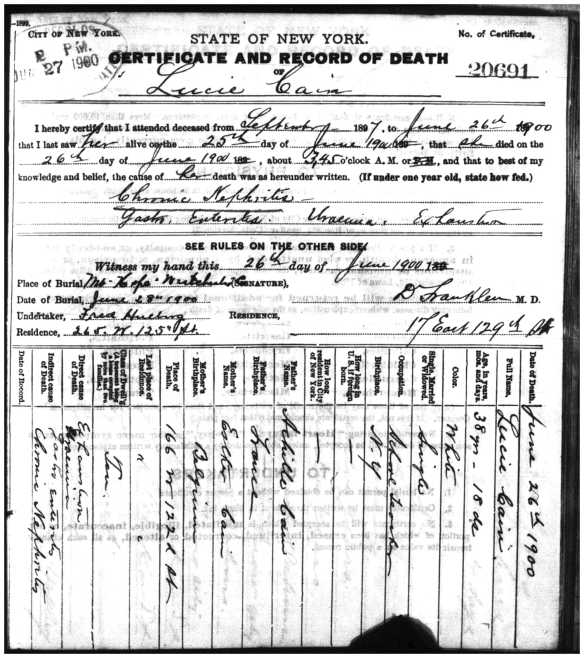 It must have been a time of such emotional turmoil for George and his family—the joy (and strain) of having a newborn baby mixed with the heartbreak of losing his sister at such a young age.  Perhaps the bureaucrat at City Hall had acted out of sympathy, not carelessness, in allowing this second certificate to be filed. And by allowing the first to stay on file, the story of how George honored his sister was there to be discovered 115 years later.

14 thoughts on “The Case of the Disappearing Twin: Edith and Lucie Cain”