Now that I have a better feel for my great-great-uncle Henry Schoenthal and the man he was, I will return to telling his story and that of the extended Schoenthal family with a fresh perspective.  In this post, I will cover the 1890s and the first decade of the 20th century in Washington, Pennsylvania.

My great-grandfather Isidore Schoenthal had arrived in Washington, Pennsylvania in 1881, twenty-five years after his older brother Henry.  By 1890, Isidore had married my great-grandmother Hilda Katzenstein, and they were settled in Washington, Pennsylvania, with their first son Lester.   Their second child, Gerson, was born in 1892.  Although there were several family members just 30 miles away in Pittsburgh, the only other Schoenthal family member in Washington was Henry and his family.  Henry and his wife Helen nee Lilienfeld had three children; in 1890, Hilda was sixteen; Lionel, thirteen, and Meyer, seven.

Henry continued to own a book and stationery store in Washington, as this ad from the 1892 yearbook for Washington and Jefferson College indicates:

In October 1895, Henry’s store suffered $10,000 worth of damage from a fire that also damaged two adjoining stores. 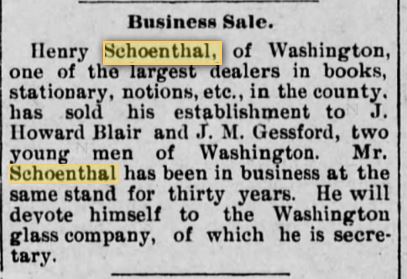 As the news article reveals, Henry was by then involved in the Washington Glass Company, which had been chartered in September 1896 with Henry as one of the founding directors.

Henry is listed in the 1897 Washington city directory as the secretary and treasurer of the Washington Glass Company.

Along with steel and coal mining, glass manufacturing apparently was one of the principal industries in Washington County and in western Pennsylvania generally.  Among the major glass manufacturing companies that existed in the area while my family was living in Washington County were Duncan & Miller Glass Company, founded in 1865 and operating in some capacity until 1980, and Pittsburgh Plate Glass Company, founded in 1883 and still in existence today.  Here are an illustration of a product made by Duncan & Miller and also a photograph of its factory in Washington, PA.

According to Glass & Pottery World, Volume 4, (January 1, 1896, Trade Magazine Assocation), Washington Glass Manufacturing Company “was a new company, just commencing the manufacture of lamp shades, globes, chimneys, and specialties.  A. W. Pollack is president, Henry Schoenthal, secretary, and C.N.L Brudenwald, general manager.  They occupy the plant of the old Washington factory, and are all prominent men and have the prospect of success before them.”

1897 was a big year for Henry in other ways.  He and Helen celebrated their 25th wedding anniversary that year.

Thanks to Carly at the Heinz History Center at the University of Pittsburgh, I now finally have a photograph of Henry Schoenthal and of his family.  The photo was taken in 1897 on the occasion of Henry and Helen’s 25th anniversary and was used again in 1922 when they celebrated their 50th anniversary.  It is on file with the Rauh Jewish Archives at the Heinz History Center. 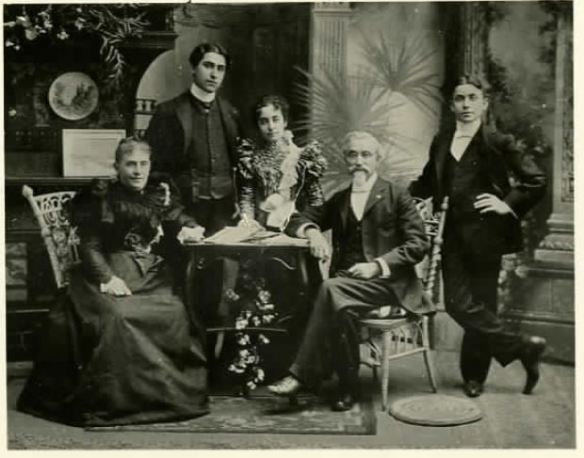 Henry certainly was a prominent man.  He was described this way in the Beers biography written in 1893: “Henry Schoenthal … by a life of plodding industry and judicious economy, coupled with keen foresight and characteristic prudence, has risen to no small degree of prominence as one of the well-to-do and progressive citizens of Washington borough.”  He was a member of four secret societies: A. F. & A. M., Heptasophs, Royal Arcanum, and Protected Home Circle as well as president of the local B’nai Brith lodge and a founding member of Beth Israel, the synagogue.

I am not sure exactly what my great-grandfather Isidore was doing for a living in the early part of the decade, but by 1897 he was listed in several business categories in the Washington directory: cutlery, china, glassware, lamps, and house furnishings.  I assume that his lamps and glassware were at least in part the products of his brother’s company.

On the 1900 census, Henry described himself as a china merchant.  All three of his children were still single and living at home.  Lionel, 23, was a merchant and a violinist. He had graduated from Washington and Jefferson College in 1899 with a Bachelor of Science and had also participated in the Glee Club and played the violin in the Mandolin Club.

When the new courthouse was dedicated in Washington in November 1900, Lionel led a twelve piece string orchestra at the festivities.

Henry and Helen’s younger son Meyer was sixteen in 1900 and was working as a china salesman.  Their daughter Hilda and her mother Helen were not employed outside the home.

My great-grandfather also listed himself as a merchant on the 1900 census.  His children Lester and Gerson were now eleven and eight years old, respectively. A third child, their son Harold, was born in Washington on August 28, 1901.  In the 1903 directory for Washington, Pennsylvania, Isadore and Hilda were living at 47 South College Street, and Isadore’s store was at 106 South Main Street; he was selling china, glassware, and house furnishings. He even had a telephone.

Sometime between 1900 and 1903, Henry’s older son Lionel married Irma Silverman; he seemed to be in a business competing to some extent with his uncle Isidore, as he was also selling china as well as books, stationery, toys, and fancy goods. Lionel had phones both in his store and at his residence.

In 1903, his father Henry was living at 203 East Beau Street with his wife Helen and their other two children, Hilda and Meyer, both of whom were working as clerks for their brother Lionel.  Henry was now an agent for New York Life Insurance Company.

On March 4, 1904, my great-grandparents had their fourth child and first and only daughter, my grandmother Eva.  She was a truly beautiful baby.

In 1905, another child joined the family.  Henry and Helen’s son Lionel and his wife Irma had a baby girl on March 22, whom they named Florence.

Aside from these new babies in the family, nothing much changed between 1903 and 1905, as seen in the Washington directory for 1905.

My great-grandfather was still selling china and glassware, now at 15 North Main Street, and the family had moved to 196 Allison Avenue; Lester, however, was living at the 47 South College Street.  He would have been seventeen years old; the directory says he was a student, so I assume he was living at and attending Washington and Jefferson College. 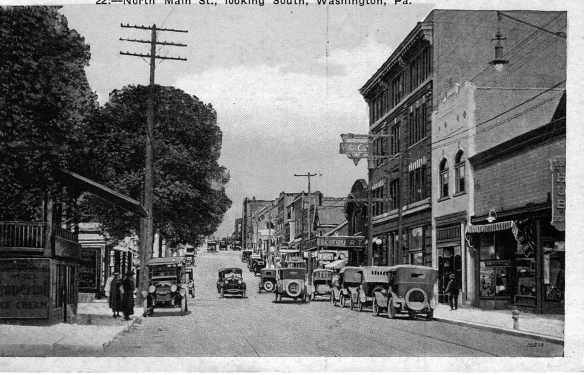 But things did not stay the same after that.  My great-grandparents may have thought that they were permanently settled in the comfortable surroundings of Washington, Pennsylvania, with Henry and his family close by and other relatives not too far away.  But their son Gerson had developed asthma, and the doctors had recommended that they move to a drier climate.  So by 1907 Isidore and Hilda and their four children had moved all the way to Denver, Colorado.  The 1907 Denver directory only has a listing for Isidore and their residence without an occupation, but in 1908 there is a listing for Lester as a bookkeeper.  Isidore still has no occupation listed.  In 1909, however, he is listed as working as a clerk for the Carson Crockery Company, a well-established distributor of fine china.

By 1910, he was the manager of the crockery store, according to the census report and this advertisement I found in the December 15, 1911 edition of the Denver Post (p.2).

My great-uncle Lester, now 21, was a hospital apprentice for the US Navy. His brother Gerson, now 18, had a clerical position in an office.  All four children were still living with their parents.  Harold was nine, and my grandmother was six years old.

Things were also changing back in Pennsylvania for my great-great-uncle Henry Schoenthal and his family.  As Hilda wrote in her biography of her father, her brother Lionel moved to New York where he worked for Gimbels.  On the 1910 census he listed his occupation as a china buyer.  His parents moved to New York City to be near him in March, 1909, according to Hilda, and in 1910 they were living with Lionel, his wife Irma, and their daughter Florence. Henry was still working as an agent for New York Life.

The former New York Life Insurance Company Building, also known as the Clock Tower Building, at 346 Broadway between Catherine and Leonard, was expanded from the original building by Stephen Decatur Hatch and McKim, Mead & White, between 1894 and 1899. (Photo credit: Wikipedia)

I found a detailed biography of Henry and Helen’s other son Meyer written in 1922, which reported on Meyer’s early life as well as his adult life:

The public schools of his native city afforded Meyer L. Schoenthal his early education, and after leaving school he gained most valuable experience through his association with his father and older brother in the china and glass business and the manufacturing of glassware. With these lines of enterprise he continued his active connection at Washington, Pennsylvania, until 1907, when he was called to Belleville, Illinois, to assume charge of the promotion of a theater enterprise. He remained there one year, and met with success in effecting the erection and equipment of a modern theater, and for the ensuing two years he represented New York manufacturers in .the Middle West. In 1910 he married, and in the same year he and his wife established their home at Los Angeles, California…

In 1910, Meyer married the former Mary McKinnie, as seen in this news clipping from The Daily Post (Canonsburg, Pennsylvania, January 10, 1910), p. 1:

The Washington Seminary was a Presbyterian seminary for women.  I wonder what Henry Schoenthal thought of his son Meyer marrying a young woman who was not Jewish and from so far away.  The 1910 census reports that Meyer and Mary Schoenthal were living in Los Angeles, and Meyer was working as a manager for an investment company.

I could not locate Hilda Schoenthal, Henry and Helen’s daughter, on the 1910 census, but she appears in the 1911 directory for Washington, DC, working as a stenographer.

Thus, by 1910 all of Henry Schoenthal’s family had left Little Washington as had the family of my great-grandfather Isidore.   In both cases it was their children who had provided the reason for the move.  Isidore and Hilda moved to find a better place for their son Gerson.  Henry and Helen moved to be closer to their son Lionel.  Little Washington must have been too small to provide sufficient opportunities for the next generation.

They all had left before the big centennial celebration in Washington, commemorating its founding in 1810.

There were, however, representatives of the extended family still there: the sons of Jacob Schoenthal, the Schoenthal brother who never left Germany.  More on them in a later post. First, I need to catch up with the members of the family who were living in Pittsburgh as the 19th century moved into the 20th.

17 thoughts on “Henry and Isidore:  The Schoenthal Brothers in Little Washington 1890-1910”