Why did we go to Worms? Not for any genealogy reason, but for its significance to Jewish history generally and to German Jewish history more particularly. It is one of the so-called ShUM cities, the three cities (Speyer (Sh), Worms (U), and Mainz (M) where Jewish scholars and rabbis in the Middle Ages had a widespread impact on Jewish religious and cultural practices.  Some of the greatest medieval Jewish scholars studied and taught in the ShUM cities, including Rashi, who is considered one of the greatest Talmudic scholars of all time. Many of the melodies used even today in Jewish religious services were developed in the ShUM cities. It seemed that it would be wrong to go all the way to Germany and not see Worms.  (Speyer, unfortunately, we could not fit into our itinerary, and we had seen Mainz.)

Worms is a short train ride from Heidelberg, so it made sense to go there during one of our three days in Heidelberg.  On May 13, we took a morning train to Worms to meet our tour guide. [For various reasons we were not very pleased with this guide, so I’ve decided not to use her name in this post. If anyone wants to know why, I will be glad to share privately but not on the blog.]

The guide met us at the train station and showed us the reliefs sculpted over the doorways to the train station, one showing different modes of transportation and the other, the doorway used by the wealthy, showing kings and nobles.  The station was built in the early 1900s and, as the guide said, was considered a sign of modernity and of the status of Worms as an important city. 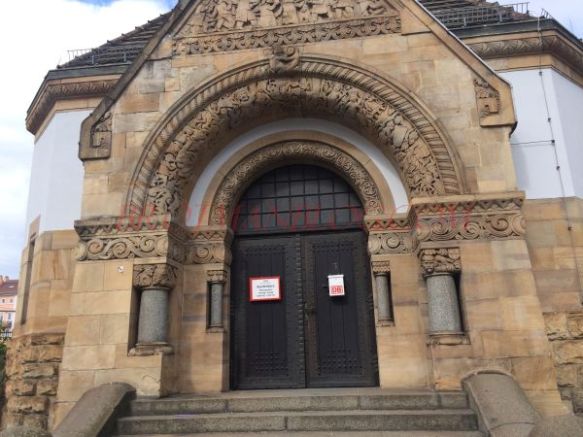 From the station we walked a few blocks to the Jewish cemetery, which has existed since the eleventh century and is considered the oldest Jewish cemetery in Europe.  We could not enter as it was Shabbat (Saturday), and the cemetery was closed.  But we could see the old stones and the very well-maintained grounds. The guide told us about some of the important scholars buried at the cemetery and how the cemetery is a pilgrimage site for Jews from all over the world.

From the cemetery we walked through a park where there was a statue of Martin Luther, for whom Worms was also an important city because, according to the guide, it was in Worms that his movement for Reformation became a movement adopted by the people, not just a theoretical idea. The guide also pointed out to us that the park we were walking through was where the moat had been located when Worms was a walled city in medieval times.  Once the wall was taken down and the moat filled, it became a ring of green space surrounding the city.

We continued to follow the former moat towards the old Jewish quarter in Worms. Along the way we passed several stolpersteine, including one for Herta Mansbacher, who is considered an important heroine in the story of the Jews of Worms.  She was a teacher in a non-Jewish school until 1933 when she lost her job and took a teaching job in a Jewish school.  She then stayed in Worms to help the children and to encourage families to emigrate from Germany.  After the Worms synagogue was burned during Kristallnacht, Herta Mansbacher ran to rescue what she could and to try and put out the fire.  In 1942, she was deported and murdered by the Nazis.

Stolpersteine for Herta Mansbacher and others

A short distance past the home of Herta Mansbacher we reached the former Jewish quarter of Worms. Turning left on Judengasse it felt like we had entered not only a difference place but a different time. You could visualize what the quarter was like a hundred years earlier.

The Jewish quarter in Worms 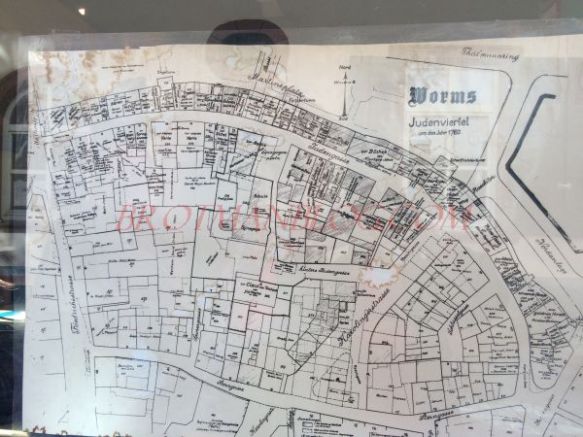 There are two synagogue buildings in the Jewish quarter.  They are located at opposite ends of a small plaza in the center of the quarter. The Levy’sche synagogue is now a residential building. 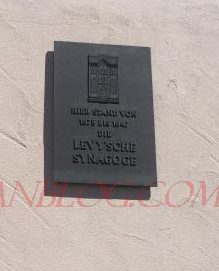 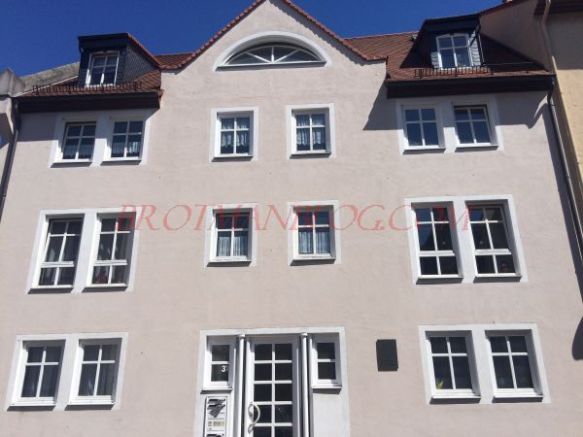 Across from it was the other synagogue, the Old Synagogue—where there is a sculpture commemorating Rashi; Rashi studied at the yeshiva attached to this synagogue.  The building dates from the 12th century and is claimed to be the oldest synagogue in existence north of the Alps.   The building is today used for religious purposes and also for cultural events. There is a separate building where the yeshiva was located and also a mikveh on the grounds.   Behind the synagogue is a Jewish museum displaying Judaica and historical documents from the region; the most moving display was of the Torah scrolls and wimpels that were burned during Kristallnacht.  Perhaps these were the ones rescued by Herta Mansbacher, for whom there is a memorial plaque in the synagogue. 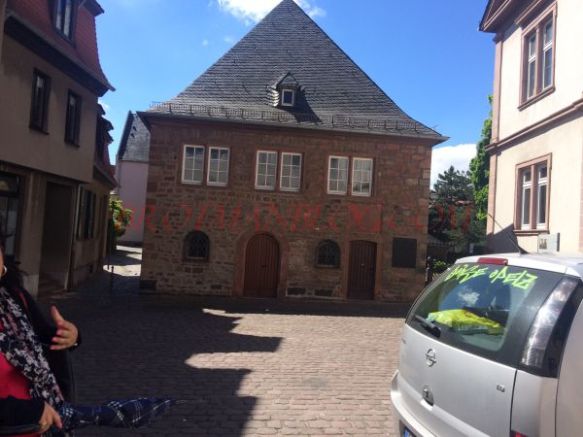 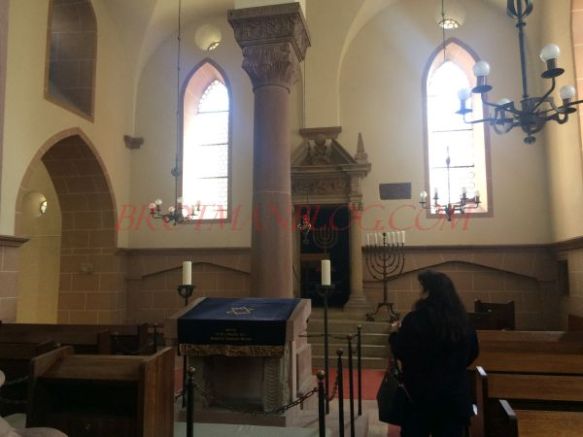 The synagogue was rebuilt after the war, but some of the original structure still was standing and is part of the building today.  Seeing the Jewish quarter allowed me to imagine in a concrete way how the Jews once lived in this section of the city.

After leaving the Jewish quarter, we stopped for lunch, and then the guide showed us Trinity Church, a very large Lutheran church built in the 18th century.  It was destroyed by Allied bombing in World War II and rebuilt in the 1950s. 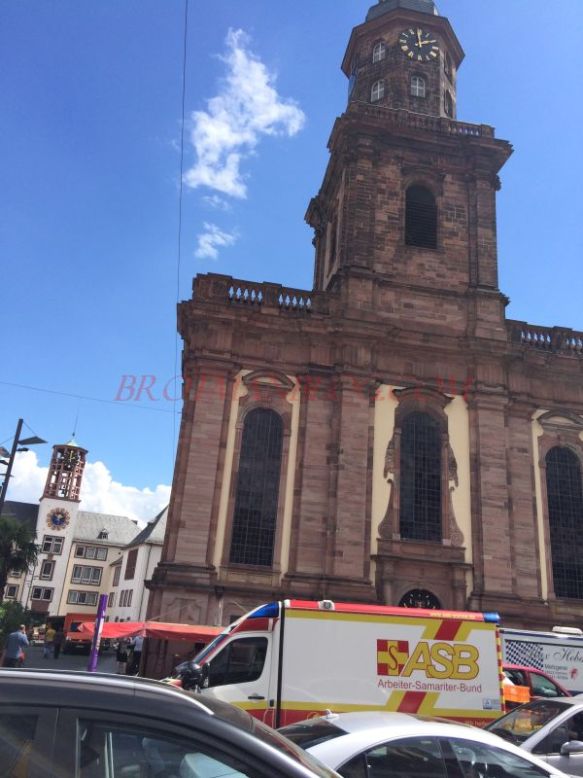 Our last stop in Worms was at St. Peter’s Cathedral, which was built in the 12th century.  It is an impressive structure, and the altar is quite elaborate and beautiful. 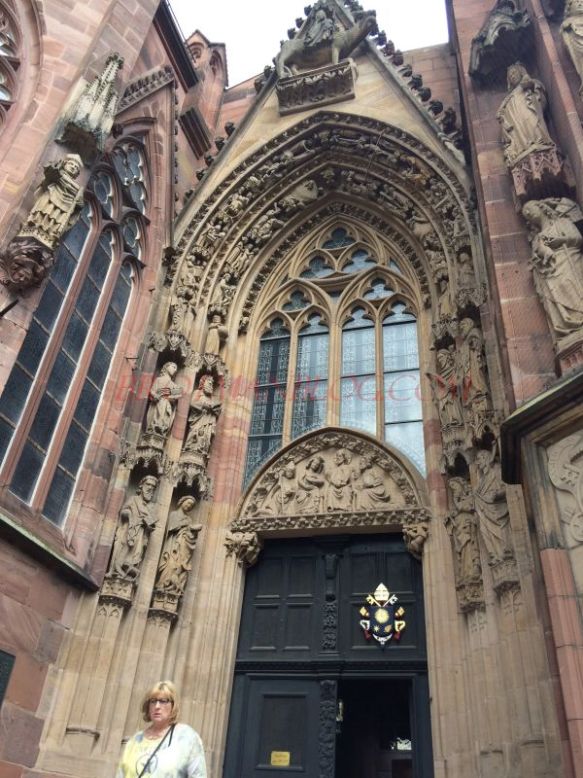 We then walked back to the train station and returned to Heidelberg.

The next day, our last day in Germany, we were back on our own.  We took the funicular up to the castle that hovers over the city and can be seen quite dramatically from across the river.

We strolled around the grounds where the views of the river and the city of Heidelberg are stunning. Because you cannot get into the castle without a guided tour, we waited for the guided tour at 10 am.  Fortunately there were only three of us on the tour, plus the guide.  (There were hundreds of people wandering around the grounds being led by Viking Cruise guides, all with earplugs in their ears to listen to their guides, but they did not enter the buildings.) 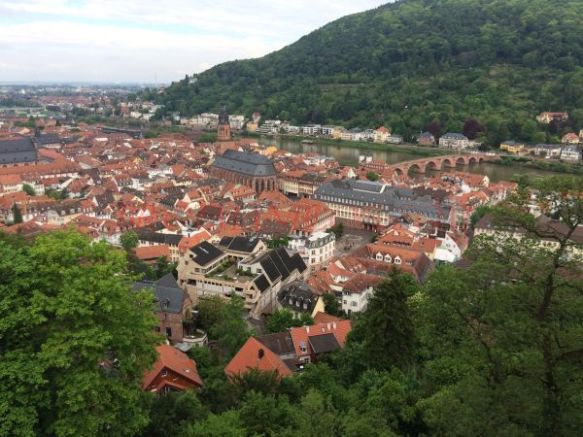 The guide was delightful with a very dry and sarcastic sense of humor, and we all got a big kick out of him.  He entertained us with stories of political intrigue, romance, and wars to give us the colorful history of the complex of buildings that make up the castle.  The castle predated the city; it was originally built for strategic purposes with its towers and walls overlooking the valley below. Then, as medieval times moved into the Renaissance era, it became more a home for the local noble to impress his wife and entertain their guests.  Even Hitler used the castle at some point as a place to house soldiers.  I wish I could remember all the details of the guide’s stories, but suffice it to say he kept us interested, and he not only was amusing but very well-informed about the history of the region. 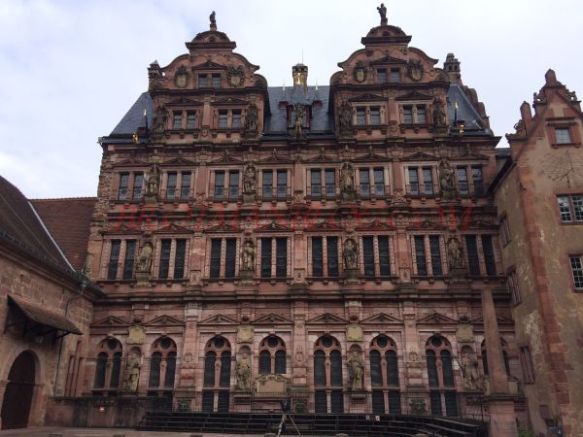 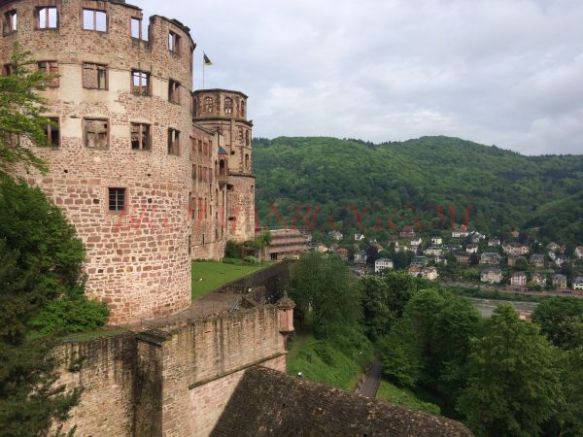 After returning to the city below, we spent our last afternoon in Germany wandering through the beautiful city of Heidelberg.  Unlike every other city we’d visited—Mainz, Bingen, Cologne, Wurzburg, and Worms—Heidelberg did not sustain any significant damage from Allied bombing during World War II, so it retains its architectural heritage as originally built. 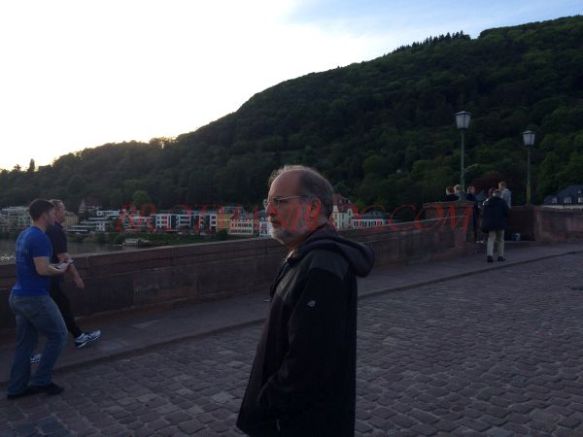 The city has so much to offer—a world-renowned university, a scenic location on the Neckar River, a fascinating castle with gorgeous views, and churches and buildings that are rich in architectural detail.  The winding narrow streets and wide plazas, the youthful population, and the multitude of restaurants, bars, and stores make it an interesting and exciting place to visit. It made it all that much harder to pack our bags and head to the airport where we would stay our last night in order to catch our flight the following morning.

And so we said Auf Wiedersehen to Germany, land of my paternal ancestors, a country I had truly learned to appreciate during our stay, a place where the beer, the bread, the cities, the villages, the landscapes, and especially the people are just wonderful.  I was sad to leave, but ready to come home and have a chance to digest and remember it all.

Looking back on the trip now that we have been home for well over a month, it almost seems like a dream.  Was I really there? Did I really walk in the footsteps of my ancestors, see their gravestones, and meet my cousins, their descendants? Writing these blog posts has helped me remember and process everything we saw and experienced.  Looking at the photographs reminds me of all the people we met and all the beauty we saw as well as all the reminders of what happened during Hitler’s reign.

Much of what we experienced was bittersweet—bitter because of all the awful killings and destruction, sweet because of the kindness of the people we met and the hope they gave us for a future where people are tolerant and understanding and loving of each other despite their differences.  As I now return to the task of learning about and writing about my family’s history, I can better visualize where they lived and what their lives were like.  It will make what has already been a fascinating and rewarding journey that much more meaningful and satisfying.

Thank you for following me on this journey.