I still have some work to do on two of the previously-mentioned descendants of Jakob Katzenstein’s oldest daughter Gelle and her husband Moses Ruelf, and I am working on some leads right now and should have updates soon on both Rosa Abraham Zecherman and Hugo David. But for now I am moving on to Gelle’s younger sister Mina and her descendants.

Once again, my family tree looks more like the roots of a mangrove than the usual image of a tree with outstretched and separate branches.

At first I thought Mina was going to be a tough brick wall because I was researching her under the name Michaela.  The starting point of my research into the family of Jakob Katzenstein and Sarchen Lion was a handwritten document sent to me by Barbara Greve that had been prepared by a Reverend William Bach sometime after 1824; it listed the names of the children of Jakob Katzenstein and Sarchen Lion as follows:

As you can see, Reverend Bach had listed their second child as Michaela with a birthdate of May 29, 1832. But I could not find a birth record or any record for a person with the name Michaela Katzenstein.  And none of the other secondary sources for Jakob Katzenstein and Sarchen Lion listed a daughter named Michaela.

But as I was searching for Michaela on Ancestry.com, I noticed a listing of a death record for a Mina Katzenstein and decided to take a look. My gut instinct proved to be correct: Mina Katzenstein was the daughter of the merchant Jakob Katzenstein and Sarchen geb Lion. She was 64 when she died on September 5, 1896, meaning she was born in 1832, just as “Michaela” supposedly had been. I knew this had to be the same person and that her real name was Mina, not Michaela. 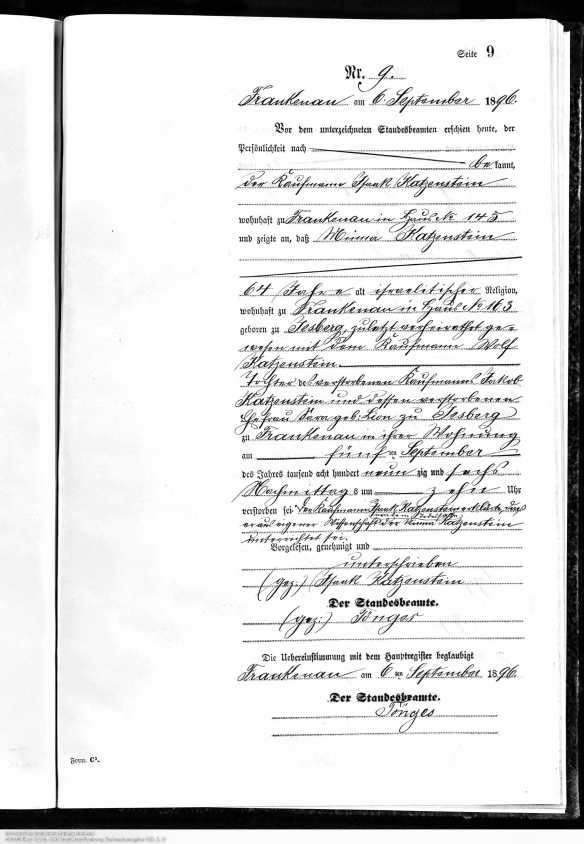 The death record also revealed that Mina was the wife of Wolf Katzenstein and that she had been living in Frankenau, Germany, at the time of her death.

Now that I knew Mina’s actual first name, I was able to uncover several other important documents, including a marriage record for her marriage to Wolf Katzenstein:

They were married in Frankenau on July 27, 1858.  Wolf was not, as far as I can tell, a cousin. His father was Manus Katzenstein, born in Frankenau, and I’ve yet to find a familial connection between the Frankenau Katzensteins and the Jesberg Katzensteins. Wolf’s mother was Roeschen Mannheimer.

When I initially only found two children born to Mina and Wolf, I thought that this part of the family would be much easier to research than that of Mina’s older sister Gelle Katzenstein Ruelf. But the more I looked, the more I found, and things became more and more complex.

Mina and Wolf in fact had five children, all born in Frankenau: Rosa (1859), Karoline (1861), Manus (1863), Rebecca (1865), and Regina (1867). I located them by searching page by page through the birth register for Frankenau starting the year after Mina and Wolf’s marriage up through 1875. If there were others born later or elsewhere, I’ve not yet found them.

All five of those children lived to adulthood and were married, and four had children. And sometimes they married cousins within the Katzenstein family, making the research and the story even more convoluted. So from what I thought would be a simple one-post story of Mina and Wolf Katzenstein, I now have several posts to write about the large, extended family.

This post will outline the growth of the family from 1859 through 1915. Subsequent posts will focus on each of Mina and Wolf’s children and their respective offspring.

Rosa, the oldest child, was born on June 19, 1859, in Frankenau, eleven months after her parents’ marriage.

She married Salomon Feist Katz on June 18, 1881, when she was 21 years old. Salomon was born on September 29, 1852, to Joseph Feist Katz and Brendel Katz, both of whom were born in Jesberg, as was their son Salomon.

As you might have guessed, Salomon Feist Katz was also related to me and to his wife Rosa. We are all descendants of my 6-times great-grandfather Pinchas (Bonum) Katz.  Rosa was my second cousin, twice removed, and Salomon my third cousin, three times removed.

The numerous familial relationships between Rosa and her husband Salomon Feist were, for some reason, beyond the ability of my Family Tree Maker software to calculate, so I substituted Rosa’s sister Regina for Rosa and compared her to Salomon’s father Joseph Feist, and they came up as second cousins, twice removed, meaning that Regina and Salomon were third cousins, once removed, and thus so were Rosa and Salomon.

Mina and Wolf’s second child was Karoline. She was born on March 30, 1861, in Frankenau: 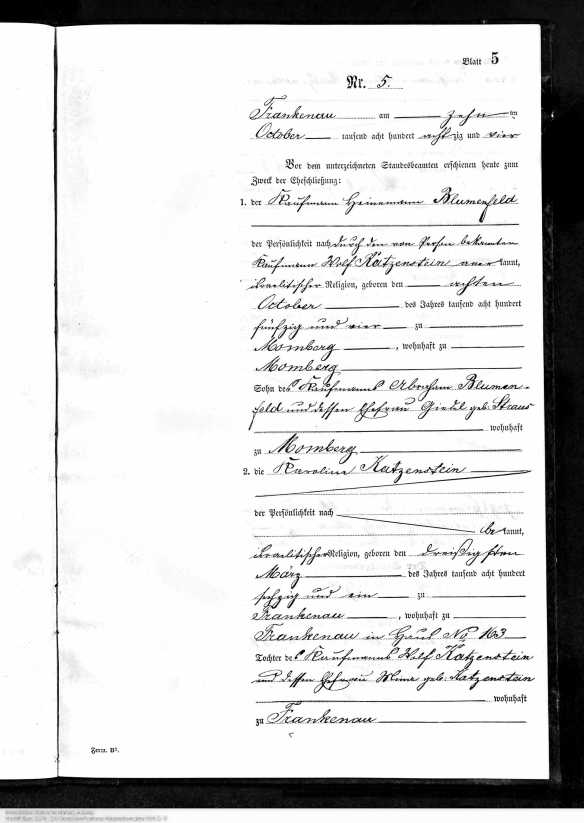 Manus Katzenstein was the middle child and only son of Mina and Wolf. He was born on April 23, 1863, in Frankenau.

He married Fanny Bickhardt of Hoeringhausen, Germany, on November 18, 1891.  Fanny was born in Hoeringhausen on June 6, 1868, daughter of Abraham Bickhardt and Esther Lion. Manus and Fanny did not have children as far as I’ve been able to determine.

Wolf and Mina’s fourth child was Rebecca, born on August 28, 1865, in Frankenau. 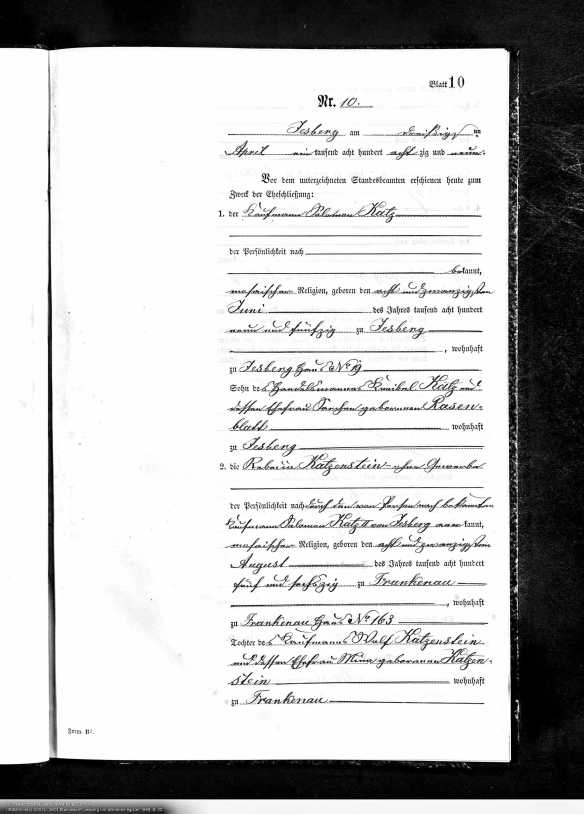 Once again, the relationship between Rebecca Katzenstein and Salomon Schalom Kneibel Katz proved too confusing for my software, but when I used Rebecca’s sister Regina again and compared her to Rebecca’s father-in-law, Schneuer Katz, it showed Regina and Schneuer as second cousins, twice removed, meaning that Regina and thus her sister Rebecca were third cousins, once removed, of Salomon SK Katz.

Regina Katzenstein was the youngest child of Mina and Wolf Katzenstein; she was born on September 24, 1867, in Frankenau.

She married Selig Alexander, the son of Joseph Alexander and Fradchen Frank of Momberg. Selig (sometimes called Seligmann) was born on September 20, 1861, in Momberg. Regina and Selig were married on November 25, 1891, in Frankenau.

As you might have inferred from the names of Regina’s children, her mother Mina had died before the birth of Regina and Selig’s fourth child Mina. Mina Katzenstein died on September 5, 1896, in Frankenau. She was 64 years old.

Mina’s husband Wolf Katzenstein survived her by almost twenty years. He died at age 85 on March 18, 1915, in Frankenau.  Mina and Wolf were survived by their five children and their grandchildren, whose stories will be told in posts to follow.

Now if I ever discover that Mina and her husband Wolf were also cousins, well, then I may just suffocate in those mangrove roots!