As I wrote in my last post, Isadore Goldsmith seemed to begin having legal and medical problems in January, 1893, after allegedly being assaulted in Philadelphia and then trephined in the hospital as part of the treatment for his injuries. He then was arrested for drunkenness but released when the court concluded he was epileptic, not drunk. But his troubles continued, as detailed in my last post: suicide attempts, some bizarre behavior, and more encounters with the police. 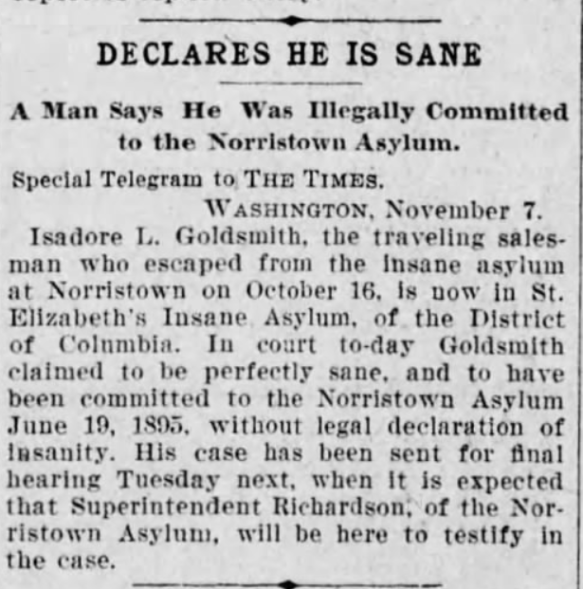 Apparently Isadore had been committed to the Norristown Asylum on June 19, 1895, and had escaped on October 16, 1896, the day before he married Mary in Camden.  (Later articles say he escaped on October 13, but in any event, he and Mary married within days of his escape.)

On November 17, 1896, the court in Washington, DC, determined that Isadore was not insane: 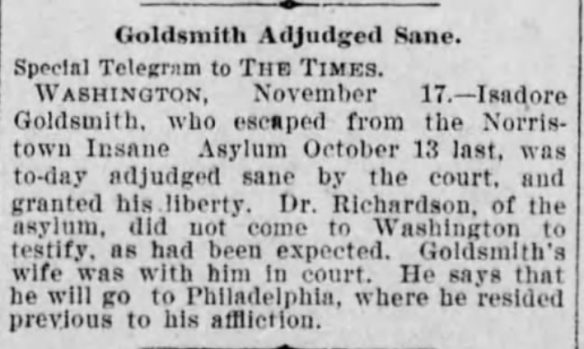 And the very next day, November 18, 1896, Isadore married Mary Wheeler for the second time, this time in DC.  The Philadelphia Inquirer found this second wedding sufficiently newsworthy that they wrote about it on the front page on November 20, 1896:

The somewhat unusual spectacle of a man marrying the same woman twice was witnessed in this city today [Washington, DC]. The two-time bridegroom in the case is Isadore Goldsmith, a young Philadelphian. His story is a romantic one. Goldsmith was an inmate at the Norristown Insane Asylum, from which institution he escaped on October 13. He went quietly to Camden, where he was married to Mary B. Wheeler on the day after his escape. The couple came to this city, where he was arrested as [?].

Goldsmith appealed to the courts for a writ of habeas corpus, claiming that he was perfectly sane and had been unjustly incarcerated. The case came up before Judge Hagner on Tuesday. Goldsmith was the most important witness in his own behalf. He was entirely rational and made a good impression. Some hard questions were put to him, but his answers revealed a clear memory and connected reasoning.

… [A description of his testimony about his January 1893 assault.]

While at a hospital in Philadelphia last summer he was informed by Dr. Hughes, the physician, that a relative wanted him sent to the Norristown Insane Asylum. He was in the Philadelphia Hospital because he had feared one of his attacks was coming on; but he left when he heard of this intention. He was afterwards arrested and incarcerated at Norristown until his escape.

[After medical testimony, the judge determined that Goldsmith was sane and released him.]

To-day Mr. Goldsmith and his wife were re-married by a local clergyman. This second marriage ceremony was performed because Mr. Goldsmith feared that it might be claimed that his first marriage took place while he was legally an insane person.

The newspaper considered his story to be “a romantic one.” But there is no explanation of how he met Mary or anything about her or their relationship. And who was the relative who had had Isadore committed the prior June?

In the 1898 Philadelphia directory there is a listing for Isidore Goldsmith, a repairer. I think this might be my Isadore because on Mary’s death certificate, her occupation is listed as china repairer, so perhaps they were working together.

But in 1899, Isadore made the newspaper again. This time he was accused along with three other men of committing arson, according to this article in the June 25, 1899 Philadelphia Times (p. 16): 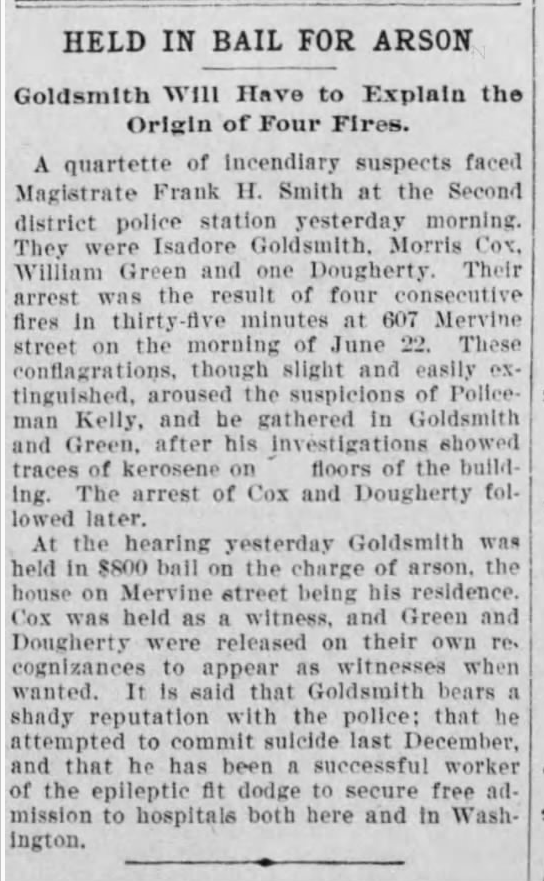 The paper described him this way:

It is said that Goldsmith bears a shady reputation with the police; that he attempted to commit suicide last December, and that he has been a successful worker of the epileptic fit dodge to secure free admission to hospitals both here and in Washington.

Isadore made at least one more attempt to end his life in October, 1906; again he made the front page of The Philadelphia Inquirer:

A pony ridden by James Irwin this afternoon was driven into the surf in pursuit of Isadore Goldsmith, a middle-aged Philadelphian, who was fully clothed and apparently bent on drowning himself. Hundreds on the boardwalk and Young’s Pier where the man had waded into the breakers, wild with excitement, shouted to “save him,” but no one cared to face the heavy sea, and the life guards had retired from duty today.

The pony balked, but spurs urged him into the sea. Reaching Goldsmith, Irwin caught him by the coat collar and was dragging the man ashore, when Goldsmith fought to free himself. During the battle between the two, Irwin, a slim young man, was nearly dragged from the saddle, but he held grimly to Goldsmith with one hand and to the pommel in the saddle with the other. Both were swept time and again by the heavy seas.

Those watching the battle feared that both would be drowned until the pony had backed them into comparatively shallow water, when several men went to the rescue of Irwin and the desperate man he had pulled from certain death. Goldsmith was sent to the police station, and he was found to be in no condition to give an explanation of his conduct.

Cheers greeted Irwin when he brought Goldsmith to the beach, and some rushed to him to shake his hand, hailing him as a hero.

This attempt I find particularly troubling as it endangered another person as well as an innocent animal. 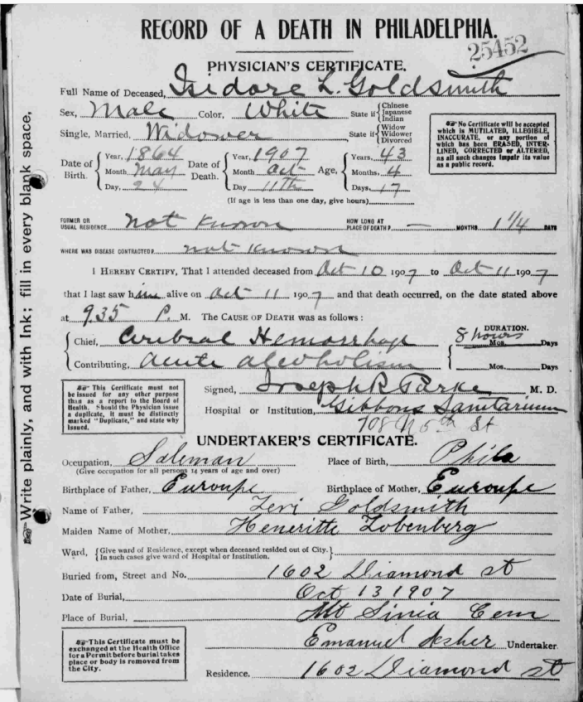 The last news item I found for him was this brief death notice in the Philadelphia Inquirer. I guess his death did not merit the front page despite the fact that the struggles he had endured were often considered front page news.

Was the cerebral hemorrhage related to his injuries from 1893? Was he really an alcoholic or was he an epileptic or both? His several attempts at suicide and his ongoing hospitalizations suggest a man with severe mental health issues.

Isadore was clearly a man with many problems—whether those problems started with the alleged assault in January 1893 or whether they started years before when he was a young man, I don’t know. In the end, it doesn’t really matter. All we can say is that this was a man who had a very troubled life. And his troubles somehow managed again and again to be considered front page news in Philadelphia.

23 thoughts on “Isadore Goldsmith: A Life of Strife and Sadness Revealed in the Newspaper, Part II”