One of the newspaper articles about the disappearance of George B. Metz in 1923 had revealed an important bit of information about the mysterious disappearance of George’s father, Paul Metz, 23 years before. According to statements made by the family quoted in that article, Paul (referred to as Joseph Metz in the news story) had disappeared with his son Elwood around the time that George Metz was born in 1900. According to that same article, no one in the family had heard from either of them since.1

I decided to focus my next search on Elwood. The first name is unusual enough that I thought I had a better chance of finding him than his father Paul Metz/Joseph Raymond. But I also worried that Paul might have changed Elwood’s name to avoid being found.

Fortunately, Paul Metz was not that devious. After much searching, I found an obituary for an Elwood Raymond who died at age 82 on June 26, 1980, in Florida.2 Why did I think this might be the right person? Well, not only did the age match up (my Elwood was born in 1898), this Elwood had come to Florida 65 years earlier from his “native New York City,” meaning he was born in New York, just as my Elwood had been. And Paul Metz had once used the alias Joseph Raymond.

That led me to search for more information about Elwood Raymond in Florida. What I learned was that by 1916, Elwood had attained a degree of fame in Florida—he was reputedly the roller skating champion of the South, according to this article from the Orlando Sentinel of October 20, 1916 (p. 6): 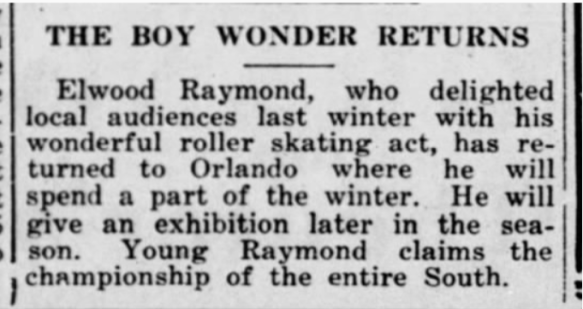 Conrad located this photograph of Elwood as a skater:

Elwood also served as a sergeant in the US Army in World War I and was seriously injured in June, 1918, at the Battle of Chateau Thievry in France, as reported in this article about his bravery and his injury; the article also revealed that Elwood Raymond had a father still living in Ocala, Florida.:

And this article revealed the name of that father:

George Raymond! So Paul Metz had gone from Joseph Raymond to George Raymond! Did he select the name George in some way to connect to the son he had abandoned as an infant, Conrad’s father George? Was it just coincidence that the man who next partnered with Gertrude was also named George—George W. Keller? It all seemed just a bit strange.

On September 1, 1919, the Ocala Evening Star reported that Elwood Raymond was returning home and intending to stay in Ocala:

So Elwood was now the chief of the fire department (not just a skater!). And his father George Raymond was staying with him in Ocala and making it his headquarters while traveling—for work? What kind of work?

On January 26, 1922, the Ocala paper reported on Elwood Raymond’s marriage to Ethelyn Adams: 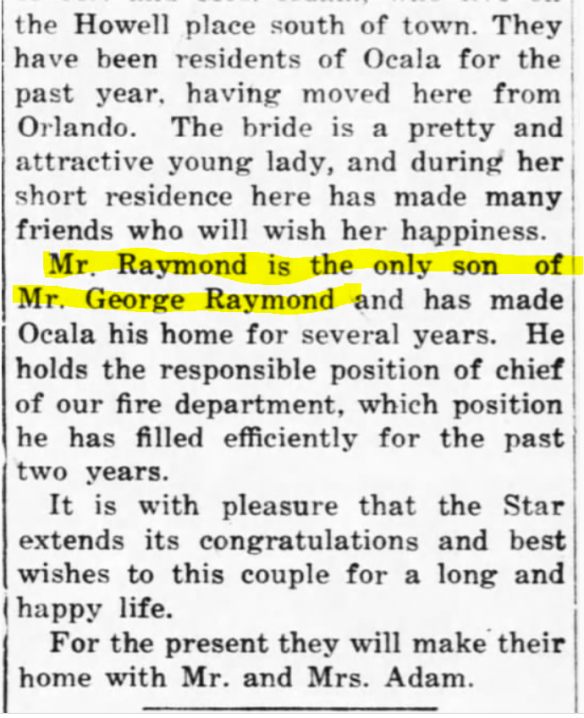 Ethelyn was the daughter of George and Rosa Adam; she was born on January 27, 1904, in Oklahoma, and was living with her parents in Alma, Kansas, in 1910 where her father was a farmer; in 1920, they were living in Kansas City, Missouri, and her father was retired.  According to the wedding announcement, they had moved to Ocala during 1921, having previously lived in Orlando, Florida.3

The wedding announcement is also interesting in that it describes Elwood as “the only son of Mr. George Raymond.” It would thus appear that at least as of 1922, Elwood was unaware of his brother George B. Metz.

There were a number of other articles in the Ocala newspaper about Elwood in his role as fire chief, and then on March 8, 1922 the Ocala Evening Star reported that Elwood had resigned as chief of the fire department. 4 And this news item revealed why—Elwood and Ethelyn were moving to Orlando:

On September 4, 1922, the Ocala Evening Star reported that Ethelyn and Elwood had a new baby, a son.5 Two years later they had a daughter.

In 1930 Elwood, Ethelyn, and their two children were living in Oneco, Florida, where Elwood was employed as a letter carrier for the US Post Office.  Ethelyn’s mother Rosa was also living with them and operating a fruit farm.

So in 1905 George was still a piano tuner and possibly still conning—a graduate of a Boston conservatory? Eight years with Steinway & Sons in New York? I’ve seen no evidence of that, but I suppose it is possible. It looks like George and Elwood had been heading south and eventually ended up in Florida.

Conrad found this 1916 article, which also seems of doubtful truth:

Who is this “uncle” who left George Raymond (or is it Elwood Raymond) a fortune? None of George’s known uncles or Elwood’s known uncles died in 1915; Bernhard Metz died in 1914, however. Was Paul/George somehow trying to claim a share of the estate? Or was this just an excuse to get out of the Clearwater performance?

And this advertisement reveals that George was still tuning pianos in 1920 in Florida:

Aside from the mentions in the news clippings above, I have no other information about Paul Metz/George Raymond’s whereabouts, his job, his life. He was living in Georgia in 1905 and in Florida at least from 1915 until 1922, given the newspaper articles. But before or after? I don’t know. I found no other trace of him as Paul Metz or Joseph Raymond or George Raymond. If he used another name, I have no idea what that might have been. And I have no idea why he had kidnapped his son Elwood and abandoned his wife and newborn son George in 1900. 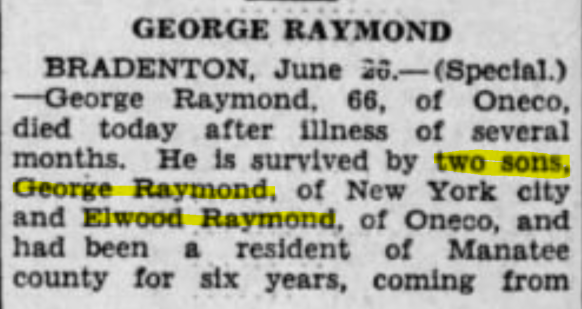 The obituary states that George Raymond had been living in Manatee County, Florida, for six years, and had previously been in Philadelphia. My guess is that the reporter confused the birth place with his prior residence. I found no evidence that Paul/George had returned to Philadelphia in the 1920s.

More importantly, the obituary reveals that by the time Paul Metz/George Raymond died in 1934, he had either revealed to Elwood that he had another son, or Elwood had discovered it on his own. Interestingly, the obituary refers to this son as “George Raymond,” as if he were his father’s namesake. And as if they had an actual relationship.

When I shared all this with Conrad, he revealed to me for the first time that Elwood had contacted George B. Metz sometime after 1934. We don’t know how Elwood learned about his brother George—did his father have a deathbed confession? How did Elwood even find him if he thought his brother’s name was George Raymond? Neither Conrad nor I know the answers, but Conrad shared this photograph of Elwood Raymond and George Metz together, showing that after their father died, the two brothers who had been separated since George Metz’s birth in 1900 had eventually gotten together many years later: 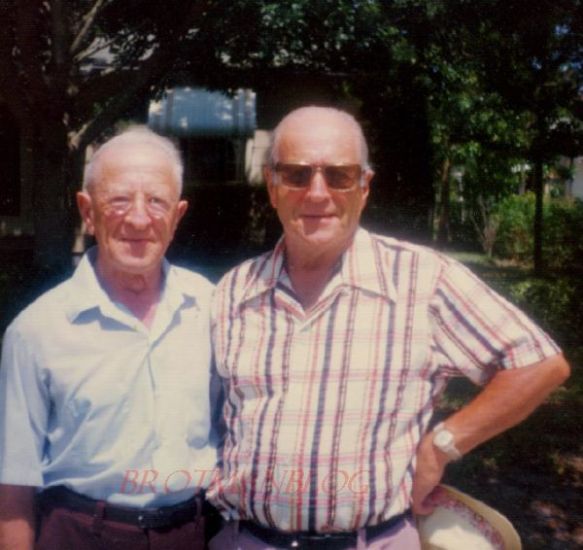 Conrad also learned from a cousin that Paul Metz/George Raymond died in the state hospital in Chattahoochee, Florida, in Gadsden County; this is consistent with the listing in the Florida Death Index. The cousin also told him that George Raymond (Paul Metz) had been in the state hospital for several years for psychiatric treatment and for drug and alcohol abuse. That seems credible, given Paul’s earlier history as an opium user and his long history of lying and stealing.

Thus, together Conrad and I had pieced together the long and twisting path of his grandfather’s life, the man who was born Paul Metz and died as George Raymond. There are still gaps in the story, but at least we know the beginning, a bigger part of the middle, and the end. It was one wild roller coaster ride, and I never could have done it without Conrad’s collaboration.

Conrad recently located and sent me the death certificate for George Raymond, his grandfather born Paul Metz. He also noted several inaccuracies in the certificate. One, it says his father’s name was Bernard Raymond when it was in fact Bernard Metz. Secondly, it says his parents were born in Pennsylvania when they were actually born in Germany. It has his birth year off by two years, 1868 instead of 1866. And it reports that he was a widower when he actually had long ago abandoned his wife Gertrude, who had later remarried. We don’t know who provided this misinformation to the informant, H.S. Howard, but presumably it came from either George himself when admitted to the hospital or from his son Elwood, who also would have obtained that information from his father. Just more fabrications in a long history of such lies by George Raymond/Paul Metz.

43 thoughts on “The Paul Metz Story: The Brick Wall Tumbles Down”