As we saw, between 1910 and 1920, there was a fair amount of growth in the families of Hannah Mansbach Dannenberg and Louis Mansbach, the two children of Sarah Goldschmidt and Abraham Mansbach who were still living in Philadelphia. Hannah’s daughters had married and had children as had Louis’s daughter, and Hannah’s son Arthur Dannenberg had become a doctor. Julius Mansbach and his family were living in Wunstorf, Germany.

The Colorado siblings—Amelia, Bert, and Meyer—were experiencing similar growth in this decade. Amelia and her husband Henry Langer were still living in Denver. Both of their sons registered for the World War I draft, and as you can see, both were in the field of photography, Joseph for the Denver Post and Lester a self-employed commercial photographer.

Joe Langer enlisted and was assigned to the intelligence division, “marching away with his camera under his arm.”1

Lester’s World War I draft registration confused me.  For his nearest relative, it says “Mrs. Amelia Langer wife.” But that was his mother’s name, and on the 1920 census he was listed as single and living at home with his parents and brother Joseph. And I can find no record that he had been married to anyone named Amelia before 1920, nor can I find an Amelia Langer elsewhere in Colorado (except for his mother).

Is it possible someone else filled out the form and Lester only signed it and didn’t see the mistake? The handwriting on the form is similar but somewhat different from the signature—especially if you compare the Es in the signature to those on the line where Lester’s name is written at the top. What do you think? 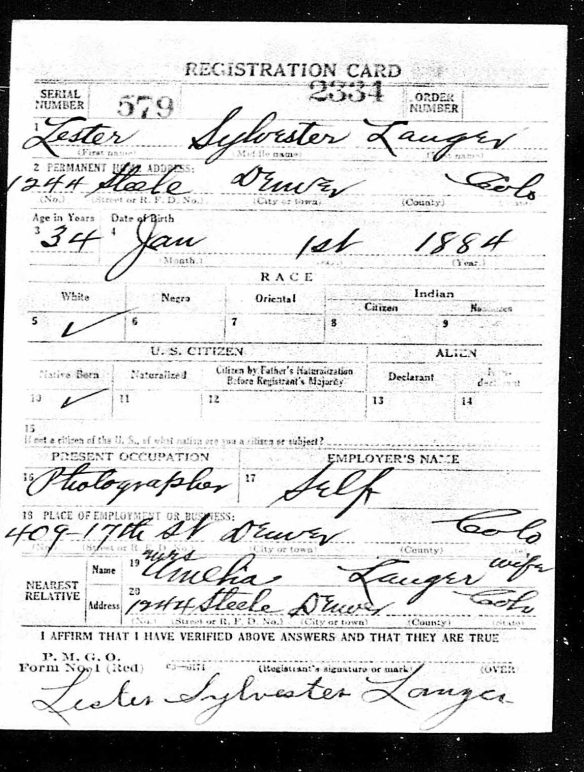 As for Bert and Rosa (Schloss) Mansbach, their daughter Corinne had married Herbert J. Kahn in 1909, as noted in my earlier post, and on July 13, 1912, Corinne gave birth to their daughter Rosalynn.2 In 1920, they were living in Trinidad, Colorado, and Corinne’s younger brother Alvin was also living with them. Herbert was a produce broker, and Alvin was an electrician.3 Alvin had served in the US Army overseas during World War I as a regimental supply sergeant on an ammunition train and had returned safely home in 1919.4

Although Corinne and Alvin were thus in Trinidad in 1920, their parents Bert and Rosa Mansbach had moved to Albuquerque, where Bert is listed in the 1917 directory as a dry goods merchant.5 What would have taken Bert and Rosa away from Trinidad where both their children and their granddaughter were living and where Bert had been in business with his brother Meyer for so many years?

In 1912 both Bert and Meyer were still in Trinidad. They were listed in the Trinidad directory for that year as officers of The Famous Department Store, Bert as president, Meyer as treasurer.

But Meyer also ended up leaving Trinidad; in 1914 he was listed in the Detroit, Michigan city directory as a milliner.6 What had happened?

Well, a search on genealogybank.com revealed the answer. The Famous Department Store had been forced into bankruptcy in the spring of 1914, according to this article from the May 10, 1915 Denver Post (p. 8) describing the sale of the assets of the store to a third party:

According to the first two paragraphs of this article:

One of the largest commercial transactions of the west, and one of supreme importance to the shopping public of Denver has been consummated in the sale of the entire $125,000 stock of the Famous Department Store of Trinidad, the largest and most complete department store in Southern Colorado, to the Golden Eagle of this city.

The Famous Department Store enjoyed the reputation of carrying one of the finest and highest grade stocks in Colorado and was established “many years ago.” Early last spring it was forced into bankruptcy through the general depression caused by the great Southern Colorado coal strike.

This ad, which appeared in the Denver Post on May 23, 1915, also reveals the demise of the Famous Department Store in Trinidad owned by Bert and Meyer Mansbach and its sale to the Golden Eagle:

The strike that caused the failure of the Mansbachs’ store is better known today as the Colorado Coalfields War and the Ludlow Massacre. Much has been written about this tragic chapter in US labor history, and I cannot give it adequate coverage here, but I thought that this summary from the Denver Public Library website provided a good overall description of the background of the strike and its aftermath. Here are some excerpts:

From 1884-1912, Colorado miners died at nearly double the rate of the national average, according the University of Denver’s Coal Field War Project. ….But unsafe work conditions were hardly the only problem Colorado coal miners faced as they headed to work. Thanks to a variety of unfair work practices, miners were paid by the amount of coal they pulled from the mine, not by the number of hours they worked. Even worse, miners were not compensated for the time they spent actually getting down the mine or the time they spent tunneling, laying track and other jobs that they referred to as, “Dead Time.”

By 1900, the United Mine Workers of America was actively organizing Colorado’s coal miners, and in 1913, after a few false starts, they launched a massive strike. … The 1913 strike involved nearly 90% of Colorado’s coal miners and involved an exodus from the mining camps to UMWA-sponsored tent cities that had a devastating effect on the families of the men walking the picket lines.

The strikers’ demands were relatively benign by today’s standards. Their conditions included:

An hourly wage for “dead time” and a 10 percent increase in the price per tonne paid.

The right to shop outside of company stores.

The opportunity to elect their own representatives to operate the scales that weighed their output. (Apparently CF&I’s company men could not be counted on to provide fair and accurate measurements.)

Not surprisingly, the mine owners were not happy about the strike and were more than willing to use brutal force to suppress their rebellious workforce. Rockefeller’s representatives hired private security companies to put down the strike with violent results. .…

Tensions between striking miners and the men hired to put them down came to a head on April 20, 1914, when gunfire shattered the calm of a Sunday morning at a strike encampment at Ludlow. Though there are still disputes as to who started the shooting, there’s no question about who took the brunt of the violence that followed; innocent women and children.

When the gunfire subsided, 25 people were dead, including 11 children. Most of those children died from suffocation when a burning tent collapsed on a makeshift bunker where they’d taken refuge.

News of the murders in Ludlow spread quickly and ignited violence across the coal field as striking miners unleashed their pent-up rage on the coal mines and their absentee owners. The violence continued for 10 more days until Federal troops stepped in to break the warring parties apart.

The Colorado coal strike lasted for another seven months before desperate miners finally went back to work. Though they’d wrangled a few concessions from their bosses, the strike was anything but a victory for the men and women who put everything on the line in hopes of winning fair pay and safe working conditions.

This terrible event, about which I’d known nothing before, had ramifications most tragically for the miners and their families, but it also harmed those in the community who were not directly involved in mining, including Bert and Meyer Mansbach, who lost their business.

It is not surprising that they both left Trinidad for bigger cities where they could start over. Bert and Rosa were living in Albuquerque in 1920, Bert working as a retail dry goods salesman as an employee.7 It must have been hard to work for someone else after all those years owning his own business. In 1920, Meyer and his family were in Detroit where Meyer was a retail merchant in the millinery business; his son Arthur was in business with him.8

It’s sad that after working together and raising their families near each other for all those years that Bert and Meyer were separated by so many miles in 1920. Amelia Mansbach Langer was at that point the only Mansbach sibling still in Colorado where once five of them had been living there : Amelia, Bert, Meyer, Katinka, and Julius.