Every year for as far back as I can remember, my family has gathered for Passover. In my childhood, we had seders at my aunt and uncle’s house with my cousins Jody and Jeff. Then we all started doing a second seder together at our house. Every year, no matter what else was happening, we had seders. They were wild and chaotic and so much fun. Passover was my favorite holiday and was my first introduction to Jewish culture, history, and religion.

Once I married, the tradition shifted, but nevertheless, every year we had seders, one with my family at my parents’ house, one with my husband’s family either in New Jersey or the Bronx or later in Newton. They were all wild and chaotic and a great deal of fun.

Then we had grandchildren, and we began hosting one of the seders at our house, relieving my mother of the burdens of preparing the seder. We love hosting the seder, although the craziness beforehand and during makes me appreciate what all those who had hosted in the past were experiencing. Trying to convert our house to Passover dishes and pots and pans while also cooking some food ahead of time, renting tables and table cloths to accommodate the crowd, and then attempting to participate in the seder while also warming and serving food was a logistical challenge.

But seeing my family gathered together around our table made it all more than worthwhile. 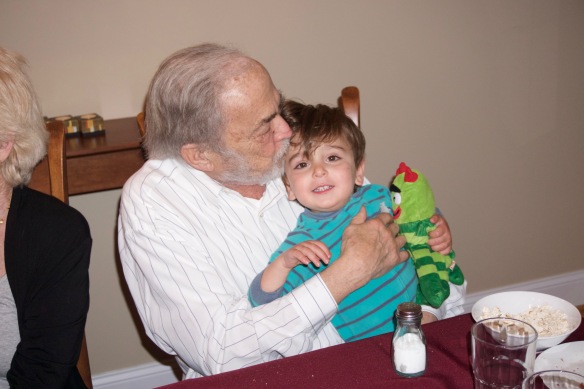 So here we were, facing Passover during the social distancing brought on by the COVID-19 pandemic. How were we going to celebrate without being together? Would this be the first year ever in my memory that I would not be going to a seder? The thought saddened me, as I know it did for Jews all over the world.

Fortunately, my nine-year-old grandson Nate presented us with a challenge and an idea. Could we do a virtual seder using Zoom, the platform his school was using for remote learning? We spent some time learning how to use Zoom and thinking of how we could do this.

We scanned the Haggadah my family has used forever (The Haggadah for the American Family—mostly in English and accessible to all) and figured out who would read which parts. We added back in the handwashing we usually overlook. Nate and Remy practiced the four questions. Then we distributed a PDF of the scanned Haggadah to all who would be attending with their parts designated in the margins. As a final touch, Nate filmed himself doing an introduction and explanation of how things would work, and I emailed it all to everyone along with a Zoom invitation.

Nevertheless, the day of the first seder, I was feeling a bit blue. Sure, I had a lot less work to do, but that made me feel a bit at loose ends. Was it really Passover? I set the table for two with our seder plate filled with the usual ingredients, our cups for Elijah and for Miriam, our matzah holder, and salt water for the parsley.  It looked empty. We even put on nicer clothes than what we’ve been wearing since self-quarantining to make the day feel special. And then we waited for our guests to arrive in the Zoom waiting room.

Our seder table 2020 (before the seder plate was filled)

And they all showed up on time, ready to go. After chatting a bit and saying hello, our grandson Remy, only five, asked if we could have a virtual group hug. Can you imagine how happy that made me? We all reached out our arms to each other. What an amazing insight for a five-year-old—to recognize that we all needed that embrace, even if it was only across the internet. 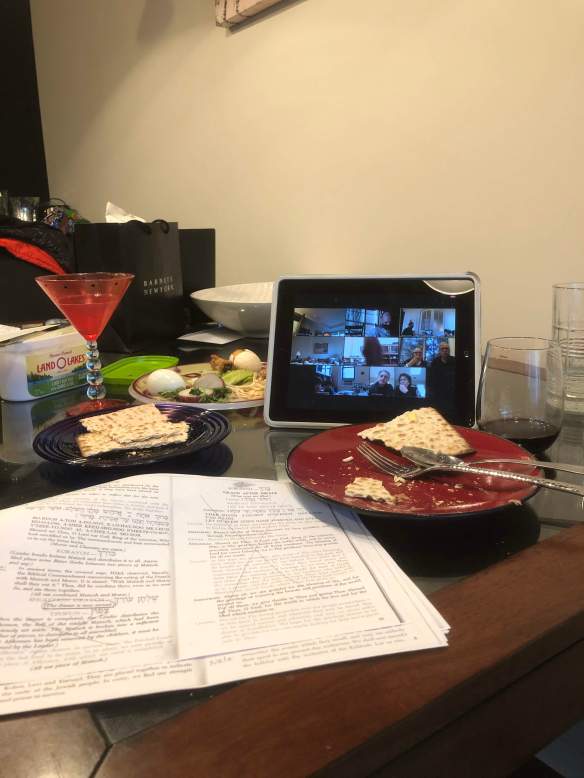 In fact, my younger daughter Maddy went all out and made chicken soup and matzoh balls, something she had never cooked before, and it looked amazing. My older daughter Rebecca made homemade macaroons. Everyone cared enough to do whatever they could to honor our holiday and our traditions. Suddenly it felt like this was really Passover. 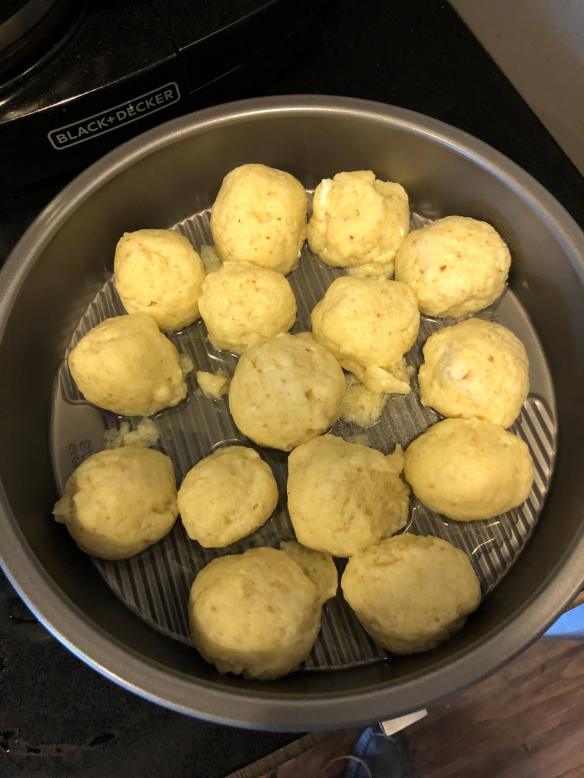 Once we started the seder, it was almost as if we were all in the same room. Nate and my husband shared the responsibilities of being the leader, an honor Nate had certainly earned by virtue of his efforts and creativity in getting the seder organized. We went through our Haggadah as we usually do, adding a few extra comments appropriate to the situation—talking about the need for handwashing, adding an eleventh plague for COVID19, and recognizing the current meaning of the lesson that the wise child is the one who works for the benefit of all humankind, not just for him or herself.

Nate and Remy did a beautiful reading of the four questions, first in English and then in Hebrew. Then I read something our rabbi had written, describing how this Passover is different from all other Passovers and making us all think about our gratitude to those on the front lines of this pandemic—the medical personnel, those working at grocery stores and drug stores, the delivery people, the police and fire and other emergency personnel. Her words also gave us hope that as with our ancestors in ancient times, we would pull through and get out of this contemporary time of captivity.

And then we shared our dinners together, gefilte fish, soup, or whatever we each had prepared for that evening. Nate and Remy searched for the afikomen in their own home, and we sang for Elijah, but didn’t let anyone else inside. We pulled out whatever we had for dessert, and then we said good night.

Of course, it wasn’t the same as being together. Zoom makes it hard to have individual conversations or any real extended conversations that aren’t interrupted by the chatter of everyone else. And there are no hugs and kisses to say hello and goodbye.  But we had celebrated Passover. We had been together. We had remembered our own family traditions as well as the traditions of Jews everywhere around the world and throughout all time. We had had a seder.

Next year we hope we will be together in one space. But maybe this year’s seder will be the one we will always remember best. Because we all cared enough to make it real, to feel the connection to each other, and to appreciate what our traditions have taught us about hope and freedom and gratitude.

54 thoughts on “Passover During A Pandemic”