He was a cattle dealer in Momberg and married to Gidel Katz Loeb, daughter of Isaak Katz and Gelle Katz (the name Loeb must have been adopted after her birth when surnames were required of Jews in Germany). Gidel was born in about 1782 in Neustadt, Germany, and she and Moses married sometime in or before 1811 when their first child Abraham (named for his grandfather) was born.

As you can already see, the repetition of the names creates a lot of confusion—especially for me while researching this family. Moses’ son had the same name as Moses’ father, so I will refer to the son as Abraham II. Moses’ wife Gidel has essentially the same name as Moses’ mother Geidel. I am using the alternative spelling to help keep them separate. And there will be more repeating names as I proceed.

Moses and Gidel had three children for whom there are records. Abraham Blumenfeld II was born on September 11, 1811.1 Isaak was born two years later on December 18, 1813.2 Gelle was born in about 1820.3 All three children were born in Momberg.

Abraham II, like his father Moses, became a cattle dealer and a butcher.4  Like his father and his grandfather, he married a woman named Giedel (also spelled Gidel, Geidel, Geitel, Gitel). His wife was Giedel Strauss, daughter of Hahne Strauss and Dusel Loewenstein. She was born on June 19, 1815, in Amoeneburg, Germany. Abraham II and Geidel were married on February 5, 1840.5 They would have seven children to be discussed in posts to come.

Isaak was also a cattle dealer and butcher like his father and brother.6 He married twice. His first wife was Frommet Kugelmann, daughter of Ezekiel Kugelmann and Knentel Adorn.7 Frommet was born in Wohra, Germany, in about 1821, as her marriage record reports that she was twenty when she married Isaak on August 2, 1841.

Then tragically Frommet died five days later on March 18, 1842. Her death record reports that she was only 19 when she died, which is contrary to the marriage record’s report that she was 20 when she married.

Isaak, left with his infant son Abraham III, married a second time on January 10, 1843. His second wife was Gelle Strauss, the sister of his sister-in-law Giedel Strauss, his brother Abraham II’s wife. Gelle, also a daughter of Hahne Strauss and Dusel Loewenstein, was born November 6, 1819, in Amoeneburg.8 Isaak and Gelle had six children together, to be discussed in a later post.

Gelle Blumenfeld (not to be confused with her sister-in-law Gelle Strauss Blumenfeld) married Simon Rothschild on November 15, 1842, when she was reportedly 20. But her death record indicated that she was 67 when she died in 1887,9 which would mean she was born in 1820 and 22 when she married Simon. There is no birth record available to resolve that conflict.

Simon Rothschild was a 29 year old merchant when he married Gelle. He was born in Waltersbrueck on June 22, 1813, to Seligmann Rothschild and Terz Gutheim.10 Simon and Gelle had nine children together, to be discussed in a later post.

Thus, Moses Blumenfeld and Gidel Katz Loeb had two dozen grandchildren from their three children. Gidel died on December 1, 1843, in Momberg; she was 61. 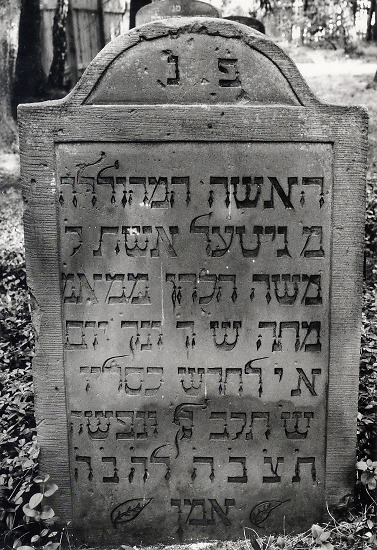 Her headstone inscription is translated as:

the much vaunted woman,

Mrs. Gitel, wife of the Lord

She died on Holy Shabbat, and was buried on

Sunday the 10th of the month of Kislev

be bound in the covenant of life until she is raised at the resurrection of the dead,

Moses Blumenfeld died three years later on November 20, 1846. He was 68. They are both buried in Momberg. They were survived by their three children and twenty-four grandchildren.

Moses’ headstone is translated as:

This is the grave monument

the sincere man, the venerable

ha-Kohen. He died in good

Call on the 2nd Kislev of the year

Two dozen grandchildren for just one of Breine’s siblings! And each of those grandchildren had children and grandchildren. Where do I begin? How do I organize my blog posts so that I don’t lose track of all those descendants?

In my next set of posts I will explore the family of Abraham Blumenfeld II, the oldest child of Moses and Gidel. He had seven children, as stated. Do I tell the story of each of those children separately? And then return to Abraham’s siblings? I guess so. Whew. This could take a while.