When Salomon/Manuel Blumenfeld left Germany for Spain sometime in the 1880s accompanied by his second wife Emma Bendheim and their young son Moritz, what happened to the two children he’d had with his first wife, Caecilie Erlanger? Thekla, born March 18, 1872, and Felix, born May 2, 1873, were just babies when their mother died on December 31, 1873, and young children when their father married Emma in 1876. If Salomon and Emma left for Spain in 1883 or so, Thekla and Felix would only have been eleven and ten years old. Yet there is no record of them living with their father and stepmother and half-brother in Huelva, Spain.

As best I can tell, both children remained in Germany, probably with their mother’s family. Supporting that hypothesis is the fact that when Thekla married Max Gruenbaum on June 15, 1894, they were married in Marburg, the town where Caecilie Erlanger was born and where her parents and brother were still living in the 1880s. Note also that the witnesses were both named Erlanger.

Max Gruenbaum, the son of Hermann Gruenbaum and Betty Nussbaum, was born in Rotenburg an der Fulda on March 12, 1862, making him almost exactly ten years older than Thekla or 32 to her 22.

Thekla and Max had their first child ten months after they married. Caecile Gruenbaum, obviously named for Thekla’s mother, was born on April 26, 1895, in Kassel. 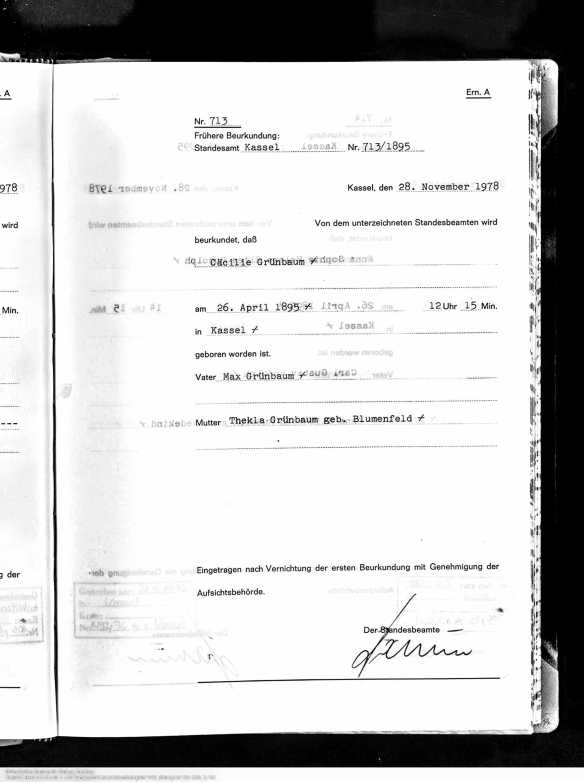 Then came Curt Wilhelm Gruenbaum, born in Kassel on March 23, 1897.

Another son, Franz Moritz Gruenbaum, was born in Weimar, Germany, on April 9, 1899. 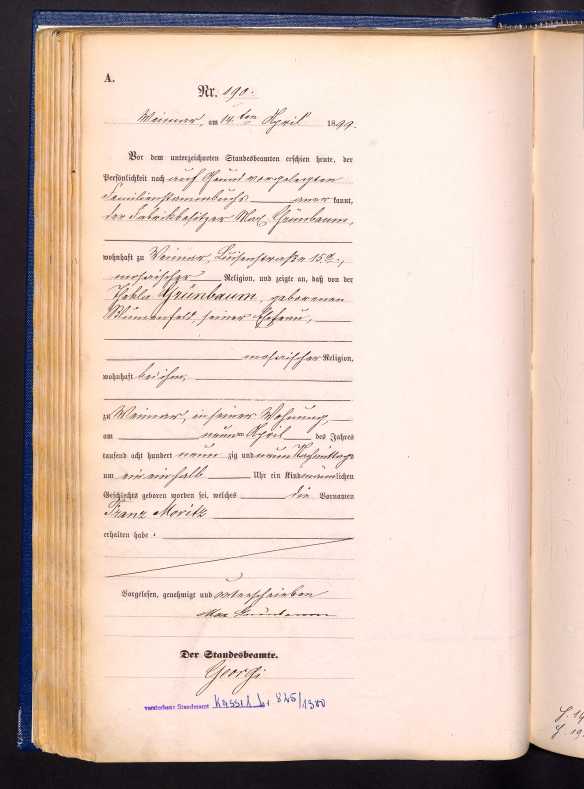 Thus, Salomon Blumenfeld had six grandchildren living in Germany by 1912. Did he know them? Did he ever visit them in Germany? I don’t know.

Unfortunately, both Thekla Blumenfeld Gruenbaum and her brother Felix Blumenfeld lost their spouses at a relatively young age. Felix’s wife Thekla Wertheim Blumenfeld died when she was just 38 on August 20, 1917, in Kassel; her children were just fourteen and eleven at that time.5 And Felix’s sister Thekla lost her husband Max Gruenbaum when he was 61; he died on November 26, 1923, in Kassel,6 leaving behind his wife and their four children, ranging in age from eleven to 28 years old. Thus, both of Salomon’s children with his first wife Caecilie were widowed by 1923.

But there was good news as well. Thekla Blumenfeld Gruenbaum’s daughter Caecilie married Walter Herzog in Kassel on September 27, 1921. Walter was born on July 31, 1887, in Krefeld, Germany, to Moritz and Luise Herzog;7 he was a silk tie manufacturer. Caecilie and Walter had two children. Renata Herzog was born April 4, 1924,8 and her brother Manfred Herzog was born July 15, 1926, in Krefeld.9

Caecilie’s brother Curt Wilhelm Gruenbaum married Gertrude Babette Strauss in Worms, Germany, on March 9, 1930.10 She was the daughter of Leopold Strauss and Johanna Louise Goldschmidt and was born in Worms on May 20, 1901.11 Curt and Gertrude had a son Heinz Gruenbaum born January 29, 1932 in Kassel.12

Felix Blumenfeld’s son Edgar married Anna Hanau on March 27, 1933, in Neunkirchen, Germany. Anna was the daughter of Victor Hanau and Mina May and was born on March 27, 1906 in Schiffweiler, Germany. I found it sweet that Anna married Edgar on her 27th birthday.13

Unfortunately, the next month Hitler became Chancellor of Germany, and life changed dramatically for this family like it did for all Jews in Germany.

15 thoughts on “Salomon Blumenfeld, Part II: The Children He Left Behind in Germany”