As I look over the notes and research and documents I have for the other children of Ernst Nusbaum and Clarissa Arnold, I admit that I am not eager to write about the rest of the family.  The post about their oldest son Arthur and his family really brought me down.  And the post prior to that about Myer Nusbaum’s suicide also was very disturbing.  I ended the last post saying that the lives of the other children were not as sad, but on reviewing them again, I am not so sure about that assessment.  But their lives, whatever the sadness, are not to be forgotten simply because it is hard to write and read about them.  They deserve to be remembered just as much as those who succeeded and lived wonderful, happy lives.

Having said that, for now I am going to skip ahead from the oldest child, Arthur, to the two youngest children, Henrietta and Frank, because I need a break from all the heaviness of Arthur.  Not that either Henrietta’s story or Frank’s story is light and airy, but they are a little bit less depressing.  I will, of course, return to the other three siblings and their stories.  Not that they are all bad, but some are pretty tangled, and I still have work to do before I can post.

Before I turn to Henrietta Nusbaum Newhouse and her brother Frank Nusbaum, however, it’s important to return to Clarissa, Ernst’s widow and their mother.  Clarissa survived the death of her son Myer and the death of her husband Ernst in 1894, the death of her son Arthur in 1909 and her grandson Arthur in 1910, the death of her grandson Sidney in 1923, and the death of her granddaughter Stella in 1929.  She also survived the deaths of two other children, one daughter-in-law, and two other grandchildren, all of whom I will write about in later posts.  In 1910 she was living at 2035 Mt. Vernon Street in Philadelphia, and her daughter Henrietta and son-in-law Frank Newhouse were living with her as they had been since 1890.  Clarissa was eighty years old.  She died nine years later on October 2, 1919, of uremia at 89.  She had had a long life with many sad times, but also many years of happiness, I would hope. 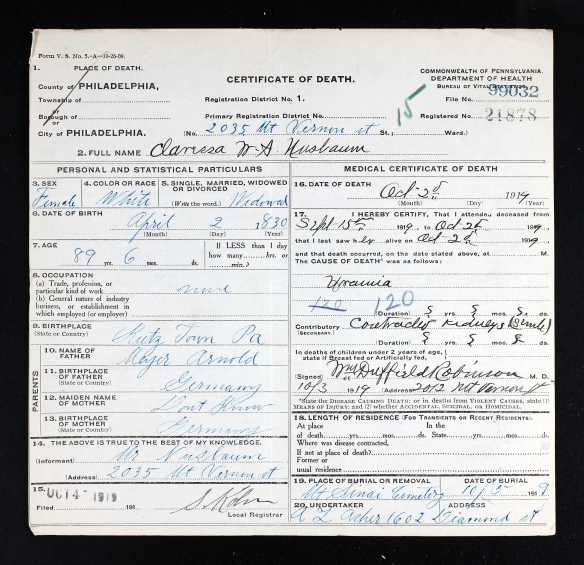 Henrietta and Frank Newhouse continued to live at 2035 Mt. Vernon Street for many years after Clarissa died.  Frank, who had been a traveling salesman in 1900, was selling woolen goods in 1910 and in 1920.  By 1930, Frank and Henrietta had relocated to 3601 Powelton Avenue, and Frank was now doing sales for a “picture house.”  I am not sure whether that refers to a movie theater or a photography studio.  Frank was now 76, and Henrietta was 70.

Frank  Newhouse died five years later on February 23, 1935; he was eighty years old.  Henrietta died five years later on January 4, 1940; she also was eighty when she died.  They are both buried at Mt. Sinai cemetery in Philadelphia.  They never had children, so there are no descendants.  Like her mother Clarissa, Henrietta had endured many losses in her life, but she and her husband Frank had had a long marriage and long lives together.

Henrietta’s brother Frank, the youngest of the siblings, also lived a long life and had a long marriage.  In 1900, he and his wife Dolly Hills were living with their daughter Loraine in Philadelphia, and Frank was working as an insurance salesman.  In 1901, he was listed as a director of the agency in the city directory, and he was residing at 3206 Mantua Avenue.  In 1920, Frank was still in the insurance business, and the family had relocated to 811 63rd Street; Loraine was now 21 years old.  They also had a boarder and a servant living with them.

In 1905, Frank and Dolly Nusbaum were the victims of a burglary at their home; this short excerpt from an article about the burglary gives a sense of their lifestyle and what they lost:

Loraine married Bertrand [Bertram on some documents] L. Weil in 1921. Bertrand was also a Philadelphian, and his father was in the shirt waist manufacturing business.  Bertrand had been working as a shirt waist salesman in 1910, presumably for his father’s business.  Loraine and Bertrand had one son, Burton L. Weil, born on December 7, 1916, in Pennsylvania.  Sometime thereafter, the family relocated to Atlantic City, New Jersey, where they were residing at the time of Bertrand’s draft registration in 1917.  Bertrand was still engaged in the shirt waist industry, now listing his occupation as a manufacturer.  (His father Abe Weil listed himself as retired on the 1920 census, so perhaps Bertrand had taken over the business.)  In 1920, the family was still living in Atlantic City, and Bertrand was still a shirt waist manufacturer. 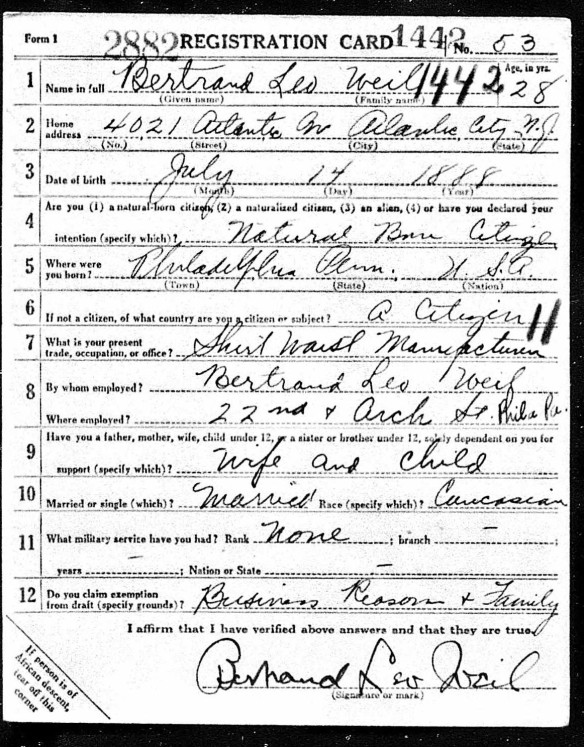 In 1930, Frank and Dolly Nusbaum were living at 4840 Pine Street in the Pine Manor Apartments.  Frank, now 68, was still working as the manager of a life insurance business.

It’s not clear what the status was of their daughter Loraine’s marriage in 1930.  Loraine and her son Burton, now 13, were living back in Philadelphia at 241 South 49th Street.  Although Loraine still gave her marital status as married, she is listed as the head of the household.  Bertrand, meanwhile, is listed in the 1930 census as living in New York City, also giving his status as married.  He was living as a lodger in the Hotel New Yorker on Eighth Avenue and working as a “traveler” in the ready-to-wear business.  Had his shirt waist business failed? Was he simply in New York on business when the census was taken?  I do not know.

But six years later, Bertrand died in New York City. On October 20, 1936, he was found dead in his room at the Hotel McAlpin in New York, and after an autopsy, the cause of death was given as “congestion of viscera; fatty infiltration of liver; contusion of head.”  I am not sure what the first refers to exactly, though I found one source online saying that it was not uncommon at one time in New York to use “congestion of the viscera” as a temporary catch-all on death certificates when the cause of death wasn’t yet clear.

The second page of the certificate has a handwritten entry dated February 22, 1937, four months after his death, that says “acute chronic alcoholism.”

Loraine remarried a year later in 1937.  She married Robert Cooke Clarkson, Jr., a mechanical engineer also born in Philadelphia and a 1915 graduate of the University of Pennsylvania.

Robert had married Anna Armstrong in Philadelphia in 1918, and he was still married and living with her as of the 1930 census.  Since I cannot find a death certificate for Anna, I assume that Robert and Anna divorced, and in 1937, he married Loraine Nusbaum Weil.  Loraine and Robert are listed together on a passenger manifest for a cruise to Bermuda on May 15, 1937, a trip that might very well have been their honeymoon trip. 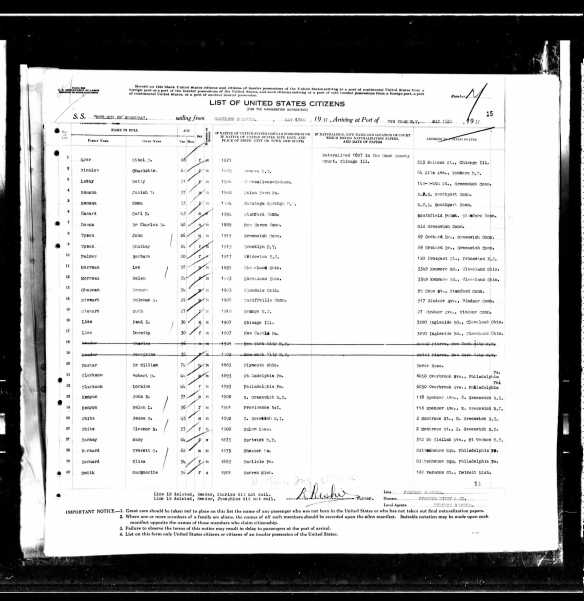 In 1940, Loraine, Robert, her son Burton Weil, and his mother Hannah Weil were all living at 1006 Edmunds Street in Philadelphia.  Robert was working as the mechanical inspector for the Board of Education, and Burton, now 23, was working as a clerk for Campbell Soup Company.  Loraine’s parents, Frank and Dolly Nusbaum, were still living on Pine Street; Frank was retired and 78 years old; Dolly was 76.

The 1940s were a decade of loss for the family.  First, on January 23, 1943, Dolly died at 79 from cachexia or wasting syndrome due to arterial deterioration and senility.  Almost two years later on December 21, 1944, Frank died at age 83 from myocardial deterioration.  They are buried at West Laurel Hill cemetery in Philadelphia. 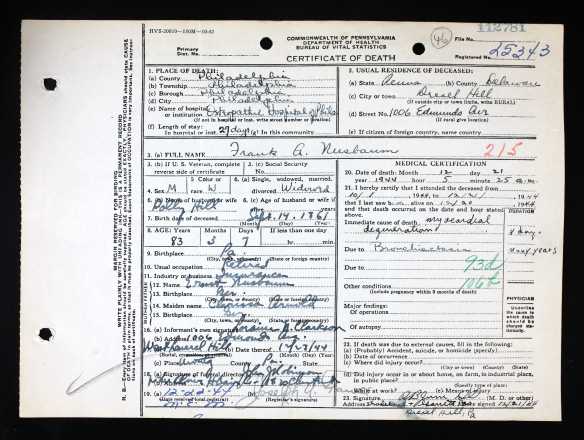 Their grandson Burton Weil had enlisted with the Army Air Corps on October 14, 1940, after two years at the University of Tennessee.  He had fought in World War II as a pilot; he had shot down a German plane before he himself had been shot down over North Africa and captured in Tripoli on January 18, 1943.  He was sent to a German prisoner of war camp and was liberated in May, 1945.  For his service, he was awarded the Distinguished Flying Cross and the Air Medal with three Oak Clusters.

Just a year after his liberation while continuing to serve in the Air Corps in California, on September 20, 1946, he was killed when his plane crashed in Kentucky while he was en route to his home in Philadelphia.

Loraine, who lost her mother, then her father, and then her son in such a quick period of time, lost her husband Robert ten years later on October 9, 1956, when he died of a pulmonary embolism.  He was 64 years old.

Despite all that heartbreak, Loraine lived another 35 years, dying on February 13, 1991, when she was almost 103 years old.  I wish I knew more about what her life was like after 1956, but sadly I cannot find an obituary.  Loraine is buried with her second husband Robert and her son Burton at Drexel Hill Cemetery. 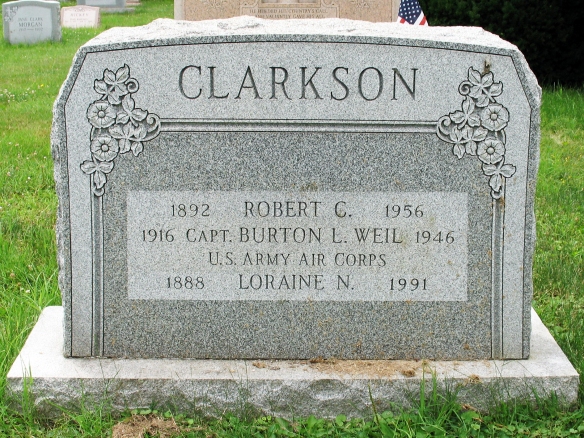 courtesy of Penny at FindAGrave

Neither Henrietta Nusbaum Newhouse nor Frank Nusbaum has any living descendants.