My first genealogical search efforts about a year and half ago related to my grandfather’s family, the Goldschlagers.  I started there because I figured (somewhat incorrectly) that Goldschlager was an uncommon name and thus would be an easier family to research, unlike Cohen, Brotman, Schoenthal, Seligman—my other family lines.  I also was very curious about my grandfather’s life because I had always heard about how he had walked out of Romania.  It also helped that we knew where he had lived in Romania, the city of Iasi (sometimes spelled Jassy, sometimes Yassy) and that we knew the names of his parents and siblings.

I started by focusing on finding other descendants of the Goldschlager clan.  We knew that Isadore had a brother David and a sister Betty.  My brother had already found some of the relevant records from Ellis Island.  We also knew that David had had two sons, Murray and Sidney, and that Betty had had two daughters, Frieda and Estelle. I figured that I would start with Murray and Sidney since I assumed (again incorrectly) that since they were men, their names would be Goldschlager and they would be easy to find.

I was not very experienced in my research techniques back then and did not get very far.  Since the US Census records are only available up through the 1940 census, I could not get too far using ancestry.com at that point.  I was lucky, however, to find Sidney Goldschlager’s obituary by googling his name.  From that obituary, I learned that his brother Murray had changed his last name to Leonard and was living with his wife Edna in Tucson, Arizona.  (Murray and Edna were listed as survivors of Sidney along with his wife Nora; there were no others mentioned, so I assumed (this time correctly) that Sidney and Nora had not had children.)

Once I knew that Murray was using the name Murray Leonard, I searched for him online by googling his name and Tucson and found a news article about the closing of a chain of women’s clothing stores called Vicky Wayne in the Tuscon area owned by Murray and Edna Leonard.  After that, however, I hit a wall.  Although I could find a telephone listing for Murray Leonard, I was not comfortable making a telephone call blindly. At that point I gave up and turned to searching for Frieda and Estelle, but because I had no idea what their married names were, that ended up as a dead end also.  That was, as I said, about a year and half ago.  I figured I had done all I could do to find the Goldschlagers.

Then this past summer I got an email from a man who was also searching for Goldschlagers.  He had seen my family tree on ancestry.com and was interested in sharing information.  Although we were not able to find any connection between our trees, he did inspire me to start looking again.  He gave me the name of a researcher he had found in Iasi, Romania, and I contacted him to look for records for my Goldschlager ancestors.  As I wrote in my prior post about the Goldschlagers, he was able to obtain several records about my grandfather, about my great-grandparents, and about David, my great-uncle.

Those findings were what really lit a fire for me and inspired me to start my research again.  Although I did not get any further with finding Goldschlagers, it was at that point that I turned to the Brotman line and became fully immersed in learning how to do genealogical research.

With the benefit of this new knowledge and the tools I now knew how to use, I returned to researching my Goldschlager relatives.  This time I knew to dig deeper in order to find other descendants. First, I was able to find some records for Betty and her daughters.  I found a census report for Betty Feuerstein living with her husband Isadore, her mother (listed as Gussie Gold), and her two daughters in Bayshore, Long Island. 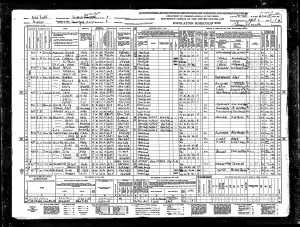 By researching the Feuerstein family, I was able to link with a descendant of that family, who sent me pictures of Frieda and of Betty.  He also knew their married names; Frieda married Abe Adler, and Estelle married I. Kenner, known as Kenny. I found a listing for an Estelle Kenner in Florida, but that’s as far as I have gotten.  My contact did not know whether they had had children or where Frieda had lived.

Last week I returned to the search for David’s descendants. I re-read the article about the Vicky Wayne stores and saw that the stores had been named for a niece of Murray and Edna Leonard.  I googled Vicky Wayne and found many references to a mail order clothing store and then ultimately a reference to the name in an obituary for a woman named Anne Steinberg.  I read the obituary and saw that Anna was survived by two sisters, Faye and Edna.  I thought that perhaps Edna Leonard was Anne’s sister, and so I searched for a record on ancestry that would have listed three sisters on a census named Anne, Edna and Faye.  I found one, the daughters of Ben and Sarah Kaufman living in NYC. 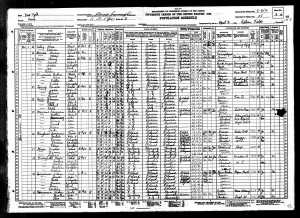 From there I looked at the names of Anne’s children in the obituary and googled them and searched for them on Facebook.  Once I found a few of them on Facebook, I looked to see if they had any friends with the last name Leonard, figuring that Murray and Edna’s children would be cousins of Anna’s children and grandchildren.  Sure enough, Anne’s daughter had a “friend” named Richard Leonard from Tucson, now living in Australia.  I contacted Richard through Facebook and LinkedIn, and within an hour I’d heard back from him, confirming that he is Murray and Edna’s son, David Goldschlager’s grandson, and my second cousin. I had indeed found another Goldschlager descendant.

Richard and I spoke at length by Skype (despite a 13 hour time difference) the other night, and he filled me in on his parents and his grandparents.  His father, though born in Scranton, PA, had grown up in the Bronx and is a loyal Yankee fan (sigh…), as is Richard.  His parents had moved to Tucson in 1958  shortly after marrying in NYC.  Edna’s sister Anna had moved there, and they all worked in the business together, eventually dividing it into two parts, the mail order business and the retail stores.  Sometime in the early 1970s, Murray moved his parents, David and Rebecca Goldschlager, to Tucson as well, where they lived nearby and where Richard was able to see them often.

Richard said that his grandfather did not talk to him about his life in Romania or his family, but was more focused on the present and enjoyed spending time with Richard as he was growing up.  I’ve asked Richard to see if his father, now 92, knows any more about David’s life and family, and he said that he will do so and let me know what he learns.  I also asked Richard if he knew anything about our great-aunt Betty or her daughters Frieda and Estelle, but unfortunately he did not.

Once again, I am amazed by how much you can find in public sources if you are persistent and thorough enough.  I will continue to look for Frieda and Estelle and their descendants, if any.  Now I am expanding the search, looking for other possible relatives of the Goldschlager family.  I believe I have found my great-grandmother’s sister and her family, but that’s a post for another day.