In 1921, The Literary Digest published a profile of Reuben Cohen, Sr., and his career as a pawnbroker.  As I posted previously,  I had a skeptical view of pawnbrokers before I started researching my Cohen ancestors.  Certainly some of that research has been consistent with that view, but overall my opinion of the pawnbroker business has changed dramatically, especially after reading from Wendy Woloson’s In Hock, Pawning in America from Independence through the Great Depression (2006).

There appears to be no reason to doubt the integrity or the character of most of the Cohen men who went into the pawnbroker business in Philadelphia, starting with my great-great-grandfather Jacob and carried on by his sons, sons-in-law, and grandsons.

The profile of Reuben Cohen, Jacob’s son, my great-grandfather’s brother, provides a fitting end to my telling of the story of Reuben and Sallie and their seventeen children.  It appeared in the Literary Digest for April 23, 1921, pages 48, 50, just five years before Reuben died.  Most of the article consists of direct quotes from Reuben himself, making it a valuable piece of family history for me and for all my Cohen cousins and relatives.

Reuben is portrayed as an honest, good, man, an articulate and thoughtful man, a man who believed that his work was not only about making money for himself and his family, but also about helping people who needed money and were not able to get that money from a traditional bank.  I am quoting the article in full because I hope that it helps to preserve the legacy of Reuben Cohen and also to provide a more positive view of the role of the pawnbroker.

PEOPLE AND PLEDGES THAT COME TO A PAWNBROKER

COFFINS, false teeth, wooden legs, anvils, anchors, horses, and auto mobiles—that sounds like an extract from the catalog of a museum of contemporary times, but, really, it is a partial list of odds and ends taken in by a Philadelphia pawnbroker. For ﬁfty years, we are told, Reuben Cohen has performed the office of “uncle” to an innumerable army of more or less distant relatives whose ways of living, or misfortunes, led them to establish a connection with him. Once, he avers, it was an undertaker, to whom the continued good health of the community had meant serious ﬁnancial loss. The undertaker had become overstocked with cofﬁns, and needed hard cash for the butcher and groceryman he had failed to bury. At another time it was a horse dealer, who needed ready money more than a mount. At another time, still, it was a man who found that he could get along temporarily without his underpinning provided he could get something under his belt. False teeth form a ready article of sale and are more easily disposed of than anchors. But even an anchor may ﬁnd a temporary resting-place in the back room of a pawnshop.

During his half century under the sign of the three balls Mr. Cohen evidently turned few away from his door. And he found that it isn’t only the poor who seek to be tided over an unlucky ﬁnancial venture, or to raise money for an unexpected need. Sometimes people who are reputed rich ring the bell after nightfall, and come in lugging the family silver or a bagful of ancient heirlooms. Reuben Cohen has been “uncle” to them all, and he has had a rare opportunity to study all phases of human nature. Said he recently to a reporter for the Philadelphia Public Ledger:

“A woman who had all the appearance of class came into my place one day and pawned a ﬁne silver set. It was after I had been in business long enough to have saved enough money to take a real vacation.

“My wife and I went down to the old Hotel Stockton, at Cape May, three days later. And whom should I see, as I walked into the lobby, but that woman who had pawned the silverware. She was drest in the height of fashion. No, she didn’t recognize me then, and she never recognized me many other times when I saw her there. But I recognized her. Incidentally, she never redeemed her silverware.

“Now you don’t want to get the idea that everyone who comes to a pawn broker’s shop is a waster, a spender, improvident, you know, and all that. Maybe some of those with that richness bluff are that way, but the majority of the people who come to me are poor.

“I think a reputable pawnbroker can be described as the poor man’s banker. Poor people can not get loans from banks. Still there are lots of times when a poor family that has only so much income coming in each week has to have what is to them a large sum at one time. They go to a pawnbroker then, and there’s no reason why they shouldn’t.

“That was the case with the last fellow who pledged an automobile with me. He had to meet a note on a Camden bank, and he begged me to take the automobile as a pledge. I got stung on that deal, too. I had to sell that automobile later for a good deal less than I lent that man.

“I can tell the value of most things pretty well, but I don’t think I’ll take a chance on another automobile. I might still take a horse, but no more of them are being offered. I took quite a few in my day.”

Mr. Cohen gave a reminiscent chuckle as he told about the time an undertaker had pledged several cofﬁns and some coffin trimmings:

“My assistant was out when the cofﬁns came in,” he said. “The cofﬁns were stood up at the back of the store. When I heard my assistant coming in, I ran back and stood up in one of the coffins. When he saw me there, he gave a frightened jump and might have run out of the place if I hadn’t stept out and laughed. That undertaker’s business must have picked up, for he redeemed the cofﬁns and the trimmings, and you can be sure I was thankful for that.

“Talking about business ups and downs, I had a funny experience one night ’way back. In those days Saturday nights were our busiest times. One Saturday night when old Maxwell Stevenson was running for Congress in this district he made a speech on the corner right across from my place.

“He talked for hours—in fact, until I closed in disgust. He must have been a wonderful speaker, for not a single customer entered my shop while that other attraction was running across the way.

The veteran money-lender became curious when he was led into a discourse on the ethics of the business.  He said that he knew that the popular picture of the man in the establishment that advertised itself with the three golden balls was that of a merciless gouger.  That there were some of that type he did not doubt.

“But I know there are others.  Since you are asking me about my experience, I will tell you that the time with the automobile was not the only time I have been stung.  I took that machine at a value that I knew was higher than its true one because the fellow needed a certain amount of money to meet his note.  And the bank wasn’t going to wait for its money.

“The fellow promised, of course, to redeem the automobile, but I never said more than once, and, altho after each time I made up my mind to be more cautious, I’d make the same mistake, because I couldn’t resist the appeal some smooth tongued rascals could make. And, mind you, I don‘t pose as being unique in my business. I take great pride in the small success I have been able to make because I have always tried to get the conﬁdence of my customers, and I am sure that is the reason for my success.”

Mr. Cohen is large, broad-shouldered and for all his sixty-seven years, presents a ruddy, healthy, well-preserved picture of a man who might well be taken for a prosperous insurance broker, the business of one of his sons. He has a cheerful appearance and a bluff, hearty manner.

He has never moved out of the neighborhood in which he grew up. He lives in a little house next door to his place of business. Despite his laughing good nature, he contest that he has had his share of sorrows. Of the eighteen children born to him and his wife only seven are living, four sons and three daughters.

There are two things of which he boasts. One is that his son, Simon L. Bloch Cohen, was a member of the First Division, and gassed, shell-shocked, and twice wounded, and was decorated with the Croix do Guerra by Marshal Foch. The other is that his lifelong friend, Warden Robert McKenty, of the Eastern Penitentiary, named one of his sons Reuben Cohen McKenty.

In Reuben’s memory and in memory of his son Simon of whom he was so proud, I will end this small chapter of my family history with a photograph of Simon’s Croix de Guerre and with the famous symbol of the pawnbroker, the three gold balls. 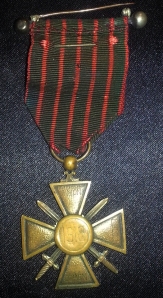 7 thoughts on “A Man of Character and Integrity: A Profile of Reuben Cohen, The Pawnbroker”