The 1870s were a pretty tough decade for my Nusbaum relatives.  There were business and financial troubles as well as numerous deaths of children and others.  So I admit that it is not with great enthusiasm that I return to the 1870s, but at least this is the last branch of the family to cover during that decade.  I’ve covered my three-times great-grandparents, John Nusbaum and Jeannette Dreyfuss, and their children, as well as the families of  Jeanette’s two sisters, Mathilde and Caroline, and also those of John’s sister Mathilde and the surviving families of John’s brothers Maxwell and Leopold.  That leaves only the 1870s story of John’s brother Ernst and his wife Clarissa and their children.

Ernst was the closest sibling in age to John, just two years younger, and he was apparently the only sibling who settled in Philadelphia perhaps as early as 1851  and stayed there for the rest of his life.  He had married Clarissa Arnold, a Pennsylvania native born in 1830 who was fourteen years younger than Ernst.  Ernst and Clarissa seemed to have been quite comfortable in the 1850s and 1860s.  By 1861, they had six children.  Ernst was in the men’s clothing business in a firm called Arnold, Nusbaum, and Nirdlinger.  (I assume the Arnold was one of his wife’s relatives.) By 1870, Ernst and Clarissa’s children were almost all teenagers or almost teenagers: Arthur was 19, Myer 18, Fannie 14, Edgar 12, Henrietta 10, and Frank was nine years old.  They were still living at 625 North 6th Street, the same home they had been in since at least 1861.  They also still had two servants living with them.

But in 1870, Ernst’s firm went bankrupt, as seen in this December 5, 1870, article from the Philadelphia Inquirer:

Three years later Ernst is listed in the notions business at 518 Arch Street in the 1873 directory.  Interestingly, his son Arthur and his wife Clarissa seem to have had a ladies’ furnishings business at the same address called Clares & Arthurs.  Arthur was still living at home, and the family had moved to 1000 North 6th Street by 1873.   Was this a move necessitated by the economic downturn?  Did Clarissa want to start working out of the house because they needed more money or was it just that her youngest child was twelve years old and the others well into their teens or twenties so she had the time and interest in doing so?

I do not know, but the following year, it appears that Clares & Arthurs no longer existed.  Ernst is listed without a business address, Clarissa has no listing, and Arthur is listed as a clerk. The next year, 1875, has Ernst living at 2103 Green Street without any occupation listed and Arthur listed as residing at the same address and working as a salesman at 730 Chestnut Street.  His younger brother Myer is also listed at the 2103 Green Street residential address.  In 1876, Myer is listed as working as a bookkeeper, but Arthur and Ernst simply have the residential address.  Same in 1877 and 1878 for Ernst and Myer, but Arthur is not listed at all. So had Ernst retired?  Or had he simply stopped working due to the recession? And where was Arthur?

Well, in 1879, when the recession was starting to end, Ernst is once again listed with an occupation—in the cloaks business.  Myer is still listed as a bookkeeper, and now Edgar, his younger brother, is listed as a salesman.  All three are still listed as residing at 2103 Green Street in the 1879 Philadelphia directory.

And where was Arthur?  I cannot find him in the directory listings for 1877 through 1879.  He had married Henrietta Hilbronner in 1876, and they had had a daughter Florence born in 1877 and a son Sydney born in 1879.  According to the 1880 census, they were all living with Henrietta’s parents on North Seventh Street.  Henrietta’s father Morris was a clothing merchant with his own business, and Arthur was working as a clothing cutter, presumably for his father-in-law.

The other children of Ernst and Clarissa were also getting married in the late 1870s.  Fannie Nusbaum married Jacob L. Hano on February 28, 1877, and they also had two children born by 1880: Louis F. Hano, born in Youngstown, Ohio, on November 30, 1877, and Ernst Nusbaum Hano, born May 16, 1880, also in Youngstown, Ohio.  Jacob Hano was born in Philadelphia in 1850 and had lived his whole life there.  In 1874 he’d been working as a salesman in Philadelphia, residing at 2026 Green Street, right across the street from Fannie and her family.  He had attended Crittenden’s Philadelphia Commercial College.  Perhaps he moved Fannie to Youngstown after they married because he believed that there were better business opportunities there.  Unfortunately, however, like others in the family and the country, he faced financial problems and declared bankruptcy in May, 1878.

He and the family remained in Youngstown, however, and he is listed on the 1880 census living there with Fannie, their two young sons, and his brother Benjamin as well as a servant.  He listed his occupation as a clothier, and his brother was working as a clerk in a department store. Thus, Jacob must have rebounded from his bankruptcy and started a new business.  They did not remain long in Youngstown, however, as we shall see. Myer Nusbaum, Ernst and Clarissa’s third child, also married and had two children in the 1870s.  He married Rosalie Aub, and their first child Corinne was born on May 19, 1878.  Her brother Jacob was born the next year on June 24, 1879.  As noted above, Myer was working as a bookkeeper throughout the 1870s and was still employed as a bookkeeper in 1880 according to the census of that year.

Although the 1900 census indicates that Edgar Nusbaum married Viola Baritt in 1879 when he was 21 and she was eighteen, on the 1880 census he is still listed as living at home with his parents at 2105 Green Street and single.  My guess is that they did not marry until 1880, and their first  and only child Selina was born a year later on November 16, 1881.   As noted above, Edgar was listed as a salesman in the 1879 directory, and the same occupation is given in the 1880 Philadelphia directory, although the 1880 US census lists his occupation as a clerk.

Ernst and Clarissa’s youngest two children, Henrietta and Frank, were also still at home in 1880 at 2103 Green Street, depicted below.  Henrietta was 20 and Frank 19.  Frank was working as a clerk like his brother Edgar.  Their father Ernst listed his occupation as a manufacturer.  So perhaps the slowdown of the 1870s had eased, and Ernst and his sons were all then once again gainfully employed. 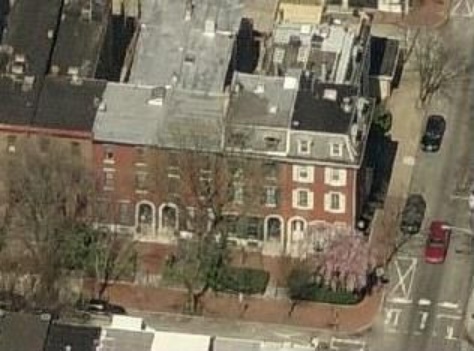 And now we can move on to the next decade. The 1880s may not have presented the same economic challenges as the 1870s, but as we will see, it presented other challenges and other changes for the extended Nusbaum family.

3 thoughts on “One More Chapter in the 1870s: Ernst Nusbaum and Family”