The last two posts and the research surrounding them have really been draining.  The sad stories of Minnie Simon and Daniel Meyers in particular were hard to read about and to write about.  And sadly the next decade for the descendants of Caroline Dreyfuss and Moses Wiler is no more uplifting.  In fact, in some ways it’s even worse than the first decade of the 20th century.  But rather than put it off, I want to get it done. Today I will post about the children of Eliza Wiler and Moses Simon; next I will post about the children of Fanny Wiler and Joseph Levy and the children of Clara Wiler and Daniel Meyers. Then maybe I can post some cartoons or funny pictures or pictures of kittens.  Anything but death, disease, and despair.

The four surviving children of Eliza Wiler and Leman Simon continued to have far more than their fair share of tragedy in the 1910s.  First, on April 20, 1915, the youngest child Leon died from tuberculosis.  He had been at the Mont Alto Sanitarium in Quincy, Pennsylvania for over a year.  He was only 36 years old.  Having just watched the PBS program about tuberculosis, “The Forgotten Plague,” on February 10, I have a whole new appreciation for the suffering this disease caused.  People could live for years with the disease, coughing, wasting away, and being sent to live in a sanitarium surrounded by others also suffering from these symptoms.  I now better understand how many people were affected by TB and how lucky we all are that medical science eventually figured out not only how to treat it, but also how to prevent it. 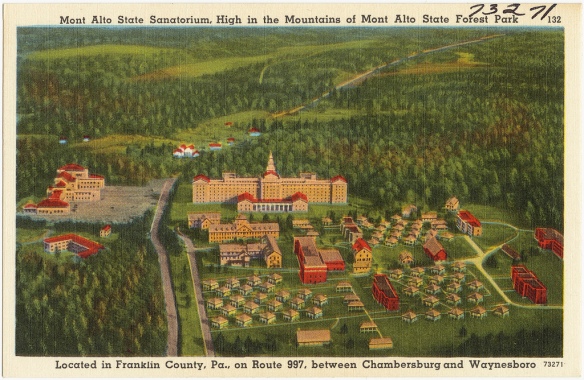 There are a number of strange things about Leon’s death certificate.  First, notice that it says Leon was widowed.  I have no record that he ever married, and since as I pointed out in my last post, I can’t find Leon on the 1910 census, I don’t know whether he married before or after the 1910 census.  In addition, if he was widowed, it means his wife also died very young. 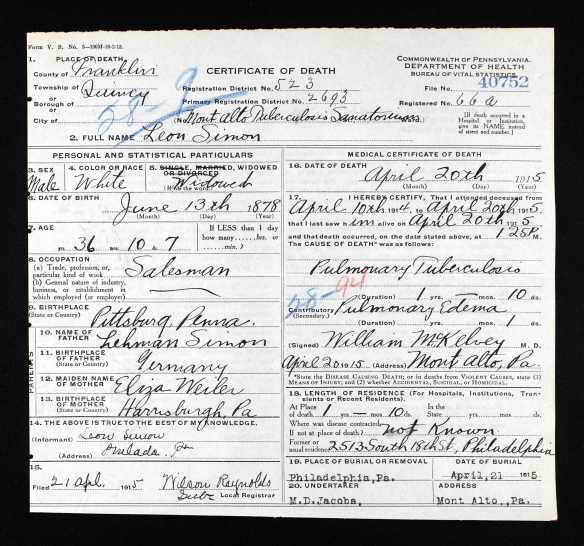 The second strange thing is the name of the informant: Leon Simon.  Certainly Leon could not have signed his own death certificate.  I checked to see if there was another Leon Simon in the extended family who might have signed, and there was Leon (Dinkelspiel) Simon, the son of Moses Simon and Paulina Dinkelspiel, who was after all Leon (Wiler) Simon’s first cousin.  But that Leon was fifteen years older and lived in Baltimore.  I found it strange that he would be signing the death certificate when Leon the deceased had so many closer relatives living right in Philadelphia.

Then I looked more closely and realized that the handwriting on the signature of the informant matched the handwriting of the local registrar, Wilson Reynolds.  The rest of the handwriting on the certificate matches that of the doctor, William McKelvey, who provided the cause of death.  I am not sure what to make of this except that perhaps Leon had provided all the information about his family to the sanitarium at some earlier point and that the doctor had then filled it out and the registrar just “rubber stamped” it by signing both Leon’s name and his own.

The final interesting piece of information on this certificate is the address provided as Leon’s last address before entering the sanitarium: 2513 South 18th Street.  You may remember that I also had trouble locating Leon’s brother Joseph on the 1910 census because there were so many men with that name in Philadelphia.   Using this address I found Joseph L. Simon living at that same address both on the 1910 and in the 1920 census reports as well as in the 1918 Philadelphia directory.  It is also the address that Joseph gave on the funeral bill for his brother Leon’s funeral in 1915.

On the two census reports, Joseph was married and living with his wife, Mary, who was nineteen years younger than he was.  The 1910 census reports that Joseph and Mary had been married for eight years, meaning they married in 1902. I’ve yet to find a marriage certificate.  Joseph was working as an accountant for a trust company (Providence Life & Trust Co, according to the funeral bill). 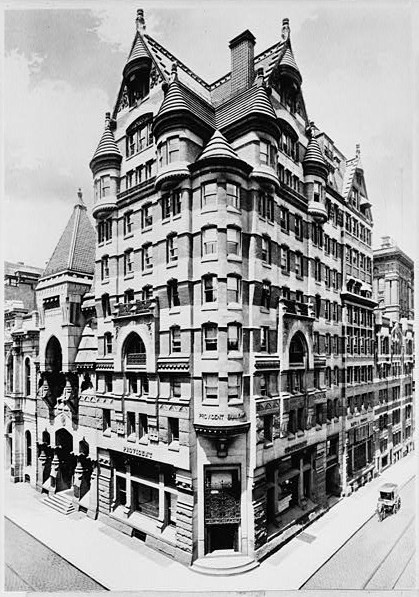 The 1920 census did not help matters though.  On that census, Joseph’s parents are both listed as born in Virginia.  Very strange.  Could Mary have thought he was a Virginian like she was?  If he married her in 1902 as indicated on the 1910 census, Leman Simon was still alive.  I can’t imagine that a German immigrant sounded like a Virginian even after being in Pennsylvania for almost fifty years. Nevertheless, because they were still living at 2513 South 18th Street, I still believe that this is the right Joseph and Mary Simon.

And then Joseph and Mary disappear.  There are many, many Joseph and Mary Simons listed in directories in many, many places during this time period, yet the 1930 census does not have one  couple that fits my Joseph Simon even as closely as the 1910 and 1920 census reports.  This was the closest fit I could find for Joseph.

On this census the birth places of Joseph’s parents are correct: Germany and Pennsylvania.  The age is correct.  But the middle initial looks more like an H than an L.  There is no occupation, so that is no help.  Joseph’s marital status is given as single, and he is living at a lodger at what seems to be a very large boarding house.  I think this is Joseph.  If so, what happened to Mary?  Did she die? Did she leave him? I don’t know.  The trail has run dry.  It also ran dry on Joseph.  I cannot find him on the 1940 census nor have I found a record of his death.  He remains an elusive subject.

As for Flora Simon, she had been widowed back in 1901 when Nathan Strouse died, and she had remarried in 1903.  But that marriage did not last.  Although Flora was living with her second husband Albert Heulings in 1910, by 1917 he was married to another woman, Evelyn Cotton, according to both the Cook County, Illinois Marriage Index and his draft registration for World War I.

On the 1920 census, Flora was listed as divorced and living with her son Lester, now 31 years old.  Flora was working as the “keeper of an apartment house,” and Lester was in the advertising business.  There were also three lodgers plus Flora’s sister Nellie. Why was Nellie living with her sister? What had happened to her husband Louis? That’s when I looked and found the death certificate for Florrie Loux, a child I had not known about until I saw the 1920 census and looked for where Louis Loux might have been.

And that’s where the story really turns tragic.

I mentioned in my last post that I couldn’t find Nellie and Louis on the 1910 census and would not have known about their daughter if I had not found her death certificate. 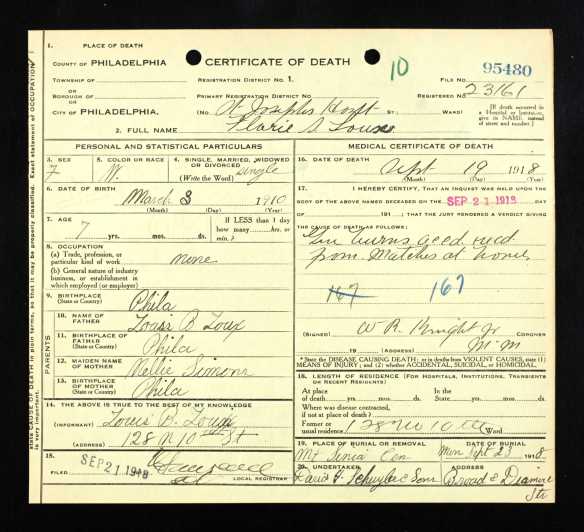 Florrie had died on September 21, 1918 from burns accidentally caused by matches.  A seven year old child.  There is nothing I can say to describe the horror I felt when I saw that death certificate.

From his World War I draft registration, I know that in 1917 Louis had been working in Philadelphia doing advertising sales for the German Daily Gazette.  The home address he had provided for his 1917 draft registration, however,  was 311 Linden Street, Haddonfield, New Jersey.  The death notice for Louis indicated that that was his parents’ residential address in 1918.  But Florrie’s death certificate indicated that she and Louis both had been living at 128 North 10th Street in Philadelphia when she died.  I was able to obtain the information contained in the death certificate for Louis (I am still waiting the actual document), and it reports that he was divorced at the time of his death.  I cannot tell from these records whether Louis and Nellie had divorced before or after the death of their daughter.

UPDATE:  Here is the death certificate for Louis Loux. 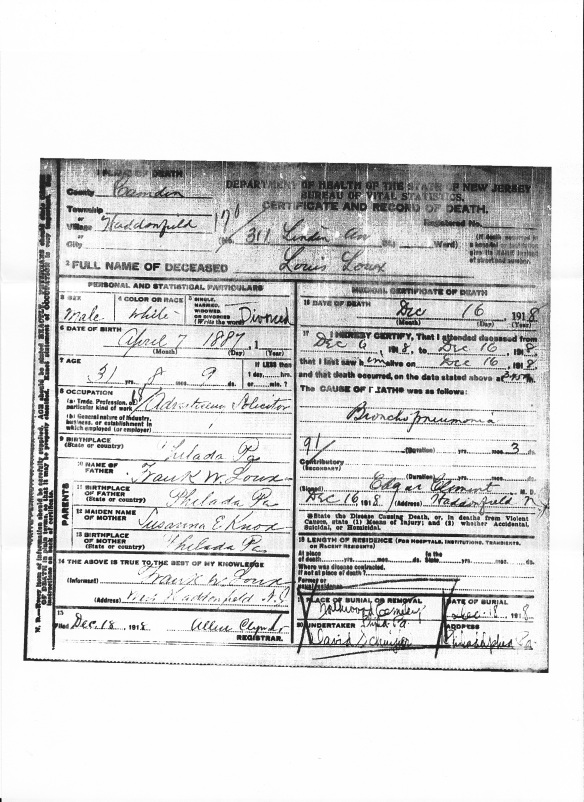 Think about it: between 1910 and 1920, Leon Simon had died from tuberculosis; Flora Simon, already widowed once, saw another marriage end; Joseph Simon was married, but sometime after 1920, his marriage seems also to have ended either by death or divorce; and Nellie Simon lost both her young daughter and her ex-husband in the space of a few months in 1918.  All this followed a decade where Leon, Flora, Joseph and Nellie had lost both of their parents and their sister Minnie.

Now you can see why I need something to lift my spirits.  Fortunately, as I will cover in my next post,  things were not as bad for the children of Fanny Wiler Levy or the children of Clara Wiler Meyers.  Not as bad.