Handmade shmura matzo used at the Passover Seder especially for the mitzvot of eating matzo and afikoman. (Photo credit: Wikipedia)

A year ago I was feeling disconnected from Passover until I heard my grandson tell us the story of Passover in a way that made it feel new and exciting and different all over again.  This year his little brother will experience his first seder, though at only ten months, that experience will likely be short and quite unfocused.  Just a lot of really noisy people sitting around a table eating food that he neither can nor would want to eat.  But it’s a new reminder that every generation and every child experiences Passover as a new experience, allowing all of us who are jaded and detached to be able to relive our own early experiences with this special holiday.

Last year I entered into Passover thinking about my mother’s ancestors, the Brotmans, the Goldschlagers, and the Rosenzweigs.  I focused on their exodus from the oppression and poverty and anti-Semitism of Galicia and Romania and their courage and the desire for freedom that led them to leave all they knew to cross the continent and then the ocean and come to New York City, where they again lived in poverty but with greater hopes for a life of freedom and economic opportunity.  And they attained their goals if not in that first generation, certainly by the third and fourth generations. For the last year now, I have been researching, studying and writing about my father’s paternal relatives.  It has taken just about a full year to cover the Cohens, the Jacobs (with whom I actually need to do more work), the Seligmans, the Schoenfelds, the Nusbaums, and the Dreyfusses.  Soon I will start my father’s maternal relatives—the Schoenthals and Katzensteins and whatever other surnames pop up along the way.  Researching my father’s families has been so different from my mother’s, and I can go so much further back.  I can’t get back much before 1840 with my mother’s family and have absolutely no records before 1885 or so for any of them.  Although I have a number of Romanian records for my Rosenzweig and Goldschlager relatives, I have no records at all from Europe for my great-grandparents Joseph and Bessie Brotman, despite hours and hours of searching and even DNA testing.

In contrast, my father’s ancestors have provided me with a rich opportunity to learn about Jews in Amsterdam, London, and especially the towns of Gau-Algesheim, Erbes-Budesheim, Bingen, and Schopfloch, Germany.  I have been able to find records all the way back to 1800 or so for almost every line.  I’ve had amazing help along the way on both sides of the Atlantic, and I’ve even learned a little German to boot.  My father’s families were pawnbrokers and peddlers and clothing merchants; they were pioneers and politicians and war heroes. 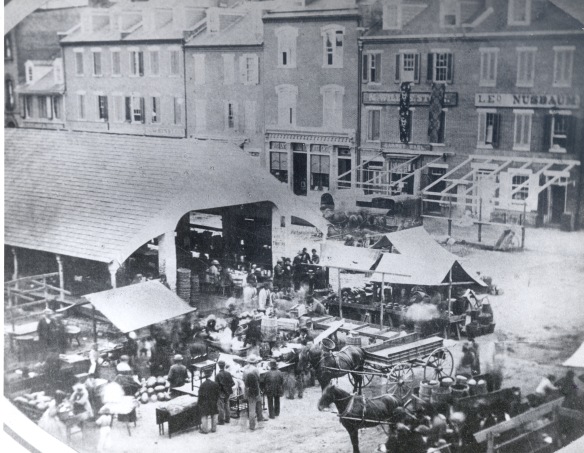 They came to the United States in the 1840s and 1850s, and most of them suffered terrible heartbreaks, economic struggles, and early deaths.  Most of them settled in Philadelphia and other parts of Pennsylvania and New Jersey, but there were those who went to places that I’d never think a Jewish immigrant would go: Iowa, Texas, Illinois, Michigan, California, and, of course, New Mexico.  Many married outside the Jewish community and assimilated into American culture far more so than my mother’s relatives.  Ultimately, the Cohens/Jacobs and Seligmans/Schoenfelds and Nusbaums/Dreyfusses were successful; they found the American dream, and they embraced it.

But there is a very sad underside to this story of American success.  It’s the story of those who did not leave Europe.  For the first time in my life I confronted the reality that the Holocaust did not just happen to other families, to other Jews.  Not that I have not been deeply affected by the Holocaust all my life; ever since I read Anne Frank’s diary as a child, I’ve identified with and cried for all those who were murdered by the Nazis.  But I never knew that I had relatives left behind in Germany who were part of that slaughter.  I am still finding more, and I will write about them soon.  The list of names of my cousins who died in the Holocaust grows longer and longer, and I realize more than ever how grateful I should be to Bernard Seligman, John and Jeanette (Dreyfuss) Nusbaum, and Jacob and Sarah (Jacobs) Cohen for leaving Europe and taking a chance on the new country across the ocean.

So this year for Passover I will be thinking about that first major migration of Jews from Europe to America.  I will be feeling thankful for the risks my ancestors took, and I will be feeling the loss of not only all those who were killed in the Holocaust, but the loss of all the children and grandchildren who would have been born but for those deaths.

And overall I will be celebrating family, freedom, and faith—faith that the world can be a better place and that human beings can be their best selves and live good and meaningful lives.  May all of you have a wonderful weekend—be it Passover or Easter or perhaps just another weekend in April for you.   Celebrate all the good things in life in whatever way you can.