I am taking a short break this week from the Schoenthal story to return to a mystery I discovered in the Nusbaum family line. Back in April I wrote about the strange disappearance of Celina Nusbaum, my second cousin, three times removed.  Celina was the granddaughter of Ernst Nusbaum, brother of my 3x-great-grandfather John Nusbaum.  Her life story was intriguing, and I was frustrated that I could not find some closure to her story.

Here’s what I knew: Celina was born in November 1881 in Philadelphia, daughter of Edgar Nusbaum and Viola Barritt.  She had married Hamilton Hall Treager Glessner in 1904, and their daughter Marian Glessner was born in 1906.  But by 1910, the marriage was over, and Celina had returned with her daughter to her parents’ home.  Celina was working as a dress designer, according to the 1910 census.

Celina remarried in August 1912.  Her second husband, Inglis E.D. Cameron, was a lawyer who had graduated from the University of Pennsylvania School of Law in 1909.  He must have been somewhat well-regarded there because he was selected as toastmaster for the class banquet:

Celina and Inglis had a son, Edward James Cameron, born in June, 1915.  On the 1920 census, Inglis, Celina (Selena on the census record), Marian, and Edward (called James there) were living in Philadelphia, and Inglis listed his occupation as a lawyer for a manufacturer. (His name was really butchered by the census enumerator, but this is definitely his family.)

I was able to find Inglis in the 1925 NYC directory as a lawyer in midtown Manhattan, but residing in Philadelphia.

I found one brief news item in the Philadelphia Inquirer about Inglis Cameron as a lawyer, dated April 17, 1924:

I am not quite sure what to make of this article.  It appears that Inglis was representing a client whose identity he would not or could not reveal, but that the newspaper believed was the Fifth Avenue Coach Company, a New York bus company that was seeking to establish business in Philadelphia.

After that, I could not find any trace of any of them; Celina, Inglis, Marian, and Edward James Cameron all seemed to have vanished.  I could not find them in any directory nor on either the 1930 or 1940 census.

But a woman named Sally Carnes with a husband named Donald Carnes and a son named E. J. Carnes surfaced in Texas, in the 1940s.  Why is that relevant? Because this death certificate made it very clear to me that Sally Carnes was the same woman as Celina Nusbaum Glessner Cameron: 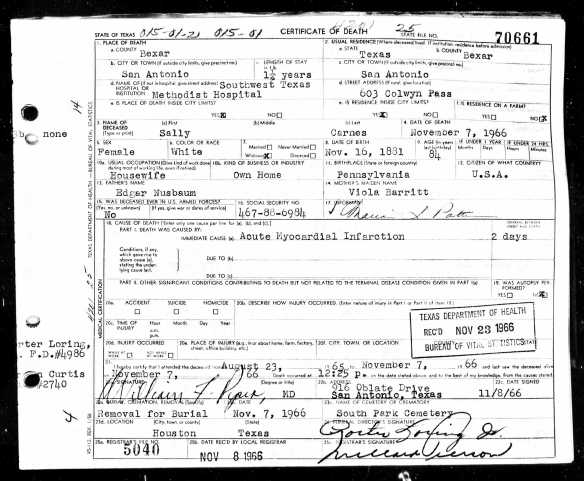 Her parents were Edgar Nusbaum and Viola Barritt, and the informant was her daughter from her first marriage, Marian (using her married name Pattinson).  This had to be Celina.  When I then searched for Carnes in Houston, it led me to the death certificate of Donald Carnes, who had a son named E.J. Carnes:

The initials E.J. for E.J. Carnes?  To me that had to be Edward James Cameron using a different surname, that of the man I assumed was Celina/Sally’s third husband, Donald Carnes.  But I had no further record for Inglis Cameron, no earlier records for Donald Carnes, and no marriage record for Sally and Donald Carnes.  There are further details of my search described here in my earlier post, but the bottom line is that I had no definite answers as to what happened to Inglis or how Celina became Sally Carnes and ended up in Houston.  Even searching for descendants of Marian Glessner Pattinson led me nowhere.

Enter Tracy Carnes, who left a comment on my blog in October. Tracy wrote that she was the daughter of Edward James Carnes, who was the son of Donald Carnes and Lena Claire Nusbaum (Celina was sometimes identified as Lena), also known as Sally Carnes.  That is, Tracy is my fourth cousin, once removed. And she had some answers to my questions and some fascinating information about her grandmother, Sally Carnes, who had once been Celina Nusbaum:

My grandmother, Lena Claire Nusbaum (as listed on my father’s death certificate) or Sally Carnes, was a dressmaker. She had a knack for making fat women look thin and thin women look shapely. I stayed with her in Houston one summer for about a week, and she had dress forms, patterns she was making, and wedding dresses in the works. Mother (Margaret Hannah Barnes Carnes) told us that Sally had the patent on the metal slider that adjusts bra straps. She also designed a slip for Babe Didrikson Zaharias for golfing, called the “super-stride.” Mom and dad said that Sally Carnes had a line of clothing called, “Sally Smart” and four dress factories in Philadelphia lost during the depression. Sally also owned a Russian Tea Room. We don’t have any documentation to support these stories.

So I set out to find some documentation.  I thought the easiest story to validate was the one about the patent on a bra strap slider so I used Google Patents to try and locate such a patent.  Although I did not find one for that specific invention, I did find three patents that were issued to Celina Cameron.  The first, Patent No. 1709337, was filed July 12, 1926, and was issued on April 16, 1929.  That patent was for a garment combining a skirt and bodice.  In her application, Celina wrote:

This invention relates to women’s garments, more particularly garments combining a bodice and skirt. In connection with garments embodying the general characteristics mentioned, I seek to retain all the advantages of the skirt as considered from the esthetic standpoint, and yet afford the wearer the utmost comfort with regard to freedom of leg movement 0 without entailing exposure within the confines of the skirt.

This invention relates to garments of the negligee class and of a type intended more particularly for women.  The object of my invention is to provide a slip-on garment of the kind referred to which is simple in design, yet highly attractive in appearance; which is easily and quickly put on or taken ‘off and which ordinarily affords complete protection, but when desired permits the back of the wearer to be exposed for sun or heat treatment to the exclusion of all other parts of the body. 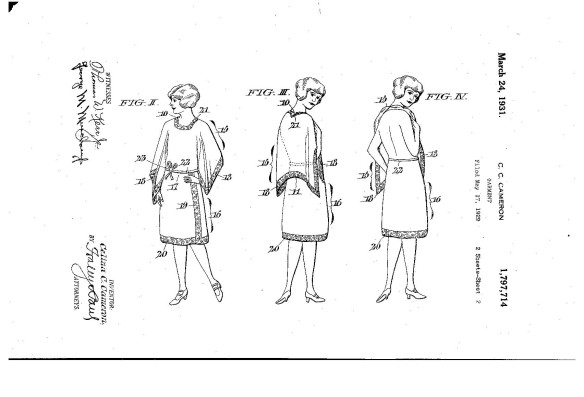 Perhaps this was the slip designed for Babe Didrikson Zacharias?

The third patent issued to Celina Cameron, No. 1834331, was for a modification to the first invention so that it could be reversible.  That patent application was filed on February 19, 1930, and the patent issued on December 1, 1931.

So although I did not find a patent for a bra strap slider, there certainly was truth to the family story that Celina had patented some of her clothing designs.  And from the dates on these patents, I knew that at least until 1930 when she applied for the third patent, Celina was still using the name Celina Cameron.

As for the four dress factories, I found two possible companies.  The first was Cameo Dress Company, which Inglis listed as his company on his World War I draft registration in September, 1918.

When I Googled this company, however, I found that the company had been incorporated on February 27, 1918, by Edgar Nusbaum, Celina’s father. Edgar had for many years worked as a clerk for the railroad, not as a manufacturer.  I assume that he incorporated this business for his daughter Celina, who had listed her occupation in 1910 as a dress designer.  Although Inglis had been working as a lawyer as of the taking of the 1920 census, in the 1921 Philadelphia directory his listing simply says Cameo Dress Company.

But Cameo Dress Company ran into some bad luck.  The company fell victim to thieves at least twice in the spring of 1921, and then suffered a devastating fire in 1922. 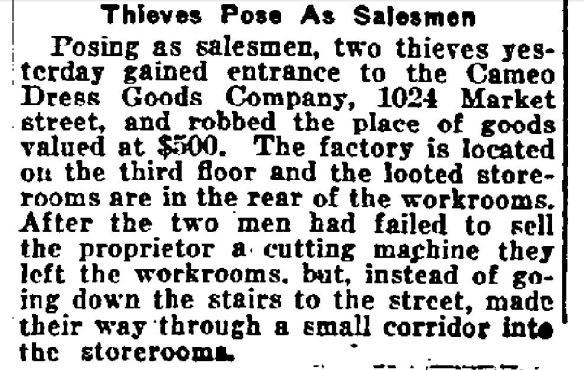 And then just two months later, there was a second theft:

This article made reference to a theft ten days earlier, so it seems that Cameo Dress was subjected to (at least) three thefts in the spring of 1921.

Then, in February 1922, there was a devastating fire:

Was this really all just bad luck? The article about the fire notes that it “started beneath a stairway from an undetermined origin.”  Was someone targeting Cameo Dress Company?

Because almost all of the databases of online newspapers do not include any Philadelphia newspapers after 1922, I could not find out what happened to Cameo Dress Company after the fire.  But there had been an earlier fire that also seemed to involve the Cameron family.  Reginald on the Philadelphia Genealogy group on Facebook found a listing from the Philadelphia fire department’s annual report for 1914:

Annual Report of the Fire Patrol of the City of Philadelphia 1914, available on Google Books, p. 240. https://books.google.com/books?id=VC1EAQAAMAAJ&pg=RA3-PA240&lpg=RA3-PA240&dq=inglis+cameron+fire+mayfair&source=bl&ots=rs-FipaUFg&sig=2EtikjFSEvdMZtWOJSnmlKxIx4w&hl=en&sa=X&ved=0ahUKEwj8wu3cnarJAhUHpR4KHXViCP4Q6AEIHTAA#v=onepage&q=inglis%20cameron%20fire%20mayfair&f=false

I then found this news article: 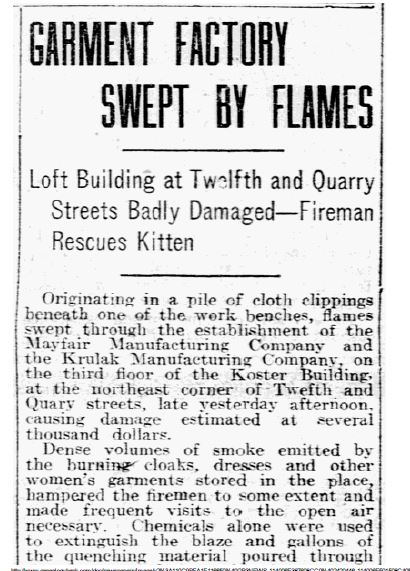 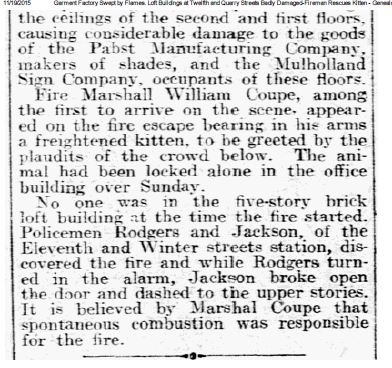 Although I have not yet found anything else about Mayfair Manufacturing Company, I did find it rather strange that another company owned by Inglis Cameron had been damaged by a fire.  As with Cameo Dress, it was a company occupying the third floor of a building.  That time the fire department had opined that it could have been spontaneous combustion—dirty rags, I suppose.

(Of course, I am very glad that they saved the kitten.)

I did not find any documenation for a Sally Smart line of clothing or for a Russian tea room owned by Celina, the last two stories Tracy had shared in her comment about her grandmother .

But what Tracy and I were really interested in was why her grandmother Celina and her father Edward James had moved to Texas and changed their names to Cameron.  Tracy said that her father, Edward James Cameron/Carnes, had died in 1984 and that she had known that he had died with a secret, but not what it was.  Then about 20 years ago, Tracy and her brother received a phone call from an old friend of their father who shared what he knew.  Tracy sent me the notes she and her brother had saved from that phone conversation.  That led me down yet another research path.

20 thoughts on “The Mystery of the Philadelphia Lawyer: Part I”