This is the story of two boys who lost their mother before they were even four years old and who, despite that tragedy, grew up to be very successful.

As I wrote here, my cousin Hattie Baer died at age 33 in 1910.  Hattie and her husband Meyer Herman had had two sons, Justin Baer Herman and Richard B. Herman; Justin was three when his mother died, and Richard was just a few months old.  Five years later in 1915, Hattie’s sister Amanda married her brother-in-law Meyer when those boys were still only eight and five years old, respectively.

Meyer was in the clothing business.  In fact, according to one cemetery record, he worked for the Snellenburg Clothing Company, a clothing manufacturing company and a department store in Philadelphia. 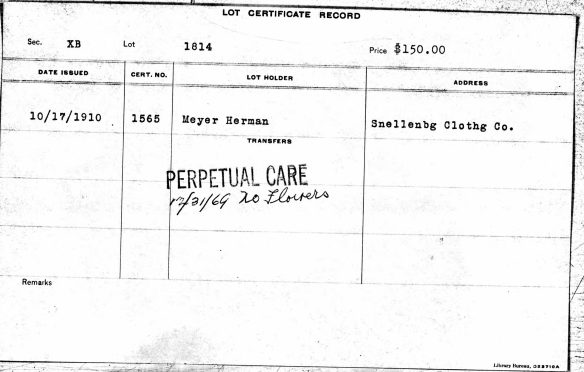 In one of those “small world moments,” I realized that Meyer Herman was working for a company that was owned by the family of another of my relatives: Carrie Snellenburg, who married my great-great-uncle Joseph Cohen, my great-grandfather Emanuel Cohen’s older brother.  The twisted family tree creaks one more time.

By 1930 both of the sons of Meyer Herman and Hattie Baer (nephews and stepsons of Amanda Baer) were working, Justin as a newspaper editor, Richard as a real estate salesman.  Meyer, Amanda, Justin, and Richard were all still living together in Philadelphia.  Justin was 23, Richard 19 at the time of the 1930 census. 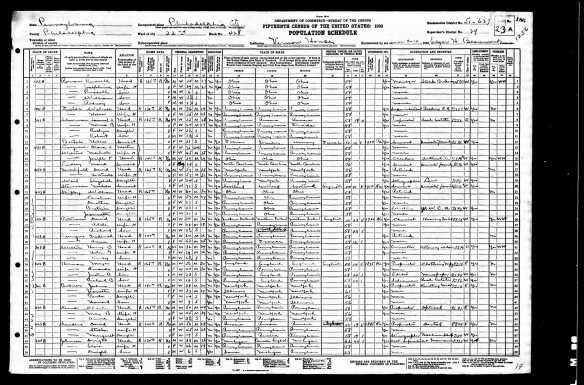 Ten years later Meyer and Amanda were still living in Philadelphia, and Meyer was still working as a clothing salesman.  He was 69 years old, Amanda was 58.  Justin and Richard were no longer living with them.  Both had already established themselves in their chosen careers.

After graduating from the Pennsylvania Academy of Fine Art, Justin had become a successful writer, cartoonist, and screenwriter. He wrote for The Philadelphia Record as a reporter and also established a magazine, The Town Crier, during the early 1930s.  He then moved to New York by 1935, where he was a contributor of poems, short stories, and cartoons to The New Yorker magazine.  During that decade he also starting writing screenplays for short films.  Between 1934 and 1940, he wrote nineteen screenplays for short films, working for Paramount Pictures.  “Justin B. Herman Dead at 76; Writer and Producer of Films,” The New York Times, December 10, 1983.    As of 1940, he was single and still living in New York City. Meanwhile, his younger brother Richard was also doing quite well during the 1930s.  According to his obituary, Richard “got an early start in the business. He convinced his family and teachers that he was bright, and in elementary school, he was permitted to skip two grades. He entered high school when he was 12, and at 17 was working in real estate for the Lionel Friedman Co. In 1933, at age 23, he founded his own real estate firm. Concentrating on major properties, he built Richard B. Herman & Co. into one of the largest real estate firms in Philadelphia. His forte was real estate investment and management.”  “RICHARD B. HERMAN, 71, REAL ESTATE, CIVIC LEADER,” The Philadelphia Inquirer, June 27, 1982, GenealogyBank.com (http://www.genealogybank.com/doc/obituaries/obit/0FBAE8CA0B3A0215-0FBAE8CA0B3A0215 : accessed 5 July 2016).

As of the 1940 census, Richard had married Marion Cohn, and they were living in Philadelphia.  Their son was born later that year.

On August 25, 1941, Meyer Herman died from coronary thrombosis at age 70.  He had survived the loss of his first wife, Hattie Baer, at a very young age and raised two very young sons in the aftermath of her death before marrying Hattie’s sister Amanda five years later.  He must have been very proud of those two sons. 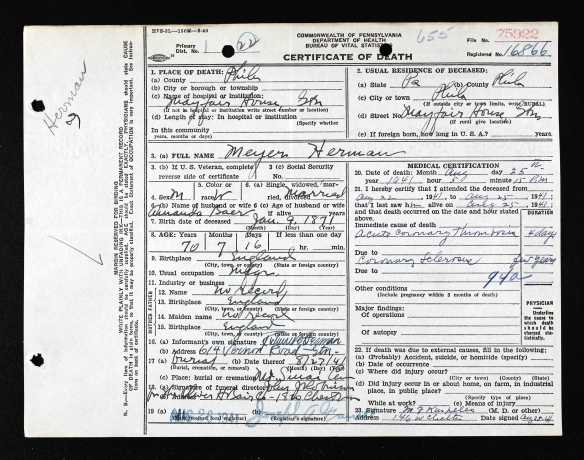 During the 1940s Justin Baer Herman married Alma Baer (as far as I can tell, the fact that her surname was Baer was coincidental; she does not appear to have been related to Jacob Baer’s family).  They would have two daughters.  Justin continued to be a successful screenwriter for Paramount.  Two of the films he wrote were nominated for Academy Awards in the category of Best Short Subject.  According to the Imdb database, he was credited as the writer on 61 films between 1934 and 1955 and as director on 49 of those films, producer on forty.  His obituary claimed even higher numbers: “Mr. Herman produced 118 short subjects in 35 years of film making. Three of them were nominated for Academy Awards – ”Life Line to Hong Kong,” ”Roller Derby” and ”Three Kisses.” “Justin B. Herman Dead at 76; Writer and Producer of Films,” The New York Times, December 10, 1983. 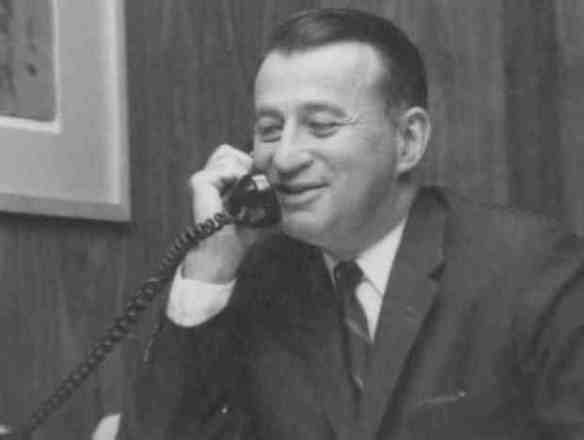 Richard also continued to have success in his career.  His obituary reports that:

One of the original developers of Penn Center, he played a major role in the revitalization of Center City. He helped build, and his firm operated, many of the buildings added to the city’s skyline since 1950. …  Working in Penn Center, he was responsible for much of its growth through such transactions as the sale for Penn Central of the 16th and Market Street sites on which stand such buildings as the Central Penn National Building.   He was also responsible for the sale of the Suburban Station Building to the late Matthew H. McCloskey Jr., and the construction of the IBM Building.  When major buildings were placed on the market, he usually was involved – he handled the sale of the Curtis Building, for example. [As of 1971, his company]  was responsible for the operation and leasing of more than 30 major office buildings containing 4.5 million square feet of space.

In fact, Richard’s real estate development firm was responsible for building the huge apartment building, The Philadelphian, where my aunt Eva Cohen lived for many years. 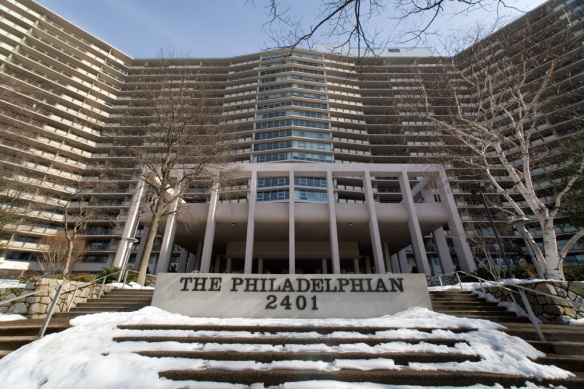 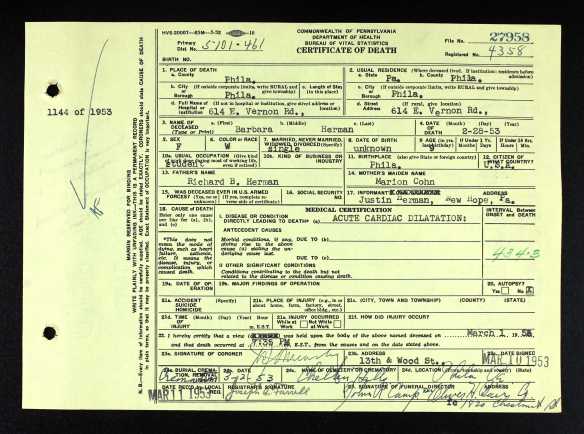 UPDATE: Luanne, a fellow genealogy blogger, asked what I knew about Barbara’s cause of death, so I asked my brother/medical consultant.   He said, “something like viral myocarditis that resulted in cardiogenic shock…would be the most likely diagnosis in a 9 year old.  Acute cardiac dilatation isn’t really a diagnosis, it’s a finding or a descriptive term.[It means an acutely enlarged heart.] Rapid onset cardiogenic shock can also be caused by an MI, valve dysfunction, wall rupture and dysrhythmias, but these would be pretty unusual in a 9 year old. It is also possible she had septic shock which, in the end, caused her heart to dilate (enlarge) and fail.”  For those (like me) who need a definition of cardiogenic shock, MedlinePlus says, “Cardiogenic shock is when the heart has been damaged so much that it is unable to supply enough blood to the organs of the body.”

Justin and Richard’s aunt and stepmother Amanda Baer died on July 28, 1969; she was 89 years old.  She was buried in Mt Sinai cemetery in the same lot as her husband, Meyer Herman, and her sister, Hattie Baer, Meyer’s first wife. Meyer was buried between his two wives, the two Baer sisters.

Like Meyer, Amanda must have been very proud of her two nephews, Justin and Richard, whom she had helped raise perhaps even before she had married their father in 1915.

Richard Herman died on June 25, 1982.  He was only 72 years old.  I have already quoted extensively from his Philadelphia Inquirer obituary, but want to add these additional insights into who he was beyond a highly successful real estate developer:

Mr. Herman was a member of the prestigious Committee of 70, and a director of the Philadelphia Museum School of Art and the Franklin Institute. He was former chairman of the nonsectarian National Jewish Hospital in Denver and of divisions of United Fund and United Way drives.   He was active in the Rittenhouse Astronomical Society, the Pennsylvania Historical Society, and the Philadelphia Art Alliance.

Mr. Herman was the only man to head both the Society of American Magicians and the International Brotherhood of Magicians simultaneously.

He was a member of the Citizens Council on City Planning and the Germantown Historical Society.

He was a man with an endless curiosity and an I.Q. high enough to make him eligible for membership in Mensa, an organization for the very intelligent. He taught himself art, sculpture and music. He learned to play the organ on his own. He had his own observatory.

His art was displayed in his home and his office, accompanying his collections of such things as pipes. He also collected instruments related to astrology and medicine, children’s toys and signs. 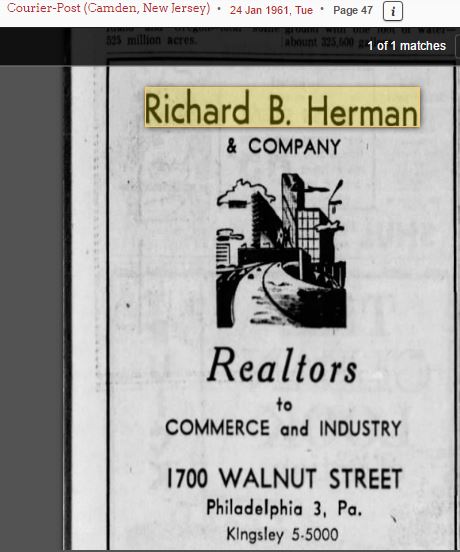 These two men who lost their mother before either was four years old certainly left their mark in their respective fields, one an Oscar nominated screenwriter, the other a highly successful real estate developer and civic leader.

22 thoughts on “The Screenwriter and the Real Estate Mogul”