I am very excited to announce that Ernest Lion’s memoir, The Fountain at the Crossroad, has now been published and is available on Amazon.com both as a paperback ($10.50) and an ebook ($2.99). [UPDATE: the Kindle version is now available!] It has been my honor and privilege to bring this book to the public with the permission and assistance of Ernest’s son Tom.  I did this because I found the book unforgettable and because I don’t want Ernest or his life to be forgotten.  Tom and I are not deriving any financial gain from sales of the book. All net proceeds received from sales of the book will be donated to the United States Holocaust Memorial Museum in memory of Ernest Lion. 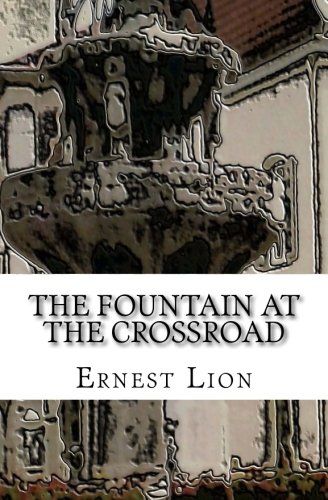 I have written about some aspects of Ernest’s life on the blog as he was married to my cousin, Liesel Mosbach, granddaughter of Rosalie Schoenthal, my grandfather’s sister.  Ernest and Liesel were deported from Germany to Auschwitz in early 1943; Liesel was murdered there, but Ernest survived.

The story of what he endured and how he survived is moving and horrifying.  His determination and courage in the face of unimaginable suffering is a story of what it means to be human when you are surrounded by inhumanity. And Ernest’s escape from the Nazis kept me on the edge of my seat even though I knew that he would survive.

But the book is not only about Ernest’s experience during the Holocaust.  It also tells the story of his childhood growing up with his parents in Germany and of his early adulthood when he dreamed of being an actor.  In addition, Ernest wrote about his life after the war—how he rebuilt his life in the US, starting all over, scarred by his experiences, but nevertheless determined to have a full and meaningful life.

Ernest only started talking about his Holocaust experiences late in his life, and then he was persuaded to write his memoirs.  In doing so, he relived much of the pain, but also reached a very poignant conclusion about the value of his own life.

19 thoughts on “Ernest Lion’s The Fountain at the Crossroad: An Unforgettable Book”