I am continuing to try and learn German, studying about thirty minutes a day on Duolingo, and at times I feel like I have reached a plateau.  The more words I learn, the more I forget the ones I learned just a month ago.  All those words that end in –ung and/or start with ver- are getting too hard to keep straight.  And why are there at least two words for so many things?  Sure, I know that’s true in English also, but it was a lot easier learning English when my brain was young and flexible and everyone around me spoke it all the time.  Learning German at my age without some immersion is, to the say least, a challenge.

So I took great comfort in Mark Twain’s 1880 essay, “The Awful German Language.” Vera Meyer of the Facebook group “JEWS—Jekkes Engaged Worldwide” (“Jekke” or “yekke” has various specific meanings, but most broadly refers to a person of German-Jewish background) sent me a link to Twain’s essay the other day, and it made me laugh out loud several times over.

Twain is one of my favorite authors, but I’d never before read this essay, and if I had, I would not have appreciated it before my own struggles with German.  You can find the entire essay here and I recommend it highly, but I want to quote just a few of my favorite passages.  Favorite because I relate so well to what Twain is saying.

This complaint is one that also gives me great frustration:

Personal pronouns and adjectives are a fruitful nuisance in this language, and should have been left out. For instance, the same sound, sie, means you, and it means she, and it means her, and it means it, and it means they, and it means them. Think of the ragged poverty of a language which has to make one word do the work of six — and a poor little weak thing of only three letters at that. But mainly, think of the exasperation of never knowing which of these meanings the speaker is trying to convey. This explains why, whenever a person says sie to me, I generally try to kill him, if a stranger.

And then there is the endless battle to figure out what is the gender of a particular noun so that you know what articles, pronouns, and adjectives to use:

Every noun has a gender, and there is no sense or system in the distribution; so the gender of each must be learned separately and by heart. There is no other way. To do this one has to have a memory like a memorandum-book. In German, a young lady has no sex, while a turnip has. Think what overwrought reverence that shows for the turnip, and what callous disrespect for the girl. ….

To continue with the German genders: a tree is male, its buds are female, its leaves are neuter; horses are sexless, dogs are male, cats are female — tomcats included, of course; a person’s mouth, neck, bosom, elbows, fingers, nails, feet, and body are of the male sex, and his head is male or neuter according to the word selected to signify it, and not according to the sex of the individual who wears it — for in Germany all the women either male heads or sexless ones; a person’s nose, lips, shoulders, breast, hands, and toes are of the female sex; and his hair, ears, eyes, chin, legs, knees, heart, and conscience haven’t any sex at all. The inventor of the language probably got what he knew about a conscience from hearsay.

And then finally, Twain’s overall lament about learning German:

My philological studies have satisfied me that a gifted person ought to learn English (barring spelling and pronouncing) in thirty hours, French in thirty days, and German in thirty years. It seems manifest, then, that the latter tongue ought to be trimmed down and repaired. If it is to remain as it is, it ought to be gently and reverently set aside among the dead languages, for only the dead have time to learn it.

Alas, at my age, if it really takes thirty years, it will take the rest of my life (if I am very lucky) to learn German.

But like Mark Twain, I will continue to muddle along, at least knowing that I am in good company in my struggles. 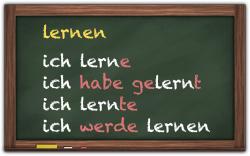