Back in April, I wrote about the family of Rosalie Schoenthal, my great-grandfather’s sister, the one who stayed in Germany to marry Willy Heymann.  Most of what I knew of their fate I learned from the memoir written by Ernest Lion, the man who married Rosalie and Willy’s granddaughter, Liesel Mosbach.  Liesel, her sister, her parents, and her aunt, were all victims of the Holocaust. Ernest Lion memorialized them all in his heartbreaking memoir, The Fountain at the Crossroad.

As I mentioned in a subsequent post written for Yom Hashoah in May, I was so moved by Ernest’s story that I tracked down his son Tom to ask about getting it published so that it could be more widely read.  Since then, I have been working with Tom to edit and format the memoir for publication.  (We’ve run into a few obstacles, but that’s a story for another day.)  I am hoping that sometime soon the book will be available for distribution. When it is, I will post the relevant information on the blog.

But none of this would be possible without the help of another of my cousins by marriage, Sharon.  Sharon is married to the great-grandson of Simon Schoenthal, who was also my great-grandfather’s brother as well as Rosalie Schoenthal Heymann’s brother.  And Sharon, who writes the blog The Heart and Craft of Life Writing, has a great deal of knowledge not only about writing, but also about getting your writing published.  Sharon and her husband were the ones who shared with me the remarkable memoir written by Hettie Schoenthal Stein.  So when I decided to try and get Ernest Lion’s book into a publishable format, I turned to Sharon for help.

Sharon spent hours through email and Skype instructing me on how to turn a typed manuscript into a format that is not only more readable, but also professional looking.  She has been incredibly patient with me, as all this was new to me, and the old brain isn’t quite as flexible as it once was.  I cannot possibly express how grateful I am to her for her help.

One of the last things we worked on was inserting photographs into the memoir, and as she was doing this, Sharon was struck by the resemblance she saw between Liesel Mosbach Lion, Ernest’s first wife and our mutual cousin, and Sharon’s mother-in-law, Blanche Stein Lippincott.  She sent me a photograph of Blanche and her family that I had not previously seen.

And here is a photograph of Liesel Mosbach and Ernest Lion that I obtained from Ernest’s son to put into his book:

Liesel Mosbach and Ernest Lion Courtesy of the Lion Family

The resemblance is striking.  Blanche and Liesel were second cousins, but from these two photographs, they could have been sisters. 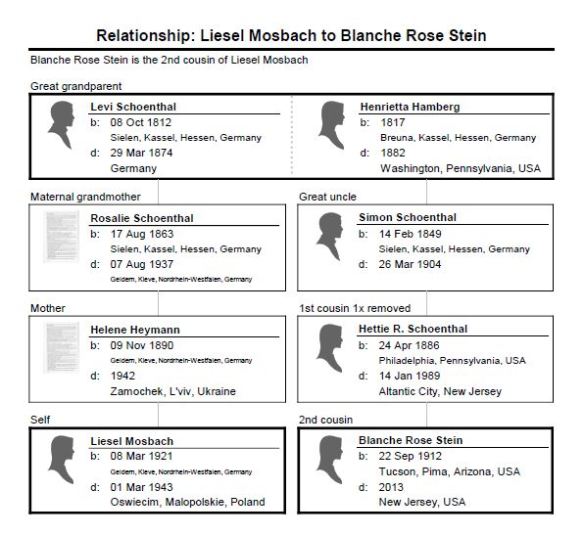 But what different lives and fates they had, and the expressions on their faces in these two photographs reflect those differences. While Blanche looks healthy and happy, Liesel looks drawn and sad, even on her wedding day.

Blanche was born in 1912 in Tucson, Arizona, and grew up living on the American frontier in the 1910s and 1920s.  Her mother Hattie and her aunt Gertrude had ventured out west after growing up in Philadelphia and Atlantic City.  They did later return to the East, as I’ve written, and Blanche spent the rest of her life living in New Jersey.  She married in 1937 and raised two children with her husband Ezra.  Blanche lived a long and happy life, making it to almost 101 years old before dying in 2013.  Her mother Hettie had made it to 103.

Blanche Stein Lippincott with her great-granddaughter 1996

In contrast, Liesel lived a short and tragic life.  She was born in 1921 in Germany, where her father Julius Mosbach owned a fruit and vegetable stand. The family was probably living a comfortable enough life until Hitler came to power.  When Liesel married Ernest Lion on December 18, 1939, conditions for Jews were terrible in Germany, and the young couple had no idea what the future would bring.

There would, in fact, be no future. As a result of the Nazi oppression and the loss of his business, Julius Mosbach suffered a nervous breakdown; in 1941, he was sent to an institution where instead of being treated, he was murdered by the Nazis. In 1942, Liesel’s mother, sister, and aunt, and Ernest’s father were all deported and eventually killed in a Nazi concentration camp.  In 1943, Liesel and Ernest were deported to Auschwitz, where Liesel was killed.  Ernest survived and eventually escaped; he became the voice for the whole family.

Thus, Blanche and Liesel, second cousins who looked like sisters, had far different lives and fates.  I can’t help but think, what if Rosalie and Willie had come to the US like almost all of Rosalie’s siblings? What if Liesel and her sister Grete had grown up in Pennsylvania or anywhere else in the United States?

As the president of our synagogue reminded us on Rosh Hashanah, we cannot control where we are born, when we are born, or to whom we are born.  Some of us are blessed with good luck in all of those things while others are not.  We should never take that for granted.