In my last two posts about Hettie Schoenthal, I was very fortunate because Hettie and her son Walter had written down their own memories and stories, making their lives so much more vivid and authentic than I could have ever done myself.  The wonderful photographs that their family provided also helped me tell the story of Hettie Schoenthal, her husband Henry Stein, and their two children, Walter and Blanche. 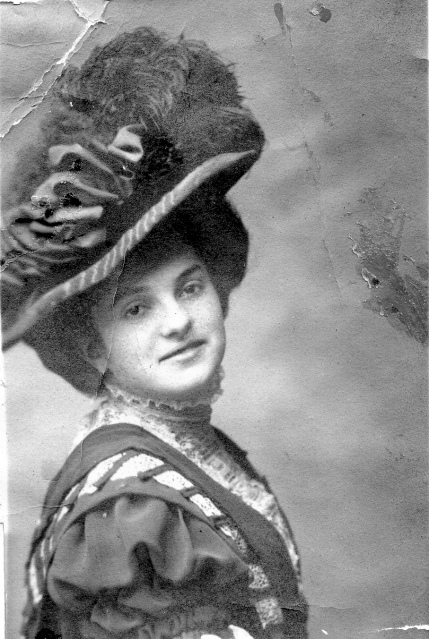 Hettie Schoenthal, 1906
Courtesy of her family

It was a reminder of how important it is for all of us to write about our own lives and to take and preserve photographs so that someday our descendants will benefit from these shared words.  My newly discovered cousin Sharon Lippincott, daughter-in-law of Blanche Stein Lippincott, writes  about the art of writing memoirs at her blog, The Heart and Craft of Life Writing, and has also published books on that subject.

In this post, I hope to convey how Hettie’s optimistic and energetic personality left its mark on her two children, both of whom also lived long and happy lives and were well-loved by many.  All photos are courtesy of their family.

Hettie and Henry had moved east from Arizona to Philadelphia in 1924, and a few years later their son Walter left home and moved to Atlantic City to work in his aunt’s hotel there, as seen on the 1930 census.  Walter remained in the Atlantic City area for the rest of his life, working in a restaurant and as a salesman over the years.  He married Ruth Levaur in 1938, and they had one daughter.

His sister Blanche also married in the 1930s, marrying Ezra Parvin Lippincott in 1937.  Ezra was a New Jersey native and a graduate of Rutgers University, and he worked as a banker and in the insurance business. They lived in New Jersey and had two children, a son and a daughter.  Sadly, Ezra died in 1969, leaving Blanche as a widow at only 57.

I don’t have a lot of “official” records about Walter or Blanche after 1940, but I don’t need them to convey the character and personality of these two people. Other people have already written about them both.

Both Walter and Blanche must have inherited their mother’s gene for longevity.  Walter died in 2007 at age 96, and Blanche died in 2013 when she was 101 years old.

Walter Stein in Atlantic City, 1987
courtesy of the family

Walter’s obituary from the Press of Atlantic City gives a vivid portrait of the man who spent his childhood with burros and snakes in Ray, Arizona:

Walter was born in Tucson, Territory of Arizona on October 9, 1910. He was recognized as a pioneer. He spent his childhood in Ray, Arizona in a mining camp and took pleasure in saying that his boyhood was what every boy dreams of. The family moved to Philadelphia in 1923, where Walter graduated from high school. In 1929 he went to Atlantic City for a vacation and never left the area except for four years. He met and married Ruth Levaur in 1938. They recently celebrated their 68th anniversary.

Walter was a fine fisherman, a championship bowler and a prize-winning marksman. He served on many boards, but his favorite was the 23 years he served on the Board of Friends of the (PAC) Performing Arts Center of Stockton College. Walter had a deep love of the theater. Some of his happiest moments were spent with Ruth and friends at the Metropolitan Opera, the Philadelphia Orchestra, the Ballet, the theater and museums. He was Vice President of Atlantic Beverage for 35 years. ….

Walter was loved and respected by all who knew him. His sense of humor, his positive spirit and generous nature placed him in a class by himself. He was often referred to as a man of all seasons, and he truly was.

Blanche also seems to have inherited her mother’s optimistic and adventurous spirit; her daughter-in-law Sharon wrote this about her on her blog on the occasion of Blanche’s 100th birthday:

Blanche was born 100 years ago in Tucson, in the newly admitted state of Arizona. Her family soon moved to Ray, Arizona, a now deserted copper mining community, where they lived until she was about twelve. When the copper industry declined, her parents, along with a few aunts and uncles, decided to move back to Philadelphia.  ….

If you asked her, she’d tell you she has had a rather ordinary life, and so it may seem to some. She’s never done anything truly flamboyant. She hasn’t set records, started a business, or written a best-seller. But she has tackled life with gusto, always open to new adventures and experiences. ….

Perhaps her  most important attribute is her devotion to family, friends and community. ….  No family member or friend ever has to ask for help – things are taken care of, often before the need is recognized. She always has something good to say about anyone she speaks of, and she excels at showing gratitude and appreciation. …

I could not ask for a sweeter, more supportive and helpful mother-in-law, nor is anyone prouder than she of her two children and their spouses, her five grandchildren and their spouses, and her six great-grandchildren. She is the most optimistic person I know, and should I live to be 100, I hope I’ll be as vital and involved as she continues to be.

Blanche Stein Lippincott with her great-granddaughter 1996

You can read the rest of Sharon’s tribute to her mother-in-law Blanche at her blog here.

I feel very privileged to be even distantly related to Hettie and her children, who were, respectively, my first cousin, twice removed (my grandmother’s first cousin) and my second cousins, once removed (my father’s second cousins).  It’s just too bad that I missed the opportunity to know them in person, given how long and how close by they all lived.

Blanche and Walter, August 9, 2006
courtesy of the family

This post completes my research of the family of Simon Schoenthal and Rose Mansbach and their many children.  This has been a line of the family that has been a joy to research.  Although there were a few sad stories, this was a family of people who lived long lives and seemed to enjoy those lives.   They stayed close to one another even though at times they were separated by long distances.  And most of them spent much of their lives close to their childhood hometown of Atlantic City, New Jersey, once called the World’s Playground.

Unfortunately, the next chapter—the story of Simon’s brother Jakob and his family—is not as joyful.

11 thoughts on “Hettie’s Spirit Lives On: Her Children Walter and Blanche”