By 1893, H.H. Mansbach had lost his father and both his brother and sister.  It’s hard to know what kind of relationship he’d had with them all after serving on the opposing side of the Civil War, though it did appear that the families had some overlapping connections, as pointed out in my last post.  But what happened to H.H. and his family after these losses?

H.H.’s business was doing very well, and according to this article in the April 1893 Piedmont Herald, by that time he had opened stores in Wheeling, West Virginia, as well as Baltimore and Cumberland, Maryland, where Nannie’s family continued to reside.  It also appears from this article that by 1893, H.H. and Nannie were also residing in Cumberland.  A partial transcription of the article (with paragraphing added for readability) appears below: 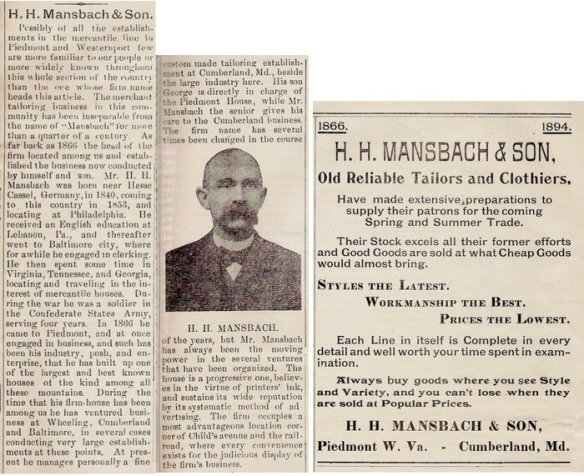 Possibly of all the establishments in the mercantile line in Piedmont and Westernport few are more familiar to our people or more widely known throughout this whole section of the country than the one whose firm name heads this article.  The merchant tailoring business in this community has been inseparable from the name “Mansbach” for more than a quarter of a century.

As far back as 1866 the head of the firm located among us and established the business now conducted by himself and son. [biographical information previously described] In 1866 he came to Piedmont, and at once engaged in business, and such has been his industry, push, and enterprise that he has built up one of the largest and best known house of the kind among all these mountains.  During the time this his firm-house has been among us he has ventured business at Wheeling, Cumberland, and Baltimore, in several cases conducting very large establishments at these points.

At present he manages personally a fine custom made tailoring establishment at Cumberland, Md., beside the large industry here.  His son George is directly in charge of the Piedmont House, while Mr. Mansbach the senior gives his care to the Cumberland business.  The firm name has changed in the course of the years, but Mr. Mansbach has always been the moving power in the several ventures that have been organized.  The house is a progressive one, believes in the virtue of printers’ ink, and sustains its wide reputation by its systematic method of advertising. …

Thus, H.H. by 1893 was quite a successful businessperson. In the 1890s the older Mansbach children began to marry and move out on their own.  Hattie, the oldest daughter, married Milton Hirschman on December 26, 1893.  Milton was born in Pennsylvania, at one time had lived in New York, but was living in Morgantown, West Virginia in 1893. 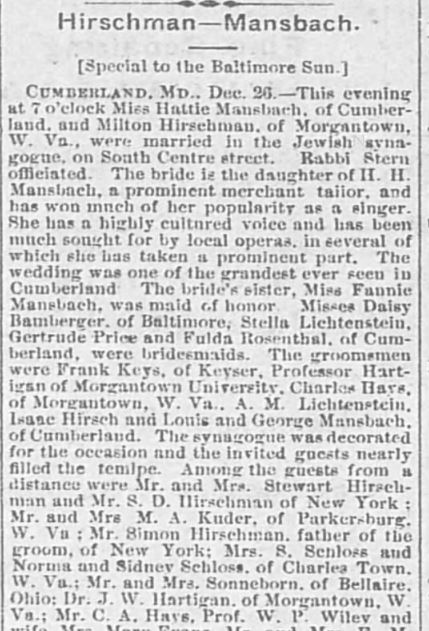 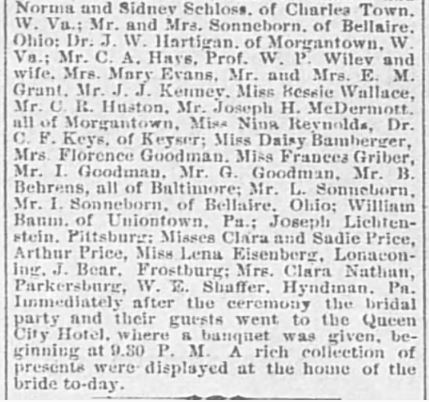 This evening at 7 o’clock Miss Hattie Mansbach, of Cumberland, and Milton Hirschman, of Morgantown, were married in the Jewish synagogue on South Centre Street.  Rabbi Stern officiated.  The bride is the daughter of H.H. Mansbach, a prominent merchant tailor, and has won much of her popularity as a singer.  She has a highly cultured voice and has been much sought for by local operas, in several of which she has taken a prominent part. ….

The article then follows with a list of guests.  The only names that I could recognize as being part of the Mansbach/Katzenstein family were Hattie’s siblings Fannie, Louis, and George, who were in the bridal party.  Of course, this was shortly after Henrietta Mansbach Gump had died so perhaps it is not surprising that there are no Gump family members included on the list.

The family had another elaborate wedding on March 29, 1898, in Parkersburg, West Virginia when Louis Mansbach married Clara Nathan.

Again, the only familiar names here are those of the groom’s immediate family—his parents and his siblings.  None of the children of either Henrietta Mansbach Gump or of Abraham Mansbach were listed among the attendees.  So perhaps there were some lingering bad feelings between H.H. and his relatives.  Hard to know.

In January 1899, Louis and Clara had a child, Frances N. Mansbach, who died just six months later on July 19, 1899. At first, I was led to believe that Frances was the daughter of Harry H. and Nannie Mansbach because that’s what it indicates on her FindAGrave memorial.  But I was skeptical.  In 1899, Nannie would have been about 53 years old, and she had not had a child in over 12 years.  To me, it seemed more likely that this was the child of Louis Mansbach and his wife Clara. 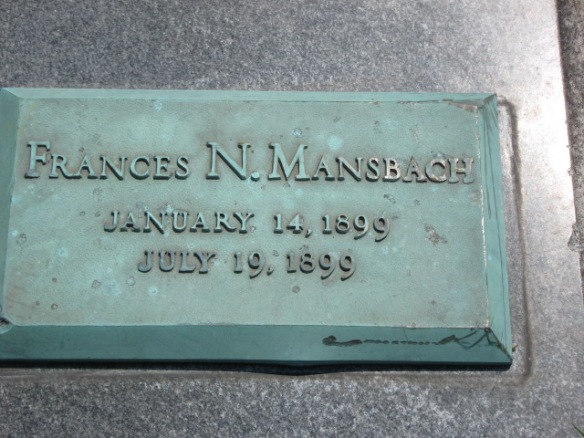 Not only did Nannie’s advanced age support this conclusion, but on the 1900 census, Clara reported that she had had one child, still alive (see the last column below).  There was, however, no child is living with them.

In addition, the 1900 census for H.H. and Nannie Mansbach reported that Nannie had had eight children, eight of whom were still living (last column on Nannie’s line).  Frances would have been a ninth, if she were Nannie’s child.

Thanks to Cathy Meder-Dempsey of Opening Doors in Brick Walls, I was able to confirm my hunch that Frances was the child of Louis and Clara (Nathan) Mansbach.  Cathy pointed me to the West Virginia Vital Research Records Project, where I was able to locate both the birth and death records for little Frances Mansbach:

The death record makes it quite clear that Frances was the child of Louis and Clara.  She died of cholera infantum.  How devastating that must have been for the couple, who’d only married a little over a year before their daughter’s death.  They never had another child.

H.H. and Nannie’s second daughter Fannie was the next to marry; she married Daniel Rose Broh of Parkersburg, West Virginia, on September 6, 1898.  Of particular interest in this wedding announcement is the fact that Jacob Katzenstein, Fannie’s first cousin and my great-grandmother Hilda’s brother, attended the wedding, suggesting that H.H. and his family had not severed all ties with their Katzenstein relatives even after his father and siblings had died. But Jacob was the only Katzenstein family member listed, and there were no Gumps or Mansbachs, except for Fannie’s siblings and parents. 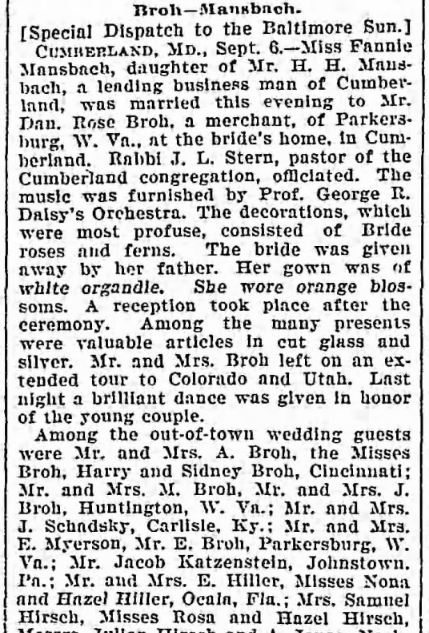 Thus, by 1900, three of the four oldest children of H.H. and Nannie were married.  Where were they and all the other members of the family of HH and Nannie Mansbach living when the 1900 census was taken?

But by 1900, H.H. and Nannie (Hirsch) Mansbach had relocated with three of their other children, Charles, Bertha, and May, to Cumberland, Maryland, where Nannie’s family still resided.  Charles and his father were working as dry goods merchants in Cumberland.

As for the Mansbach’s youngest son, Isaac, he was living in Allegheny, Pennsylvania (today part of Pittsburgh), studying law. He had previously been a student at Morgantown University.

Thus, the years after the Civil War were highly successful years for H.H. Mansbach and his family.  His business was thriving, he was able to provide lavish weddings for his children, and he even had a son who was going to be a lawyer.

Harder times were ahead, however, in the 20th century.

I was honored to be interviewed by Michelle Ganus Taggart for Geneabloggers.  You can read the interview here.