My great-great-uncle Jacob Katzenstein was, like his sister Brendena, a man who faced a great deal of tragedy but managed to survive and, in his case, start all over with a new family.  In 1889, he lost first born child, Milton, at age two and a half, and then both his wife, Ella Bohm, and his other young son Edwin in the devastating Johnstown flood.  I’ve written about Jacob and these events in prior posts.

In one of those posts, I also described my search for more information about Ella Bohm and my hypothesis that she was the daughter of Marcus Bohm and Eva Goldsmith; I assumed Eva was her mother as Ella is listed on the 1880 census as the niece of Jacob Goldsmith, Eva’s brother.  Eva Goldsmith was also my distant cousin—her mother was Fradchen Schoenthal, my great-grandfather Isidore’s sister; her father was Simon Goldschmidt, my great-grandmother Eva Goldschmidt’s uncle.  And if I am right that Ella Bohm was Eva Goldsmith’s daughter, then Ella married her cousin when she married Jacob Katzenstein, as he was Eva Goldschmidt’s son. 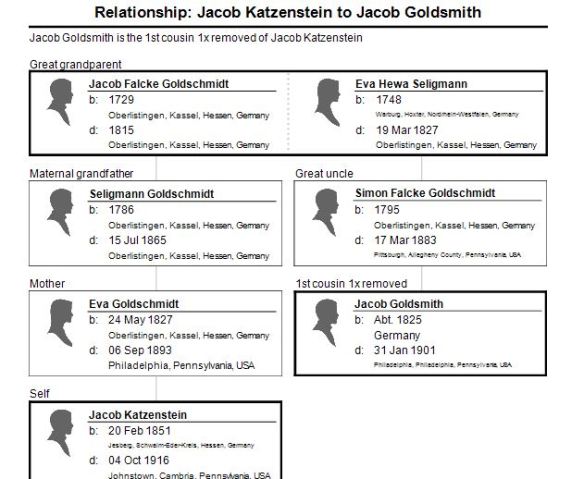 But I had no definitive proof that Eva Goldsmith was Ella’s mother.  I also had not been able to find out when Jacob Katzenstein married Ella or why their first-born son Milton died.  On my cousin Roger’s old genealogy website, he had included a quote about Jacob from a book called The Horse Died at Windber: A History of Johnstown’s Jews of Pennsylvania by Leonard Winograd (Wyndham Hall Press, 1988).  I decided to track down this book to see if it revealed any more information about Jacob Katzenstein and Ella Bohm and their lives.

I was able to borrow a copy of the book through the Interlibrary Loan system from my former employer, Western New England University, and have now read the book.  Unfortunately it did not answer my two principal questions.  I still don’t know for sure who was Ella Bohm’s mother, and I still don’t know what caused the death of little Milton. I did, however, learn more about Ella’s father Marcus Bohm, about Jacob Katzenstein and his second wife Bertha and their children, and about the Johnstown Jewish community at that time and its history.

According to Winograd, in the second half of the 19th century when many Jewish immigrants started arriving from Europe, many made a living as peddlers, as I’ve written about previously. Pittsburgh was a popular hub where these peddlers would obtain their wares and then travel by foot or horse and wagon or train to the various small towns in western Pennsylvania. Winograd states that by 1882 there were 250 to 300 peddlers operating this way out of Pittsburgh. (Winograd, p. 12)

Eventually these peddlers would find a particular town to settle in and would set up store as a merchant in the town. But Pittsburgh remained the center for Jewish life.  These merchants and peddlers would attend synagogue there, participate in Jewish communal life there, and be buried there. Often they would move on from one town to another or return to Pittsburgh itself. (Winograd, p. 12-13)

Johnstown was a bit too far to be part of this greater Pittsburgh community (65 miles away), and although peddlers and merchants did come through there and even settle temporarily there, it was a more isolated location than the towns that became satellites of Pittsburgh.  Thus, its social, economic, and religious life was independent of the Pittsburgh influence.

Winograd reported that Johnstown had a population growth spurt between 1850 and 1860, jumping from 1,260 to 4,185.  In 1856, there were nine churches in Johnstown, but no synagogue (although there was apparently an attempt to start one in 1854).  The Jewish families in the town had services in their homes; there was not a large enough population to support the establishment of a synagogue at that time. (Winograd, p. 26) In 1864, the Jewish merchants in town formed a merchants’ association regulating store hours. Most of these merchants came from the Hesse region of Germany, as did Jacob Katzenstein. (Winograd, p. 48)

Two of those early merchants in the 1860s were Sol and Emanuel Leopold. (Winograd, p.56)  It was their sister Minnie Leopold and her husband Solomon Reineman with whom Marcus Bohm was living in 1910; Solomon Reineman came to Johnstown in 1875. (Winograd, pp. 77-78) Sol and Emanuel Leopold’s other sister Eliza Leopold Miller was Bertha Miller’s mother—that is, Jacob Katzenstein’s mother-in-law when he married Bertha Miller. As Winograd points out in Appendix C to his book (pp. 281-283), many of the Jewish merchants in town were related either directly or through marriage.

According to Winograd, both Marcus Bohm and Jacob Katzenstein came to Johnstown in the 1880s. Here’s what he wrote about Marcus Bohm: 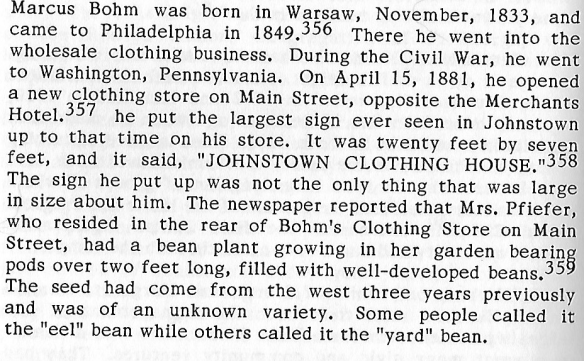 Winograd wrote that Jacob Katzenstein first came to Johnstown in 1882 as a clerk for another merchant. He married Ella Bohm on March 26, 1883, (Johnstown Daily Tribune, May 16, 1883, p. 4, col. 7).  Winograd even mentioned their wedding.  In discussing what he described as “the first public Jewish wedding” in Johnstown, which took place in 1886, Winograd says, “There had been an earlier Jewish wedding, that of Jacob Katzenstein to Ella Bohm on March 26, 1883, a private ceremony conducted by J.S. Strayer, Esquire.” (Winograd, pp. 93-94)  The implication appears to be that Jacob and Ella might have been the first Jewish couple married in Johnstown. Based on the date, I was able to locate a marriage notice from the May 16, 1883, edition of the Johnstown Daily Tribune (p. 4, col. 7).

According to Winograd, Jacob and Ella lived in rooms over the store of another Johnstown merchant, Sol Hess. Sol Hess was the brother-in-law of Emanuel Leopold, who had married Sol’s sister Hannah. In March 1884, Marcus Bohm moved in with Jacob and Ella and soon thereafter, Marcus lost his own store when an Eastern dealer executed a judgment of $2,625 dollars against him. (Winograd, pp.78-79)

According to Winograd, Jacob moved back to Philadelphia for a few years.  This must have been when Jacob and Ella’s first son Milton was born in 1886, but by June 1887 when Edwin was born, they must have returned to Johnstown. Here is a photograph of Johnstown in 1880s, showing what it must have looked like when Jacob Katzenstein first settled there: 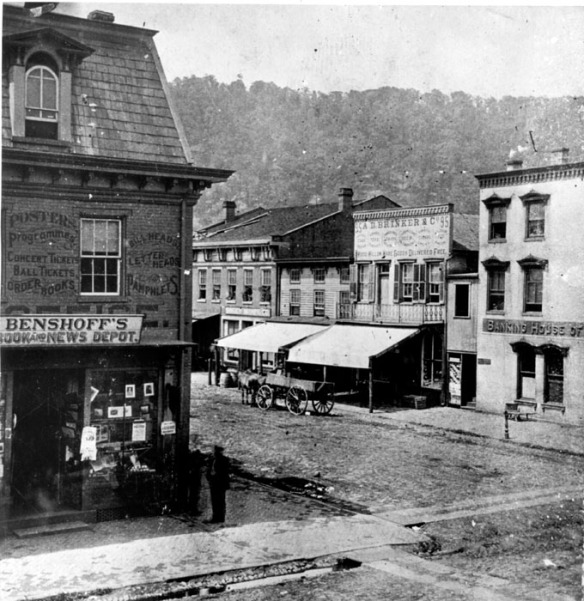 Johnstown in the 1880s
located at http://www.jaha.org/edu/flood/why/img/before_gallery/pages/Benshoffcorner.html

As noted, 1889 was a tragic year for Jacob.  First, there was the tragedy of Milton’s death on April 18, 1889 (Johnstown Daily Tribune (April 18, 1889, p. 4, col. 2), and then the deaths of Ella and Edwin on May 31, 1889, during the flood.  According to Winograd, Ella and little Edwin were in their house on Clinton Street when the flood waters rushed into the city, causing the house to collapse.  After the flood, Jacob lived in one of the temporary structures erected in Johnstown’s Central Park. (Winograd, p. 79) 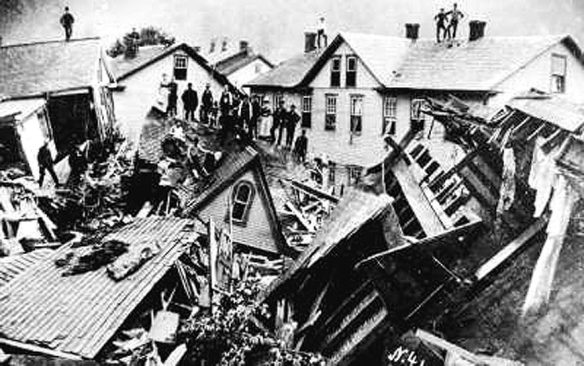 It was during the 1880 and 1890s that formal, organized Jewish life really developed in Johnstown. Before that time, the primarily German Jewish residents of the town, who came from a Reform background and, as Winograd observed, identified more as German than Jewish in many ways, had services in their private homes and holiday celebrations with their families, but there were no official synagogues or rabbis in the town. (Winograd, pp. 77, 87-88, 103-107)

Then, with an influx of Russian Jewish immigrants in the 1880s who came from a more traditional, Orthodox background, there was a demand for more of the organized elements of Jewish communal life, including a synagogue, Hebrew school, and kosher butcher.  (Winograd, pp. 76-77) In the 1890s, two synagogues were organized: Rodeph Shalom for the more Orthodox Jews in town and Beth Zion for the Reform Jews.

Beth Zion grew out of a Jewish social club, the Progress Club, of which Jacob Katzenstein was an organizer and founding member in 1885. (Winograd, pp. 80, 148). The group used their building (known as the Cohen building) for services, but it was not until 1894 that they had their first Reform High Holiday Service; there was still no full time rabbi, and lay people often led services. (Winograd, pp. 148-151) 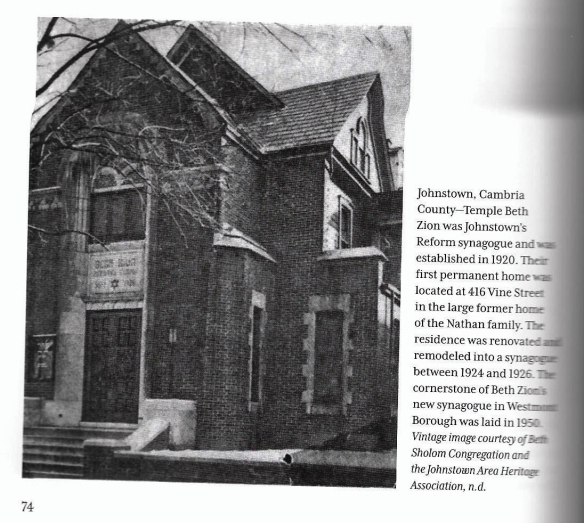 Jacob was an officer in Beth Zion Temple. (Winograd, pp. 79-80)  In 1905 he donated five dollars to a fund to provide assistance to Jews in Russia who were being persecuted. (Winograd, pp. 114-116) In 1907, his son Gerald celebrated becoming a bar mitzvah the evening before Rosh Hashana; in 1912 when Gerald’s brother Leo became a bar mitzvah, it also was celebrated during the high holidays. Winograd described the Beth Zion congregation at that time as small, but tightly knit.  (Winograd, pp. 150-151) Obviously, Jacob Katzenstein and his family were active members in this community.

By 1910, Jacob and Bertha’s children ranged in age from five to eighteen and were all still living at home. Jacob listed his occupation as a retail merchant, the owner of a clothing store:

Six years later on October 4, 1916, Jacob Schlesinger died at age 65 from chronic myocarditis and acute cholecystitis, an inflammation of the gall bladder. Rabbi Max Moll, a rabbi from Rochester, New York who was in Johnstown for the high holidays, presided at Jacob’s funeral. (Winograd, p. 80) Jacob left behind his wife Bertha and his six children ranging in age from 12 (Perry) up to Helen, who was 24.  In his will, executed on September 6, 1916, a month before he died, he appointed his wife Bertha to be his executrix and left his entire estate to her. Jacob was buried at the Grandview Cemetery in Johnstown. 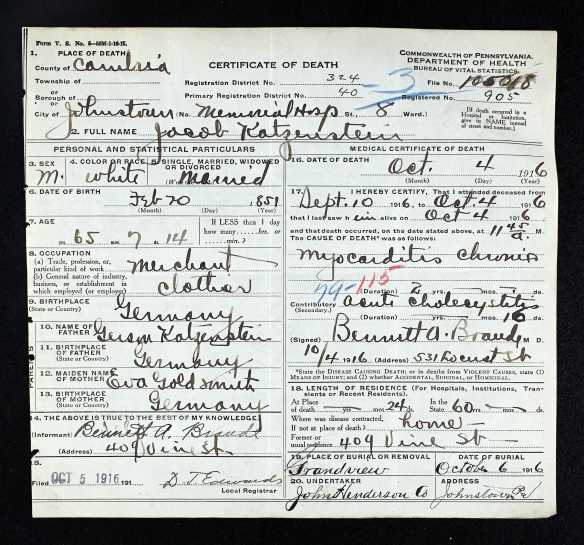 My next post will address what happened to his six children. 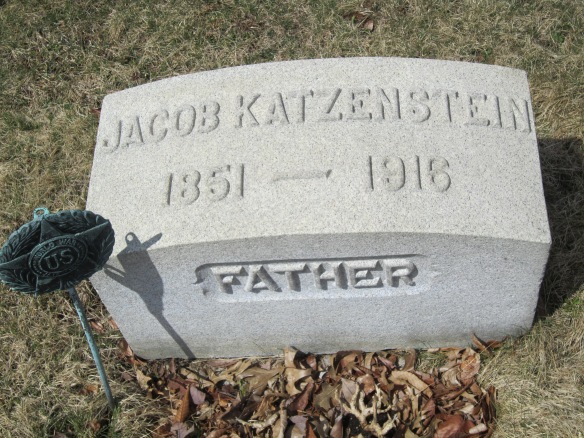 (Does anyone know why that World War I sign would be posted near Jacob’s headstone? He died before the US entered the war so was not a veteran.)

31 thoughts on “Jacob Katzenstein: Before, During, and After the Flood”