As I wrote in my last post, it took the combined efforts of many people to put together the full picture of my Morreau cousins.  Without Wolfgang and the handwritten trees, Shyanne, Michael Phillips, Paul, Dorothee, and Friedemann Hofmann, I never would have been able to find all the names and dates. Dorothee provided the final and essential link to Friedemann Hofmann, who sent me images of the actual records and of the gravestones of the Morreau family, helping me to corroborate the factual assertions I’d seen on secondary sources. Many of the records and images in this post came from Friedemann. Thank you all again for your help!

The records establish that my four times-great-aunt Caroline Seligmann (1802-1876), sister of Moritz Seligmann and daughter of Jacob Seligmann and Martha Mayer, was married to Moses Morreau, son of Maximilian Morreau and Janette Nathan, on October 8, 1830. 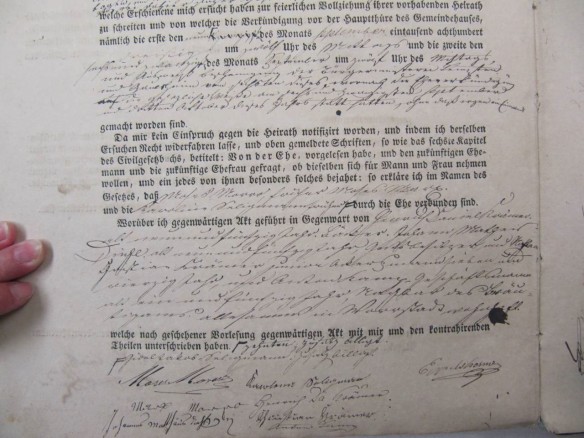 Moses and Caroline settled in Wörrstadt, which is less than twelve miles from Gau-Algesheim where Caroline’s parents lived.

Moses and Caroline had two children, both of whom were born in Wörrstadt: Levi (Leopold), who was born September 25, 1831, and Klara, who was born July 9, 1838. This post will focus on Levi and his descendants; the one to follow will focus on Klara and her family. 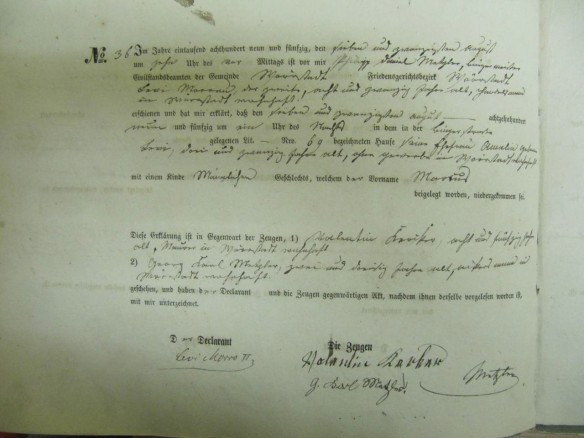 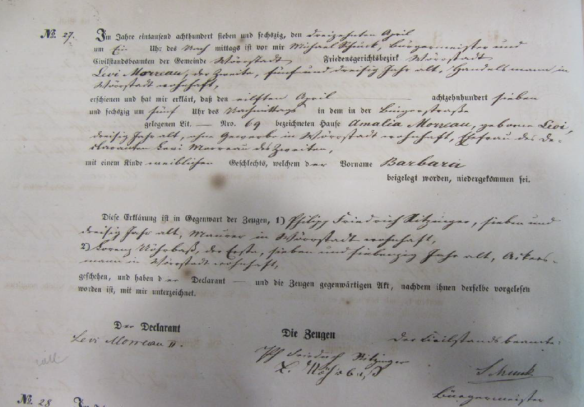 Levi’s mother Caroline Seligmann Morreau died in 1876, and his father Moses Morreau died the following year, both in Wörrstadt. Caroline was 74 when she died, and Moses was 72. 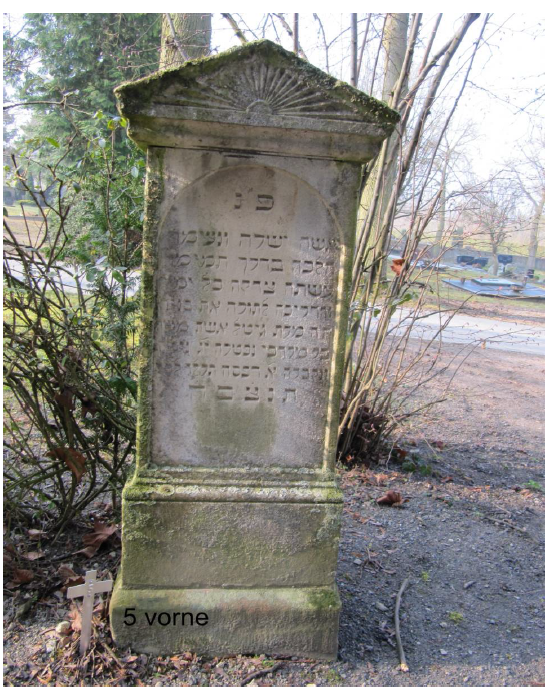 After their grandparents died, both Markus and Albert Morreau left Germany. By 1881, Markus Morreau, the oldest child of Levi and Emelia and oldest grandchild of Caroline and Moses Morreau, had moved to Withington, England, where he was living as a lodger. Markus became a naturalized citizen of England in 1892:

After being in the US for five years, Albert started his own business manufacturing gas lighting fixtures in 1887. In 1893, he married Lea Nora Heller in Cleveland, Ohio.

Meanwhile, Albert’s company, Morreau Gas Fixture Manufacturing, was expanding. It grew from a small three-person operation in 1887 to a company that employed over 150 people by 1910; the company was selling its products throughout the United States and was one of the largest businesses in Cleveland, according to Orth. The company did its own product design and had “a reputation for great excellence.” Orth, p. 844. Thus, Albert Morreau found great success in Cleveland.

As for Albert’s two sisters back in Germany, Barbara/Bertha (generally known as Bertha) married Isidor Aschaffenburg in Wörrstadt on July 29, 1886.  She was nineteen, and he was 36. Isidor was a merchant and was born in Albersweiler, Germany, the son of Rabbi Hertz Aschaffenburg and Nanette Mayer, on December 4, 1849. Isidor and his parents were living in Cologne at the time of the marriage, and Bertha soon relocated to Cologne with her new husband. 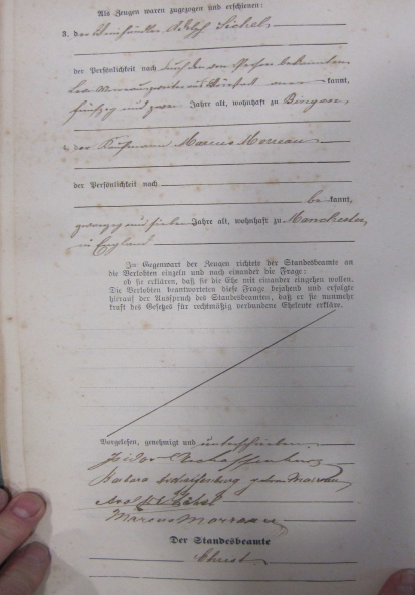 Isidor and Bertha had two sons born in Cologne: Paul, who died before he was a year old while visiting Bertha’s parents in Wörrstadt, and Ernst, who was born July 15, 1890.

Sometime before 1897, Levi Morreau and his wife Emilia and their daughter Camilla Alice (generally known later as Alice) moved to Monchengladbach.  Monchengladbach is located north of Cologne and is about 140 miles from Wörrstadt. Since Bertha and Isidor were living in Cologne, I assume that Levi, Emilia, and Alice moved there to be closer to their daughter and surviving grandson sometime after their grandson Paul died in Wörrstadt in 1888. 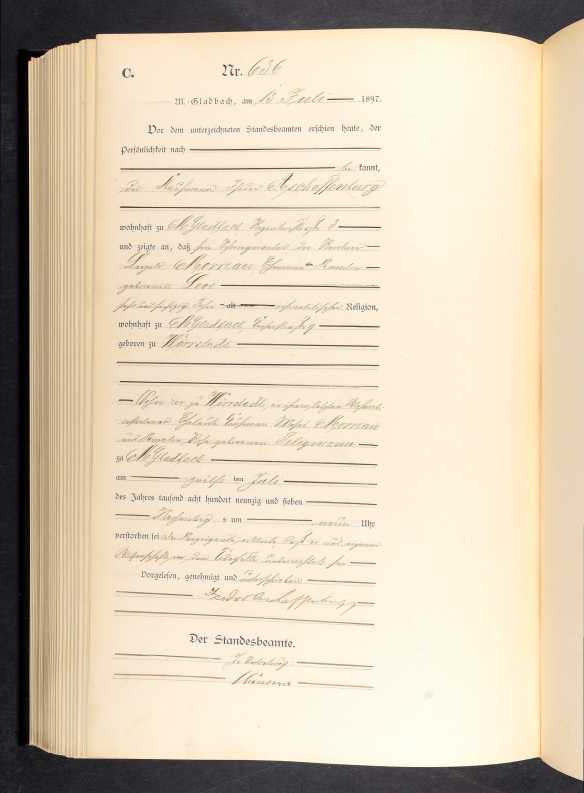 On March 31, 1898, eight months after her father’s death, Alice, the youngest child of Levi and Emilia Morreau, married Otto Mastbaum, a doctor, in Monchengladbach.  Alice was 23, and Otto was 31.  Otto was born in Cologne on May 16, 1866, the son of David and Helene Mastbaum. Alice and Otto did not have children. 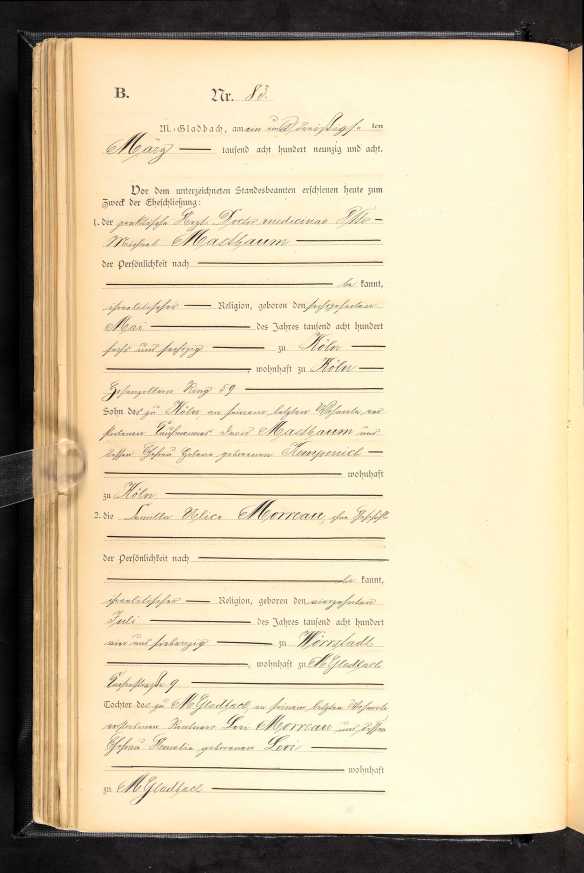 Sadly, both Bertha and Alice were widowed at relatively young ages. Otto Mastbaum, Alice’s husband, died in 1919, according to sources in Cologne; he was fifty-three, and Alice was only 45. Bertha’s husband Isidor Aschaffenburg died on May 26, 1920; he was seventy, and Bertha was 53.

Alice and Bertha remained in Monchengladbach, Germany. They traveled together to the US on the SS Albert Ballen in April, 1924, to visit their brother Albert in Cleveland.

Apparently they also visited in 1925 and toured much of the United States. 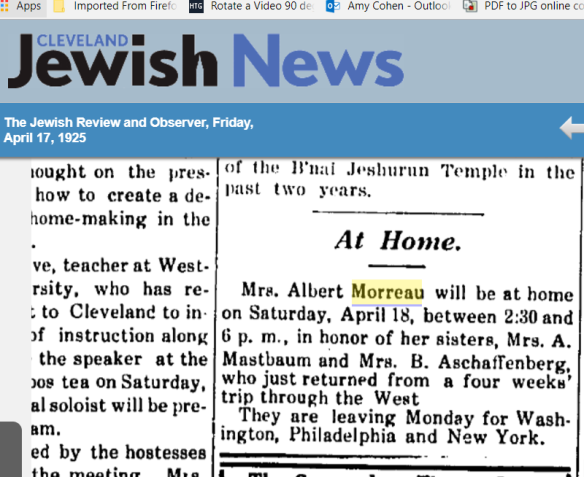 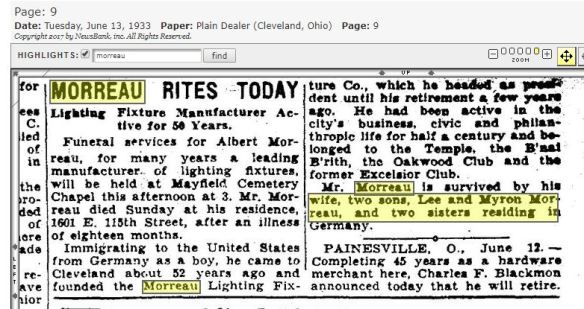 Myron’s first cousin Cecil Morreau, the son of Markus Morreau and Alice Weinmann, also died young; he died in England on March 2, 1939, just a month before his 34th birthday. 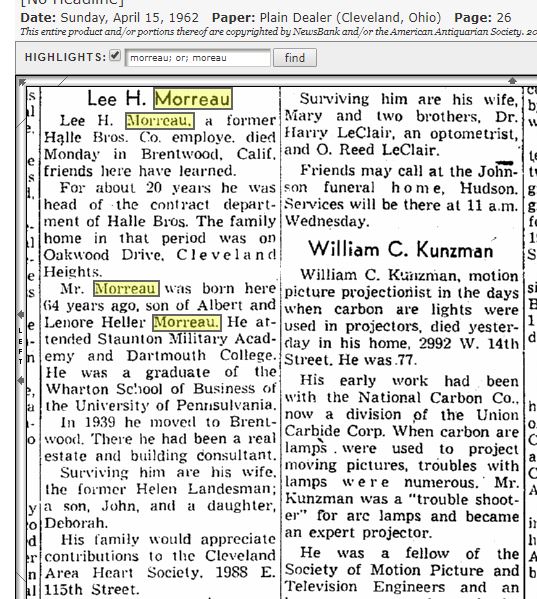 The only grandchildren of Levi Morreau and Emilia Levi who lived past seventy were Rene, who died in 1982 a few months shy of his 80th birthday, and Madeline, who somehow beat the odds in her family and lived to 88, dying in 1996.

Fortunately, despite the fact that so many of Levi Morreau and Emilia Levi’s grandchildren died at relatively young ages, there are living descendants. One of them is my cousin Shyanne, whose comment and research started me on this journey to learn about my Morreau relatives.

The next post will be about Klara Morreau, the daughter of Caroline Seligmann and Moses Morreau.

34 thoughts on “The Morreau Family Discovered, With the Help of Many: Part I”