Before I move on to the remaining children of Jakob Katzenstein and Sarchen Lion, I want to tie up some loose ends from the stories of other descendants.

There was a loose end in the story of Rebekka Ruelf, and in trying to tie up that loose end, I learned a great deal more about Rebekka’s son Hugo David. He was a brave and adventurous man.

As I wrote in my earlier post, Jakob David married my distant cousin Rebekka Ruelf, daughter of Gelle Katzenstein, my great-grandmother’s first cousin. Jakob and Rebekka had one child who survived to adulthood, Hugo. The David family lived in Moringen, Germany, where they owned a textile business. Hugo married Berta Loeber of Alten-Buseck, Germany, and they had a daughter named Margot.

From my research, I knew that Rebekka had died in Moringen in 1929 and that at some point in the 1930s the family had left Moringen for Abbazia, Italy, and then for the United States, where they had settled in Rhode Island in 1940.

What I did not know was the fate of Jakob David. There was no death record for him in Moringen, but also no immigration record for him. Had he died elsewhere in Germany? Where was he buried? I hate loose ends, and although Jakob was only my relative through his marriage to Rebekka Ruelf, I wanted to know what had happened to him.

Although I still don’t have all the answers, I have many. Through the magic of Facebook, I was able to connect with Jakob’s great-grandson Andy. Andy told me that his grandfather Hugo had been quite outspoken in his criticism of Hitler and the Nazis even before Hitler became Chancellor in 1933 and as a result was forced to leave Germany. First, he went to Saint-Raphael, France, which is on the southeast coast of France not far from Cannes. His brother-in-law Martin Loeber was already living there, and together they ran a hotel. Within a year, Hugo’s family joined him, including his father-in-law Jakob, wife Berta, and daughter Margot. In 1935 the French government refused to renew the visas of foreign-born Jews, and so the David family left France for Italy.

I knew from Hugo’s naturalization papers that the family had resided in Abbazia, Italy, before immigrating to the US in 1940, but when I googled Abbazia in Italy, there were a number of places in Italy with that name, and I had no idea how to find out which was the correct Abbazia.  I googled a number of phrases, but the one that finally worked was “Abbazia Jewish refugees 1930s.” I found this website, written by a man named Federico Falk, who was born in 1919 in Rijeka, a port city in Croatia. [1]

At first I was confused (not an unusual state). Why was a man from Croatia writing about a town in Italy? And then I received one of those wonderful benefits of doing genealogy research—-I learned something new about European history. The province in what is now Croatia that includes the two port cities of Rijeka and Opatija were once under Italian control and were then known as Fiume and Abbazia. That is, the Abbazia where my David relatives lived was at that time in Italy, but today is part of Croatia and known as Opatija.

According to the official website for Rijeka, that city was originally settled in prehistoric times and then further developed in the Roman Empire era because of its favorable location: “Given its location on gentle slopes and a narrow coastal zone, abundant with fresh water springs, secluded by a bay having the properties of a natural port, this settlement possessed all the predispositions required for development into a major seaport and trading town.” Then in medieval times, the Croatian people moved into the region.

As the city became more and more strategically and economically important, it also became a focus for conquest by various European nations. At various times the region was under the control of the French, the Hungarians, the Austrians, the Croatians, and then in 1924 in the aftermath of World War I, the Italians. Thus, when Federico Falk was growing up, Rijeka was known as Fiume and was an Italian city. After the war it became part of Yugoslavia and today is in Croatia.

Rijeka or Fiume in 1937
By SpeedyGonsales (self-made from postcard from 1937.) [Public domain], via Wikimedia Commons

Less than ten miles east from Rijeka/Fiume, also on the coast, is the now-Croatian town of Opatija, known as Abbazia during the time the region was part of Italy. Opatija is a Croatian term meaning “abbey,” and Abbazia is the Italian equivalent. The town was named for the church and monastery built there in medieval times in honor of St. Jacob. Like Rijeka, Opatija was very well situated as a port city; an Opatija travel website describes it as “Located at the edge of the Mediterranean, on the slopes of Mount Učka gently descending towards the coast of Kvarner Bay.”

By the late 19th century, Opatija had become a very popular tourist destination and it remains one today:

Director of the Austrian Southern Railway Company Friedrich Schüler and its shareholders wanted to improve passenger traffic to the south. After choosing Opatija as the region’s most promising destination, they started building the first hotel in this new bathing and climatic health resort, advertising it widely as the “Austrian Nice”.

Several important facilities were built alongside the first hotel: a pavilion with indoor pool for warm sea baths, a bathing place with separate areas for ladies and gentlemen, and the 12-kilometre-long coastal promenade from Volosko to Opatija and further to Lovran.

The hotel was opened on the 27th March 1884. Its original name was Hotel Quarnero, and it offered its visitors 60 rooms.

Kings and emperors came to Opatija as well as Isadora Duncan, Gustav Mahler, Giacomo Puccini, James Joyce, and Anton Chekhov, among others.

According to Federico Falk, “The Jews of Abbazia began to settle there at a time when the area was being undergoing a transformation, from a small coastal town into – after 1892 – an elegant holiday and health resort. They used to meet at the Breiner Pension where food was prepared according to kasherut rules. In 1922 they asked to be officially recognised by the autonomous Jewish community and inaugurated their headquarters in a building they owned (Villa Zora).”

Falk continued, “With the rise of Nazism in the ‘30s there was a considerable inflow of Jews who, having fled Germany and its neighbouring countries, were emigrating overseas. Many of them stopped temporarily in Fiume and surrounding areas and were registered as residents, but most of them continued on their journeys towards other destinations.”

And it was to this very important resort city of Opatija/Abbazia that Hugo David and his wife, child, and father came after leaving France. According to the website created by Federico Falk, Hugo David and family arrived on June 6, 1935, and Hugo became the owner of the Pensione Adria. This is the entry Falk has about the David family on his website:

With help from Google Translate, I read this as saying: “Hugo David, son of Jakob David and Rebecca Ruelf, born in Moringen on September 25, 1897, householder and trader (owner of the Pensione Adria). German citizen. In Abbazia from June 6, 1935. Married to Berta Loeber, daughter of Sigmund Loeber and Selma Katz, born in Alten Buseck on August 13, 1903, hotelier. German citizen, in Abbazia since June 6, 1935. Hugo and Berta David have one daughter named Margot, born in Moringen, March 4, 1928, a student. In Abbazia from June 6, 1935.”

Why, one might wonder, would a Jewish family go to Mussolini’s Italy? After all, we know now that Italy became Germany’s ally in World War II.

Italy had not historically been associated with much anti-Semitism, according to an article written by Mary Feltsiner, “Refuge and Persecution in Italy, 1933-1945,” (1997, Simon Wiesenthal Center).  Even after Mussolini obtained power, he did not immediately do anything to persecute the Jews in Italy.

After gaining power, Mussolini’s government pursued a policy of integration toward the tiny group of approximately 40,000 Jews, expecting strict political loyalty from them. Consequently, Italian Jews faced little discrimination until the mid-1930s. In 1930 the Comprehensive Law on the Jewish communities was passed; the statute assured their rights. The Union of Jewish Communities of Italy (Unione delle Comunita Israelitiche Italiane) with an office in Rome, served as the central umbrella organization. Legally there was no obstacle to providing help for other Jews who had emigrated to Italy because of persecution elsewhere.

Thus, when Hugo David and his family arrived in 1935, Italy was still a relatively safe haven for Jews. Andy’s mother Margot said that they were treated well in Abbazia; she attended school and was friendly with both Jewish and non-Jewish students.

But that changed in the fall of 1938 when Mussolini’s government enacted a series of laws that discriminated against Jews; as described by Feltsiner, “persons of Jewish origin, irrespective of their own religious affiliation, were banned from public service; forbidden to attend state schools, universities, and educational facilities; could not enter civil marriages with Aryans; and were prohibited from engaging in a significant part of their economic activity.” See also Paul Vitello, “Scholars Reconsidering Italy’s Treatment of Jews in the Nazi Era,” The New York Times (November 10, 2000) found here.

Feltsiner noted, however, that the policies were not always strictly enforced, were not generally popular among the Italian people, and were not as severe as those adopted by the Nazis.  Margot recalled that even after she was no longer able to attend the public schools, she was still able to attend a Catholic school where the nuns knew she was Jewish and allowed her to be excused from the religious part of the school curriculum.

But although there might not have been as much terror and violence as Jews were experiencing elsewhere, the Italians did start rounding up and arresting Jewish residents; Hugo David was one of those arrested. His wife Berta went to Rome and asked for help from a magistrate who had often stayed at the family’s hotel in Abbazia, and Hugo was released. But the family had to leave within 24 hours of his release, so they left Abbazia and went to Greece and then Portugal. From Portugal, they sailed to the United States, arriving on August 11, 1940, just one month after Italy entered World War II as an ally of Nazi Germany. 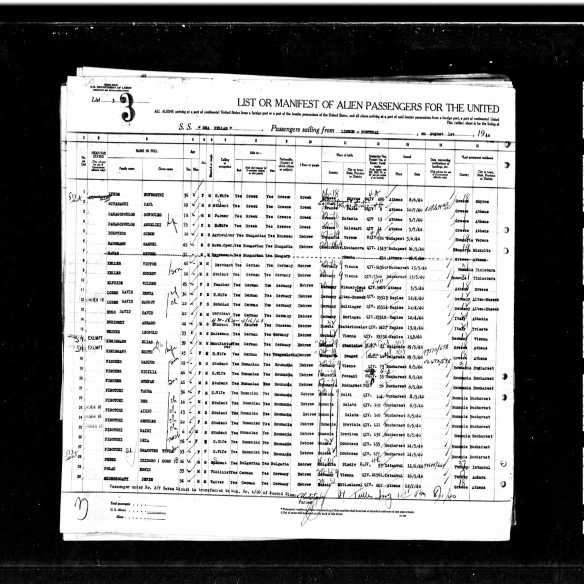 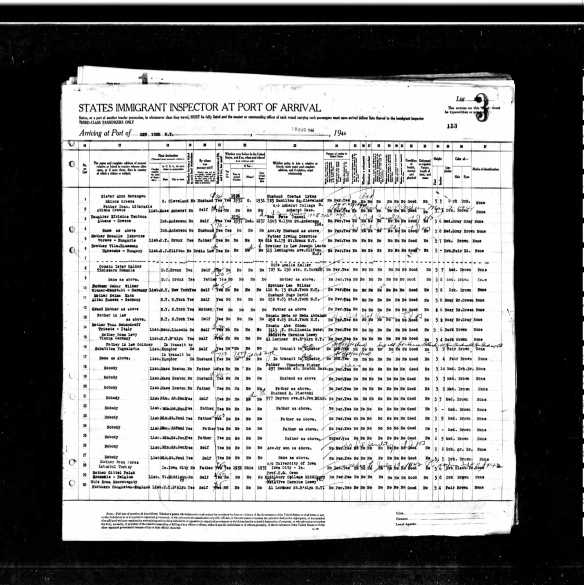 Despite learning this additional information about the lives of the David family between 1933 and 1940, I was unable to find any record of when or where Hugo’s father Jakob David died. In his description of the David family on his website, Federico Falk does not mention Jakob at all. According to Andy, his great-grandfather Jakob David died before the family left Abbazia and was buried in a small hillside cemetery in Matulji, a small town about three miles from Opatija/Abbazia. 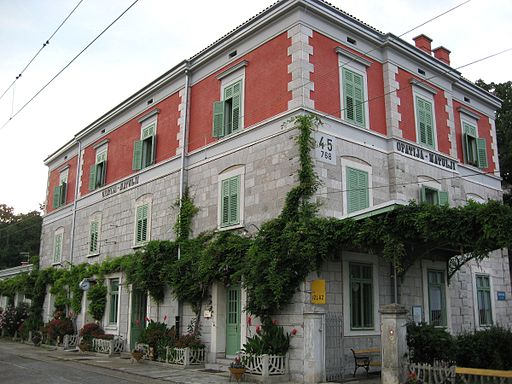 And then Andy sent me this precious photograph of his great-grandparents Jakob David and Rebekka Ruelf with his grandfather Hugo David. Hugo was born on September 25, 1897, so I would say this photograph was taken sometime in 1898.

In addition, Andy scanned the back of the photograph: 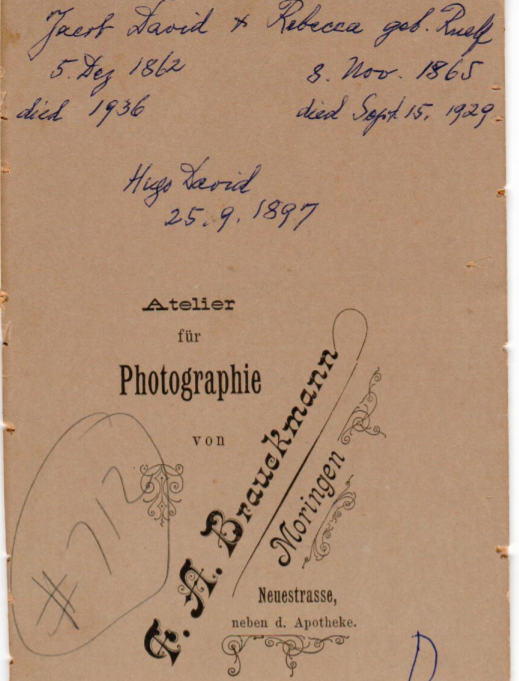 Courtesy of the family

Andy’s mother Margot, the daughter of Hugo David, had written the information on the back of the photo. And it included the year that her grandfather Jakob had died: 1936.

Thus, although I did not find any official records of Jakob David’s death, I did learn where and when he died. More importanly, I learned the story of a very brave and outspoken man, my cousin Hugo David. If Hugo had not been courageous enough to speak out against the Nazis, he would not have had to leave Germany as early as he did. His outspokenness probably saved his family’s lives by forcing them to leave before the Nazis’ full terror began against the Jews in Germany.

28 thoughts on “The Search for Jakob David: A New Story Discovered”