I am now more than half way through the nine children of  my three-times great-uncle Jakob Katzenstein and his wife Sarchen Lion; there are four more to go, and this post will cover three of them: Pauline, Baruch, and Meier. Special thanks to Cathy Meder-Dempsey for her help in translating some of the records in this post.

Sadly, I have very little to report about Pauline. She was born on May 12, 1841, in Jesberg, and died in Jesberg 61 years later on December 27, 1902. She did not marry or have children and presumably lived in Jesberg all her life.

As explained to me by Cathy Meder-Dempsey, the marginal notation refers to the fact that Pauline died without an occupation. She is buried in the cemetery in Jesberg, where I took this photograph of her gravestone.

I am sorry that I do not know more about her life. 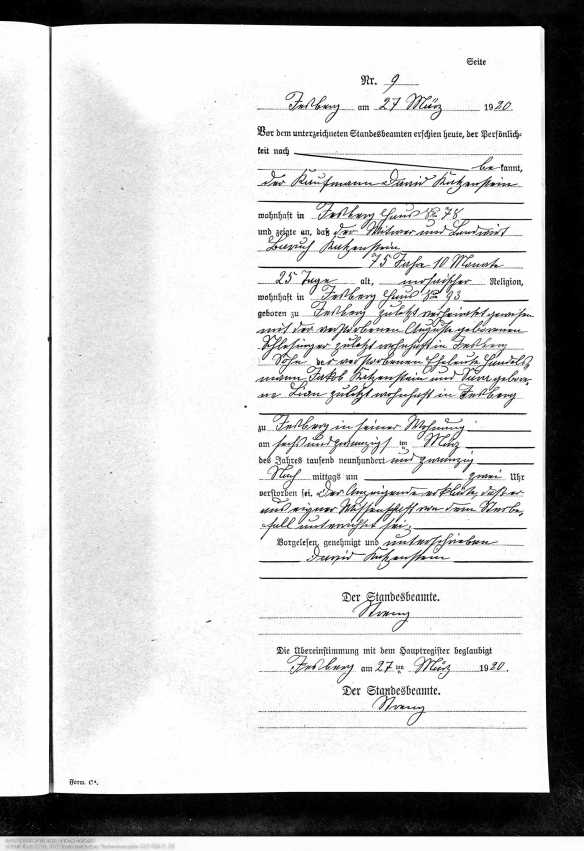 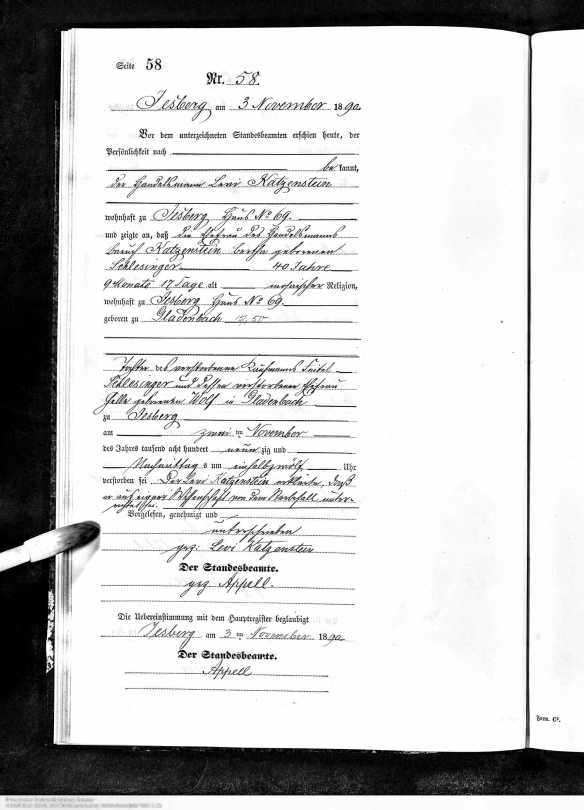 I was able to photograph the headstone for Baruch Katzenstein in Jesberg, but I don’t know where Auguste was buried. She died thirty years before Baruch and before the “new” Jesberg cemetery was being used. She should have been buried at Haarhausen cemetery, where the other Katzenstein family members were buried before Jesberg opened its own cemetery. But there is no record of her burial there on the LAGIS website, nor can I find a record of her burial at any of the other Hesse region Jewish cemeteries. Also, as far as I can tell, she and Baruch did not have any children.

Fortunately I have a little more information about Jakob and Sarchen Lion’s eighth child, Meier, but it is a very sad story.  Meier was born April 26, 1849. Sometime before September 1876, he married Auguste Wolf, who was born on October 27, 1851, in Gladenbach, Germany, to Folk Wolf and Ester Stern.

Six days later, Auguste Wolf Katzenstein died on September 19, 1876, leaving behind her husband Meier and her infant son. She was not yet 25 years old.

How Meier raised the baby for the next year and half is unknown, but then he married again. On May 19, 1878, he married Bertha Spier, daughter of Moses Spier and Roschen Fackenheim. Bertha was born in Raboldshausen on May 13, 1853. 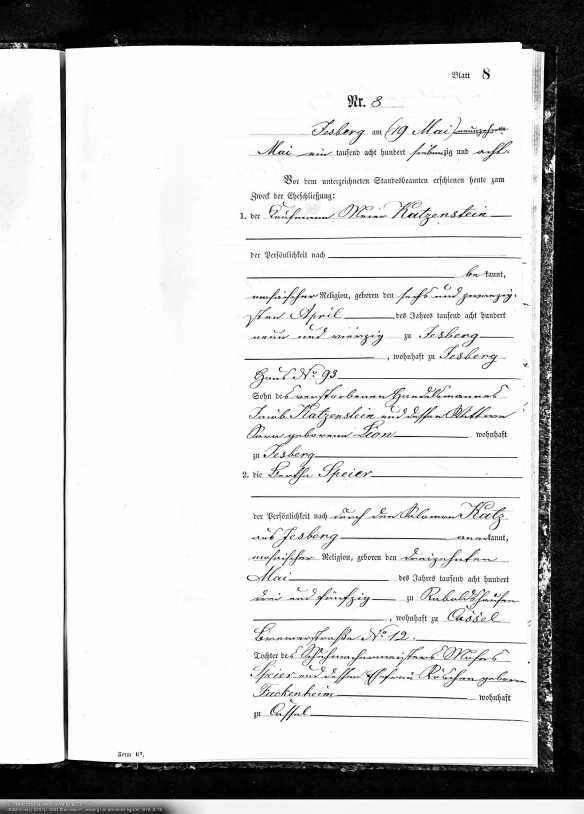 Bertha gave birth to the couple’s first child, a son named Julius, on March 18, 1879, in Jesberg.

It seems too cruel to imagine that in the space of less than five years Meier lost two young wives and a ten-month-old child. He died just three years after Ida and Bertha on September 10, 1884, in Jesberg. He was 35.

Here is his gravestone; unfortunately I did not find it when we were at Haarhausen, so this is from the LAGIS website:

According to the LAGIS website, the inscription reads as follows: “Here lies a righteous man, and upright in all his works, who strove for peace every day of his life. This is Meier, son of Jacob ha-Kohen, from the holy community of Jesberg.”

Meier left behind his two sons, August Felix Katzenstein, who was only eight years old when orphaned, and Julius Katzenstein, his half-brother who was only five years old. Where did these two little boys go after losing both of their parents? Did they go to live with their aunts or uncles who lived in Jesberg or nearby? I don’t know.

In fact, I have no further record for Julius Katzenstein—no marriage record, no death record. I wonder if he was adopted by a relative or another person and took on a new surname. Or did he also die as a child without a recorded death? I don’t know.

August and Rosa had two children: Margaretha Grete Katzenstein (1901) and Hans Peter Katzenstein (1905). All four of them, as well as Margaretha’s husband Rudolf Loewenstein, were deported on April 22, 1942, to a concentration camp in Izbica, Poland, where they were all murdered: Rosa, August, Margaretha, Rudolf, and Hans-Jacob. (All links are to their entries in the Yad Vashem database.)

Thus, unless Julius Katzenstein survived, there are no descendants of these three children of Jakob Katzenstein and Sarchen Lion. Not a single soul alive to pass on the genes and the stories of Pauline, Baruch, or Meier Katzenstein.

That leaves only one more child of Jakob Katzenstein and Sarchen Lion, their youngest child, Levi. Because he had six children, I will tell his story in a separate post.