After the publication of his first book Rabbi and Priest in 1891, Milton Goldsmith contributed a number of essays and short stories to the Philadelphia newspapers. My favorite is “In the Next Century”1 dated August 28, 1892, when he predicted—with tongue in cheek—what life would be like in the year 2000:

Here are a few highlights from this clever and humorous look at the future—or in our case, the past:

It is safe to assume that the world is but in its infancy, and that coming generations will show a vast mental and physical improvement over the present inhabitants of the globe. Our varied knowledge, the wonderful progress on which we are so prone to pride ourselves, will probably appear as absurd to our progeny as the fragmentary information of our forefathers appears to us. Knowledge will be universal, and the inhabitants of our continent will, in the next century, be intellectual giants.

Imagine yourselves transported to the year 2000….What a change greets our wondering eyes. Ignorance appears to be unknown. The child of 5 knows more than the college graduate of the present era. Let us examine the system that has wrought this improvement.  The guide of that year first leads us into the School for Infants. It is here that the babies are taught under the supervision of the government. Competent teachers are appointed the very young idea to shoot. For example, as soon as a child is old enough to drink milk from a bottle, it is taught at the same time the fundamental laws of suction and the principle of the air-pump. Experiments with valves, Torricelli vacuums, etc., form part of the curriculum.

How disappointed my cousin Milton would be. I am far past infancy yet I still didn’t know what a Torricelli vacuum was!

He continued with further examples of how babies and children would be instructed in gravity, zoology, geometry, trigonometry, and other mathematical and scientific concepts. Then he looked at medicine and health in the year 2000:

With a people of such mental caliber it is but natural that arts, science and inventions should prosper. The pleasure and comfort of man is greatly enhanced by the numerous devices invented for his welfare. Principal among these are the appliances for fostering the health of the community. Sickness is absolutely unknown. The medical fraternity, having discovered the germ of each disease, have at the same time provided an antidote for such germs. At the age of 2 months the child is vaccinated against tuberculosis. At the age of 3 months against cholera; at the age of four months against smallpox, and so on at regular intervals against all the diseases in the modern doctor books.

Here, Milton has done a better job of prognostication; we do have vaccines against smallpox and tuberculosis and many other diseases. But alas, we certainly have not eliminated all diseases.

Milton went on to describe, with tongue in cheek, the extreme measures that would be taken to prevent the reintroduction of germs into society—“Before a mother kisses her child she cleans her teeth and lips with an antiseptic solution. All water is boiled, and all milk sterilized before it is taken.”

He then takes this notion and applies it to the way adults will behave in the year 2000.

When the boy or girl reaches the age when matrimony appears a consummation devoutly to be wished, there are no haphazard marriages as in former days.  The partner to be chosen is carefully examined by a psychologist, a pathologist and a phrenologist, and every peculiarity of mental or physical structure carefully noted.  Only such parties who are perfectly sound and whose peculiarities are fitted to one another, are allowed to mate. Such a thing as an unhappy marriage, or a divorce, are as a matter of course impossible. Sick or weakly offspring are unknown.

What would Milton think of couples meeting through online dating? Of our over 50% divorce rate? Of birth control and premarital sex?

He then discussed married life:

The intelligent groom knows that promiscuous kissing is injurious; that each kiss, acting upon the sensitive nerves of touch, are apt to create a depletion of nervo-vital force. He therefore limits his kisses to two a day. The lips are carefully disinfected before and after each osculations.  …. The groom retires promptly at 10 o’clock, as sufficient sleep is found to be more important than making love.

Imagine Milton watching some of the movies or television shows of our era. What would he think?

Finally, Milton reached his conclusions about life in the year 2000:

As a result of this wonderful system sickness is unknown in the community. People live to the normal age of 100 years and then die suddenly without a struggle. The remains are immediately cremated, the ashes disinfected and buried ten feet in the earth.

Taking it all in all one is almost glad that this happy time has not yet arrived, for though we may have more disease than the possible inhabitant of A.D. 2000, we have a great deal more fun.

Ah, Cousin Milton, how wrong you were! We are still having a lot of fun, probably more than your generation did, as we have fewer diseases, more leisure time, looser social mores, and all the amazing toys that modern science has given us.

I loved the satiric tone of his essay.  And I also loved the sense that while I am now looking backward to learn about the life that Milton led as a young man in the 19th century, in 1892 he was looking forward to the future to imagine what life would be like for his descendants in the 21st century. 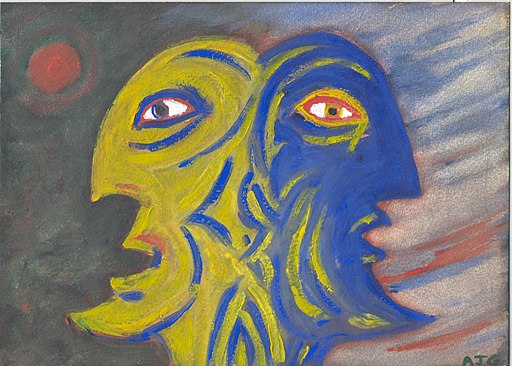 By Tony Grist (Photographer’s own files) [CC0], via Wikimedia Commons

Milton’s creative output in the 19th century was not limited to short stories and essays. In December 1893, Milton’s burlesque entitled “Jay Cesar, Esq.”—which he wrote and acted in—was performed by the Stag Opera Comique Company in Philadelphia. According to the Philadelphia Inquirer, “it was a distinct success from every standpoint and from a social standpoint it was decidedly the leading event in Hebrew society this season so far.”  The performance consisted of two hours of “catchy airs, humorous songs, fantastic dances and whimsical dialogue.” 2

Milton was obviously a very talented young man.  The 20th century would find him leaving behind his life as a merchant and making a new career in a new city.  I wonder what he would have predicted for his own future when he wrote “In the Next Century” in 1892.