The next three posts will conclude the saga of the Basch family of Columbus, Ohio. This post will complete the stories of Frank and Hinda; Joel and Joseph will be discussed in subsequent posts.

Lewis Basch, Frank and Freda (Rosenthal) Basch’s son, married Maryleone Freund on June 30, 1931. Maryleone was the daughter of a rabbi, Charles J. Freund, and Elizabeth “Bertie” Oberdorfer. She was born in Salt Lake City, Utah, on November 29, 1910, but also lived in Grand Rapids, Michigan. In 1930 she was living with her parents in Toledo, Ohio.1

After marrying Lewis, Maryleone completed her undergraduate degree at Ohio State University. Lewis and Maryleone would have two children in the 1930s.

Just three months after her brother Lewis’ wedding, Coryne Basch, Frank and Freda’s daughter, died at age 33 from appendicitis on September 27, 1931.  According to her death certificate, Coryne was the owner of a kindergarten. Coryne was survived by her parents, her sisters Rae and Ruth, and her brother Lewis. She had never married or had children. 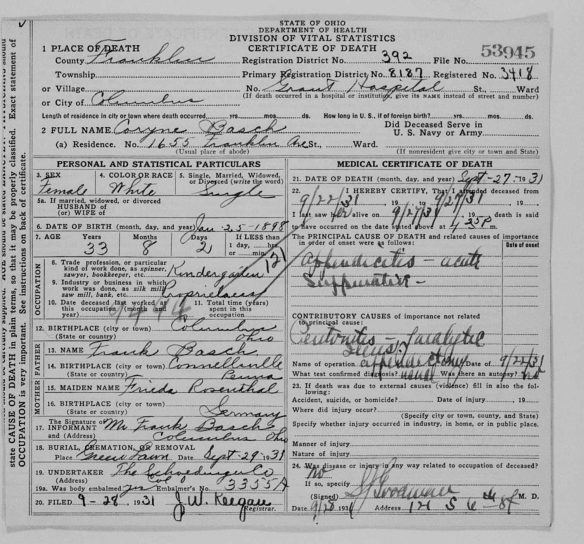 Frank Basch died on January 5, 1934, in Columbus, from coronary disease and hypertension. He was 76 years old. With his death, only three of his siblings remained.

In 1940, Frank’s three surviving children were all living in different places. Lewis and his family were living in Bexley, Ohio, a suburb less than four miles east of Columbus. Lewis was a dentist in private practice.2 His sister Rae was living with her family in Chillicothe, Ohio, fifty miles south of Columbus; her husband Sidney Katz continued to be a clothing merchant.3  Ruth and her husband Sigmund Front and their children were living in Wheeling, West Virginia, in 1940, where Sigmund was managing an electrical supply store.4 Sigmund’s 1942 World War II draft registration revealed that he was no longer working in his father’s Front Company business, but for Westinghouse. I could not locate Freda Rosenthal Basch, Frank’s widow, on the 1940 census.

Freda Rosenthal Basch died on September 16, 1954, twenty years after her husband Frank. She was 85 years old.7

Ruth Basch Front’s husband Sigmund died in Wheeling, West Virginia, on November 2, 1960. He was 66.8 Ruth later moved to Florida, where she died at age 83 on June 1, 1988. Ruth and Sigmund were survived by their two sons.9

Tragically, Lewis Basch lost his son Richard, who, like his father, was a dentist, on July 3, 1970, when Richard was killed in a car accident after his car crossed the median on the Kentucky Turnpike and struck another vehicle. Richard was only 33 and was survived by his wife and two children.10

Lewis Basch and his wife Maryleone remained in the Columbus area, and Lewis died there on July 5, 1986, when he was 86 years old.11 He was survived by his wife Maryleone, who died at 90 on February 14, 2001, in Columbus.12 Their daughter survived them as well as their grandchildren.

In 1940 Hinda Basch was living alone in Columbus without an occupation.13 She died four years later on June 23, 1944, from hypostatic pneumonia and myocardial degeneration. She was 83. She was survived by her brothers Joel and Joseph and a number of nieces and nephews. She had no direct descendants. 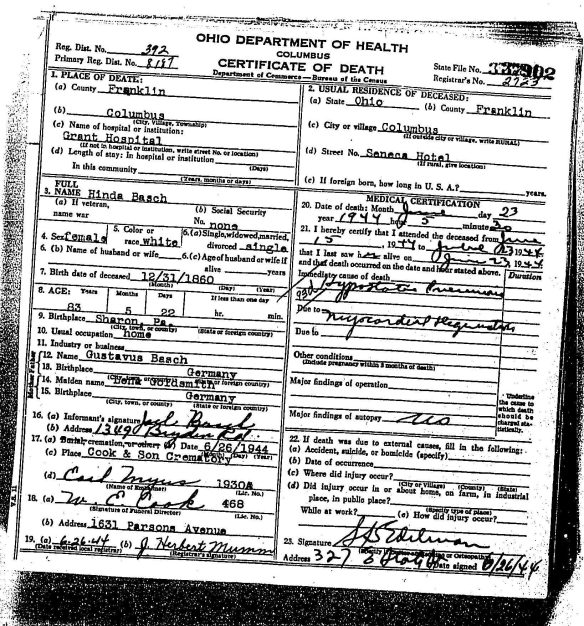